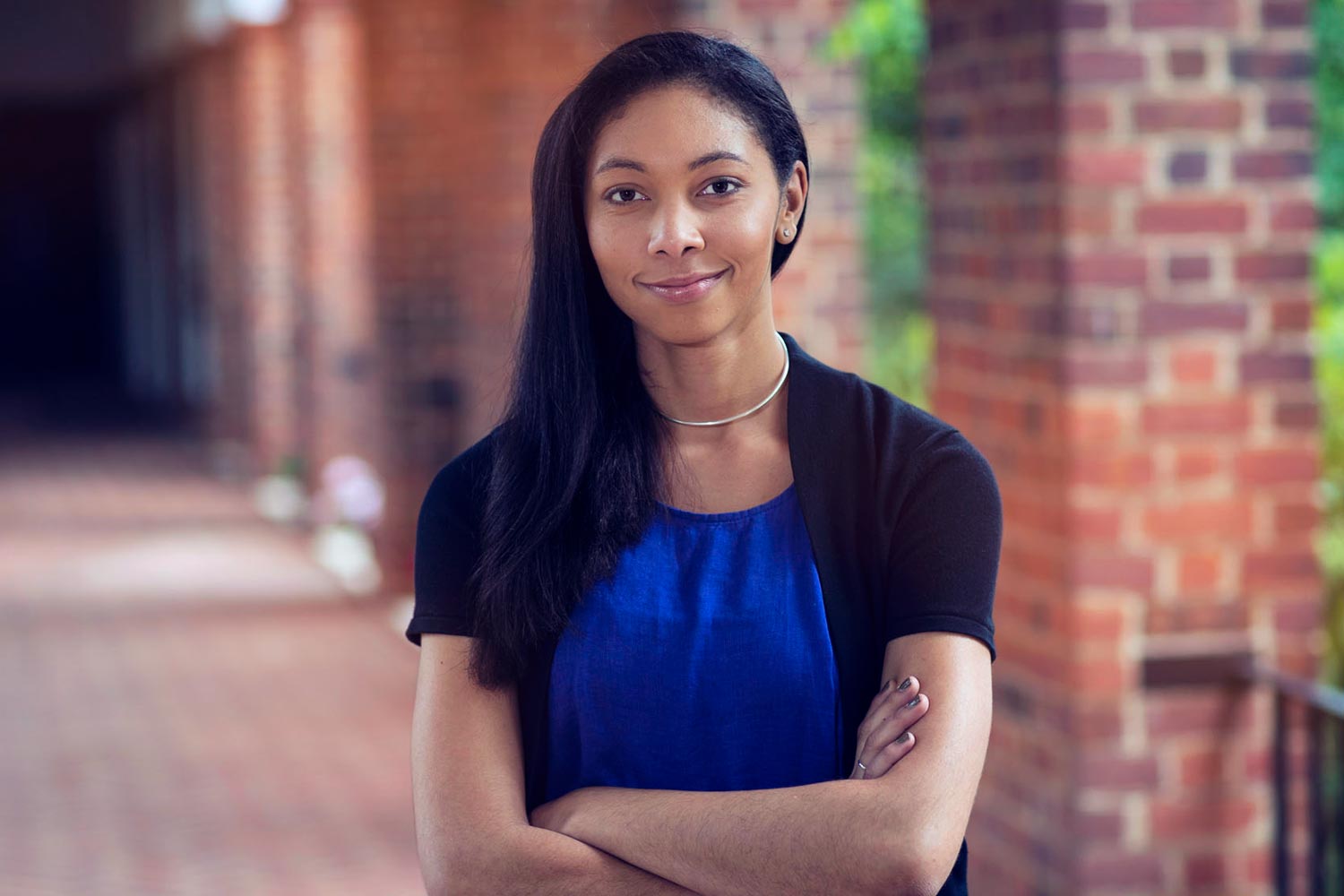 In Gyumri, Armenia, about 4,000 survivors of a 1988 earthquake that destroyed their city are still living in uninsulated shipping containers. Their improvised shelters are susceptible to flooding when it rains and, because of the moisture, infested with mold.

Engineers a half a world away can help solve these problems through virtual reality, according to Bethany Gordon, a first-year Ph.D. student in civil engineering at the University of Virginia.

“Virtual reality can give you an understanding of someone else’s world in minutes,” Gordon said in a podcast that won an international competition this summer. “It’s not a perfect understanding, and maybe you are not aware of all the cultural nuances, but … you can make that connection in five minutes by sitting on your couch and looking through a $10 virtual reality viewer.”

Gordon, of Richmond, entered the contest – sponsored by the Department of Science, Technology, Engineering and Public Policy at the University College London – while attending the Global Grand Challenges Summit in Washington, D.C. in July. The summit was organized by the Royal Academy of Engineering and its American and Chinese counterparts, and drew hundreds of science and engineering professionals and students from across the three hosting countries.

Addressing the contest’s theme, “How Engineers Can Change the World,” Gordon offered the idea that engineers can use virtual reality to explore problems in remote areas without having to travel there.

In her podcast, Gordon also cited the work of Pablo Suarez, associate director of research and innovation at the Red Cross Red Crescent Climate Centre in the Netherlands. Suarez, who teaches at the University of Lugano, University College London and Boston University, sees the potential of virtual reality in increasing awareness of projected threats against people in the future.

“Virtual reality can create a genuinely immersive experience, where your senses are exposing your mind and soul to a reality that is not your reality,” Suarez said on her podcast. “We call it ‘virtual,’ but it can be very real and realistically convey the threat that happened from a flood that happened in Togo, downstream from a hydropower dam, all the way to the meeting of Arctic sea ice. Virtual reality offers a magical way to connect what we know with what we can do.”

Gordon, who received her undergraduate degree in civil engineering from UVA in May, wants to integrate virtual reality into her research, which involves developing sustainable design interventions for civil engineers using behavioral science and neuroscience. Gordon is starting to explore the idea that increasing the blood flow to the parts of an engineer’s brain dealing with empathy will produce more sustainable designs. Gordon is also working on the hypothesis that the later in the process an engineer commits his or her design to a model, the more willing the engineer is to change the design.

“I hope to focus specifically on sustainable development in resource-restricted communities,” she said. “It combines many of my passions – civil engineering, neuroscience, sustainability and virtual reality. There are many practical applications for virtual reality that will emerge as it becomes more accessible – the potential of an immersive, non-intrusive environment has a lot of potential.”

Gordon believes that virtual reality can be used to prevent problems and save lives.

“Virtual reality connects what we know with what we can do,” she said, echoing Suarez. “The knowledge of an engineering professional and the ability to approach problems in a systematic way can be applied to people who may be living in unhealthy situations, or struggling to survive.”

She cited Rajiv J. Shah, president of the Rockefeller Foundation, who spoke at the 2017 Global Grand Challenges Summit, where he urged the audience not to be moral bystanders, but to be moral leaders – to take initiative and solve the problems of those who are often forgotten.

“It is our moral obligation as people who possess this knowledge to not forget about the problems of our poorest global citizens,” Gordon said in the podcast. “And yet it is easy for that sentiment to bleed into the background of our many other important obligations, such as work and family. Virtual reality has the potential to change that.”

Gordon said she attended the Global Grand Challenges Summit to have in-depth conversations with thought leaders and other students in engineering. “I wanted to exchange ideas in the hope of building potential collaborations or coming up with impactful ideas. I found myself constantly in deep thought about how the speaker’s wisdom related to the issues I was hoping to learn more about,” she said.

Gordon’s podcast bested a field of 150 contestants. She and the second place-winning team, Yun Gu of Peking University in Beijing and Katie Brown of Auburn University, will receive fully funded attendance at the next Global Grand Challenges Summit in London in 2019, organized by the Royal Academy of Engineering.

“It is our moral obligation as people who possess this knowledge to not forget about the problems of our poorest global citizens.”

Gordon’s mentor, Leidy Klotz, an associate professor of civil and environmental engineering and architecture at UVA, praised the graduate student for her drive and creativity.

“Bethany is a uniquely creative engineer who is not afraid to seek insight from other disciplines in her quest to help people,” Klotz said. “She combines her creativity and intelligence with an unmatched work ethic. I am so fortunate to have the opportunity to work closely with Bethany over the next few years, and I look forward to seeing the massive contributions I am sure she will continue to make in her life’s work.”

A graduate of the Episcopal High School of Alexandria, Gordon plans a career in academia, teaching, mentoring and performing research that revolves around humanitarian aid, accessible sustainability and built environment design in resource-restricted communities.

Do You Know the History of Your Favorite Corner Spots? END_OF_DOCUMENT_TOKEN_TO_BE_REPLACED

Netflix to Add Ads. Why This Could Be a ‘Game-Changer’ for Your Viewing Experience END_OF_DOCUMENT_TOKEN_TO_BE_REPLACED

What’s Next for UVA’s Class of 2022? END_OF_DOCUMENT_TOKEN_TO_BE_REPLACED