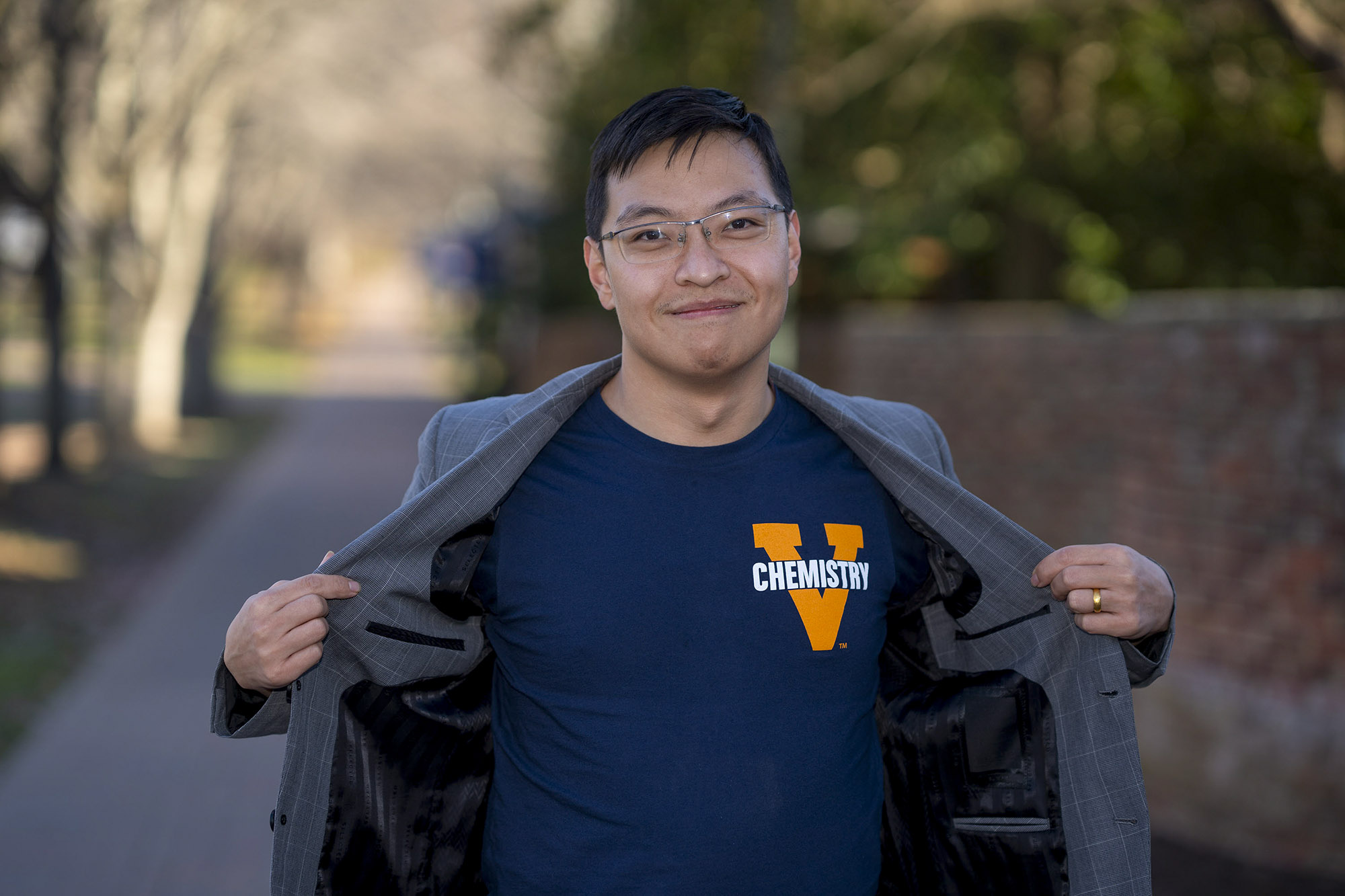 A professional society has recognized a University of Virginia chemistry graduate student for his work in splitting water molecules to generate clean hydrogen fuel.

Doctoral student Chang Liu is working with a team led by Sen Zhang, assistant professor of chemistry, that is focused on developing functional nanomaterials for catalytic and renewable energy applications.

For his contribution to the work, Liu has received a 2021 Graduate Student Silver Award from the Materials Research Society, which “encourage(s) graduate students whose academic achievements and current materials research display a high level of excellence and distinction,” according to the society’s website.

“This award is a big encouragement for me with a recognition of my research achievements in the past five years,” Liu said.

Zhang and Liu are part of a team, in a partnership with Brent Gunnoe, Commonwealth Professor of Chemistry, using catalysts to drive water molecules splitting into hydrogen and oxygen – a process that has existed, but generally uses precious metals as a catalyst, making it expensive and cost-ineffective.

“Chang developed a new material, named ‘single atom catalyst’” Zhang said. “It is cobalt, just one atom, and it disperses on the surface of titanium oxide. Titanium oxide is a pretty common and earth-abundant material and broadly used, such as in paints, coatings, cosmetic materials, ceramics and water treatment materials.”

Zhang said using the cobalt and titanium, both abundant materials, reduces the cost of splitting water molecules and should increase the energy efficiency on a larger scale. Zhang added that if they used solar-generated electricity for the process, it would generate clean fuel hydrogen that is promising for zero-carbon emission.

“The solar energy can be converted into electricity using solar cells — photovoltaics. When this electricity is used to split water into hydrogen and oxygen, you are storing the energy in the hydrogen fuel,” Liu said. “Then you can use the hydrogen to generate electricity when needed. In this cycle, there is no carbon produced at all.”

Liu has published more than 20 research papers in journals in the field, has served as a student committee member in the Virginia Clean Energy and Catalysis Club.

Liu, of Gansu Province, China, received his undergraduate degree from South China University of Technology. At UVA, he has received a graduate research grant from the Graduate School of Arts & Sciences, the Adam Ritchie Award for Outstanding Graduate Student in Chemistry, and has been a Jefferson Dissertation-Year Fellow.

Gunnoe said he has been very impressed with Liu’s work.

“As a collaborator with my group, it has been a pleasure to work with Chang,” Gunnoe said. “As a graduate student, Chang has been successful in every endeavor, including his coursework, as a teaching assistant and as a researcher. Chang is a careful experimentalist with high scientific standards, and he is a dedicated researcher who brings a great interest in learning and a strong work ethic to his projects.”

Liu, who has finished his Ph.D. dissertation defense and will graduate in the spring, will join professor Thomas Mallouk’s lab at the Vagelos Institute for Energy Science and Technology at the University of Pennsylvania in February as a postdoctoral researcher.

“Chang’s scientific and professional interests are focused on advanced new materials to enable scaled use of renewable energy sources,” Gunnoe said. “In his new position as a postdoctoral researcher, I am confident that Chang will continue to innovate impactful new fundamental science relevant to alternative energy technologies.”

“I will spend most of my time in the spring to start new projects with my postdoc adviser,” Liu said. “But I also will process and analyze data for my current ongoing projects and help make a smooth transition and takeover for my other teammates.”

“He is a wonderful team member and a natural team builder,” Zhang said. “We all enjoy working with him.”

Zhang, who has been working on this for five years, says the scaled use of green hydrogen production technology is at the core of clean energy future. He said his team is focused on one central part of the technology, developing low-cost catalysts to efficiently produce green hydrogen.

“Chang’s study is an important step in understanding how to design materials to accelerate the hydrogen production rate and efficiency,” Zhang said. “It tells us how this reaction happens over a catalyst and, more importantly, how to control the catalyst to achieve the optimized chemical reaction for hydrogen fuel production.”

It’s Copperhead Season in Virginia. Here Is What You Need to Know END_OF_DOCUMENT_TOKEN_TO_BE_REPLACED

What’s Next for UVA’s Class of 2022? END_OF_DOCUMENT_TOKEN_TO_BE_REPLACED