What Do Diane Sawyer’s Hair and Moon Rocks Have in Common? 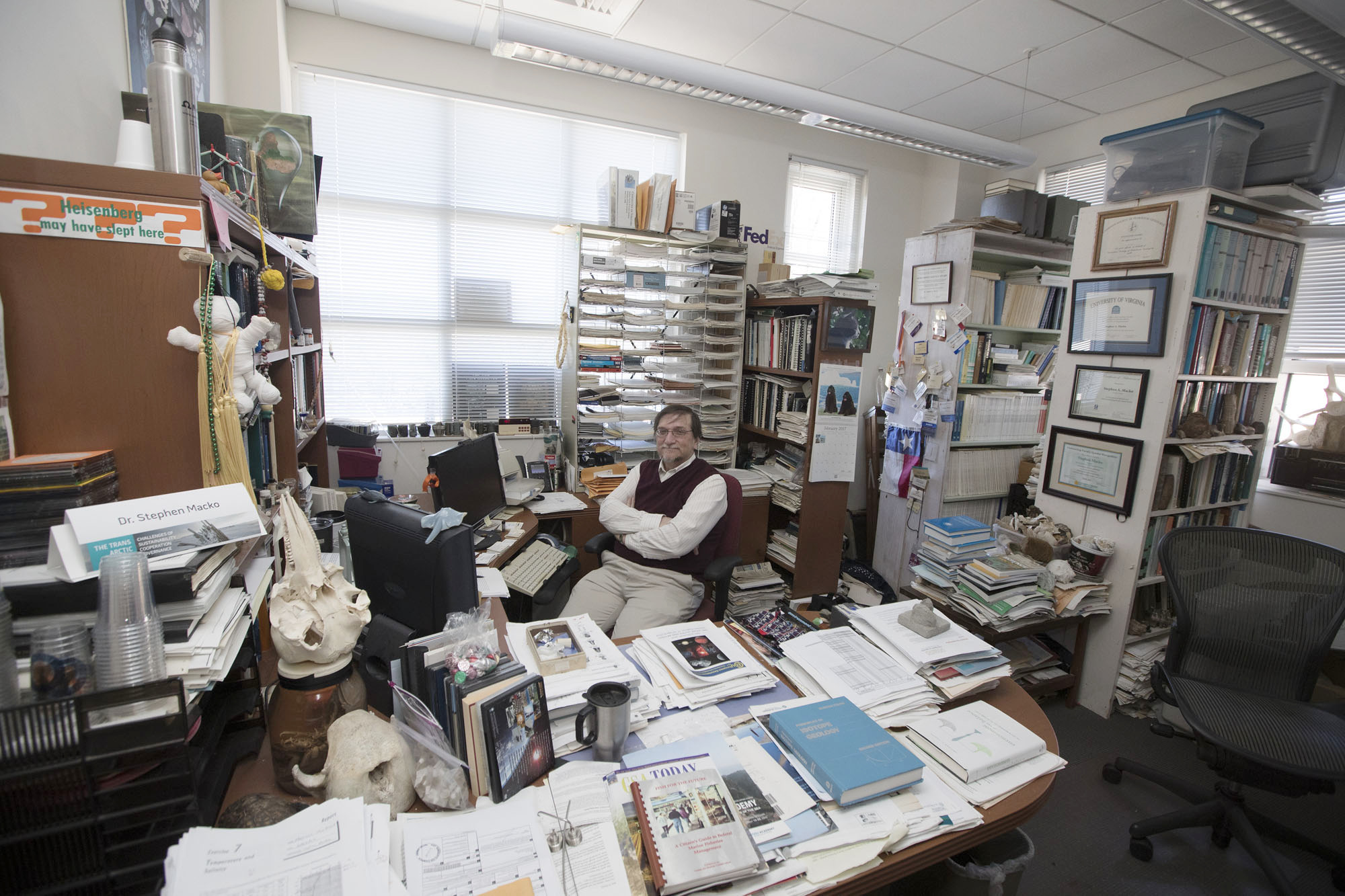 Welcome to the Macko Museum of Natural History.

It’s not particularly well-catalogued; in fact, it could be described as controlled chaos, though its namesake curator can readily identify and find all of its curiosities – dinosaur bones (and fossilized feces), meteorite fragments, whale bones, really old Earth rocks, nautilus shells, turtle shells, corals and the like – all buried as treasure among stacks of books and papers on his desk, the floor and shelves. The books cover a range of topics on natural and human history.

The “museum” is the informal collection of a lifetime of work of a very active and curious-minded researcher and teacher who has been around the world many times, and even to the bottom of some of the deeper locations in the ocean.

Stephen Macko is a geochemist in the University of Virginia’s Department of Environmental Sciences, and the museum is his office. He charges a “very nominal fee for admission” (free), although the price is likely to include long, free-ranging discussions about the very topics that have kept him fascinated since he first discovered the wondrous workings of the natural world as a child in Texas. 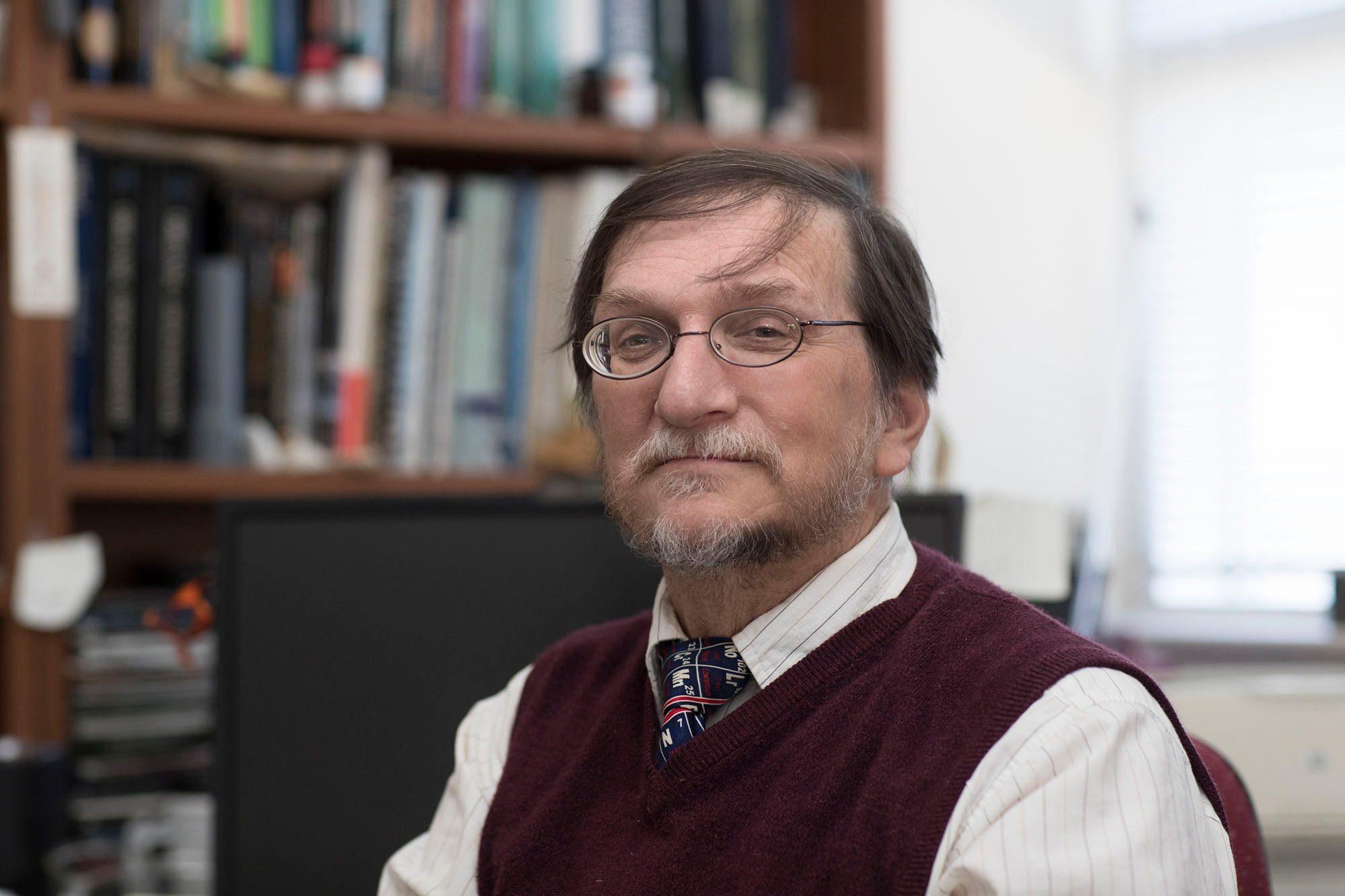 “I’ve always been curious,” he said. “I built my first chemistry set from old light bulbs and battery acid when I was still quite young. Fortunately, I had very tolerant parents.” He never blew up anything, but he did make perfume.

As a college freshman, Macko learned glassblowing, as well as metalworking and woodworking so he could build devices for use in experiments of his own design. He still remembers the professor who guided him, Dr. Fugassi, and the schoolteachers who originally inspired him: Mrs. Hess, Mr. Horne and Mr. Bonekemper. “They encouraged me to do things, which is how people learn,” he said.

“There’s actually a family tree of chemists in America that can be traced back to our country’s early history,” Macko said. “It branches out, and I’m part of that, as a researcher and a teacher. It has been passed on to me, and I try to pass that heritage on to my students. Teaching and research are intimately linked.”

The recipient of an All-University Teaching Award, Macko has taught thousands of undergraduate students during his 27 years at UVA. He also has inspired more than 65 graduate students to earn master’s degrees and Ph.D.s, and mentored many more researchers as undergraduates in his lab or as postdoctoral fellows. Each day he carries his long research experience into the classroom and lab to challenge his students’ curiosity.

“Steve is a world-class researcher and also a dedicated teacher,” said former graduate student Lixin Wang, now an assistant professor of earth sciences at Indiana University-Purdue University in Indianapolis. “Steve shows great passion, and he is optimistic and humorous. Besides laying out solid foundations through classroom teaching, Steve encourages and inspires his students to do better in the lab every day. I have wonderful memories of working with him.”

Wang attributes his own success as a researcher – dozens of published papers, some when he was a graduate student under Macko, and a National Science Foundation CAREER Award – to the “roots” he grew in Macko’s lab.

The lab is devoted to mass spectrometry, a tool and a science that Macko uses to investigate the molecular structures of objects, from moon rocks to ancient human artifacts. Over the years he has analyzed the hair of George Washington, ancient mummies of Egypt and Chile, Jamestown colonial residents, and most famously, the hair from the 5,200 year-old “Ice Man” found in the Oetztal Alps. He has even analyzed his students’ hair, which reveals the contents of their diets. 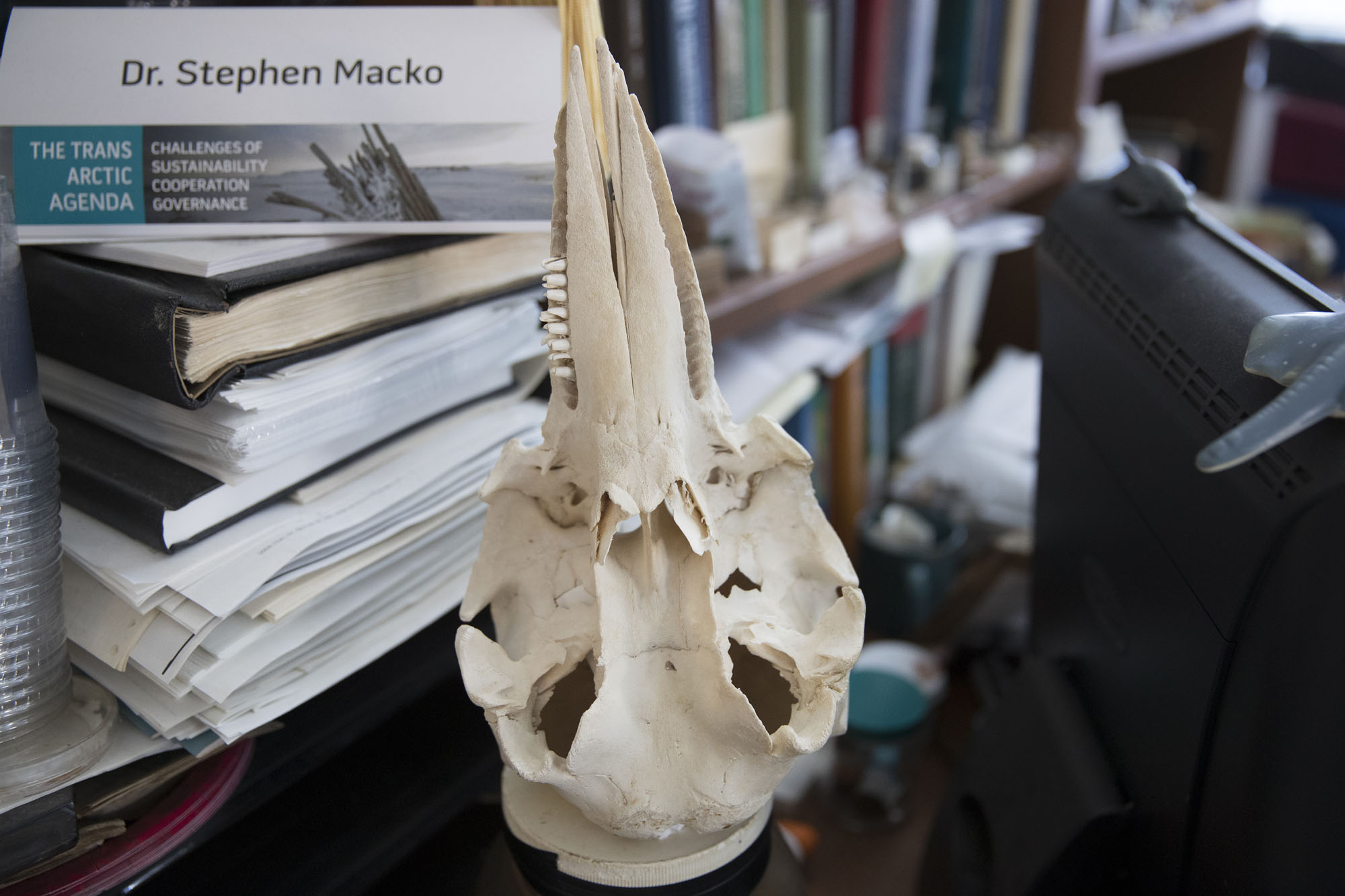 Macko once provided analysis, on live TV, of the hair of “Good Morning America” host Diane Sawyer (he found that, like most Americans, she consumes a diet that includes a lot of corn). That was after he appeared as an expert consultant in a popular 2008 PBS documentary film, “King Corn,” that chronicled the many ways Americans consume the grain, even unknowingly.

Known by some as “the hair detective,” Macko commonly gives wide-ranging talks to civic groups, senior citizens, schools and museums. His research interests, as well as his subjects, are eclectic: fossils, meteorites, fossil fuel origins, the conversion of organic sediment to sedimentary rock, the deep ocean cycling of carbon and nitrogen, climate change, organic pollutants and the laws involving the seas.

He teaches classes on many of the same subjects. One of his most popular is a January-term class, “Future of the Oceans,” that focuses on the sustainability of the seas’ resources.

“I want my students to understand how we use our precious resources, and how we might sustainably use them,” Macko said. “Our students are future leaders. Some will be policymakers; some will run companies. I want them to have some perspective when they make decisions that will affect all of us. It’s important to me that each class I teach is a class they will keep for the rest of their lives.”

“Professor Macko’s unique perspective and enthusiasm for geoscience makes him one of UVA’s most influential professors,” said Ruth Dimon, a third-year environmental sciences student who is co-president of UVA’s Environmental Science Organization. She has taken two of Macko’s oceanography-focused classes, including the J-term course.

“His lecture style is informative and engaging, as he encourages class participation,” Dimon said. “In addition to discussing the history behind the science, which provides important contextual background, Professor Macko places a lot of emphasis on current events and modern discoveries. He shows real-life examples and applications to illustrate the concepts he teaches, and he asks for student feedback to make sure we are understanding the material. This shows that he wants us to succeed and is willing to take the time to explain concepts in more depth for those who may be struggling.”

Macko’s favorite teaching method is hands-on experience. In his “Future of the Oceans” class, he takes his students on a 600-mile, four-day journey to a huge national seafood distribution center in Maryland, the National Aquarium in Baltimore, the very basement of the Smithsonian’s Natural History Museum for a behind-the-scenes tour (the curators there know him well), the American History Museum in Washington, and the Virginia Aquarium and Marine Science Center in Virginia Beach. Macko schedules out every minute of that 10-day class. He even brings in guest speakers to the classroom, including fish aquaculturists and Chesapeake Bay watermen.

He’s always got something to show off. His newest favorite item is a recently acquired, 200-pound drill bit from a scientific drilling ship. It’s been to the bottom of the deep sea, acquiring sediment core samples. He intends to use it as a showpiece for future discussions on geology. 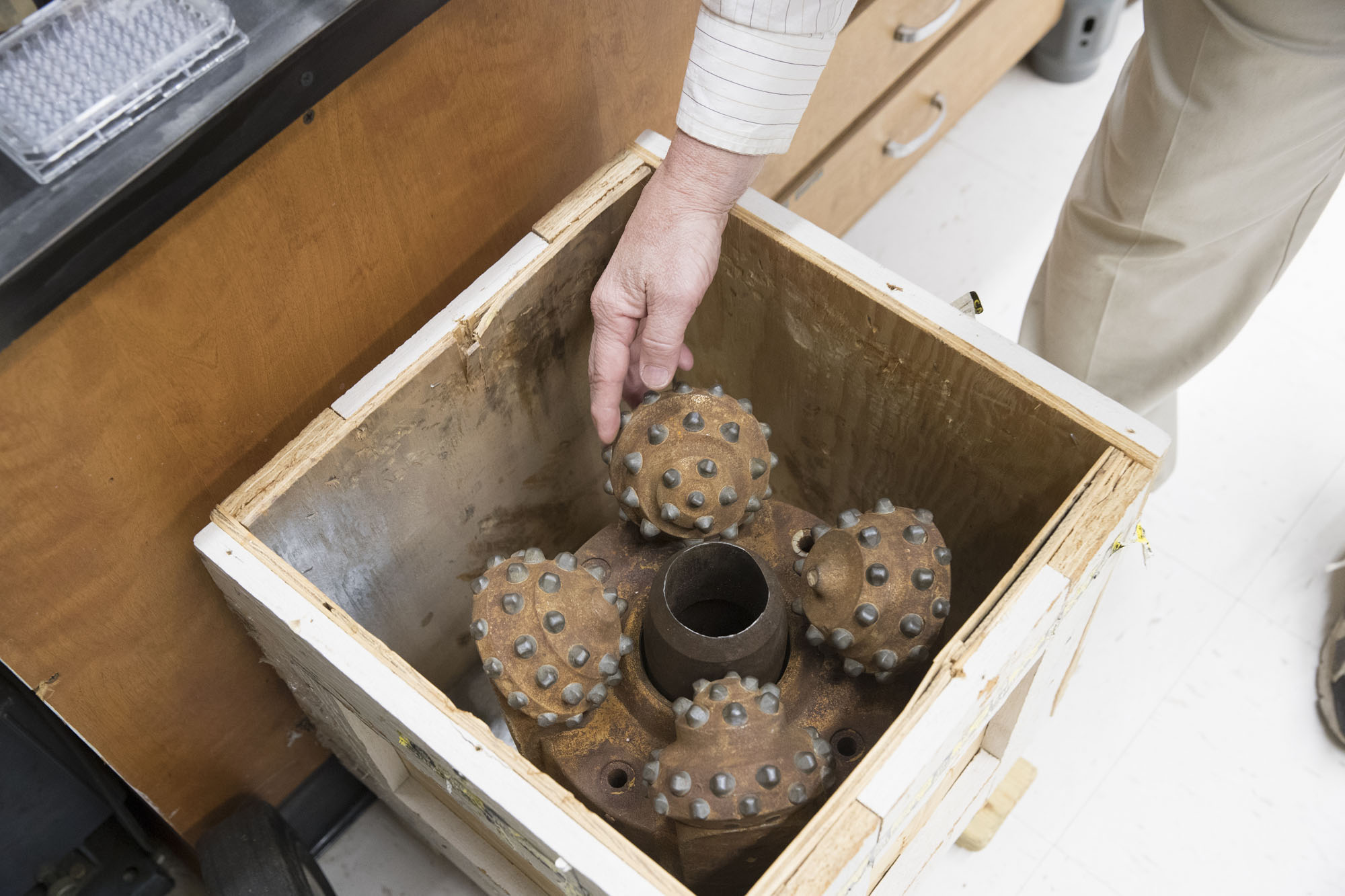 Macko also influences the science-focused sessions of each years’ Virginia Festival of the Book, sometimes personally inviting noted authors to give readings and discussions. He often serves as a moderator at topical sessions, as he will again on March 23 for astrobiologist and author David Grinspoon. He’s excited that Dava Sobel, author of “Longitude” and “Galileo’s Daughter,” and, most recently, “The Glass Universe” will be part of this year’s festival. He uses “Longitude” in his oceanography class.

Macko is a first-generation American. His father came from the former Czechoslovakia and his mother’s family came from Poland. His father became a career military man and retired from the U.S. Air Force. His mother was a homemaker. Macko is one of seven children, and was the first in his family to earn a Ph.D. (in organic geochemistry from the University of Texas at Austin).

“My family’s history demonstrates how great America is, and always has been; a land of opportunity,” he said.

Macko came to UVA in 1989 from Memorial University of Newfoundland, Canada. Oil companies had offered him geochemistry jobs, but he declined to leave the classroom and the basic research he so loves in the academic world.

“If I’d gone into the oil industry, I probably would have ended up in management, and possibly would have retired by now,” he said. “But I’m happy with the way things turned out, the interactions I’ve had with scientists in so many fields at the University and elsewhere. I think that what makes life interesting, like in science, is not what you expect to find, but rather what evolves from where things take you. I love serendipity, the path it takes you down.”

He plans to continue.

“At present I have no interest in retirement,” he said. “I’m still invigorated by my students, by teaching them, and by the research we do. I’ll keep doing this transferal of knowledge until they find me slumped over my desk or mass spectrometer.”

Even then, his life’s work will continue through the students he’s inspired.

“The family is doing well,” he says, referring not only to his immediate family, but also to the new generation of geochemists, environmental scientists and professors who are continuing to branch out from the ever-growing tree of science. It’s Macko’s heritage, and his legacy.

A Year We Will Never Forget: 2019-20 in Review END_OF_DOCUMENT_TOKEN_TO_BE_REPLACED

‘What Will You Carry With You?’ Remarks From UVA President Jim Ryan END_OF_DOCUMENT_TOKEN_TO_BE_REPLACED