What Happens When You Interview Two of UVA’s Most Famous Journalists? 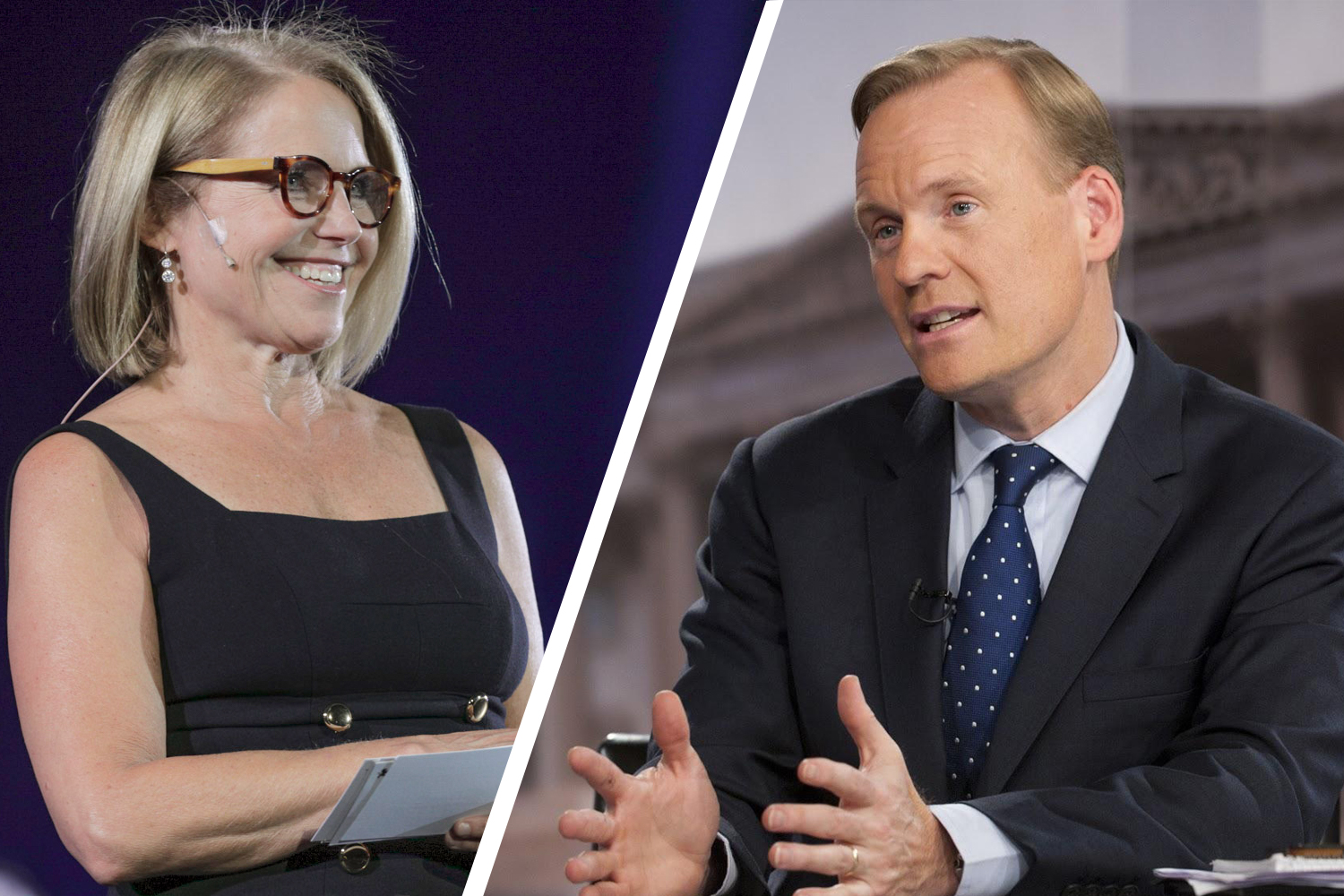 Katie Couric and John Dickerson are normally the ones asking the questions.

Couric and Dickerson, both alumni of the University of Virginia and on hand for Friday’s spectacular Bicentennial Launch Celebration, are some of the most well-known American journalists at work today.

Amid a busy evening of celebrating on the Lawn – including Couric’s on-stage cameo with some of the first women to graduate from the University – the pair took a moment to answer some questions, standing at the edge of a bustling crowd outside of Professor Larry Sabato’s Pavilion IV home.

Couric, who graduated from UVA in 1979 and was a senior resident on the Lawn, rose to national prominence as a co-host of “The Today Show” on NBC and has interviewed some of the most famous and infamous figures of the modern era. Currently, she is working on a six-hour documentary series for National Geographic exploring the people and ideas at the forefront of the pivotal issues shaping – and often dividing – society today. She released another documentary with National Geographic, “Gender Revolution: A Journey with Katie Couric,” earlier this year. 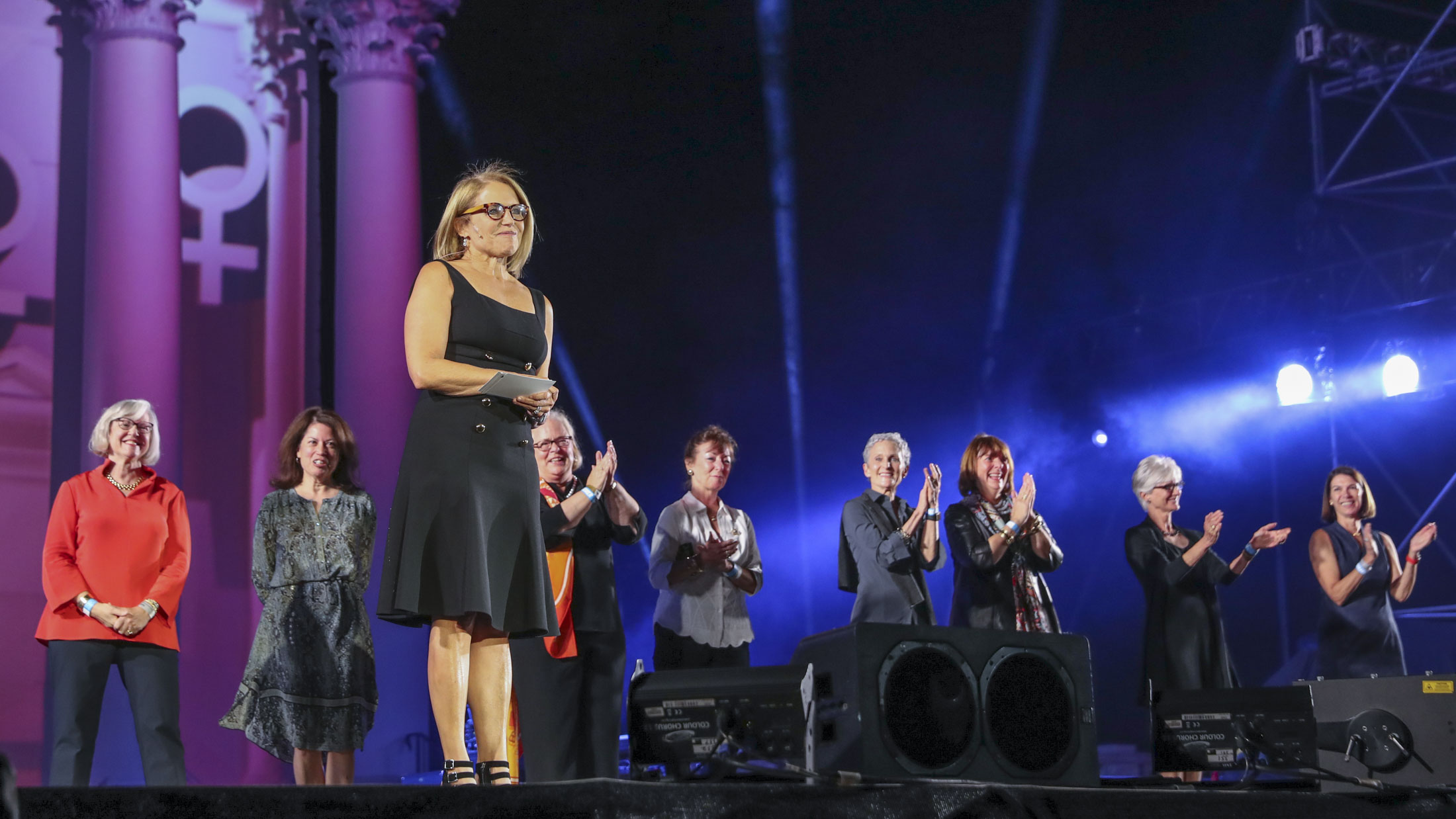 Alumnus John Dickerson is the chief Washington correspondent for CBS News and anchor of “Face the Nation,” one of the longest-running news programs on air today. The Washington, D.C., native moderated both presidential debates hosted by CBS News during the 2016 election, and has covered six presidential campaigns since becoming a political correspondent in 1995.

Here are excerpts from our conversation with them on Friday:

Couric felt it was especially important for alumni to return to UVA this year, both to celebrate the University’s 200th birthday and to support the community after white supremacist demonstrations at UVA and in Charlottesville on Aug. 11 and 12.

“This is a great time, particularly given those events, for the whole community to come together and stand for what UVA is all about, which is friendship, academic excellence, honor, integrity and openness,” said Couric, who covered the August demonstrations as part of her work for National Geographic.

“I would have come back anyways,” she continued, smiling as she looked out over the bustling Lawn, “but I think it is even more important now for us to show the country and the world that this is what the University of Virginia is, and what Charlottesville is.”

“Picking up on what Katie said, both with respect to Charlottesville and to the country right now, we are going back to the founding principles of this country,” he said. “What does it mean to be an American? What do those values and standards mean? Are we living up to them? Who represents us in the fight to keep those standards?”

Fittingly, Bill Barker, the actor playing Thomas Jefferson in Friday’s festivities, walked by that moment, as if Jefferson himself was striding down the Lawn again. Without missing a beat, Dickerson quipped, “You’re looking well after so many years.”

After earning a laugh from Barker, the journalist returned to his point.

“Many of those standards were written here … tonight is a chance for us to come back to that place, that original moment,” he said. Indeed, later in the evening Jefferson’s famous refrain – “We hold these truths to be self-evident that all men were created equal” – would ring out across the Rotunda stage many times, made particularly poignant by the presence of the descendants of the enslaved laborers that built UVA and Jefferson’s home, Monticello.

Couric’s documentary series focuses on what she called “some of the most pressing social issues of our time,” including the reexamination of America’s memorial landscape, the technology revolution and how it is impacting our behavior, Islamophobia, gender inequality and the debate around political correctness and free speech.

“It’s exhausting, but it’s really rewarding to roll up your sleeves and look at these issues in-depth,” Couric said of her rigorous filming schedule, which has had her flying around the country every week.

“One might say Thomas Jefferson, but I think, for me, it would be Edgar Allan Poe.”

- John Dickerson on who he'd interview from UVA's past.

“That is something that isn’t done often enough on television, except on ‘Face the Nation,’” she said, grinning at Dickerson.

Both Couric and Dickerson noted how efforts at UVA reflect national conversations around memorializing the enslaved and contextualizing many of the country’s most historic spaces. They mentioned recent changes to the UVA landscape, such as the planned addition of a Memorial to Enslaved Laborers near the Lawn and the renaming of buildings like Gibbons House, a dormitory now honoring William and Isabella Gibbons, who were both enslaved by University professors. After emancipation, Isabella became a beloved teacher, and William a well-known minister in Charlottesville and Washington.

“I think there are real efforts to reconcile the past, something I have been very focused on in the past several months,” Couric said.

“How strong are your flashbacks, when you come back here?” Dickerson asked Couric with a laugh.

Couric said that she had returned to Grounds fairly often since graduating, especially when her sister, Emily Couric, served as a Virginia state senator. Still, she said that driving her camera crew near her old dorm, Bonnycastle, earlier in the day had been a bit surreal.

“I went down Hancock Drive [near the Hancock and Bonnycastle dorms] with our crew today, and it felt a bit crazy to be back there,” she said. “Really, we are so lucky to be here. It’s a beautiful night, and I just feel very lucky to be here on the Lawn, having this kind of celebration.”

On their dream UVA interview

Which figure from UVA’s past would two of its best-known journalists want to interview?

“One might say Thomas Jefferson, but I think, for me, it would be Edgar Allan Poe,” Dickerson said after giving the matter some thought. Poe was briefly enrolled at UVA in 1826 before financial troubles and gambling woes force his withdrawal.

“I would do a joint interview with Thomas Jefferson and Sally Hemings,” Couric said, the gleam in her eyes revealing that tough, unflinching style that many of her past interviewees can attest to.

Couric said that being willing to ask those tough questions –in imaginary conversations but more importantly in real ones – is very important right now at UVA and around the country.

“I think this is a very healthy exercise, as painful as it can be, to get a deeper and fuller understanding of our history,” Couric said. “The conversations that are going on right now, wherever you stand on the issues, are really important. We are all learning more about our history and that is a good thing.”

What it Means to Be a Cavalier Baseball Player END_OF_DOCUMENT_TOKEN_TO_BE_REPLACED