What’s the True Story of Brooks Hall? This Architectural Historian Has the Answer 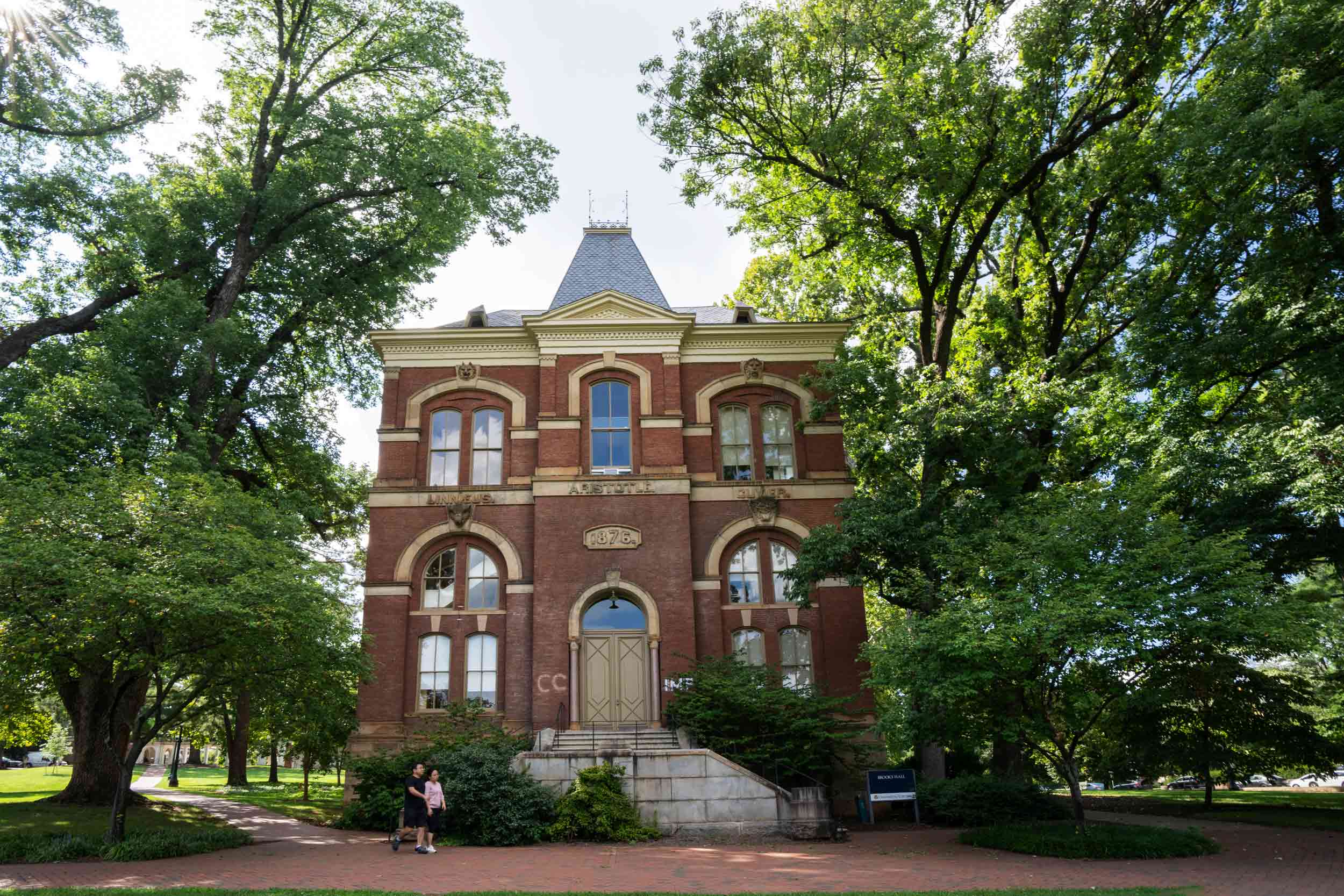 Brooks Hall, built in 1876, was designed in a French Second Empire style, with mansard roofs, which some thought clashed with the Jeffersonian architecture of the Academical Village. (Photo by Dan Addison, University Communications)

Richard Guy Wilson will retrace some of his own footsteps in University of Virginia history.

Wilson, professor emeritus of architectural history, will speak Sept. 29 at the Colonnade Club, recounting an address he gave to students at Brooks Hall in 1976, marking that building’s 100th anniversary. At the time, there was talk of demolishing Brooks Hall, but it remains a UVA landmark today and is within the boundaries of the UVA/Monticello UNESCO World Heritage Site designation.

Wilson’s pending talk, before an invited audience, will be livestreamed and recorded. It has been organized by Greg Saathoff, a professor of emergency medicine and chair of the Colonnade Club’s “Our Uncommon Grounds” series of signature programs. 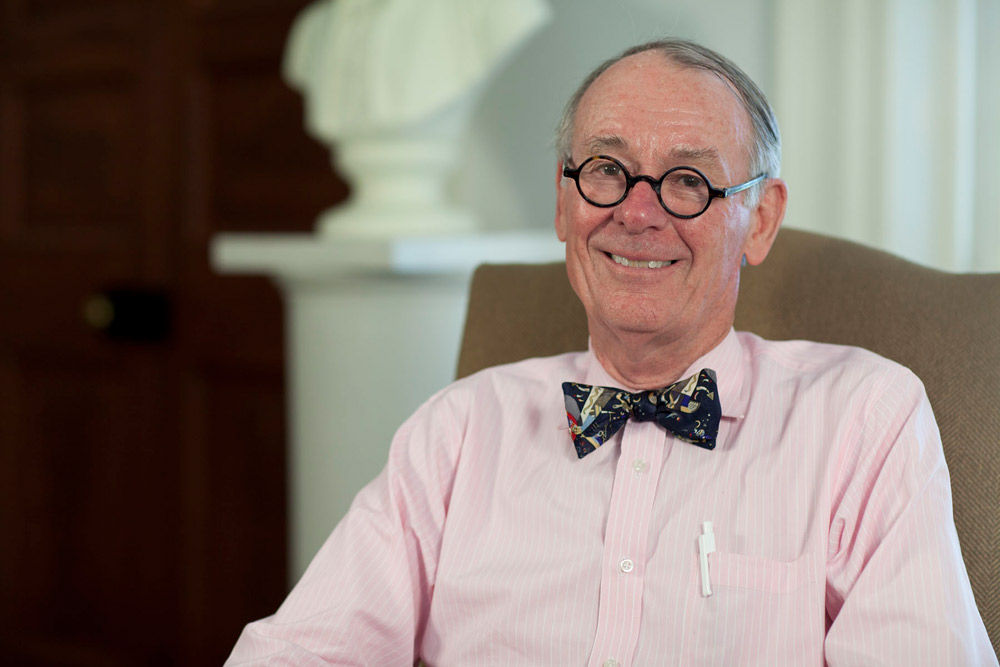 Richard Guy Wilson, professor emeritus of architectural history, gave an address in 1976 noting the 100 years of Brooks Hall. Some credit his talk with saving the building. (Photo by Dan Addison, University Communications)

“Richard’s upcoming presentation will be a unique opportunity to hear from the same professor giving a major presentation about the same building, although separated by approximately 45 years,” Saathoff said. “Jefferson certainly designed the Academical Village and pavilions so that students could experience architecture’s historic value, and in making his presentation in the 1970s, Richard caused students and faculty and administration to have a greater appreciation for their environment and its history and importance.”

Brooks Hall was a gift to the University, the first building donated by an individual, Lewis Brooks of Rochester, New York. It was designed by John R. Thomas of Rochester – who also designed the Rochester Theological Seminary and Sibley Hall at the University of Rochester – as a natural history museum, to feature a collection created by professor Henry Ward, who collected artifacts from around the world and sold the collections as a business.

“The style of the building is what might be called French Second Empire, with the mansard roofs,” Wilson said. “At the same time, it has a certain amount of polychrome, the contrast between the red brick and all of the trim. When it was put up, it was very much up-to-date and this was the hot new stuff that was going on in this country.” 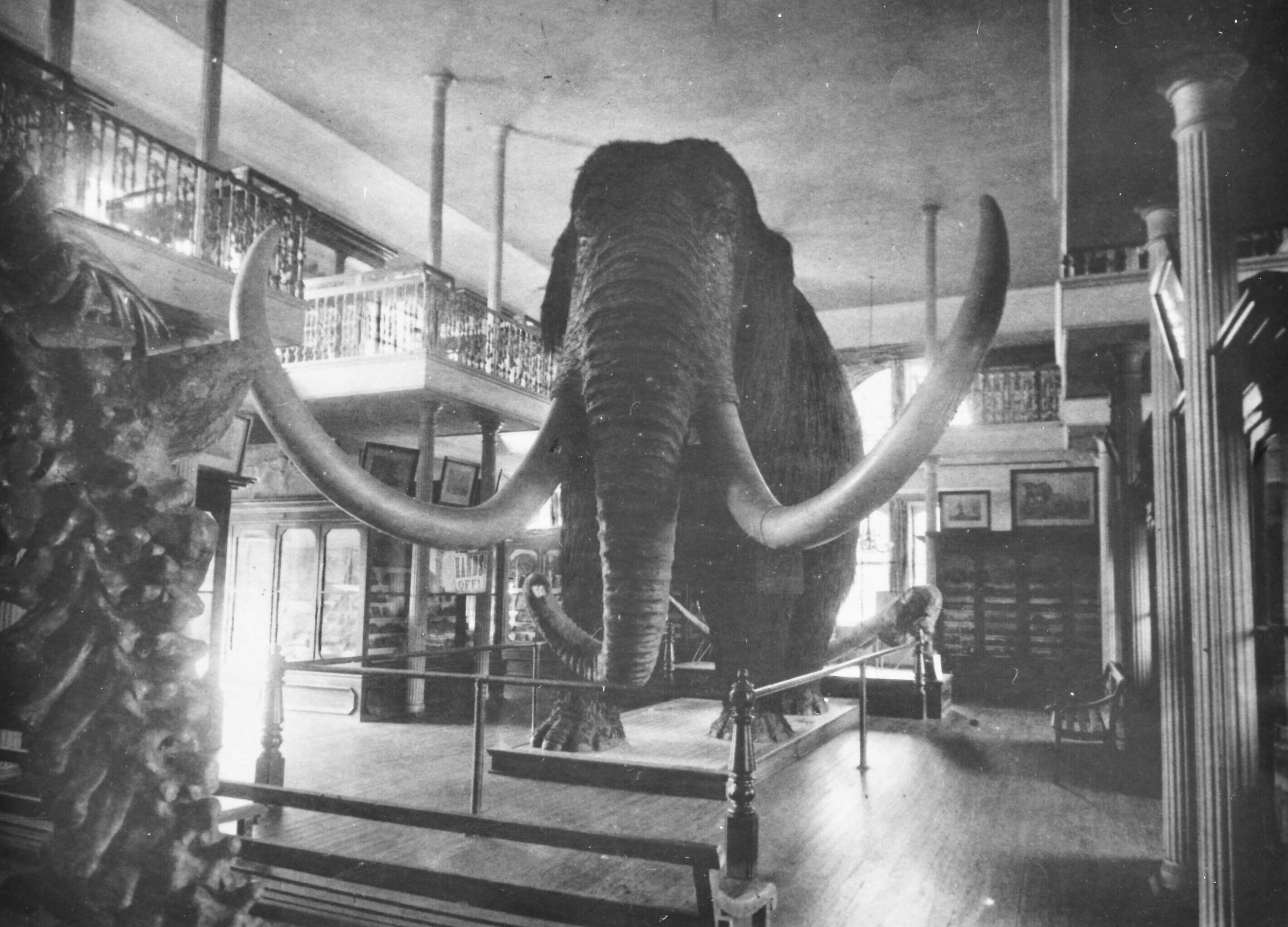 A life-sized, accurate reconstruction of a woolly mammoth was one of the draws to the Brooks Museum of Natural History, the first building donated to the University. (University of Virginia Special Collections)

Wilson came to UVA from Iowa State University in September of 1976 to teach modern and American architecture. At the time, there was concern that Brooks Hall clashed with the Jeffersonian designs of the Academical Village, and it was under consideration for demolition.

With that backdrop, Wilson addressed the UVA Chapter of the Society of Architectural Historians and the Virginia Chapter of the Victorian Society in America on the topic of “American Architecture in 1870: Why Look at It?” at Brooks Hall on Nov. 10, 1976.

Wilson planned to use a slide projector set up in the entrance hall, “but since the students were all sitting on the stairs and nobody could see it, I had photocopies done of different things and I handed them around and gave the talk,” Wilson said.

For Wilson, Brooks Hall was a product of its times.

“This is about 10 years after the Civil War, and it was apparently an attempt to try and bring some things back together,” Wilson said. 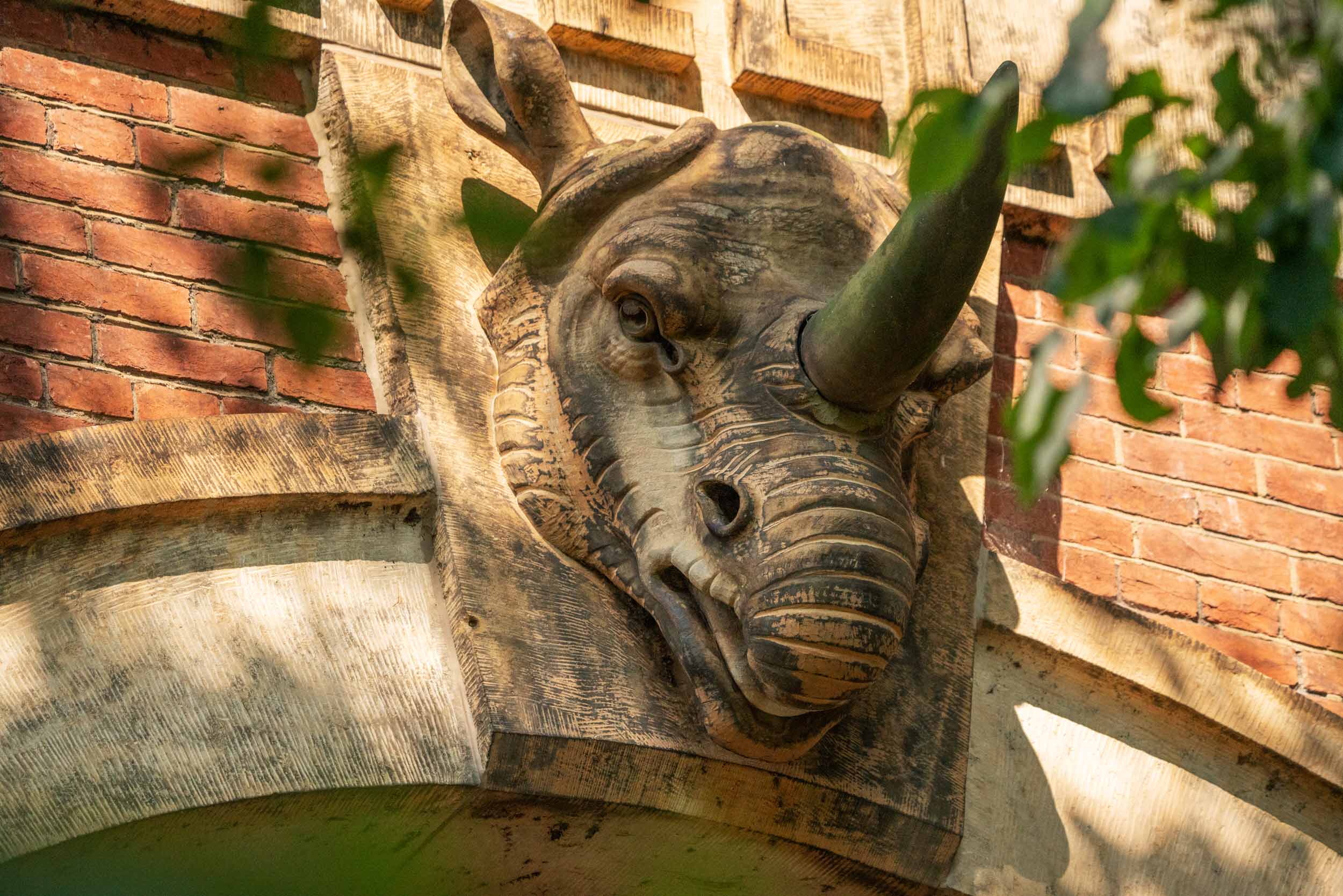 The Brooks Hall frieze contains the heads of the various animals and the names of natural historians. (Photo by Dan Addison, University Communications)

The foundation was started on July 1, 1876, and completed a year later. But Lewis Brooks died the year the building was finished and never got to see it.

The building is 75 feet tall, built originally with a 25-foot-high, double-story alcove. The museum contained about 25,000 specimens, including a life-sized reconstruction of a mammoth and a “dinosaur skeleton” made of plaster of Paris. Both were later removed. 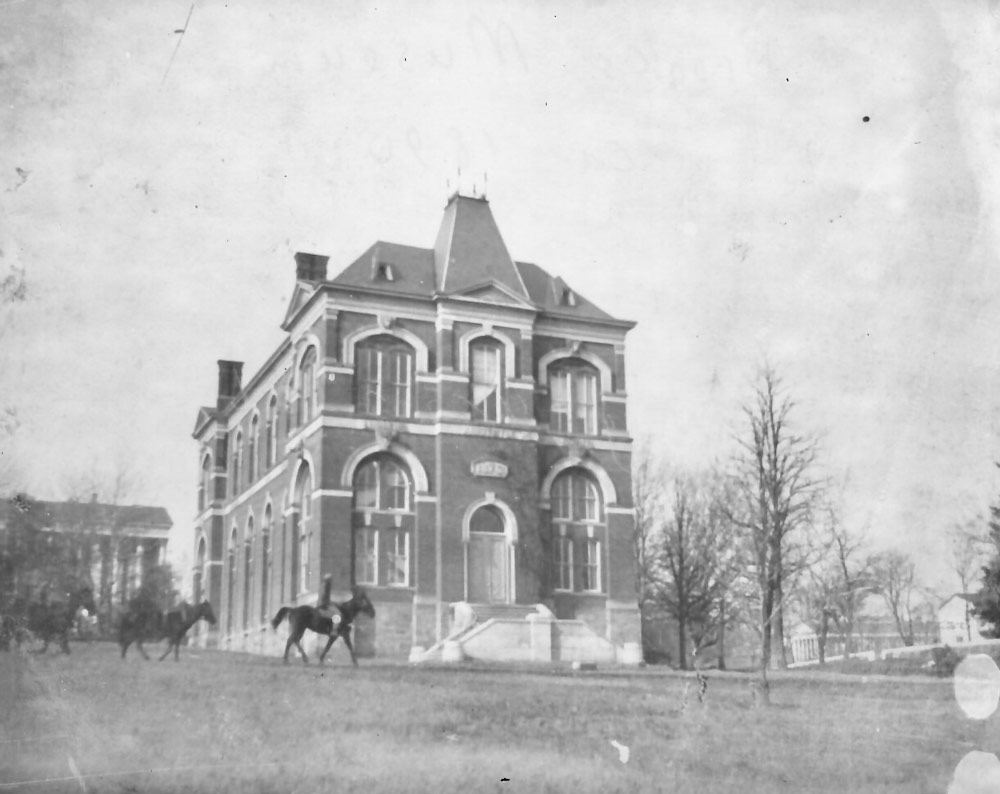 Brooks Hall, which now houses the Department of Anthropology, was once the Brooks Museum of Natural History. (University of Virginia Special Collections)

Anthropology professor emeritus Jeffrey Hantman, who had an office in Brooks Hall for 34 years, said disparaging remarks about the building began to circulate in the 1890s. Critics claimed it was too ornate.

Brooks Hall ceased functioning as a museum by the 1940s, and antagonism toward the building peaked in the 1970s. While the Board of Visitors passed a resolution in June 1973 changing the name from Brooks Museum to Brooks Hall, it does not appear that there was ever a BOV resolution to tear down the building.

“I am not aware of a formal move to demolish the building, but discussion of its removal was very much in the air in the late 1970s and early 1980s,” said Brian Hogg, senior historic preservation planner in the Office of the Architect for the University. “It was perceived as not Jeffersonian enough, as not belonging at UVA, as unattractive.”

Some people in the University community tried different tactics to save the building. Mark Reinberger, then an undergraduate student of architectural history, filed an application with the National Register of Historic Places to list Brooks Hall. The building is currently included in the University of Virginia Historical District.

“We were told by someone – I don’t remember who – that Brooks was slated for demolition, and it seemed a reasonable thought because the University was letting Brooks deteriorate as if they didn’t want to keep it,” said Reinberger, now professor emeritus in the College of Environment and Design at the University of Georgia. “We thought perhaps getting it on the National Register would help prevent demolition. At least that is how I remember things happening.”

So when Wilson again speaks on Brooks Hall later this month, it will be from a place of appreciation and education, rather than desperation to save the building. 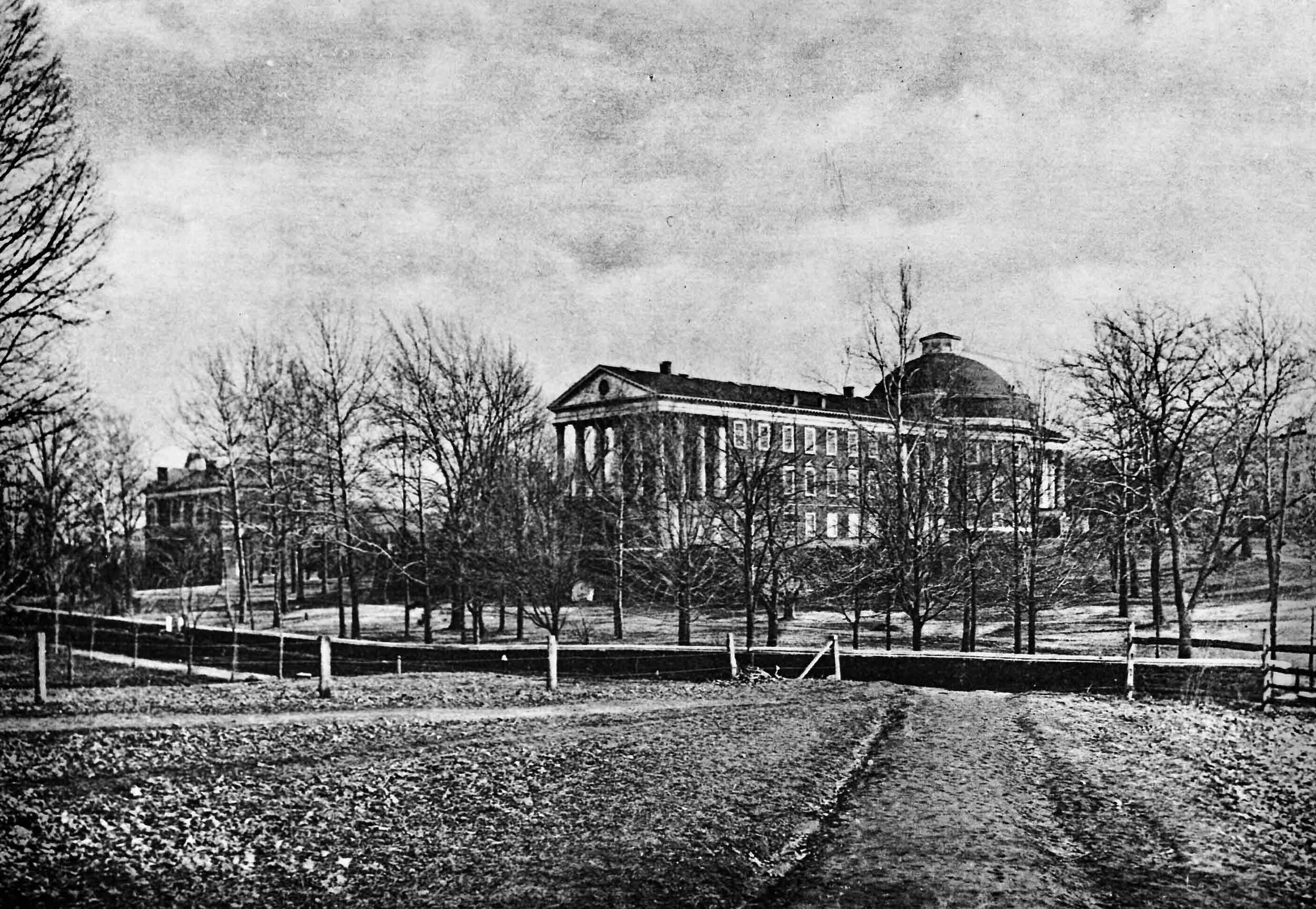 Brooks Hall, at the left, forms part of an architectural arc with the Rotunda Annex, which burned down in 1895, and later the University Chapel. (University of Virginia Special Collections) 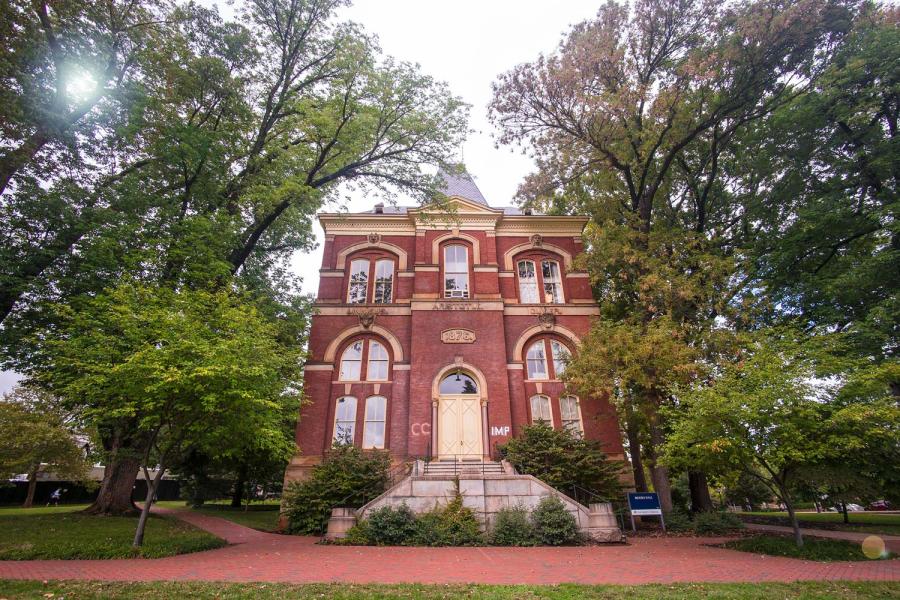 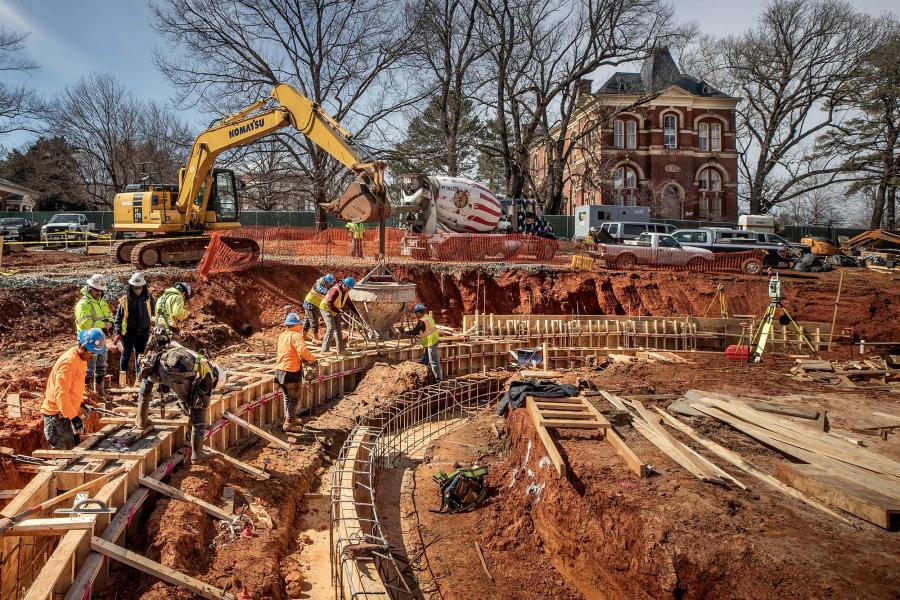 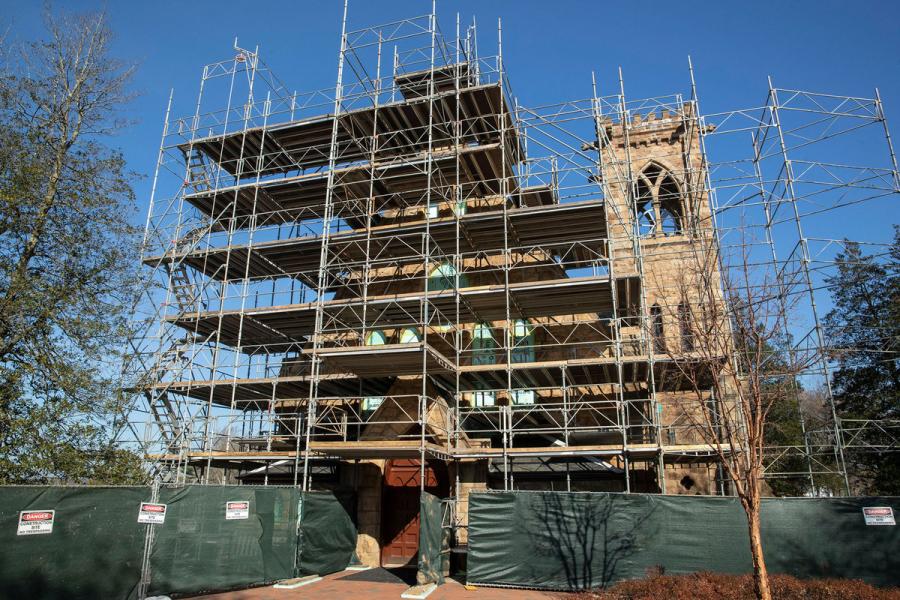