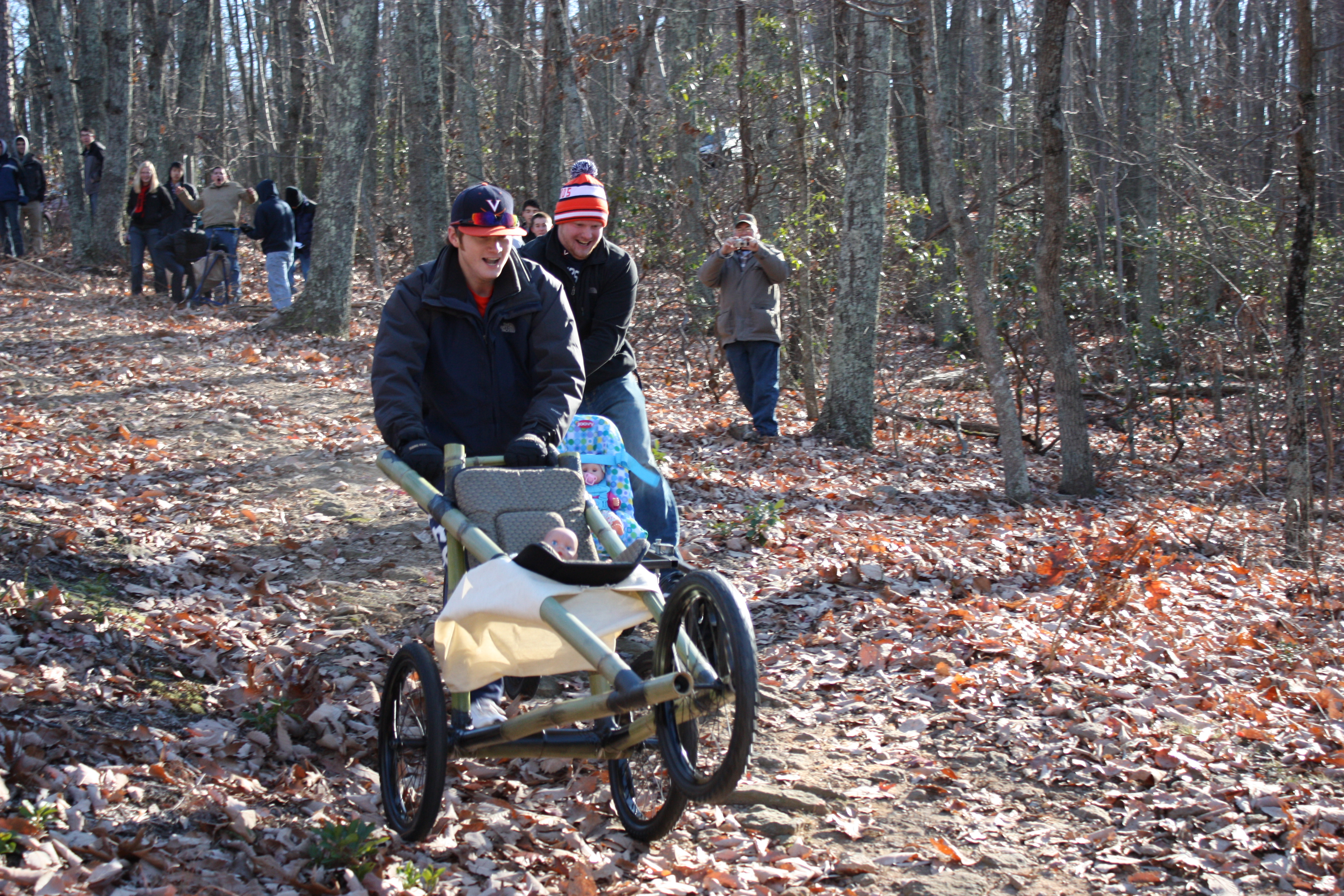 December 9, 2010 — Books and lectures are just the starting points for learning how to design and build a new technology. Truly learning engineering design methods requires getting your hands on power tools, and sometimes welding torches.

As part of their first-year "Introduction to Engineering" course, students from the University of Virginia School of Engineering and Applied Science learned the design process by building, and racing, off-road baby strollers.

"We were driven by the philosophy that you can't learn design if you've never built something, and most students haven't," said William Guilford, an assistant professor of biomedical engineering and creator of the class. "These students are learning design while applying classroom lessons. They learn from mistakes along the way and the experience teaches them how to design, build and make their projects work. "

The course, which is taught in three sections by Guilford and fellow biomedical engineering faculty members Richard Price and John Hossack, offers students an engaging setting for learning how to solve problems, design and build as engineers.

Last year, Guilford secured a Jefferson Trust grant for $30,000 to teach students engineering design related to perinatal care. After discussing course ideas with his colleagues, they decided that having students design and build off-road baby strollers would be a fun and competitive way to teach the subject.

Earlier this month, in a series of rooms in Stacey Hall near Grounds, you could hear the whir of power drills and pounding of mallets as students put the finishing touches on their all-terrain baby buggies. The five-member teams were free to use any material, but many chose to work with sections of narrow steel beams and recycled bicycle parts. What started out as brainstormed ideas and sketches earlier in the semester were taking shape as strollers designed to carry infants along the Appalachian Trail.

The students were getting their projects ready for a final grade and competition in the second annual Stroller Derby. The derby, a combination of trial runs and head-to-head races, was held Wednesday on trails at U.Va.'s Observatory Hill that are similar to terrain on the Appalachian Trail. For safety purposes, plastic dolls were used to test the integrity of their designs. An iPhone with an accelerometer application was clipped to the chest of the doll to measure the vibration and shock experienced by the mock passenger.

Once testing was complete, strollers competed in head-to-head races down a rocky, sloping trail. The strollers and their drivers kicked up leaves and dust as they made their way to the finish line. The racers drew loud cheers from their classmates as they crossed the finish line or overturned their strollers, and sometimes themselves, trying to get there.

Students will be graded on the creativity of their designs, quality of the finished project and their analysis of the stroller's performance. Failing or succeeding in the derby doesn't count toward the final grade, but the instructors do place emphasis on a team's ability to accurately explain why their stroller performed as it did.

A common lesson among the 100 students in the course has been learning from design mistakes that only became apparent during construction.

"The hands-on experience teaches you things that you can't learn in the classroom," said Peter Kim, a first-year engineering student. "You run into problems and you have to solve them. These were usually detail-oriented mistakes that we didn't think of during early brainstorming sessions."

Kim and his teammates built a steel-framed stroller with two front wheels for added stability. The design is similar to a wheelbarrow, having no rear wheels, and uses a bungee-cord suspension system to reduce vibrations for the infant passenger.

Another group used bamboo for their stroller's frame. The students were inspired to use the material after constructing an early model of their design with chopsticks. Bamboo's light weight, strength and organic nature, helped to reinforce their initial choice of material.

Team member Ryan Slater was given permission to collect the bamboo from his neighbor's yard while he was at home in Virginia Beach. He then dried the sections of bamboo in his dorm room for several weeks. To make the frame, the sections of bamboo were fastened together with epoxy and carbon fiber patches. A week before the derby, team members applied the final coats of lacquer to the frame and secured the seat with strips of leather. The team won the "Instructor's Choice" award for their innovative use of bamboo and carbon fiber.

Over the past two years, the instructors have seen many students get excited about the engineering design process through the stroller project and competition. Price recalls a student who completed last year's course commenting how she now finds herself analyzing the built world around her. She told Price how she looked at the ceiling sections of a bus and considered whether they were screwed, riveted or welded together; something she never would have done before the class.

"It's supposed to be fun and students have an epiphany when their design actually works and does what it's supposed to," Price said.

A Year We Will Never Forget: 2019-20 in Review END_OF_DOCUMENT_TOKEN_TO_BE_REPLACED

‘What Will You Carry With You?’ Remarks From UVA President Jim Ryan END_OF_DOCUMENT_TOKEN_TO_BE_REPLACED