A World Heritage Site, U.Va. Stays Historic, Modern and in Use Daily 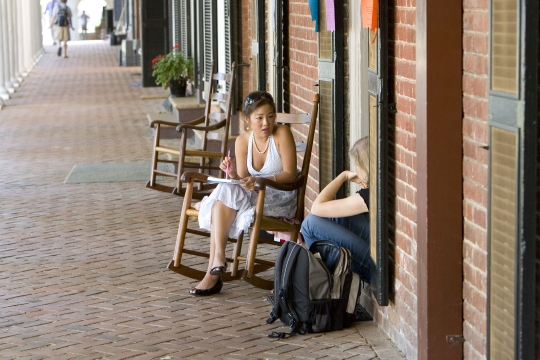 The Academical Village, the geographic and spiritual core of the University of Virginia, is not only a World Heritage Site, but it has maintained its functional integrity and is still serving its original purpose.

The Academical Village – the Rotunda, Lawn and Range rooms, hotels, gardens and pavilions – make up University founder Thomas Jefferson’s original plan for the school. Students and their teachers would live together, attend classes on the ground floor of the professors’ homes and interact daily. Nearly 200 years after Jefferson first articulated it, his ideal is still operating.

“The designation is based on Thomas Jefferson’s comprehensive architectural vision,” current University Architect David Neuman said. “It’s not just the buildings, but the site plan and the architecture and the landscape architecture.”

Neuman noted that U.Va, is the only U.S. university and one of only four worldwide designated as World Heritage Sites, along with University and Historic Precinct of Alcalá de Henares in Spain, Ciudad Universitaria de Caracas in Venezuela and the Central University City Campus of the Universidad Nacional Autónoma de México in Mexico City.

“This is the paradigm of the American campus,” Neuman said. “This is not a historical relic we are struggling with. It still functions well, we have classes and events and we serve meals and house students. It has always continued to be adaptable.”

Because it is still in use, the Academical Village has undergone a fair amount of work during the past several years. This fall, the flues were replaced in all the student rooms on the Lawn and the Ranges after cracks were discovered in the chimneys. While the Lawn and Range rooms are connected to the University’s central heating system, the resident students have traditionally been able to enjoy fires in their fireplaces, which are original to the rooms.

While repairing the chimneys, crews also worked on the roofs and installed a fire suppression system.

Several pavilions have undergone renovation, with Pavilions IX and X being the most recent. The exterior of Pavilion X was restored to its original appearance, including replacing a parapet that had been removed in the 1890s and changing the column and trim color from white to the original sandstone color. It’s interior is being renovated to bring it up to 21st-century living standards.

The Lawn itself was completely resodded this past summer, the first time in its history, and the Rotunda is undergoing an extensive renovation to replace the roof and bring the building mechanicals up to date. Fundraising for that project, with an estimated cost of $50 million, is ongoing.

Though the University does turn to outside contractors when needed, the bulk of the skilled work in the Academical Village is performed by University employees. The University maintains a crew of artisans and craftsmen specifically for the central Grounds, said Jay Kingel, the director of operations and maintenance at Facilities Management.

“We have gardeners who have been specifically trained in the plants and techniques needed for the Jeffersonian gardens and Jeffersonian traditions,” he said. “We have masons who have made an extensive study of working with old structures.

“This is a special place cared for by special people and we are all fortunate to be part of it.”

The extent of the work around the Academical Village in the past 25 years has required a lot of preliminary archeological work, since each project could disturb something of historical significance. Alumnus Ben Ford, a principal in Rivanna Archaeological Services, has been conducting studies at the University since 1999.

“Archaeological investigations at the University of Virginia have consistently demonstrated that despite continued construction and upgrade of existing facilities, the preservation of archaeological resources within the Academical Village is remarkably intact,” Ford said.

Among specific archaeological studies, Ford cited a few as being most memorable: the 2005 mapping of the original 1820s pavilion garden walls, the excavation of the Poe Alley cistern in 2005 and 2006, and the examination of the Catherine “Kitty” Foster site off Jefferson Park Avenue that is now incorporated into the South Lawn project.

Brian Hogg, senior preservation planner in the Office of the University Architect, noted that the World Heritage Site list marks 21 sites in the United States, of which only four are man-made.

“This is an international recognition of the importance of Jefferson’s vision,” Hogg said. “It is a statement that his home and this institution are of architectural importance. It also raises awareness and draws visitors.

“We are working hard to be good stewards of this place,” he said.

Jefferson’s architectural works were formally nominated for World Heritage Site designation in December 1987 by the U.S. Department of State, the Department of the Interior and the National Park Service, the International Council on Monuments and Sites and the Virginia Division of Historic Landmarks. In 1976, the members of the American Institute of Architects voted the Academical Village an outstanding achievement in American architecture.

“The Academical Village, which comprises the earliest components of U.Va.’s Central Grounds and represents the synthesis of classical antiquity and advanced community planning, remains unique as a unified artistic creation and as a planned academic setting in the world,” said the late J. Murray Howard, U.Va’s architect for historic buildings and Grounds at the time the nomination was made.

It’s Copperhead Season in Virginia. Here Is What You Need to Know END_OF_DOCUMENT_TOKEN_TO_BE_REPLACED

What’s Next for UVA’s Class of 2022? END_OF_DOCUMENT_TOKEN_TO_BE_REPLACED