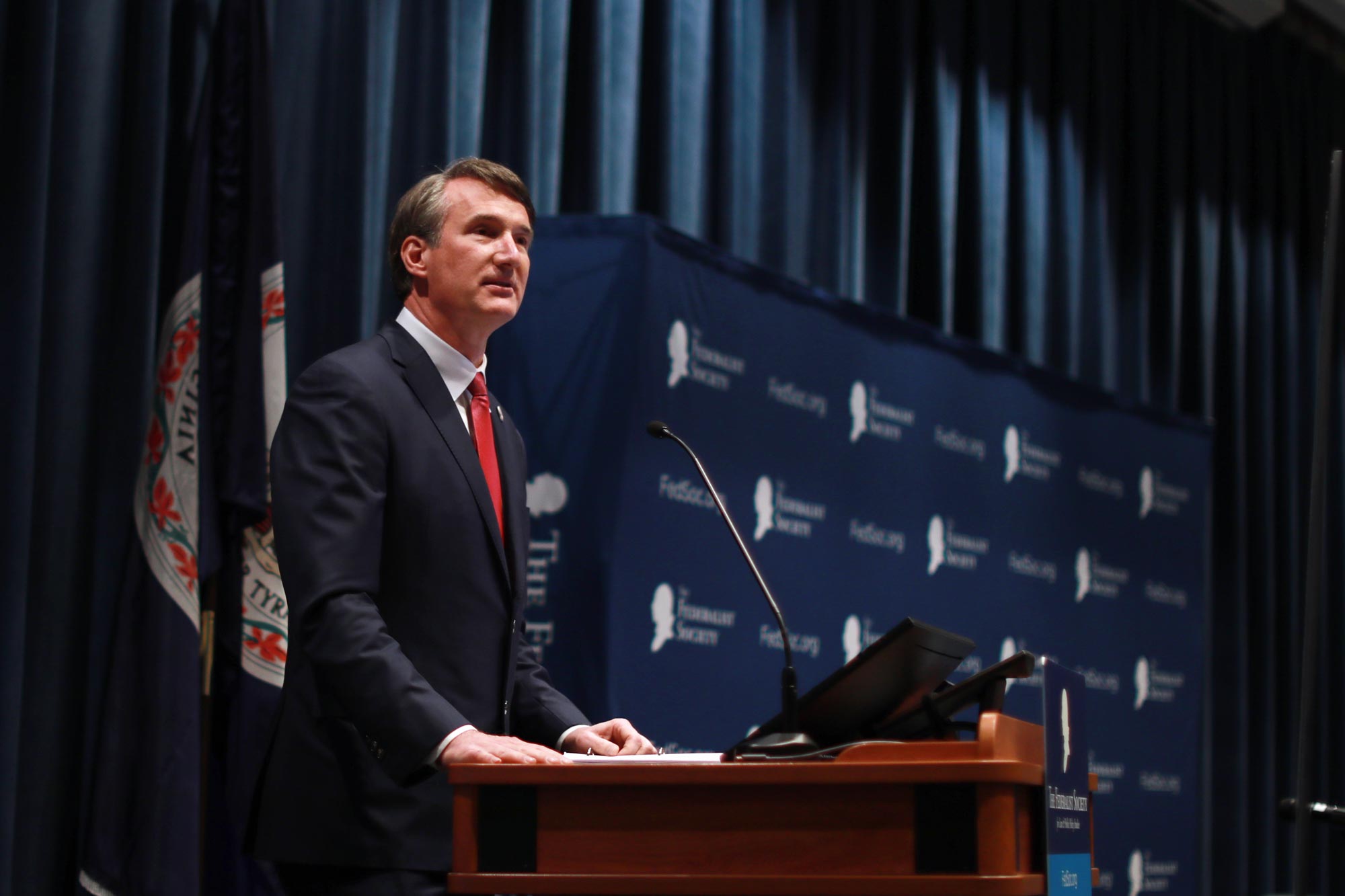 Gov. Glenn Youngkin urged ambitious students who wished to contribute to the betterment of their communities to focus at the local and state levels to make the greatest impact. (Photo by Julia Davis, School of Law)

Virginia Gov. Glenn Youngkin encouraged students and others who wish to make a difference in their communities to get involved at the state government level, saying more gets accomplished there than in the federal government.

Youngkin spoke Friday at the 41st Annual National Student Symposium, sponsored by the University of Virginia School of Law chapter of the Federalist Society. The symposium was themed “The Federalists vs. The Anti-Federalists: Revisiting the Founding Debates,” and focused on the arguments surrounding the ratification of the U.S. Constitution to help shed light on the document’s original meaning.

Youngkin, the 74th governor of Virginia who is now serving in the first year of his four-year term, was the keynote speaker.

Noting he was speaking to the Federalist Society – an organization of lawyers, law students and scholars who support the principles of limited government they point to as embodied in the U.S. Constitution – Youngkin focused his comments on federalism, individual rights and the rule of law.

He said he understood how people would be alarmed and discouraged looking at the extremism and dysfunction in Washington.

Youngkin said James Madison, known as the father of the Constitution, “gave us checks and balances, but today in our nation’s capital it often seems like leaders have checked out and the balances in the idea bank have dropped to zero.”

“Most of the time up there is spent in gotcha games,” he said. “It takes forever to get anything done and that oftentimes means it never gets done.”

But the Republican governor also said the framers of the Constitution foresaw this, creating a federal government with limited powers, imparting the true power to the states and with the people. The states, he said, are charting the future.

“Federalism after all is not only a structure that prevents excess and overreach by those who would take away our freedom, federalism is also a structure that empowers people to exercise their freedom,” Youngkin said. “To act together to improve their communities, to make their states a better place to live, work and raise a family, to live a good life and help make life better for others.”

He cited French author Alexis de Tocqueville, who visited the United States in the 1830s and wrote “Democracy in America.”

“De Tocqueville made a lot of salient observations as he toured early America, but none were more important than his insight that the health of this and every democracy depends on preserving decision-making at the level closest to the people,” Youngkin said. “He said when government is centralized and distant, people don’t think the well-being of their communities is their responsibility.”

Youngkin compared the government in Richmond versus Washington. He said during his four years in office, the Virginia legislature will likely consider around 14,000 pieces of legislation, of which 3,500 to 4,000 might reach his desk. He compared that to 89 bills the U.S. Congress advanced to the president’s desk last year.

“Each of the bills that comes to me as governor will address a single subject, as our state constitution requires,” Youngkin said. “They aren’t like those massive omnibus bills in Congress that run hundreds of pages and cover thousands of topics with no ability to make individual policy judgments or to approve or reject individual spending items. At the state level, the policy details are not left to legislative staffers, but delegates and senators debate them mightily with passion in committees and on the House and Senate floor.”

And he told the symposium audience that these were not minor pieces of legislation. Truth-in-sentencing laws, welfare reform and education standards came from the states and became models, influencing national public policy.

“If you want to serve and make a difference immediately, pick a state capital and join the front lines of self-government at the state level. Get engaged in the hard work of democracy where democracy is working hard rather than hardly working. Because we could use your help.”

Youngkin also cited the fundamental principles built into the Bill of Rights.

“It has been said that the one truly original idea of the founding fathers was the freedom of religion,” Youngkin said. “No country before ours had vision or courage to declare that faith is a matter of individual conscience, a God-given right that occupies a space that no government, democratic or otherwise, may invade. Virginia led the way here. And if religious views could not be stifled, then neither could any other kind of individual expression. And so the First Amendment comes to stand for the first principle. Free expression is a hallmark of a free society.”

But he also questioned how well that free expression was faring in governments, companies and on campuses across the country.

“Our great colleges and universities draw diverse people from all around the country and all around the globe,” the governor said. “But when they arrive, do students find these communities to be open, welcoming of diverse ideas? Are they encouraged, equipped and empowered to think for themselves and express their views without fear? Or are they more often subjected to a stifling conformity? Dreary ideological sameness?”

“I cherish the debate,” he said. “I have found over and over again that it is the merit of the arguments that allow us to win, not the volume of the voice.” 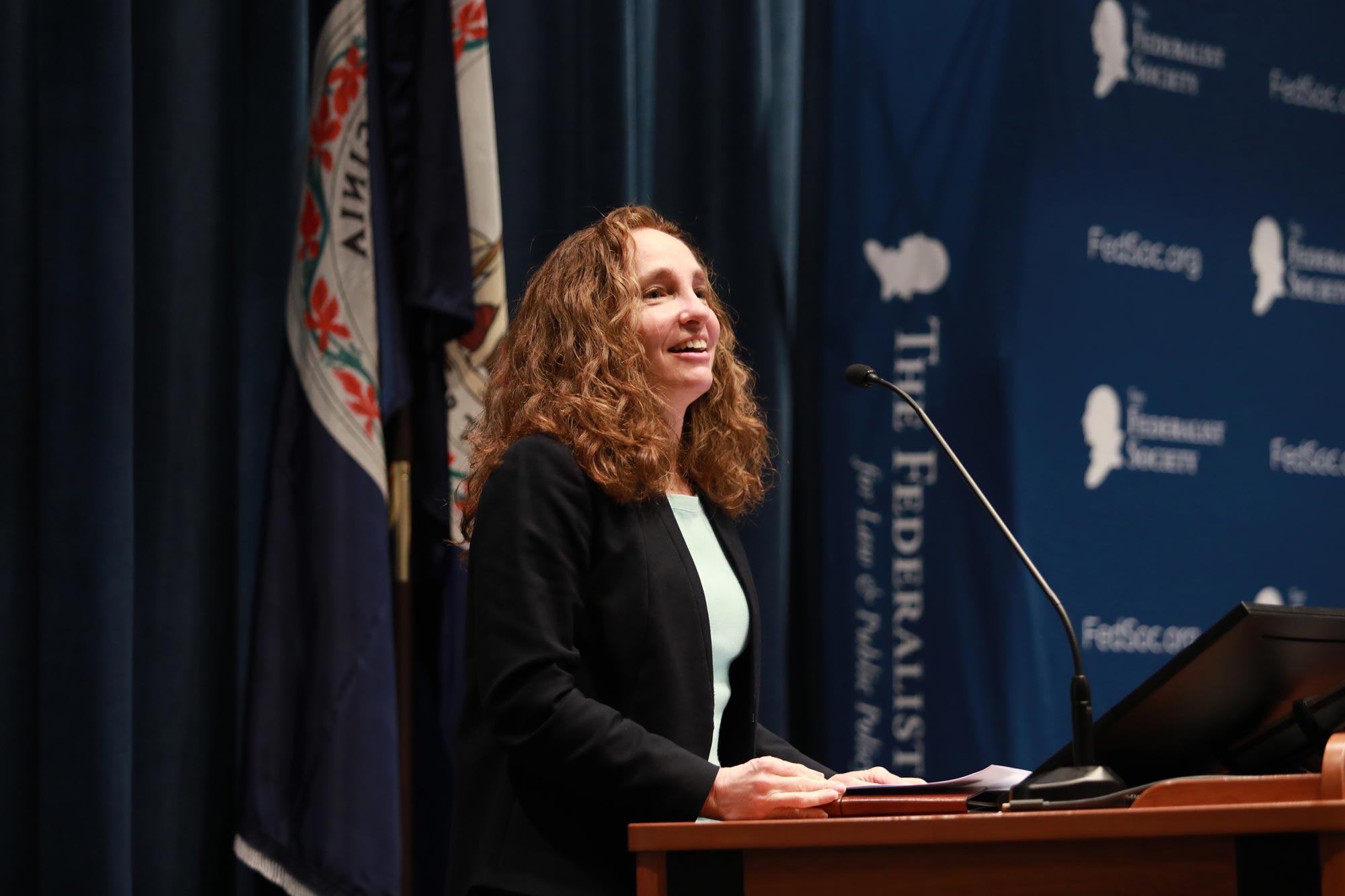 Law School Dean Risa Goluboff introduced Youngkin as a person who demonstrates one can make a difference – as a basketball player, engineer, CEO and governor, all roles Youngkin has had. (Photo by Julia Davis, School of Law)

Youngkin said the greatest threat to democracy today is not foreign but domestic.

“The greatest threat to our democracy comes from a growing tendency to loathe rather than listen,” he said. “It comes from a desire to bully and not persuade. Such a culture of contempt, this cancel culture, is toxic to our democracy and unless the schools that exist to teach our young people take responsibility for being a solution, our democracy will indeed be in danger.”

Youngkin also emphasized the fundamental importance of the rule of law – and the risks that come when it is not respected.

“This principle of equal justice under the law and fidelity to the rule of law are especially important in these troubling times we live in, with so many of our institutions and ideals under assault, with so many politicians willing to justify any means to achieve a partisan goal or bend any fact to fit a partisan narrative,” he said. “We desperately need young people, dare I say young lawyers, with the clarity and integrity to stand up for the rule of law.”

Youngkin said the constitutional principles being debated at the symposium were vital for the survival of the republic.

“We have an unparalleled opportunity, an obligation to put these principles to work and pass them along. I hope I have cracked open a door that some of you would consider service at the state level.”

Youngkin was introduced at the symposium by Law School Dean Risa Goluboff, who also serves as the Arnold H. Leon Professor of Law. Goluboff said the governor had left the business world because he was called to public service. She said that she hoped such a call would resonate with the students in the audience, adding that with their law degrees, they hold a public trust that they can discharge in many ways.

“Gov. Youngkin provides an excellent model for this task,” she said. “It is possible to have immense success in the private sector as he did and then to enter government when he was called to do so, apply the skills you learn in another setting, to be a basketball player and an engineer, and a CEO and a governor.”

Youngkin was a mechanical engineering major at Rice University, which he attended on a basketball scholarship, and an MBA graduate from the Harvard Business School. He spent 25 years with the Carlyle Group, helping build it into one of the leading investment firms in the world, before deciding to pursue public office.

Founded in 1983, the UVA chapter of the Federalist Society remains one of the oldest and most active chapters in the nation with nearly 100 current dues-paying members and many more who attend its events, such as its series of lectures, debates and panels.