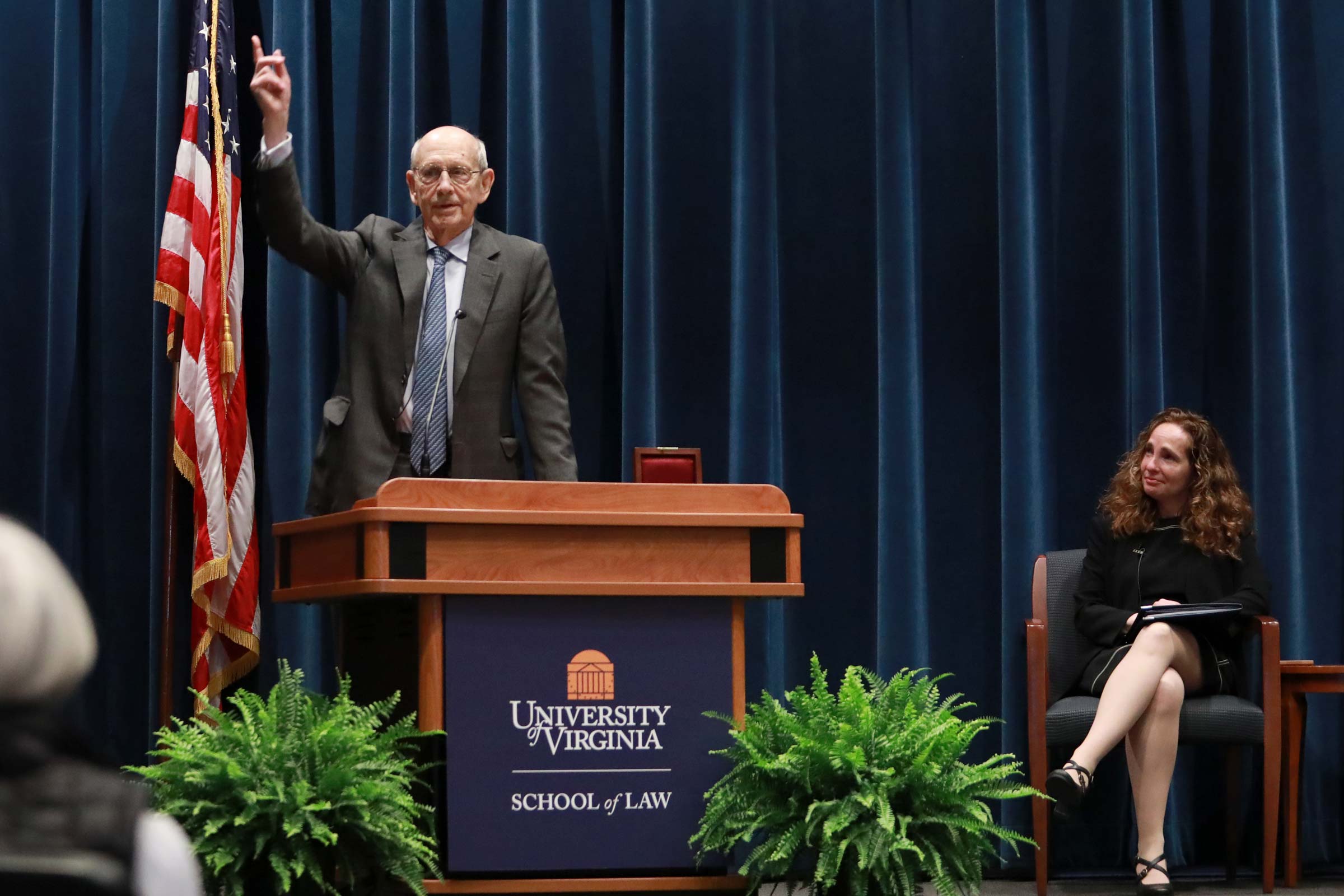 Retiring Supreme Court Justice Stephen Breyer makes a point Tuesday as he speaks at the School of Law’s Caplin Auditorium after receiving the Thomas Jefferson Foundation Medal in Law. (Photos by Julia Davis, School of Law)

Americans are still taking part in the democratic experiment Thomas Jefferson launched with the Declaration of Independence, said U.S. Supreme Court Justice Stephen Breyer in remarks Tuesday at the University of Virginia School of Law.

Breyer spoke to a full audience in the school’s Caplin Auditorium while accepting this year’s Thomas Jefferson Foundation Medal in Law.

He soon answered his own question. 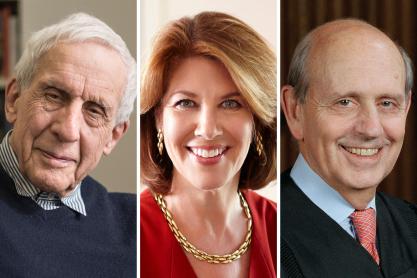 UVA President Jim Ryan, a 1992 graduate of the Law School, presented the medal to Breyer, who announced Jan. 27 that he will retire from the court this summer after 28 years on the bench.

“Many of the ideals that Jefferson espoused remain central to the American experiment and remain at the heart of UVA, including the idea of citizen leadership and public service,” Ryan said. “Today, we honor Justice Breyer, a lifelong leader and a public servant whose devotion to upholding the values set forth in our Constitution has touched the lives of every American.”

Following the medal presentation, Law School Dean Risa Goluboff, who clerked for Breyer before joining the faculty, quizzed her former boss in a wide-ranging interview, with members of the audience also asking questions.

Throughout, Breyer made his case that people can make a difference in American democracy one improvement at a time, and by listening to each other and by finding common ground.

He pointed to Brown v. Board of Education, the 1954 Supreme Court case that deemed segregated schools unconstitutional. It was clear by the time the case came to the court that equal protection under the law was not being followed, Breyer said, and that segregated schools were “separate but not equal.”

Several historical events were driving toward a conclusion on segregation – from African Americans serving in World War II to the nascent civil rights movement after Brown, so the impact of the decision itself was unclear. Breyer said he once asked Vernon Jordan, a close adviser to President Bill Clinton and a lawyer who was “a hero of that movement,” whether Brown mattered.

“And he said, ‘Of course the Supreme Court mattered. Just don’t think they did it by themselves,’” Breyer said. 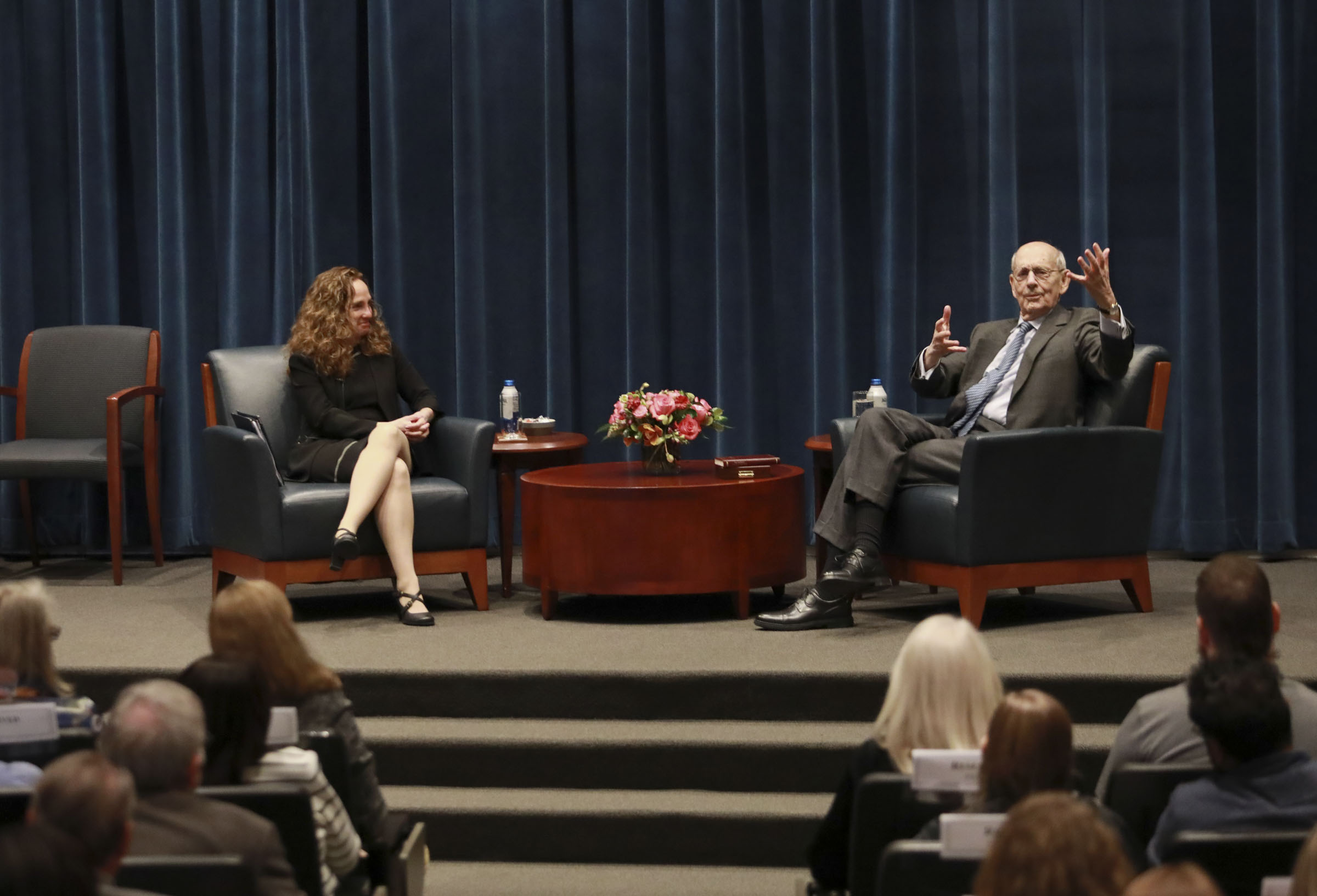 Goluboff, who once clerked for Breyer, led a wide-ranging discussion about the courts role in the “American experiment.”

Breyer noted that the decision, while obvious in retrospect, still took courage.

Breyer said he thought that though people disagree on how to get there, the end goal in a country of 330 million citizens is to have “each of those people respect the other person as a person.”

Asked what has changed at the Supreme Court over his 28 years there, Breyer noted that the court changes very slowly.

“There is a political aspect because of changes in who is appointed,” he said. “I think the question to think about, for those interested, is not so much politics. If they’re interested in law, think about: Is the court changing? And how much? And where? And should it?

“And the answers to that are going to be sometimes more technical than you might think.”

“Why? Because when you’re first appointed to that court, it takes three to five years before you can settle down. I mean, first thing you don’t say to anybody, but [you think], ‘My God, can I do this job?’ And whatever you say and however confident you may appear, you’re thinking, ‘I hope so.’”

Breyer’s seat will go to another of his former clerks, Ketanji Brown Jackson of the U.S. Court of Appeals for the District of Columbia Circuit, who was confirmed by the Senate last week.

“I feel very good about that,” Breyer said.

Recalling his time working with Sen. Edward Kennedy, a 1959 graduate of the Law School, as chief counsel for the U.S. Senate Judiciary Committee, Breyer said he learned lessons in compromise.

“He said, ‘Take people who really disagree with you, and if you need their vote … get them to talk,’” Breyer recalled. “The more they talk, the better, and pretty soon, you’ll discover that they’ll say something you agree with. And when they say that something you agree with, you say, ‘That’s pretty good. Let’s work with that. I bet we can.’ And lo and behold, some of the time you would achieve something not unthinkable. Maybe 30%, but he said, ‘Take the 30%, rather than take 100% of what you didn’t get and be a hero to the group that you’re working with that supports you.’ … And then when the time comes to give the credit, that’s the person you give the credit to.”

Breyer said it was all too easy to think you’re right and the other side is wrong. But listening is important. 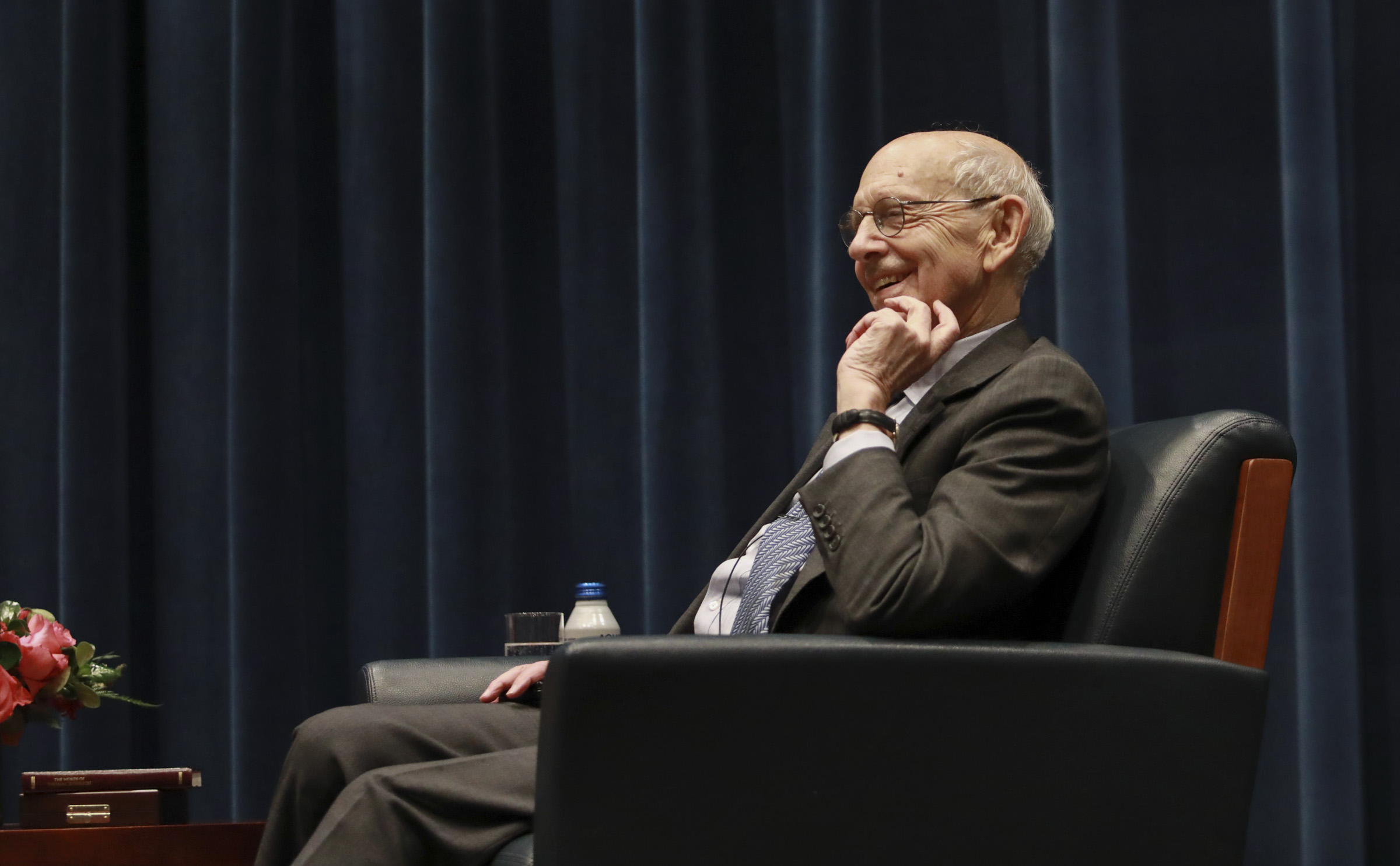 Breyer challenged those in the audience – including high school, college and law students – to continue making the American democracy work.

Breyer pulled out a copy of the Constitution from his coat pocket, noting that some countries are held together by shared memories, and some by a document.

“I believe this is the document. That’s it,” he said.

Breyer has been an associate justice on the court since 1994, after being nominated by President Bill Clinton. Prior to that, Breyer was a judge on the U.S. Court of Appeals for the First Circuit, a professor at Harvard Law School, and served in federal government in various roles.

Breyer’s “belief in deliberation and the importance of relationships have made him the ‘glue’ among his colleagues,” Goluboff said in her introduction. “And his commitment to the court’s unique role in the American constitutional scheme has made him its greatest institutional champion.”

She added, “Justice Breyer will be remembered as a statesman of the highest order, whose gifts and service have redounded to the extraordinary benefit of the Supreme Court and this nation.”

Sponsored jointly by the University of Virginia and the Thomas Jefferson Foundation, the nonprofit organization that owns and operates Monticello, the Thomas Jefferson Foundation Medals are awarded each year to recognize the achievements of those who embrace endeavors in which Jefferson – author of the Declaration of Independence, third U.S. president and founder of the University – excelled and held in high regard. The law medal, and its counterparts in architecture, citizen leadership and global innovation, are UVA’s highest external honors.

The medals are given annually as part of Founder’s Day activities at the University and Monticello, timed to coincide with Jefferson’s birthday on April 13.

“There is a debt of service due from every man to his country, proportioned to the bounties which nature and fortune have measured to him,” Jefferson wrote.

Bowman added, “Justice Breyer, you have paid that debt of service, many times over, so much so that the debt now owed is one of gratitude to you by our country, and we, your fellow citizens.” 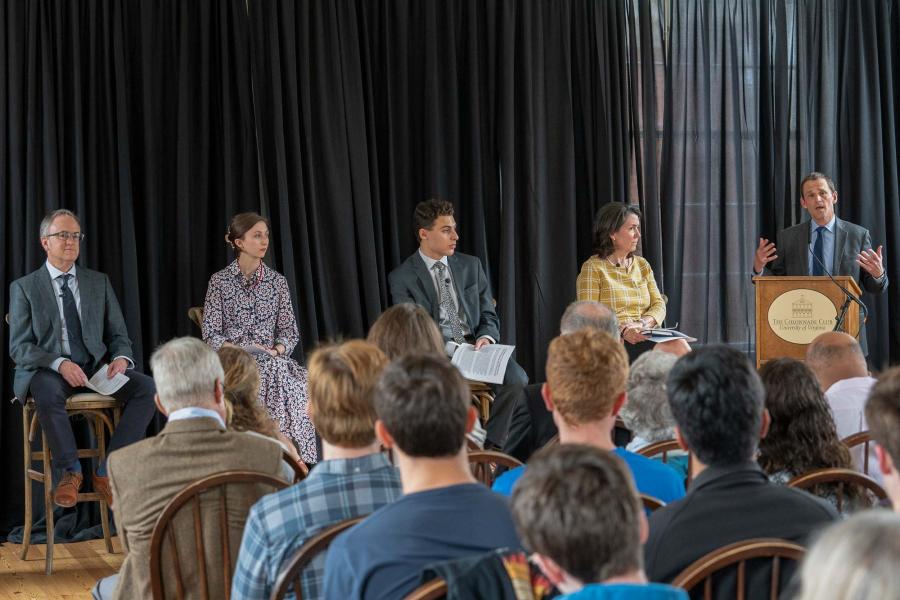 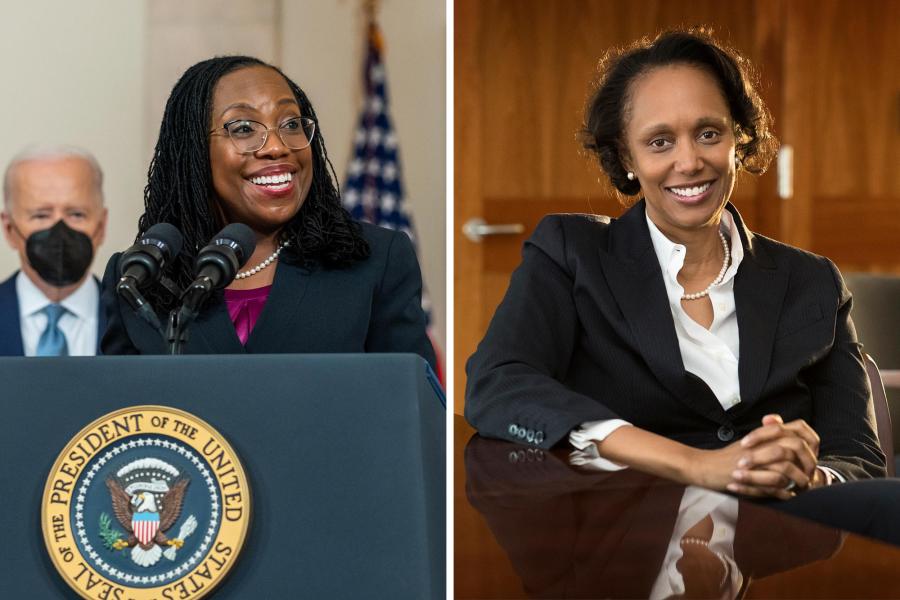 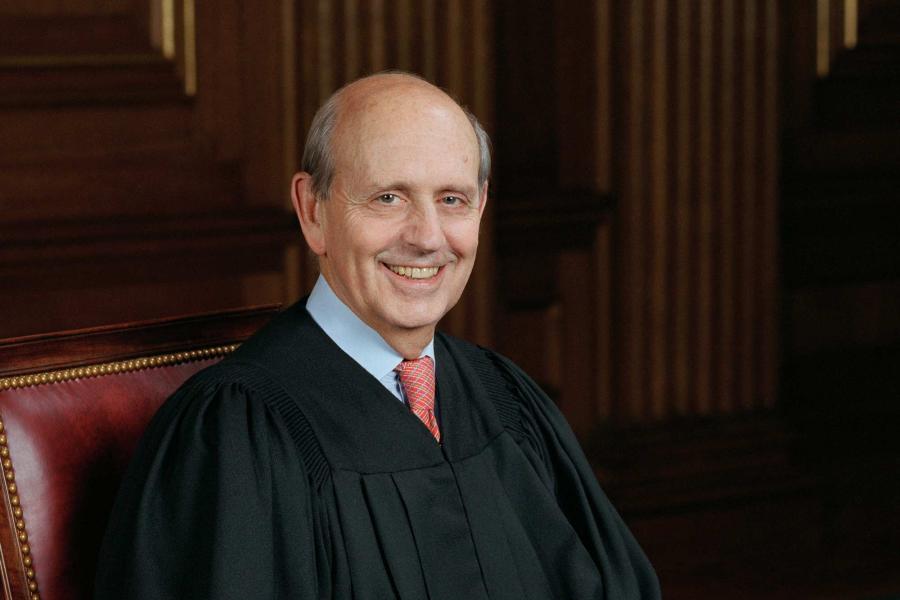