‘The In-Between Times:’ Melody Barnes’ Address to the Class of 2020 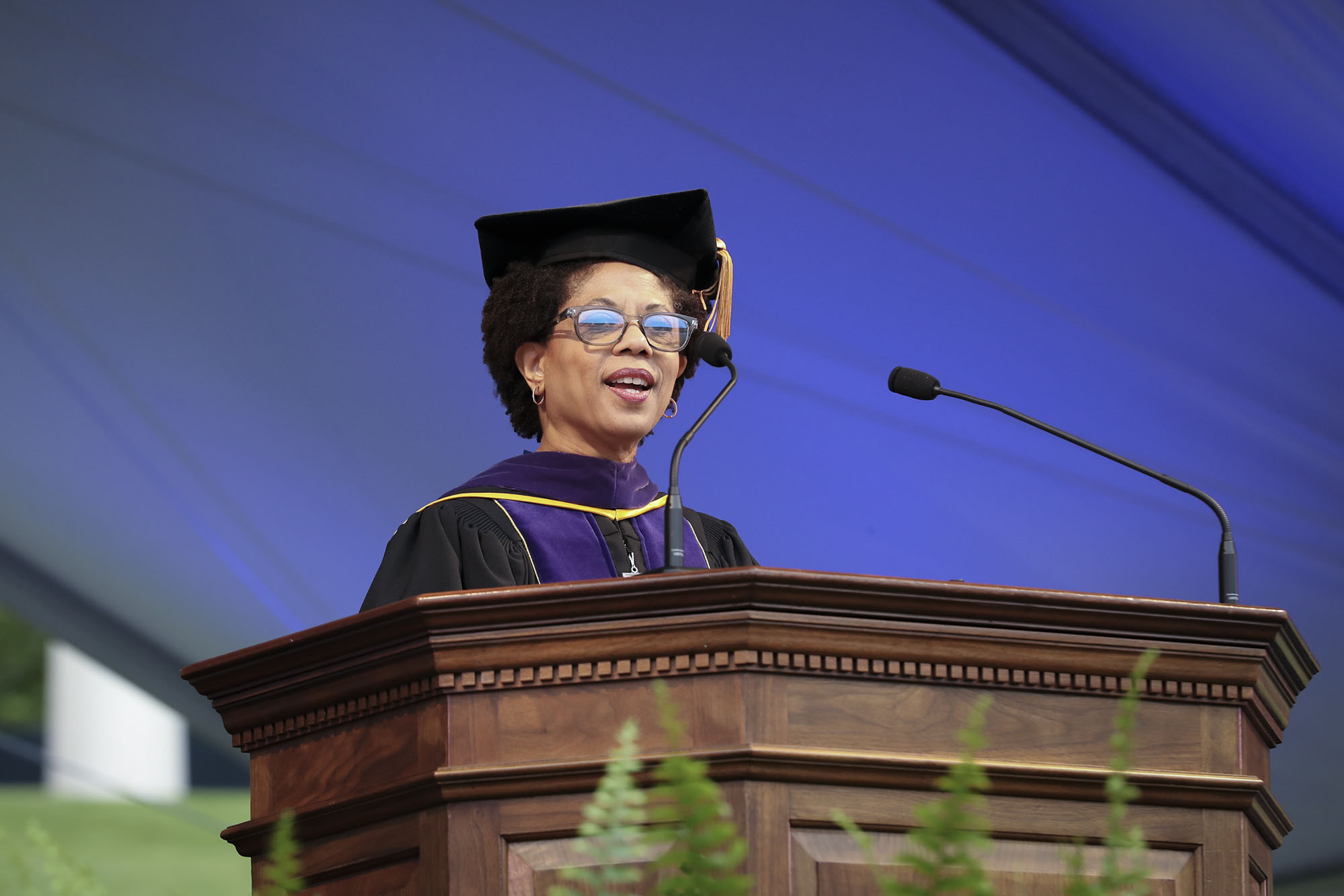 Editor’s note: Melody Barnes addressed the University of Virginia’s Class of 2020 in a Final Exercises ceremony on Sunday, when many members of the class returned to celebrate their accomplishments in person after a virtual celebration during the COVID-19 pandemic in 2020. Barnes, the Dorothy Danforth Compton Professor, is the co-director of UVA’s Democracy Initiative, a professor of practice at UVA’s Miller Center for Public Affairs and a senior fellow at the Karsh Center for Law & Democracy. She has more than 25 years of experience in public policy and directed the White House Domestic Policy Council under President Barack Obama. Her prepared remarks:

t is my honor and pleasure to be here for the live sequel to last year’s digital graduation. I am delighted to congratulate you all and to welcome you back to Grounds for the ceremony you deserve.

I was recently reminded that last year’s graduation speaker was a virtual President Ryan, who is a hard act to follow, even a year later. But for all of your sakes, I’m hoping that I am the rare “season two” that outshines “season one” … or at least “Godfather II” which gave “The Godfather” a run for its money.

When Jim invited me to give today’s address, I thought back to my own graduation and realized I couldn’t even recall whether it was a man or woman who spoke. Not only that, my sorority sisters managed to unearth a photo of that graduation, and let’s just say … it’s a close call whether we were all having a moment of deep reflection – or napping. I’m not proud, but it does serve as a poignant reminder to be brief.

The Class of 2020 – for as much as you have lost over the past year – is one I’ll never forget. Your strength, your patience and your passion make you one of the most special classes to ever graduate from UVA. And I have the privilege of addressing a class that isn’t five minutes past their last final exam. You have been out there in the world, caring for others, volunteering in your home communities, working in your chosen fields. Maybe, for some of you, it was a chance to rethink your goals and priorities. Maybe others of you have been struggling to make ends meet and to keep yourself and your families safe and healthy. Whatever you have been doing, you are already proud UVA alumni, and it’s good to have you back at your intellectual home.

So given this context, I decided that I would scrap the usual graduation exhortations about finding your way in the world. Instead, I would talk to all of you about two ideas that I study and teach: democracy and citizenship. But to do that, I want to start with a story about a wedding.

I have been married to my husband, Marland, for 12 years. I remember our wedding fondly. It was wonderful in every way: It was a rare, humidity-free, cloudless D.C. day. The people we love, and who love us, were there – I can still hear their voices when we sang “Joyful, Joyful, We Adore Thee.” I still remember my dad refusing to let go of my hand when we arrived at the altar, my mom and Marland’s mom laughing with our minister, that final dance to “Let’s Stay Together” with my amazing new husband. It was perfect, and I wouldn’t change a thing.

But as the years have passed, as the photographs have been put away, what I find myself thinking most about are those times in between. The days when I first met Marland, and all that times that followed. Our late-night conversations. Laughing so hard we’re crying and can’t breathe. His unwavering support when my mother became ill and passed. How he has grown to know me better than anyone in the world, and I him.

Friends, I share this with you because you know, better than anyone, that milestone events, like graduations and weddings, are important. But it is the in-between times that make a life.

Now, I’m not saying graduations mean so little that you ought to fall asleep at this point … What I am saying is that for all of the planning, and the pomp and circumstance, and anticipation and expectation, your graduation itself is mostly symbolic. My prediction is that what will stay with you, for the rest of your lives, is what happened in between the day you first arrived on beautiful Grounds – and this moment, right now. Late-night conversations with roommates. Meals at the dining hall with new friends. A class discussion that changed your whole perspective. Coffee and bagels on Saturday mornings. Trips to the library, music practice, cheering for the Hoos. What you did during the long, dark days of the pandemic. The moments you took to seek career advice. The Zoom meetings.

The truth is that presidential elections are important, and voting is one of our most precious rights and responsibilities. But elections are necessary, not sufficient, to sustain democracy.

Democracy – like life – is realized and strengthened in the in-between times. Like what happens between your first day of school and graduation, it turns out that the everyday actions that citizens take can and do pave our country’s path. It is what each of us chooses to do during the in-between times that strengthens our institutions and holds our elected officials accountable, that animates our principles and aspirations, that builds and defines our democratic culture. And it requires each of us, whatever our skills, to contribute.

No matter what you studied at UVA, no matter your career path, or your current job, you have a role to play as a citizen. The pandemic has brought this idea into clear focus. Before the pandemic, did anyone think readily of virologists, immunologists or epidemiologists as critical to our democracy? But their life’s work has informed the public policy response to one of the greatest disasters of our lifetimes, and ultimately will bring the pandemic to an end, averting untold suffering and death. Health care workers, whether they serve in large urban hospitals or rural regional clinics or small practices, are critical to our democracy. Their acts of care, large and small, contribute to the health and resiliency of communities across the country.

At your virtual graduation ceremony, last year, we heard a beautiful and moving performance by my friend, cellist Yo-Yo Ma. What you might not know is that Yo-Yo, who regularly plays on international stages, thinks of himself as a “Citizen Artist” – he’s working in communities, using the arts to help students improve math and reading skills in some of America’s lowest-performing schools – and enlisting other artists to do the same.

Or take Barbara Rose Johns. In the 1950s, she was a 16-year-old African American student who led a walkout to protest the poor conditions at the segregated R.R. Moton High School in Prince Edward County, Virginia. Rather than build a new facility to accommodate the increased student body, the school board had built structures of plywood and tar paper that lacked heating and plumbing. Barbara rallied her classmates for a sustained boycott that gained the attention of civil rights lawyers Spottswood Robinson and Oliver Hill, and the rest was history. A student-led boycott for a better segregated school became the quest for school desegregation, and a lawsuit which became one of five incorporated into the 1954 landmark decision Brown v. Board of Education.

In 2006, residents of Milwaukee, Wisconsin decided to take on a problem many cities face: poverty. But by 2008, they realized a significant driver of that problem was another: teen pregnancy. In fact, among big cities, Milwaukee’s teen pregnancy problem was second only to Philadelphia. So, leaders at the United Way, the city’s health commissioner, public school leaders and teachers, the mayor, business leaders, the University of Wisconsin, the publisher of the Milwaukee Journal Sentinel, members of the faith community and others set a big goal – reduce teen pregnancy by 46% by 2015. Working together, they moved faster than expected, and by 2013, the teen pregnancy rate dropped 56%. They set another big goal, and today, teen birth rates have dropped 65%, and as Nicole Angresano of the United Way said, “This community has fought for these outcomes. Across ZIP codes, across demographics, across constituencies, we have come together to demand better for our young people.”

What’s the lesson for democracy? Class of 2020, those of you who are educators, journalists and economists … democracy needs you. Scientists, mathematicians, data scientists … there’s work to be done. Those of you who are musicians, actors, artists, writers … your skills aren’t just needed, they’re required. Whether your degree was in commerce, the humanities or the sciences, your talent, your perspective, your commitment to democracy will determine our path forward.

We strengthen our nation and our communities when we work, every day, to improve lives and help others succeed. Every citizen can do this. Every citizen must do this. For it is literally our collective actions that determine our success or failure as a country.

Citizenship: A Call to Action

The story of America is complicated – both noble and paradoxical – but ultimately, it is about the expansion of freedom and opportunity. We might hope for faster progress or quicker results, but the slope of the arc depends on us.

So, my greatest wish for you, Class of 2020, is that you ask yourselves: Are you treating citizenship as a noun or a verb? And not just on Election Day, but every day. Coach a team. Help a neighbor. Run for office. Organize a social media campaign. Use your professional path to make this country more free, more just, more equitable, more secure, more vibrant. And, by all means, vote. Your actions – or your decision not to act – come with their own consequences. I urge you not to delegate these tasks and responsibilities to others, but to embrace the fulfillment that can come from taking part in democracy. And remember, that it’s during those in-between times that we can truly fulfill the promise of vibrant self-governance, a thriving democracy and a meaningful life.

Netflix to Add Ads. Why This Could Be a ‘Game-Changer’ for Your Viewing Experience END_OF_DOCUMENT_TOKEN_TO_BE_REPLACED

What’s Next for UVA’s Class of 2022? END_OF_DOCUMENT_TOKEN_TO_BE_REPLACED