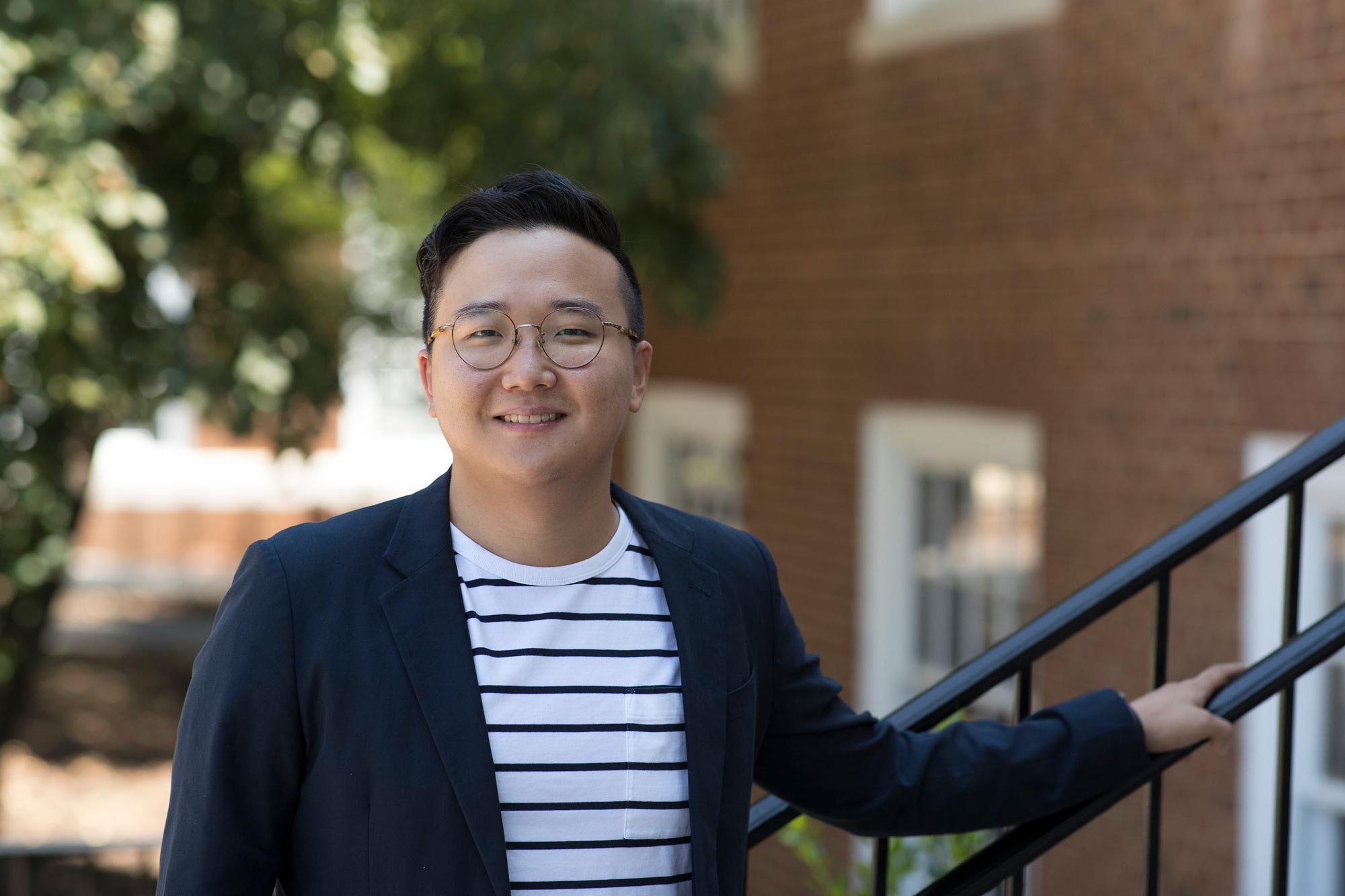 As a child growing up in South Korea, Hyunglok Kim asked big questions about droughts and floods. Now he watches water from space.

“When I was 12 or 13 years old, I was asking questions like why we didn’t have water in some areas of Africa, while we had too much water over some areas of Bangladesh,” Kim said. “I was so excited to see data obtained from space. That helped me understand why we don’t have much water in some areas and why people suffer from water deficiencies there, and it connected. It is related more to a personal feeling I have when I see people struggling with water deficiencies.”

Kim, whose doctoral research at the University of Virginia involves monitoring soil moisture with multiple Earth-orbiting satellites that make microwave readings of the planet’s surface, is still asking questions – questions that are closer to answers due to advancing technology.

“One of the tools on which I rely is UVA’s Rivanna supercomputer,” Kim said. “It has saved me more than 10 years’ worth of research time. Another example is the many improvements in satellites and sensors. Thanks to these new techniques, we can now retrieve very detailed and accurate information from space. All in all, the technical advancements made by our senior scientists have been the major impetus of my research.”

Kim, who received an engineering degree from Hanyang University in Seoul, South Korea, in 2012, decided to learn statistics and machine learning and adapt them to earth science.

He is currently pursuing a Ph.D. in the Department of Engineering Systems and Environment, studying hydrology, data acquisition from space, global-scale water cycles and natural disasters. He also is pursuing a master’s degree in UVA’s School of Data Science.

He recently became one of three Ph.D. candidates worldwide to receive a research grant from the American Geophysical Union’s Robert E. Horton Fund for Hydrologic Research. The grant, for doctoral students in hydrology, water resources or a related field, is a one-year grant up to $10,000, plus up to $500 for travel expenses. His project proposes to integrate observation-based and satellite-based soil moisture data, then apply it to water-related natural disasters, such as droughts and floods.

“His work has practical applications in improving the quantity and quality of satellite- and model-based data to more accurately predict natural disasters and to provide a better understanding of the role played by hydrometeorological factors,” said Kim’s mentor, Venkataraman Lakshmi, a professor in the Department of Engineering Systems and Environment. “For his Horton research, he will use multiple Earth-orbiting satellites to retrieve surface soil moisture information and complete the diurnal [daily] cycle of soil moisture, which will give researchers a better understanding of the link between surface moisture and climate.”

“I examine microwave signals,” Kim said. “Photographs are composed of visible light – red, green, and blue wavelengths – but my research uses microwave bands rather than visible wavelengths. The brightness temperature of Earth’s surfaces is closely related to dielectric constants. This value can be used to determine how much water exists on the surface or vegetation of a particular area or it can even measure ocean salinity. We can retrieve all this data from physically based models such as radiative transfer models [which provide theoretical and practical basis for understanding the propagation of solar radiation in the Earth surface].”

“Measuring soil moisture accurately is key to understanding hydrological processes and forecasting extreme climate events,” Kim said. “The development of new remote-sensing technology has substantially improved the accuracy of land surface models. Confirming the accuracy of satellite-based soil moisture data prior to use is of critical importance, as using low-accuracy data reduces the reliability of climate modeling and forecasting performance. As a result, investigating the factors that cause errors and lower data quality is necessary to improve the quality and accuracy of weather forecasting and can be used to mitigate and prevent disasters such as droughts and floods.”

“In the first few years, the hardest part for me was living and working in a foreign country where people spoke a different language. But recently I have begun to realize that the most important thing – and the hardest – is being kind to people and understanding them. As Dr. Lakshmi told me, ‘If people are not kind to others, there is no reason to live.’ ”

While it is outside the realm of his specific research, Kim said that changes in climate, such as increasing temperatures, can affect soil moisture patterns, which in turn can accelerate or decelerate climate change.

Kim said he is honored to receive a Horton grant.

“Robert Horton is one of the most famous hydrologists in my research fields, considered by many to be the father of modern hydrology,” Kim said. “Since my undergraduate years, I’ve heard a great deal about his research and learned about his theories. I did not even imagine that I would receive a grant in his name.”

Kim received a $135,000 grant from NASA in 2019 for his research under Lakshmi. Long term, Kim plans to apply for postdoctoral fellowships and positions in academia. He has recently published three peer-reviewed research articles in the journals Remote Sensing of Environment, IEEE Transactions on Geoscience and Remote Sensing, and Vadose Zone Journal for his research projects.

“Hyung is a wonderful young man and has a very good attitude in working through research problems,” Lakshmi said. “He has been a great member of our research group. He is always willing to assist younger students with their research questions. His timely responses to queries go above and beyond a graduate student.”

Continuing his research in the United States has created many opportunities for Kim.

“Studying under my adviser, Dr. Venkat Lakshmi, who supports all my needs and allows me to use research resources, has greatly improved my ability to perform necessary research,” Kim said. “I’m also very grateful for the many high-quality classes I have taken at UVA, especially those taught by professors Larry Band, Jonathan Goodall and Julianne Quinn of the Engineering Systems and Environment Department.”

Kim is also pursuing a master’s degree in the School of Data Science.

“All the classes in School of Data Science have really helped me upgrade my knowledge and allowed me to think outside the box,” he said. “The research grants I have been awarded, including the NASA grant and the Horton grant, have also greatly strengthened my ability to perform my life’s work. They have helped me gain a better understanding of the water cycle and will teach me how to help people adapt to the increase in severe hydrological events such as droughts, floods and landslides.”

Kim has been able to continue his research despite the COVID pandemic.

“The COVID-19 situation changed my research plans, since I could not spend grant money on traveling,” Kim said, noting that he has been working with the School of Data Science on his NASA grant. “As this research project is closely related to big data, I have had many opportunities to implement my data science knowledge in this project, to boost my research.”

And maybe the most important lesson Kim has learned in his time in the U.S. is kindness.

“In the first few years, the hardest part for me was living and working in a foreign country where people spoke a different language,” Kim said. “But recently I have begun to realize that the most important thing – and the hardest – is being kind to people and understanding them. As Dr. Lakshmi told me, ‘If people are not kind to others, there is no reason to live.’”

How a Single Email Changed a Life END_OF_DOCUMENT_TOKEN_TO_BE_REPLACED

Fall Is in the Air on Grounds END_OF_DOCUMENT_TOKEN_TO_BE_REPLACED

At UVA, There Is a Club for Everyone END_OF_DOCUMENT_TOKEN_TO_BE_REPLACED