‘Blow the Safe and Get It’: Listen to Nixon’s Response to the Pentagon Papers 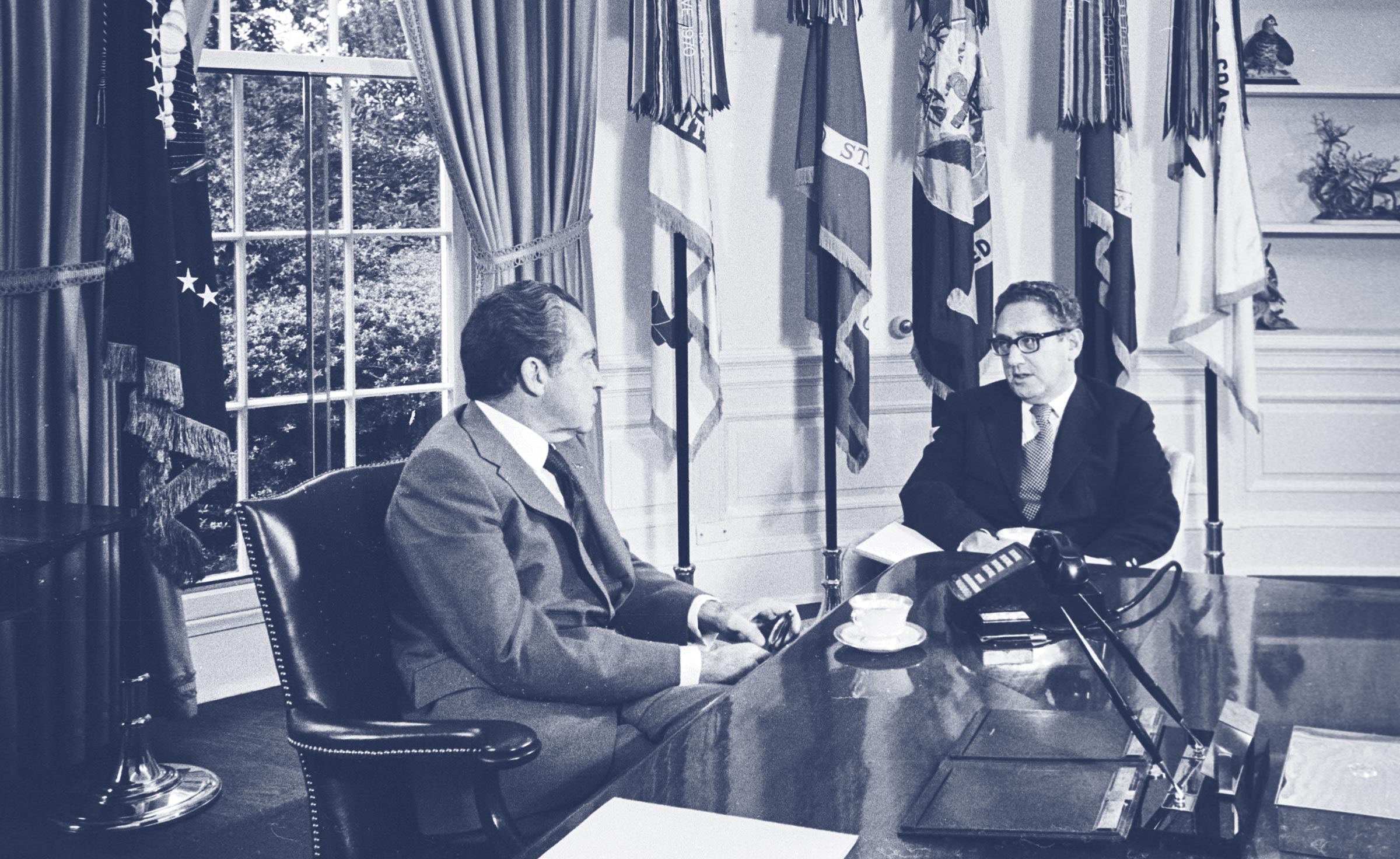 "Blow the safe and get it."

It’s not a tweet, but this one-liner from President Richard M. Nixon certainly ranks high on the list of memorable and bizarre presidential utterances.

The menacing order – part of a planned theft that foreshadows the skullduggery of Watergate – is among several remarkable conversations captured in Nixon’s tape-recorded responses to the 1971 Pentagon Papers leak memorialized in Steven Spielberg’s “The Post,” which is being released nationwide tonight.

The tapes are among those archived and analyzed at the University of Virginia’s Miller Center, where the Presidential Recordings Program makes once-secret Oval Office recordings from the Roosevelt, Truman, Eisenhower, Kennedy, Johnson and Nixon administrations available to the public.

While “The Post,” led by actors Meryl Streep and Tom Hanks, dramatizes the high-stakes newsroom decisions preceding the publication of the leaked documents in the New York Times and, later, the Washington Post, the Nixon tapes offer extraordinary insights into the drama unfolding simultaneously in the White House, complete with shadowy cover-ups, blackmail schemes and, yes, orders to blow open a safe from the commander-in-chief himself.

Even on audiotape, it is the stuff of movies.

Check out the five clips below to listen in on this extraordinary moment in history through Nixon’s own words.  Make sure to turn the sound on in the bottom right of the video player to hear Nixon's voice.

It’s early Sunday afternoon at the White House, and Nixon has just learned of a bombshell New York Times article detailing how three presidential administrations – those of Eisenhower, Kennedy and Johnson – systematically deceived the public about America’s deepening involvement in the Vietnam War – which, by then, was a pretty unpopular fight.

The article was based on a 7,000-page, top-secret Defense Department history of American involvement in Vietnam leaked to the newspaper by disillusioned former Pentagon employee Daniel Ellsberg. To keep the scoop secret, the Times kept it from most of its own employees and rented a suite at a Manhattan hotel where a small hive of reporters feverishly parsed the leaked information.

Despite this intrigue, Nixon’s first reaction was nonchalance, as his above phone call with Deputy National Security Adviser Alexander M. Haig Jr. records. He realized that the leaked information pertained to events before his inauguration and at first did not bother to read the full article.

Nixon’s nonchalance fades, however, as Haig supplies important background information that gives the 37th president cause for concern.

The leaked history, which the Times dubbed “the Pentagon Papers,” was commissioned during the Johnson administration by then-Secretary of Defense Robert S. McNamara to investigate the decision-making that led to America’s deep and costly involvement in Vietnam. In this first conversation, Haig suspected, incorrectly, that the leak was the work of McNamara’s successor, former Defense Secretary Clark M. Clifford, and two officials from the Pentagon division that produced the study, Morton H. Halperin and Leslie H. Gelb.

That suspicion was enough to alarm Nixon about the concealment of his own misdeeds in Vietnam, specifically his efforts to sabotage peace talks before the 1968 election, now known as the Chennault Affair, and his decision to bomb the Ho Chi Minh Trail in neutral Cambodia.

“Clifford, Halperin and Gelb had some knowledge of two of Nixon’s most damaging Vietnam secrets: the Chennault Affair and the secret bombing of Cambodia,” said Miller Center scholar Ken Hughes, author of “Chasing Shadows: The Nixon Tapes, the Chennault Affair, and the Origins of Watergate” published by the UVA Press.

“This was enough to make Nixon paranoid,” Hughes said. “He flew to the conclusion that they were going to leak his secrets next. That fear drove his extreme reaction to the publication of the Pentagon Papers.”

Three hours after that first phone call, Nixon is accusing the New York Times of treason.

In the above conversation with National Security Adviser Henry A. Kissinger, who later served as Secretary of State, both men betray some glee as they consider how poorly the papers reflect on the Democratic Party.

“Henry Kissinger called the Pentagon Papers ‘a gold mine’ and he had a point,” Hughes said. “The secret history ended before Nixon was elected, so it was most damaging to his two biggest Democratic rivals: John F. Kennedy and Lyndon B. Johnson.”

Despite this, both Nixon and Kissinger were increasingly worried by the Times’ decision to publish information furnished by the as-yet-unknown leaker.

“He was just afraid that if newspapers could publish his predecessors’ secrets, they would sooner or later publish his,” Hughes said.

Nixon, his consternation evident in his voice, calls the paper’s actions “treasonable.” He also reveals a bit of his growing personal fear, questioning Kissinger about the security of files documenting his owns sins in Vietnam,.

At the end of this conversation, it seems Nixon is both angry at the media and fearful of future leaks – a volatile combination that fuels his next decisions.

By Monday night, Attorney General John N. Mitchell had spent a furious 24 hours assessing legal options for preventing further publication of the Pentagon Papers, which the Times had teased as a multi-part series.

Above, Nixon, Mitchell and Kissinger discuss Ellsberg – now the primary suspect for the leak – and decide to threaten the New York Times with legal action unless publication ceases. They hope to make an example of Ellsberg by making the threat public after Congress votes on a bill pertaining to the war.

With a simple “Yep,” Nixon gives his final go-ahead for the plan, sparking a legal battle that would lead to the landmark free speech case that is the primary focus of “The Post” movie, one that the New York Times and the Washington Post would soon take to the Supreme Court.

The full conversation, however, reveals that Nixon’s decision was at least partially based on misinformation. Mitchell assures the president that the government has taken similar action before and even calls the move “low-key.”

Mitchell, Hughes said, was “grossly misinformed.” Nixon did not realize that by giving Mitchell the go-ahead, he was about to become the first president to attempt to exercise ‘prior restraint.’ The federal government had never before sought injunctions to block newspapers from publishing classified information, a move that gave the administration a way to threaten newspapers with prison if they published any more stories based on the Pentagon Papers.

“The presidential decision that set up the landmark Supreme Court case later in the month was made on the basis of bad information and less than 10 minutes of deliberation,” Hughes said.

Two days after the news broke, Nixon brings Sweden into his broadening conspiracy theory. He was less than pleased when Swedish Prime Minister Olof Palme said that the Pentagon Papers proved the U.S. government had paved the way to war by deceit. Those remarks, Nixon tells Kissinger, are just one more piece of evidence proving a broad conspiracy theory against his administration.

“He wouldn’t otherwise pay any attention to it. Somebody got to him,” Nixon says on the tapes. “Henry, there is a conspiracy. You understand?”

Kissinger, whether he understood or not, affirmed President Nixon’s seemingly firm belief that someone or many people were out to get him, setting the stage for more extreme action that would hurt Nixon’s administration far more than the Swedish prime minister’s comments ever could.

This last tape is certainly the most explosive.

Nixon, Kissinger and two White House aides, H.R. Haldeman and John Ehrlichman, discuss a plan to blackmail Nixon’s predecessor, Lyndon B. Johnson, so that Johnson will publicly condemn the Pentagon Papers leak and support Nixon in his quest to discourage government leakers.

In particular, the trio focus on a different set of classified Vietnam documents that Nixon believes will reflect badly on Johnson. The documents, according to aide Tom Charles Huston, are locked in a safe at the Brookings Institution, a nonprofit research organization in Washington, D.C.

Huston had developed a plan to break into the Brookings Institution and steal the documents. Nixon orders his aides to implement that plan “on a thievery basis,” closing his order with that memorable line:

“Get in and get those files. Blow the safe and get it.”

With that, the president is no longer just managing a scandal – he’s conspiring to break the law.

“Nixon would repeat this illegal order several times over the next few weeks, and take a fateful step to make it happen by creating the Special Investigations Unit, also known as ‘The Plumbers,’” Hughes said.

The Plumbers – a group that included former CIA and FBI agents – planned the Brookings break-in, but never received final approval from the White House. One year later, though, they would get approval for another ill-conceived break-in at the Democratic National Committee headquarters at the Watergate office complex.

The seeds of the Watergate scandal – among the biggest and most consequential scandals in American history – were sown over these four days in June 1971, as Nixon, growing more paranoid by the day, proved that he was willing to break the law to preserve his presidency.

It was the beginning of a downfall that even Spielberg could not script – and all of it was caught on tape.

It’s Copperhead Season in Virginia. Here Is What You Need to Know END_OF_DOCUMENT_TOKEN_TO_BE_REPLACED

What’s Next for UVA’s Class of 2022? END_OF_DOCUMENT_TOKEN_TO_BE_REPLACED