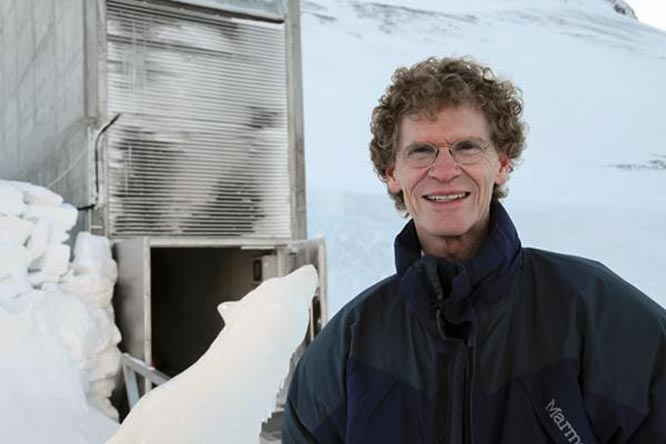 Cary Fowler has worked with the United Nations, the U.S. Plant Genetic Resources Board and numerous other universities and conservation organizations.

Morgan Carrington “Cary” Fowler, Jr., an American agriculturalist and global champion of crop diversity and conservation, is the 2018 recipient of the Thomas Jefferson Foundation Medal in Citizen Leadership.

Fowler is perhaps best known as the “father” of the Svalbard Global Seed Vault, which former United Nations Secretary General Ban Ki-Moon described as an “inspirational symbol of peace and food security for the entire humanity.”

Fowler proposed creation of this Arctic facility, headed the international committee that developed the plan for its establishment and led the committee overseeing its operations from inception to 2017. Protected by permafrost and rock, the seed vault currently provides ultimate security for more than 930,000 unique crop varieties, the biological foundation of agriculture and the raw material for all future plant breeding and crop improvement efforts.

“Dr. Fowler’s visionary work to protect agricultural diversity and mitigate future food crises will benefit many generations to come,” said Allan Stam, dean of the University of Virginia Frank Batten School of Leadership and Public Policy, which sponsors the Citizen Leadership medal. “We are honored to recognize Dr. Fowler for his leadership and dedication to food security worldwide.”

Fowler will be the keynote speaker at Jefferson’s birthday celebration at Monticello and give a private talk at UVA on Thursday, April 12.

In 2005, Fowler was chosen to lead the new Global Crop Diversity Trust, an international organization cosponsored by Food and Agriculture Organization of the U.N. and the Consultative Group on International Agricultural Research. This position carried international diplomatic status. During his tenure, he built an endowment of $130 million and raised an additional $100 million for programs to conserve crop diversity and make it available for plant breeding.

The Crop Trust organized a global project to rescue 90,000 threatened crop varieties in developing countries – the largest such effort in history – and is now engaged in an effort Fowler initiated with the Royal Botanic Gardens (Kew) to collect and conserve the genetic diversity of wild relatives of 26 major crops. He oversaw development of a global information system to aid plant breeders and researchers in finding appropriate genetic materials from gene banks around the world. These initiatives at the Crop Trust positioned the organization as a major path-breaking player in the global effort to adapt crops to climate change.

Prior to leading the Global Crop Diversity Trust, Fowler was the leader of the first team assessing the world’s plant genetic resources for the U.N.’s Food and Agriculture Organization, or FAO, the drafter and negotiator for the first FAO Global Plan of Action on the Conservation and Sustainable Utilization of Plant Genetic Resources, two-time special assistant to the secretary general of the World Food Summit, a professor at the Norwegian University of Life Sciences in Ås, Norway and a representative for various nations and international organizations at treaty negotiations and conventions on biological diversity and plant genetic resources.

Fowler was born in 1949 and grew up in Memphis, Tennessee, the son of a judge and a dietician. He was active in the civil rights movement in his youth and received his undergraduate degree with honors from Simon Fraser University in Canada. He earned his Ph.D. at Uppsala University in Sweden with a thesis on agricultural biodiversity and intellectual property rights. Fowler has lectured widely, been a visiting scholar at Stanford University and a visiting professor at the University of California, Davis.

He is the author or co-author of more than 100 articles and several books, including the classic “Shattering: Food, Politics and the Loss of Genetic Diversity” (University of Arizona Press), “Unnatural Selection, Technology,” “Politics and Plant Evolution” (Gordon & Breach Science Publishers) and “The State of the World’s Plant Genetic Resources” (UN-FAO). Most recently he wrote “Seeds on Ice: Svalbard and the Global Seed Vault” (Prospecta Press), winner of the Nautilus Book Award Gold Medal for best ecology/environment book of 2016.

Throughout his career, Fowler has also served on and chaired numerous boards, including the U.S. National Plant Genetic Resources Board, the International Maize and Wheat Improvement Center in Mexico, the national Livestock Conservancy and the Board for International Food and Agricultural Development, which he was appointed to by President Barack Obama. He is the chair of the Board of Trustees of Rhodes College and a board member of the NY Botanical Garden Corporation, the Lillian Goldman Charitable Trust and Amy P. Goldman Foundation. He remains associated with the Global Crop Diversity Trust as a special advisor and member of its finance and investment committee.

He is the recipient of a number of awards: Right Livelihood Award, Vavilov Medal, the Heinz Award, Bette Midler’s Wind Beneath My Wings Award, the William Brown Award of the Missouri Botanical Garden, the Meyer Medal of the Crop Science Society, the Visionary Award from the American Visionary Arts Museum, and three honorary doctorates. He is one of two foreign elected members of the Russian Academy of Agricultural Sciences and is a member of the Russian Academy of Sciences.

Fowler has been profiled by The New Yorker, 60 Minutes and more, and is the subject of an award winning feature documentary film, “Seeds of Time.”