Class of 2017: Graduating Student Says He Owes it All to University Singers 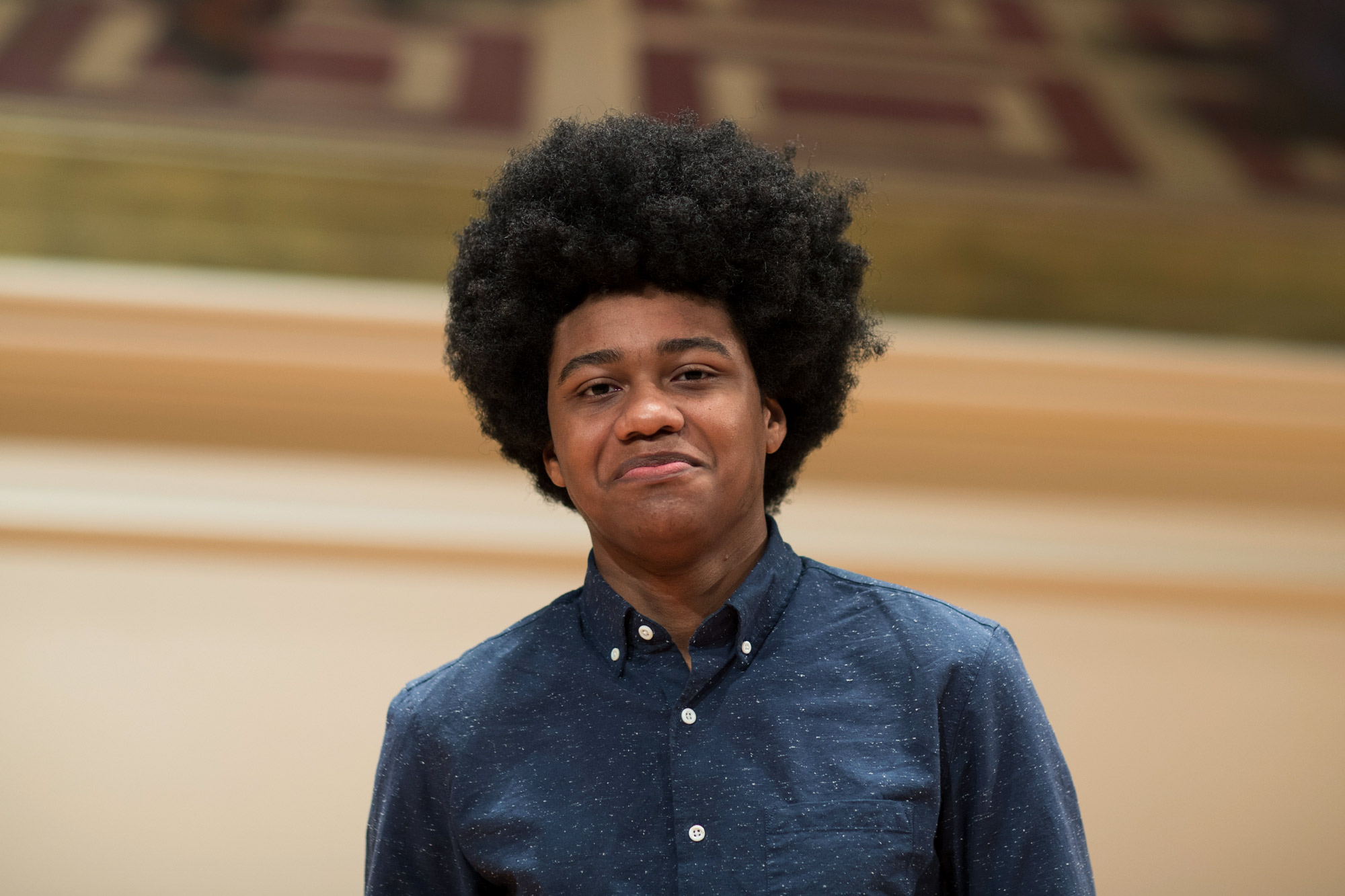 Walter Floyd made the most of his time in the music department, and he hopes to continue working in the arts and fundraising after graduation. (Photo by Dan Addison, University Communications)

Walter Floyd, a music major, has contributed much to the music scene in his four years at the University of Virginia. But his contribution may have taken a completely different shape if not for a fateful decision he made in middle school.

A member of University Singers, Floyd has worked as the publicity assistant and volunteer coordinator for the McIntire Department of Music. He also co-chaired the Music Arts Board that brought 9th Wonder, a Grammy Award-winning producer, DJ, college lecturer and social activist, to the University for a vibrant residency in April.

Floyd attributes his work in the music department to his involvement with University Singers, the University’s premier choral ensemble. The ensemble performs a cappella and accompanied choral literature, including major works with orchestra. This group was such an integral part of his college life that it’s hard to believe that there was an earlier time he considered not singing.

“So I ended up joining the choir out of laziness, and it was the right decision. I’ve been singing ever since.” 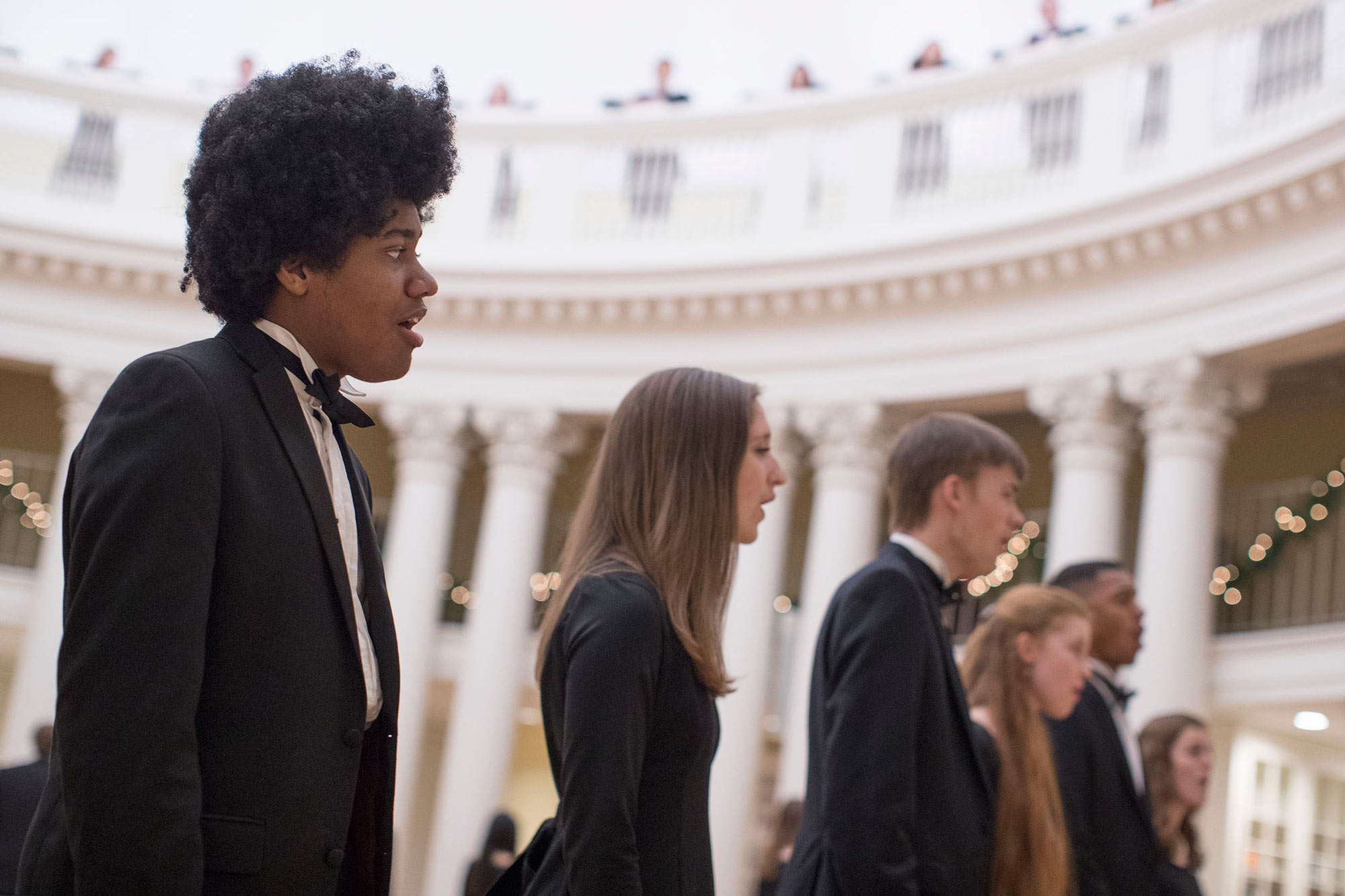 Performing with the University Singers propelled Floyd, left, toward a career in the arts. (Photo by Sanjay Suchak, University Communications)

Floyd knew that he wanted to continue singing when he came to the University from Ypsilanti, Michigan. He also quickly discovered that he wanted to be a part of the Music Arts Board. During his first year, the board sponsored a residency with American composer Philip Glass. This inspired him to get involved the next time it presented an artist performance or exhibition for residency – something that occurs on a three-year rotation.

The process was rewarding, he said. “That was the Music Arts Board’s big push, and I got to be the undergraduate co-chair for it. Last fall, we got together with the board members and drafted a list of 60 potential artists to bring in for our residency this spring. Once we narrowed it down to 9th Wonder, we spent all of this year planning it and making it happen.”

The process was stressful at times. “When we were calling 9th Wonder’s agency and talking with his manager, we were trying to get this settled a year in advance so we could start planning,” Floyd said. “One of the things they said was, ‘Wow, you guys want this really early. Usually this stuff is turned over in a few months.’ We were doing something on a large scale that, I think, major production companies do all the time. It was a first-time experience for many of us. At times, it was really stressful, but we also had faithful guidance from our advisers.”

9th Wonder performed, hosted workshops and mentored many music students. One of the things he stressed to those he advised was that while he wouldn’t always be there to help with their music, friends and other music students would be.

The experience only strengthened Floyd’s love of music and the University’s musical community, he said.

“As a performer, it’s important to think about what art means to you,” he said. “For me, it represents opportunity. Coming from a lower-income background, arts represented opportunity in the sense that it created a very real way for me to finance my college career.” Though he did not have a music scholarship, his involvement with the arts has helped Floyd out when seeking assistance.

“On top of that, it creates an opportunity for people with different struggles to express that and bring it to a popular forefront. Unfortunately, there are people who will say they listen to anything but country, or anything but hip-hop, or anything but metal. This denies artists the opportunity to be real and valid. I identify more with hip-hop because I am a black artist and can identify with a lot of the experiences these artists and producers are coming from.”

With graduation looming, Floyd said he wants to continue working in the arts. He hopes to get into fundraising, to create opportunities for future generations of students. This summer, he will get experience by fundraising with the UVA Health Foundation.

“This is kind of a pipe dream,” Floyd said, “but a long-term goal I have is to establish either my own endowment or foundation just to help students gain the resources they need to pursue any musical craft. If they need lessons for playing an instrument or voice, or maybe they just need good production equipment, I want to help out with that.

“Speaking from experience, I remember there were tons of times where I had certain ideas for a performance or music that I just couldn’t make happen early in my life because I didn’t have the resources. I think that I have been incredibly blessed to have the opportunities that I’ve had, and I want to be able to give that back to students in the future.”

Music has shaped Floyd’s life. Thanks to his experiences at UVA, singing will remain a part of his life.

“I think it’s important to find something that centralizes your experience in any setting, because that’s what prevents you from taking it for granted,” he said, “For me, that centralization comes from University Singers. When I look back to my time at UVA, that’s going to be the organization that I know gave my experience purpose.”

How a Single Email Changed a Life END_OF_DOCUMENT_TOKEN_TO_BE_REPLACED

Fall Is in the Air on Grounds END_OF_DOCUMENT_TOKEN_TO_BE_REPLACED

At UVA, There Is a Club for Everyone END_OF_DOCUMENT_TOKEN_TO_BE_REPLACED