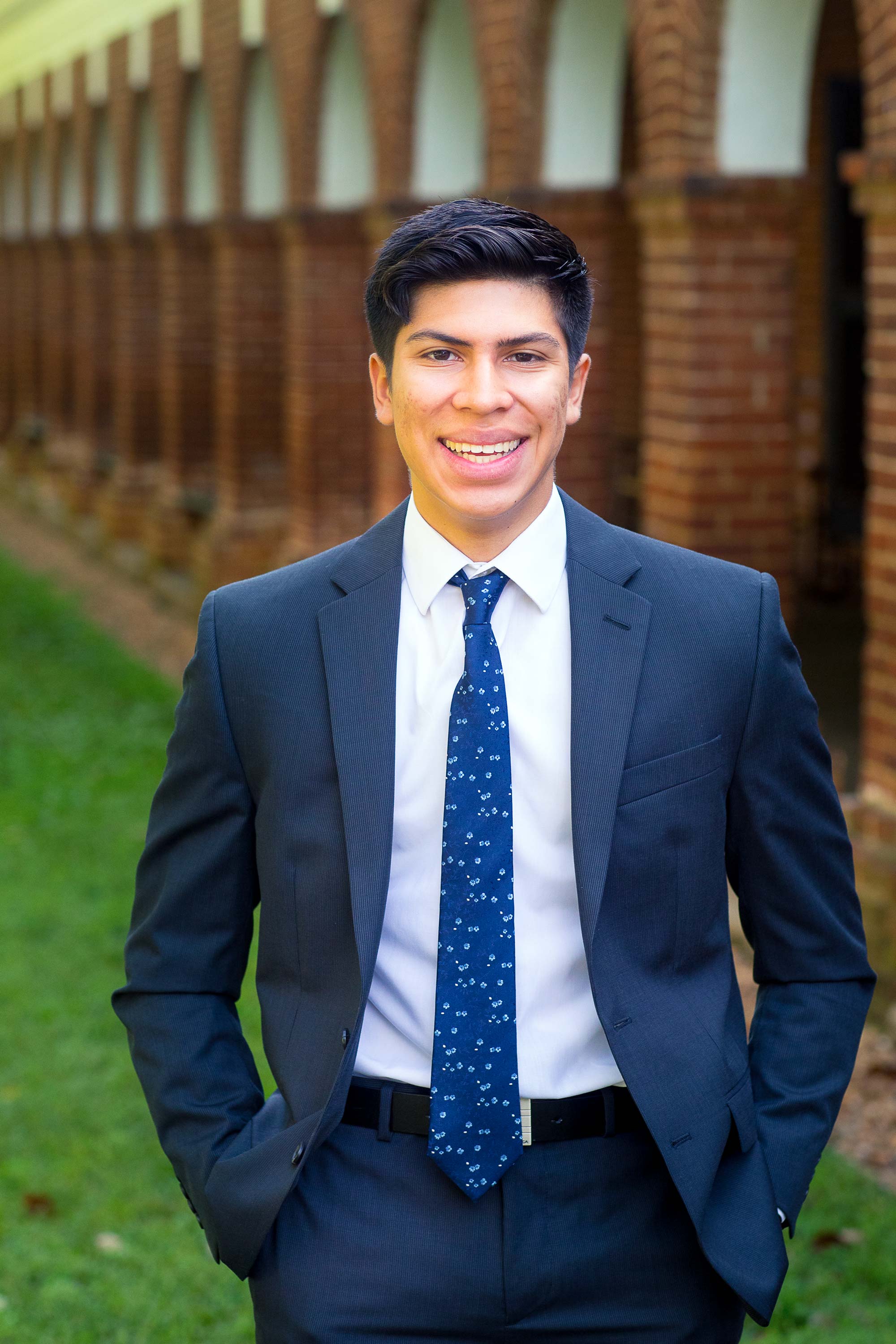 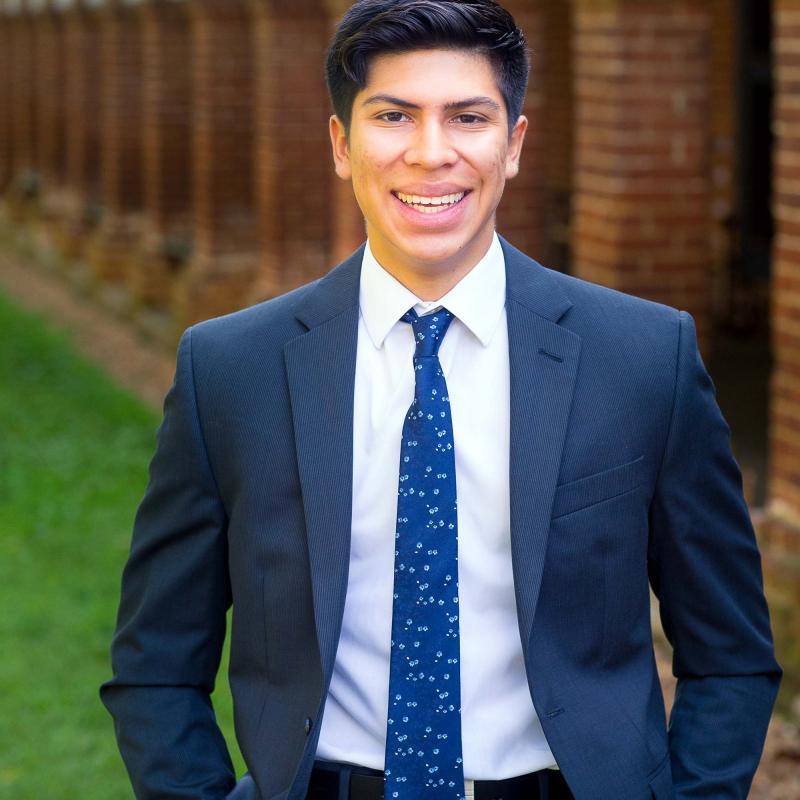 From celebrating last season’s UVA’s basketball championship with friends to starting a network for Hispanic and Latinx students at Batten, Brian Zuluaga says he’ll never forget his time as a UVA student.

Having grown up about an hour north of Philadelphia in Perkasie, Pennsylvania, Brian Zuluaga planned to stay in state for college.

As a first-generation student, Zuluaga thought that would be easier from a family perspective – he could remain close to his parents and younger sister – and that it would be more feasible financially.

But then Zuluaga attended the University of Virginia’s Days on the Lawn program for admitted students. 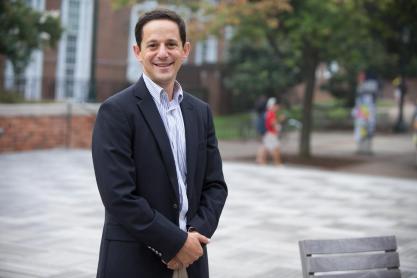 “We were just blown away,” Zuluaga said. “The whole experience was almost, like, enchanting in a way – just walking around the Lawn and everywhere on Grounds. And the academic side of UVA really attracted me. It was one of the most prestigious schools I got into.

“With a financial aid package from Access UVA, everything just fell into place, and that’s how I found myself in Charlottesville.”

The folks at UVA’s Batten School of Leadership and Public Policy are certainly glad about that. The fourth-year student, who will graduate next month, has left quite a mark.

“The reason I call him that is because he’s undeterred and he’s brave in the way he goes about things,” she said. “I’ve never run into a student quite like him. It’s rare to run into a student of his age who is as serious as he is about getting things done. He has almost what I would call a ‘grown-up’ vision of how to get it done.” 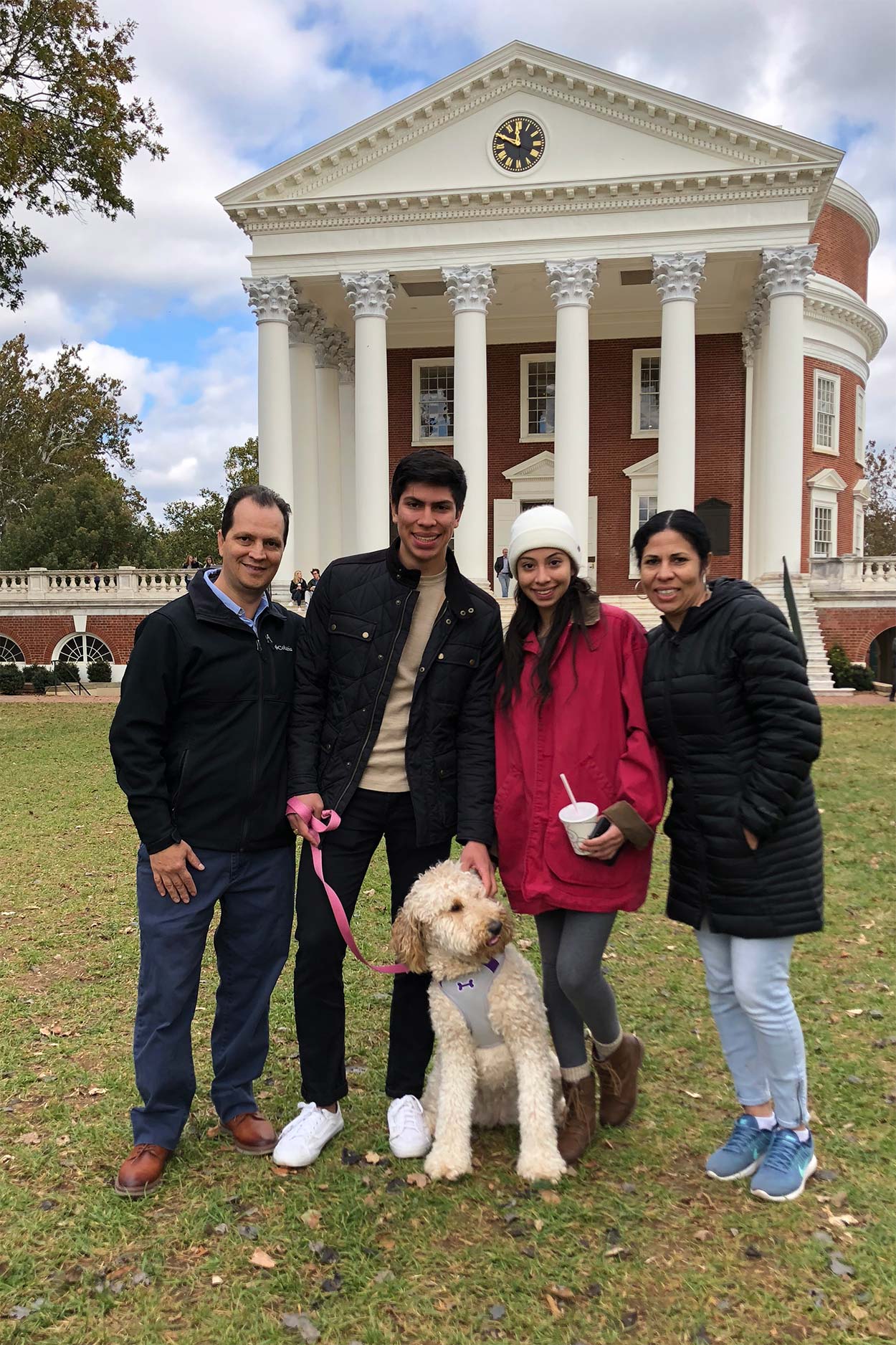 Zuluaga with his parents, sister and dog, Belle. (Contributed photo)

Zuluaga’s parents, Carlos and Adriana, are natives of Colombia who never attended college.

Carlos didn’t finish high school, but would eventually get his GED. He worked as a pharmacy associate and delivery man in his hometown of Medellin before, with a relative’s help, he immigrated to the United States in 1989. Adriana joined him three years later.

Brian was born in New Jersey, then lived in Florida before moving to Pennsylvania when he was in the third grade for his dad’s job as a lab technician at Johnson & Johnson.

Zuluaga, whose anthropology senior seminar project documents his father’s immigration to the U.S., said his parents have always been his inspiration.

“My dad was working side-by-side with guys who had college degrees,” he said. “It shows how much grit and resilience he had to gain the skills and the knowledge he needed.”

Zuluaga’s mother, who insisted that he learn both Spanish and English, also worked in at Johnson & Johnson before becoming a stay-at-home mom.

“I’m super grateful for that, because if she wasn’t there when I was at home, I don’t think I would have a lot of the ingrained values that I have,” he said.

“My parents have definitely been central to why I put so much effort in at college. I’ve never been one to, say, pull up Facebook on my phone during a class. I’ve always understood the value of the education I’m receiving. I see coming to UVA and getting this education as a privilege.”

Coming of age in a predominantly white town, Zuluaga said that he sometimes struggled to find people he could relate to. At UVA, he found them quickly.

In his first-year dorm, he met several Hispanic students who have become his best friends, along with others he has met through the Latinx Student Alliance and other programs, or just hanging out at the Multicultural Student Center.

“That’s honestly where I found my family,” Zuluaga said. “I could see my experience through other students. We’ve just understood each other on a different level. I had great friends during my high school experience, but didn’t have the same connection relating to identity, which is just crucial.

“I think that’s been one of most powerful things through my time at UVA.”

“Once you find your community, I think everything goes upward from there. You have that support system and a wealth of mentors who really can be your advocates in a way that can help carry you through your UVA experience.”

Zuluaga, who is double-majoring in public policy and leadership (at Batten) and anthropology (in the College of Arts & Sciences), said this time away from UVA due to the COVID-19 quarantine has made him more grateful for the friendships he’s made.

“I’ve had experiences and created memories that will last a lifetime,” he said. “I’m so grateful to have been at the University of Virginia. Even though my time was cut short, it really was a privilege.”

One of the things Zuluaga said he will never forget was the men’s basketball team’s amazing run to an NCAA championship last April.

A part-time DJ, Zuluaga had a gig for a sorority function on the same night as UVA’s regional final victory over Purdue University. Sorority members started getting mad at Zuluaga because he was huddled with buddies in the house watching the end of the game after the event was supposed to have started.

“We were going into overtime and they were all telling me, ‘Brian, start the music,’” said Zuluaga, laughing. “I was like, ‘I have to see this! I have to see this!’ I had to see how it would play out. Eight of us were all crowded around the cellphone. We actually had two phones because one would start lagging and then we would switch to the other. We were all freaking out.”

Zuluaga ended up starting his set about 20 minutes late. Fittingly, he kicked it off with the Queen anthem, “We Are the Champions.”

“By the end of the night, I think they ended up not being mad because we ended up winning the game,” he said, “and it wound up being a great event with a lot of people dancing.”

A week later, when UVA beat Texas Tech in the championship game, Zuluaga celebrated on the Corner with his friends and thousands of other Hoos fans.

“Every single one of those games,” Zuluaga said, “was just incredible.”

The same adjective can be used to describe the sheer number of activities in which Zuluaga has been involved during his time at Batten.

Name the committee and Zuluaga seemingly is on it – or has been on it.

“He has this way of bringing people together that is amazing,” Edson said. “Everything he says he’s going to do, he does.” 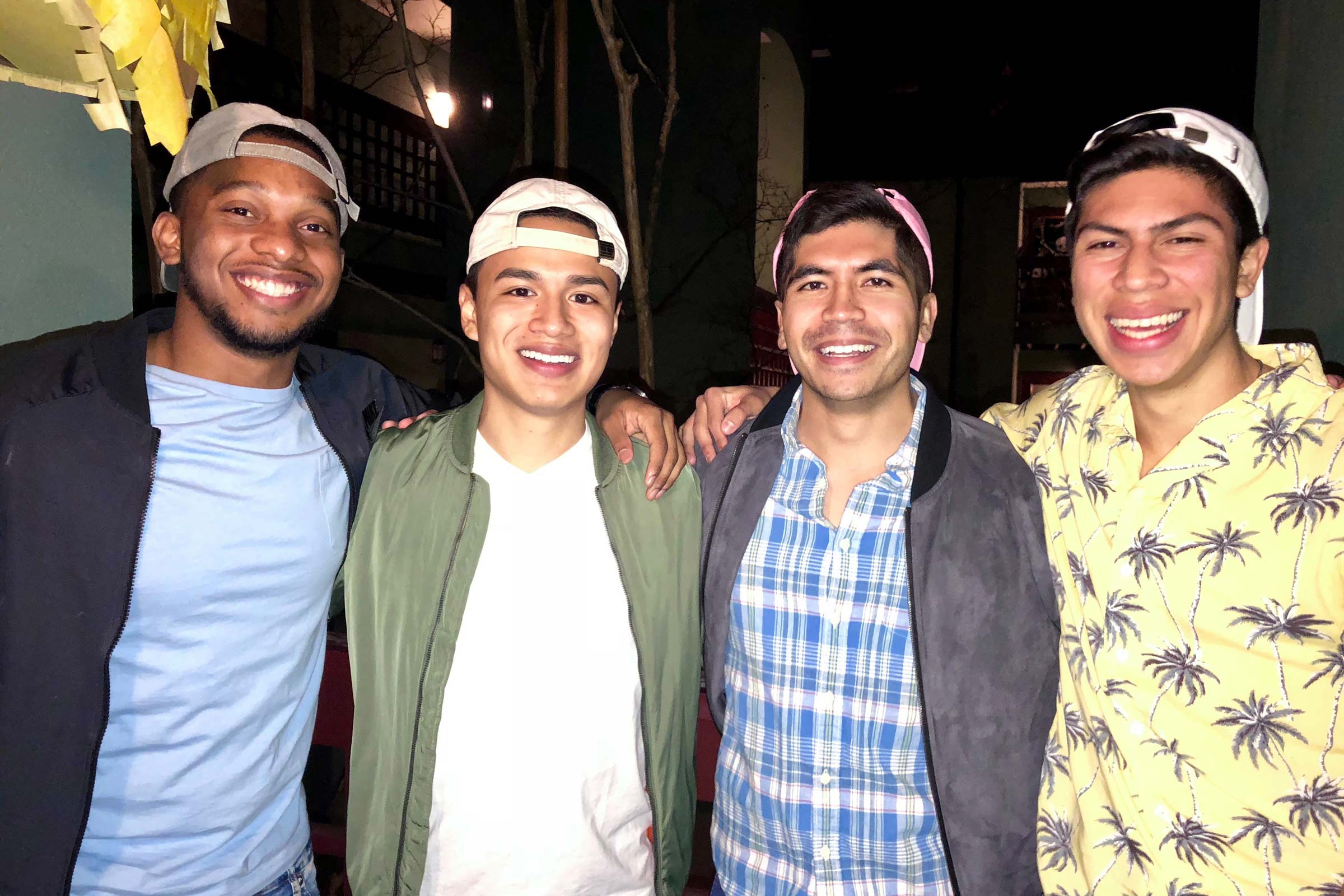 Creating the Batten Latinx Network has been one of Zuluaga’s proudest accomplishments – something that will endure long after his time at UVA, according to Vicki Gist, UVA’s associate dean of students and director of Multicultural Student Services.

“His efforts in creating a community of Latinx students at Batten have been very successful, in large part due to his obvious passion, dedication and commitment,” Gist said. “Over the past two years, he has nurtured and led the Batten Latinx Network in becoming an integral part of the Latinx student experience at Batten, while also contributing to the overall sense of community and belonging for Latinx students in general.”

Edson said she was “blown away” when she first learned of Zuluaga’s plan for the network, which he presented in the form of a policy memo after only a couple months at Batten.

Edson thought Zuluaga was going to pitch an idea about creating a community for current Batten Hispanic and Latinx students. Instead, he told her he wanted to start socializing students well before they had even made up their minds about coming to Batten.

Zuluaga, who also serves as a mentor in the Hispanic/Latinx Peer Mentor Program, said a quote he recently came across explains why he felt so strongly about starting the network: “The true meaning of life is to plant trees under the shade you do not expect to sit.”

“I see myself in so many first-years,” Zuluaga said. “They’re living through the same things I did, so if there’s any way we can ease their path, I think it’s so important and a responsibility for upperclassmen.”

Zuluaga’s advice for first-year students – no matter what their ethnicity or background – is to find their community.

“Once you find your community, I think everything goes upward from there,” he said. “You have that support system and a wealth of mentors who really can be your advocates in a way that can help carry you through your UVA experience.”

As for his next step, Zuluaga isn’t totally sure. He’s currently looking for different full-time jobs and fellowships in Washington, D.C.

Edson, for one, said she will pay close attention. “There are a handful of people who I know will do big things in life and I’m curious to see what they do,” she said. “He’s one of them.

“We’re lucky. He’s made Grounds a much more special place. There’s no other way to put it. He’s rare.” 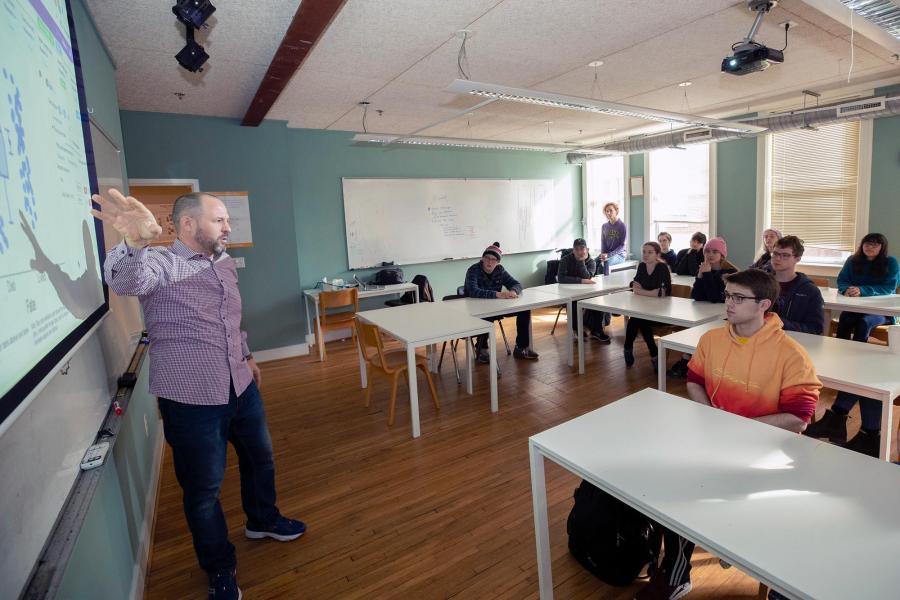 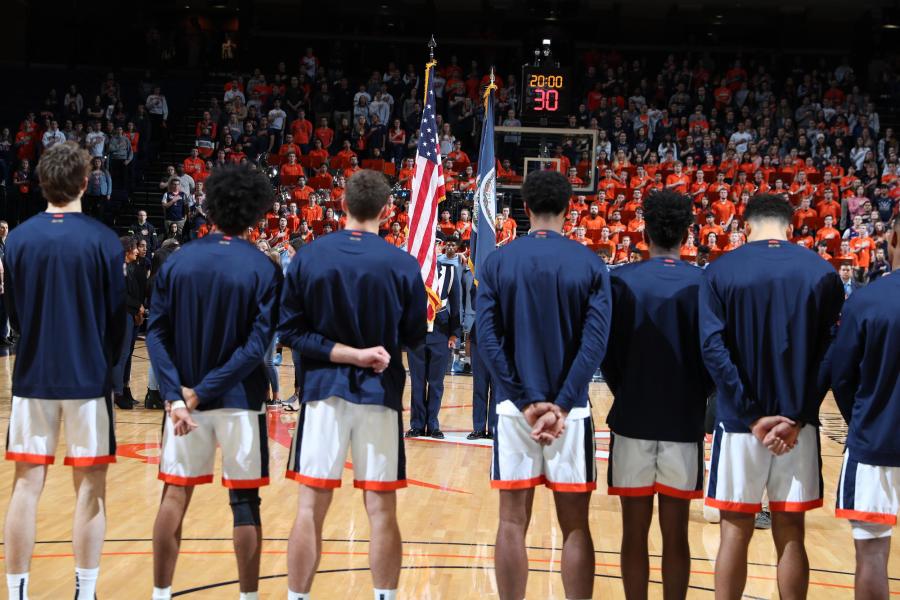 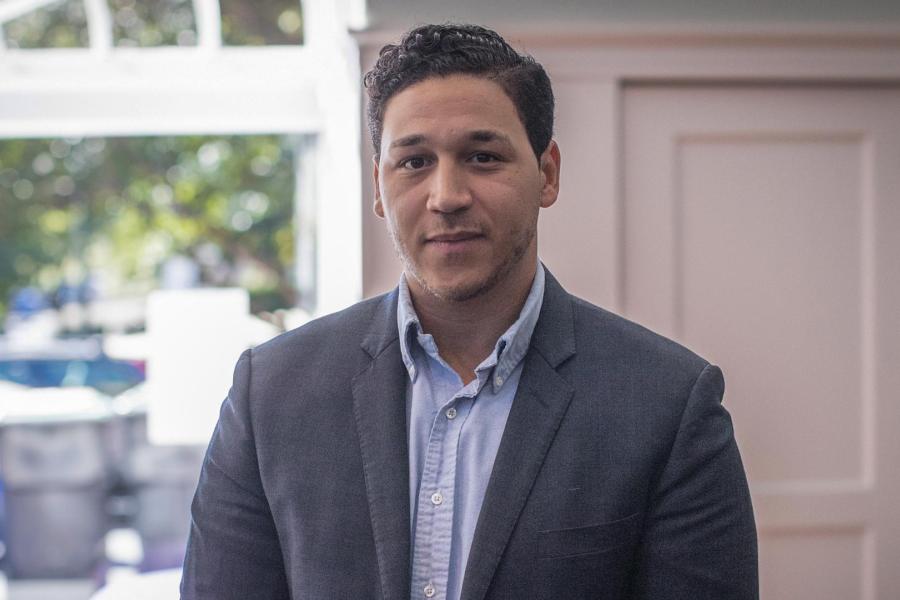