Class of 2022: Math Proves to Be the Fun Choice for Spencer Martin 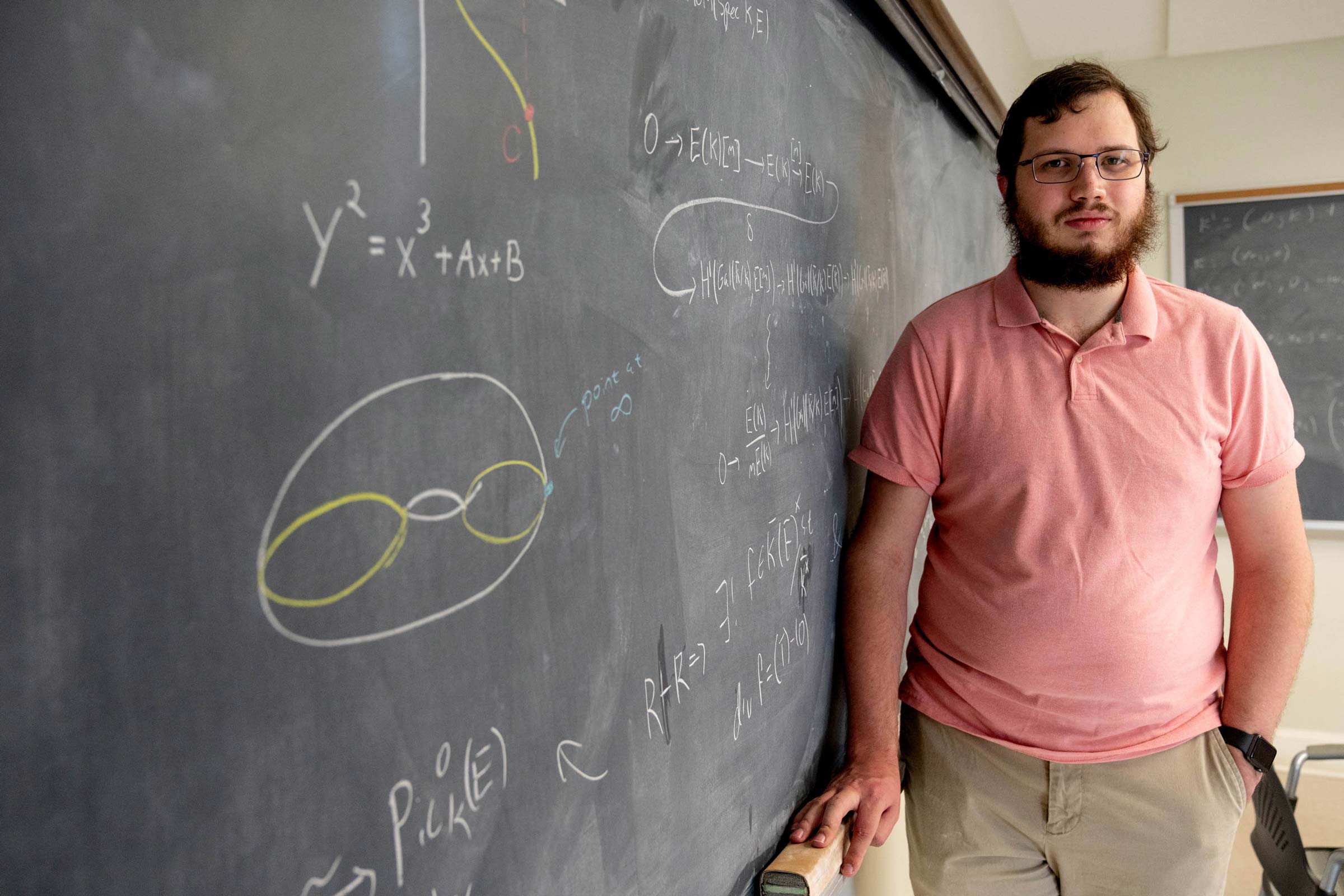 The sound of chalk shooshing across a blackboard is music to the ears of University of Virginia student Spencer Martin. His favorite brand, Hagoromo, produces a quiet hush instead of a shrill squeak.

It may look like any other piece of schoolhouse chalk, but Hagoromo bills itself the “Rolls Royce of chalk.” It’s made by a Korean manufacturer that rescued the recipe when the original Japanese company closed. A package of a dozen sticks sells on Amazon for $9.

But when Martin first came to Grounds, the hush of Hagoromo wasn’t clearly in his path.

Martin was torn between a focus on engineering, computer science or math. An Echols Scholar, he embraced UVA because of the academic freedom, he said, and quickly grew to love the atmosphere on Grounds. As he went on, the more math classes he took, the more he enjoyed the discipline. 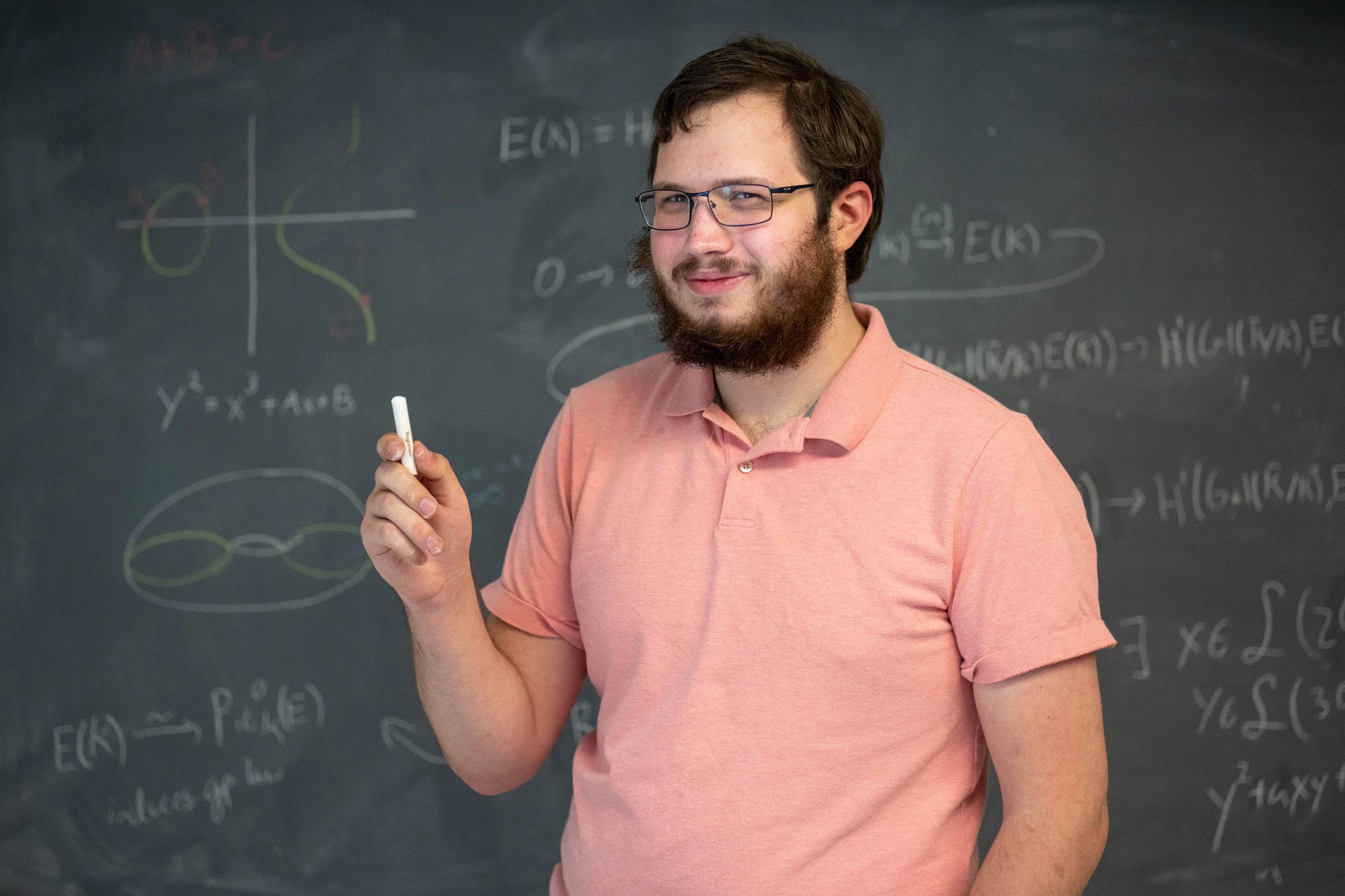 Martin was one of the very first students who Ono, the Thomas Jefferson Professor of Mathematics, met when he came to UVA in fall 2019.

“To say that Spencer is a special, advanced, gifted math major would be an understatement,” said Ono, who chairs the department and has been named one of the top 20 most influential mathematicians of the past decade. Ono said he was surprised at the questions Martin had about very advanced mathematics, considering he was only a second-year undergraduate at the time.

Also earning a minor in computer science, Martin has been the top student in every math class that he’s taken, Ono said. In addition, he passed the Ph.D.-level qualifying exam last year as a third-year student.

“Working with him over the last three years – despite the fact that it’s been during COVID – will certainly be among my fondest memories of this very difficult period,” Ono said.

After graduating May 21, Martin will pursue that mathematics Ph.D. at the University of California, Los Angeles, chosen from among several offers from top schools. There, he will join another prize-winning friend in math, Zachary Baugher, who graduated from UVA last year.

Martin was first drawn to mathematics in high school through the mystery of prime numbers –numbers like 3, 7, 37 – that have just two factors, 1 and the number itself. Going deeper, “prime numbers are defined by an abstract property, not a formula, and so to study them, you need to use a different set of tools than you might learn in your high school calculus or trigonometry class,” Martin said.

“It was a totally different kind of problem-solving that was fun.”

He also found fun and camaraderie with professors and peers in UVA’s math department. With 34 professors and 18 lecturers and postdoctoral fellows, the department typically comprises about 250 majors and 50 doctoral students.

Martin leads the Math Club as co-president. The group includes everyone from first-year students interested in math to advanced fourth-year majors. Club events have included lectures and panel discussions featuring graduate students and faculty, and activities like board games, movie nights, a “Pi Day” featuring pies, and a T-shirt design competition.

The club is “a way to connect students outside the classroom, foster interest in math and develop community. We bribe people with pizza,” Martin joked. “We have student presentations. And undergrads are matched with graduate students for a directed reading program,” he said.

Last summer, he participated in the Ono’s Research Experience for Undergraduates program, and his work, in collaboration with students from other universities, resulted in two professional papers in number theory, one already accepted for publication.

“Beyond learning a ton and having a lot of fun, the experience solidified my own self-confidence in regard to math,” said Martin, who also published a paper with other co-authors in the summer of 2020.

Most recently, he and fellow student Nathan Li were awarded the E.J. McShane Prize, a math department prize for fourth-year students who have demonstrated outstanding achievement. Last year, Martin was one of five students awarded the Edwin E. Floyd Prize, given annually to second- or third-year majors who show exceptional promise in mathematics.

Assistant professor Evangelia “Valia” Gazaki, Martin’s adviser for his distinguished major’s thesis, said, “What I admire most about him is … he can go really deep into serious mathematical arguments. He has a great intuition that often exceeds mine, although I have so many more years of experience than him.”

Martin’s thesis focuses on “The Arithmetic of Elliptic Curves,” about which he said, “Elliptic curves roughly [depict] solution sets to certain polynomial equations … foundational to modern cryptography and number theory. They play an important role in things as varied as online banking and the proof of Fermat’s Last Theorem.”

Saying it has been a privilege to work with Gazaki, Martin said, “She has been incredibly supportive, pushing me to work harder when I should, keeping me grounded, and giving me a sense of perspective for what I can look forward to learning in the future.”

To the list of faculty mentors, Martin added Julie Bergner – who was “incredibly formative in developing my mathematical tastes and inclination toward algebraic topology” – and Craig Huneke, with whom he took two 4000-level classes his first semester, “both of which really captured my imagination and helped me decide to major in math.”

Outside of math and computer programming, cooking is his main hobby, Martin said. Most recently he has been testing Chinese, Japanese and French recipes. He would like to venture into Indian or Ethiopian cuisine, he said.

Growing up in Blacksburg, where his parents studied engineering at Virginia Tech, Martin said they supported his academic interest and helped him find college students he could work with outside of classes.

But he’s not the only math whiz in his family. His brother, almost two years younger, majored in statistics and machine learning at Carnegie Mellon University, and also will graduate from college this May.

When Less Is More: How Harnessing the Power of Subtraction Can Add to Life END_OF_DOCUMENT_TOKEN_TO_BE_REPLACED