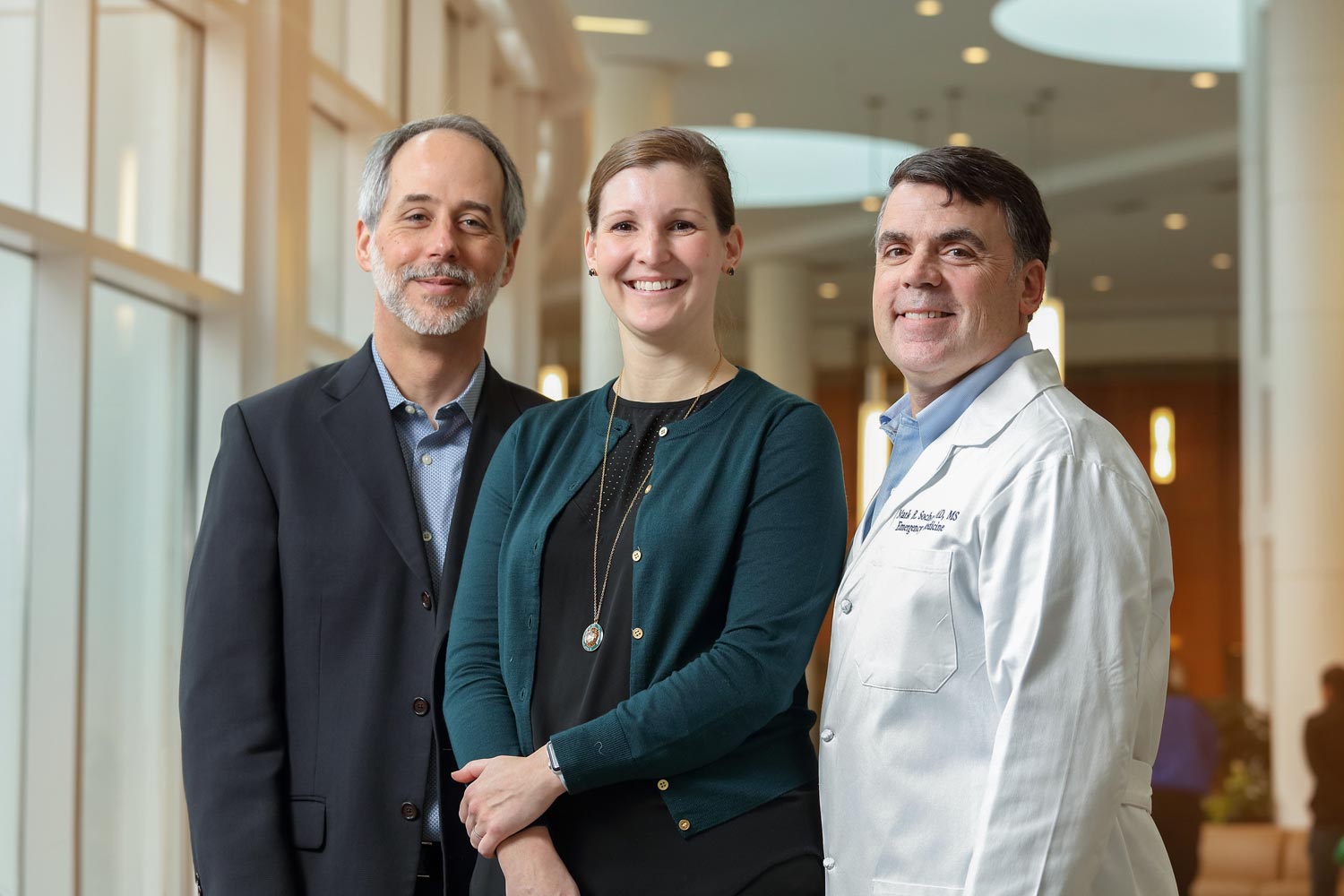 Engineering has always been an integral part of medicine. Walk into a hospital or a clinic, and every aspect of care – from the devices physicians use to diagnose and treat disease to the vaccines and pharmaceuticals they prescribe – bears the imprint of engineers.

The University of Virginia’s new Engineering in Medicine initiative is designed to jump-start medical innovation by explicitly fostering partnerships between engineers and clinicians.

“Many of our best weapons in the fight against common diseases, such as pacemakers and stents to treat heart disease, or mammography to detect breast cancer, developed at the interface between engineering and medicine,” Jeffrey Holmes, professor of biomedical engineering and medicine, said. “This same interface holds enormous promise to deliver the next generation of advances.”

Holmes leads UVA’s Center for Engineering in Medicine, which was funded in mid-2017 with a $5 million Strategic Investment Fund grant from the University and another $5 million in matching funds from UVA Engineering and UVA’s School of Medicine. The center has already begun to leverage these funds to launch a series of ambitious interdisciplinary projects that bring engineers together with their counterparts from the schools of Medicine and Nursing and the College of Arts & Sciences. The center plans to fund two groups of projects annually; the second round of proposals was due Feb. 15.

The center’s first group of seven projects, chosen from among 35 proposals, highlights the potential to forge high-impact collaboration across a broad array of health care issues. Among other projects, researchers are developing the fast algorithms needed to make next-generation MRI techniques practical for treating heart disease; creating ultrathin, high-tech skin patches to deliver pain medications locally, reducing side effects and risk of addiction; and exploring the use of computational models and viral gene delivery to improve healing after heart attack.

“The most exciting thing about the proposals was how diverse they were,” Holmes said. “I have been at UVA for 10 years, and I thought I knew the range of work that people were doing here, but there were many surprises.”

Holmes was also impressed by the response to his call for proposals. “We seem to have struck a chord,” he said. “Within hours, I began receiving messages from faculty looking for collaborators to help them pursue new ideas. This was gratifying because the most important thing I can do as a center director is to help people find those partners.”

The effectiveness of Engineering in Medicine funding as a way to cut across disciplinary boundaries is a point that Philip Chow, an assistant professor of psychiatry and neurobehavioral sciences, underscores. Chow is part of a team of faculty members from the departments of Systems and Information Engineering, Public Health Sciences and Surgery who are using seed-grant funding to create smartphone-based interventions to help alleviate the depression and anxiety affecting caregivers of cancer patients.

“It is our collective experiences that allow us to tackle significant issues from a fresh perspective,” Chow said. “Without the support of an Engineering in Medicine grant, our interdisciplinary collaboration might not have been possible.”

Seed funding is also critical because of the novelty inherent in these interdisciplinary projects. Center researchers have sought out counterparts from other disciplines precisely because they believe their combined efforts will generate a new approach to advancing knowledge. Traditional funding agencies generally won’t support these projects without preliminary data. Engineering in Medicine funding gives researchers the opportunity to gather this evidence.

It was precisely for this reason that a coalition of faculty members from the School of Nursing, the Department of Electrical and Computer Engineering and the Division of General, Geriatric, Palliative and Hospital Medicine saw value in applying for an Engineering in Medicine grant. Their ultimate goal is to develop tools to help caregivers and cancer patients manage pain in the home, but in order to do so, they need to better understand the behavioral and environmental factors that predict patient pain and caregiver stress. The grant funds the use of in-home mobile wireless sensing technology developed at UVA to secure this baseline data.

“The Engineering in Medicine program is particularly valuable for a project like ours,” said Virginia LeBaron, an assistant professor of nursing. “It provides a mechanism to collect robust pilot data that can help inform a larger, external grant proposal.”

At its most basic, an Engineering in Medicine grant at the beginning stage in a project’s development is a vote of confidence in the researchers’ concept. This was a benefit cited by researchers exploring new ways to diagnose chronic intestinal infections in children that result from poor hygiene.

The inflammation caused by these infections can undermine children’s physical and cognitive development by reducing the nutrients they absorb; it can also leave them vulnerable to deadly disease by impeding the absorption of oral vaccines.

A key step in addressing this problem is being able to distinguish between biopsy images of healthy intestinal tissue and those taken from children with hygiene-related and other forms of intestinal inflammation.

Dr. Sana Syed, an assistant professor of pediatrics, and Donald Brown, a professor of systems and information engineering and former director of the University’s Data Science Institute, plan to apply “deep learning,” a class of convolutional neural networks, to distinguish among the samples and help identify their key features. They are using deep learning in relatively novel ways to assess images that are particularly complicated.

“Innovative, creative ideas often need a show of faith,” Syed said. “In addition to funding, that is precisely what an Engineering in Medicine grant provides.”

Before the Engineering in Medicine initiative was announced, many of the researchers who ended up being funded in the first round had been meeting informally and exchanging ideas, though with little real hope of getting them off the ground. The seed grant program provided an incentive for these researchers to refine their thoughts and find the additional partners needed to realize their goals.

For instance, LeBaron had been meeting for more than a year with John Lach, a professor of electrical and computer engineering, UVA Engineering’s director of cross-cutting research and an expert in wearable, wireless health monitoring; and with Dr. Leslie Blackhall to discuss tools for cancer pain. Engineering in Medicine “provided the perfect mechanism to solidify our collaboration and move the idea forward,” she said.

The same situation held true for another project Lach has joined: devising implantable, breath-powered sensors that would warn asthma sufferers of an impending attack. He and Daniel Quinn, an assistant professor of mechanical and aerospace engineering with a joint appointment in electrical and computer engineering, had begun talking about harnessing fluid flows in the body to power implantable sensors when Quinn arrived on Grounds two years ago as a job candidate. Connecting with Dr. Larry Borish, a professor in the Division of Allergy and Clinical Immunology, provided a context for applying their ideas.

“Because of the tight turnaround time, the first round of Engineering in Medicine proposals served mainly to energize existing teams,” Lach said. “Nonetheless, the example of these teams and the level of innovation they represent is setting in motion a virtuous cycle, inspiring new teams to coalesce around audacious ideas – and in the process positioning UVA as a paradigm-shifter in health care.”

Netflix to Add Ads. Why This Could Be a ‘Game-Changer’ for Your Viewing Experience END_OF_DOCUMENT_TOKEN_TO_BE_REPLACED

What’s Next for UVA’s Class of 2022? END_OF_DOCUMENT_TOKEN_TO_BE_REPLACED