Everybody Knows This Hoo’s Name, and They’re Always Glad She Came 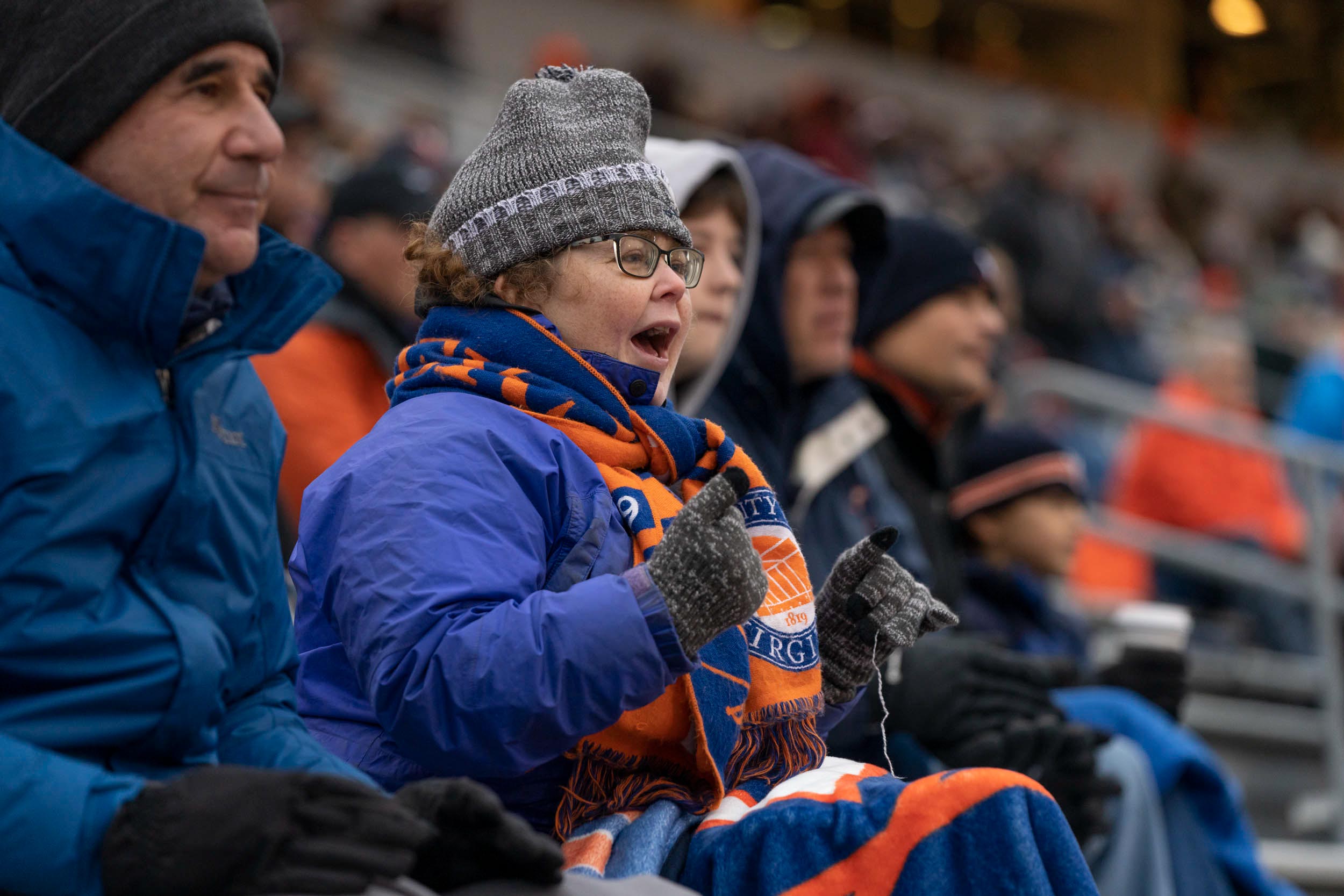 If there’s something pertaining to UVA athletics happening, you can bet Meryl Kahn is in attendance. (Photo by Sanjay Suchak, University Communications)

How do you know when you’ve made your mark as a Hoo?

When University of Virginia head coaches Tony Bennett, Bronco Mendenhall and Brian O’Connor hit their brakes, roll down their car windows and stop to talk with you just because they noticed you walking down the street.

Or when Dave Koehn, the host of Bennett and Mendenhall’s radio shows, gives you an on-air shout-out. 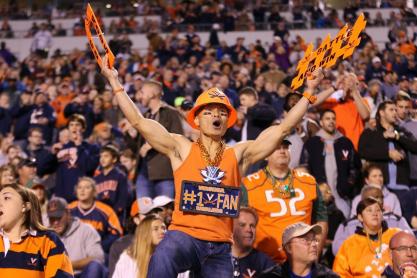 Or when UVA Director of Athletics Carla Williams speaks glowingly of you.

Or when other UVA fans whom you’ve never met just want to introduce themselves to you or sit next to you at a game.

Or when former players and coaches talk about you in passing, just in general conversation, like you are a member of the family.

Meryl Kahn is a member of the family.

She has been since she was 5 years old and joined the Cavalier Kids Club, a group of youngsters who cheered on the women’s basketball team at University Hall. It was then that Kahn  became pen pals with the team’s star identical twins, Heather and Heidi Burge.

Kahn has been a Hoo through and through ever since.

Kahn, a UVA Darden School of Business alumnus, frequently took Meryl to games with his late wife, Cathy, and his eldest daughter, Megan.

“It was something she could gravitate to,” he said, “and has just been a godsend in her life.”

A few years ago, the Burge sisters saw Kahn at a team reunion and made a beeline for her.

“They said, ‘We still have all your letters you wrote us!’” Meryl Kahn said. 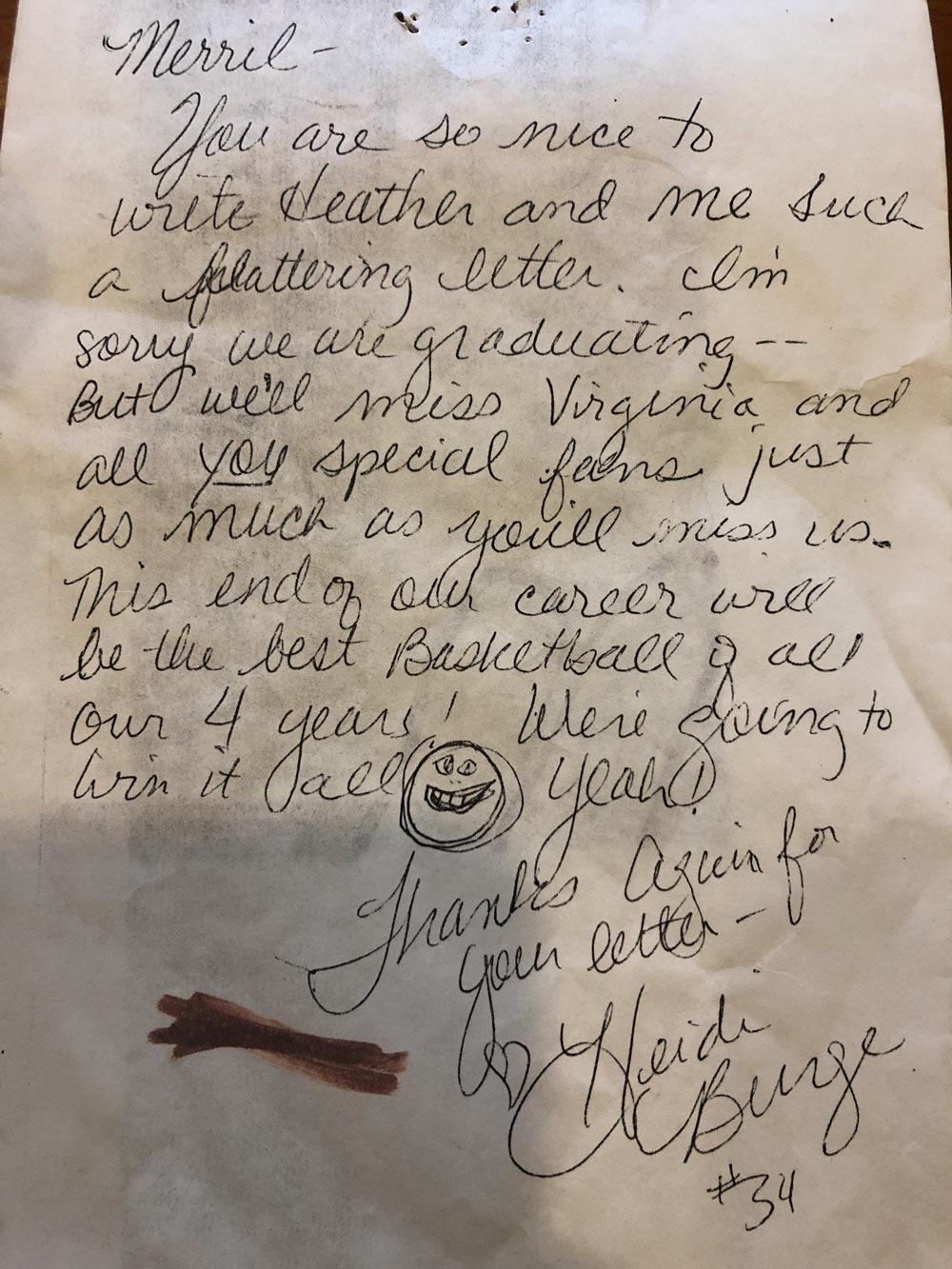 Bill Kahn, who graduated from Darden in 1976 before launching his own sporting goods business, has been a UVA basketball and football season ticket-holder for 40 years.

But Meryl hasn’t limited herself to those sports. If you’ve ever attended a lacrosse, soccer or baseball game, there’s also a good chance you’ve seen – or heard – her. The same holds true for her attendance at the radio shows, of which she’s only missed a handful over the last decade, her absences due to conflicts with – you guessed it – UVA games.

“There was one time when I missed a show [in 2018] for some reason and Bronco was like, ‘So where were you last week?’” said Kahn, breaking into a wide smile.

Last Thanksgiving, Kahn, who is a preschool teacher’s assistant at the Charlottesville Day School, missed another show while traveling to see relatives in Pittsburgh.

“Meryl’s not out here tonight,’ Koehn told his live radio audience that night, “but she’s listening somewhere in Pittsburgh, I’m sure.”

On Monday’s show, Bennett was talking about former player Jontel Evans when, suddenly, he brought up Meryl just because he knew she is a big fan, having worked with Evans at Charlottesville Day School.

“We all know everything about Meryl,” said Koehn, laughing. “She gets talked about semi-regularly on the show. It is like a family feel with our shows. You’ve got the regulars who are there all the time, and Meryl is one of the great regulars who’s been coming forever. 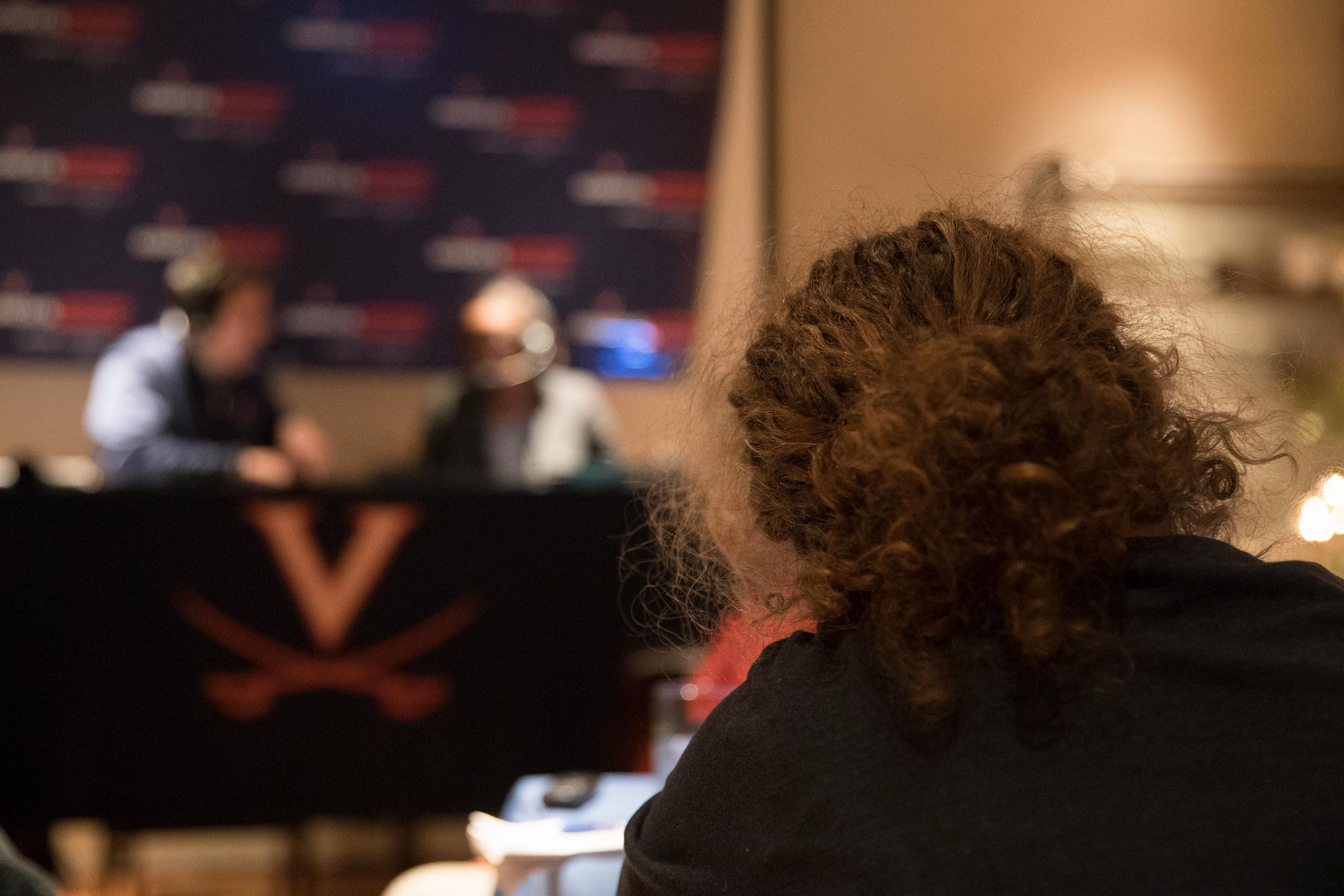 Kahn is a regular at Bennett and Mendenhall’s radio shows. (Photo by Dan Addison, University Communications)

Kahn, 35, often gets to the weekly radio shows at the Boar’s Head Inn several hours early so that she can get the table closest to where the coaches will be talking.

When the show begins, Kahn is easily the most boisterous audience member. “You can hear her hooting and hollering in the background,” said Abby Perry, a preschool teacher with whom Kahn works.

That was the case during a show in December when Koehn welcomed Carla Williams to the microphone to discuss the University’s progress on new athletic facilities.

Koehn calls Kahn the “ringleader” of his audience.

“She gets everybody fired up,” Koehn said. “When we do giveaways and prizes, you’ll hear her [on the air] say, ‘Oh! I never win!’ even though she won like the week before.

“She’s just very excitable and so into it. UVA sports is such a big part of her life. It’s really cool.”

Kahn, who wears UVA clothing almost everywhere she goes, has almost an encyclopedic knowledge of Cavalier sports. She can quickly rattle off names from Bennett’s first-ever recruiting class, explain in great detail the factors that led to the women’s soccer team’s loss in last season’s NCAA tournament and tell you that former football player Ras-I Dowling is now an assistant coach at the College of William & Mary.

All in the same breath.

“If you need to know anything about any UVA sport, she’s the one in the know,” said UVA fan Leslie Sullivan, who usually sits with Kahn at the radio shows. “She always knows what’s going on.”

“I don’t think they make a bigger fan than her,” Perry said. “She’s so devoted.”

Kahn said the past year in UVA sports has been quite the ride. “Between winning it all in basketball and lacrosse … it’s been crazy,” she said. “I get so into it. I start yelling and my dad has to tell me to calm down.”

Last month, at the premiere of the new UVA baseball documentary at the Paramount Theater on the Charlottesville Downtown Mall, Kahn had a lengthy chat with Williams.

“She has just the sweetest heart,” Williams said. “I love seeing her at all of our events. She’s super passionate. It doesn’t matter what the sport is – I see her at everything.” 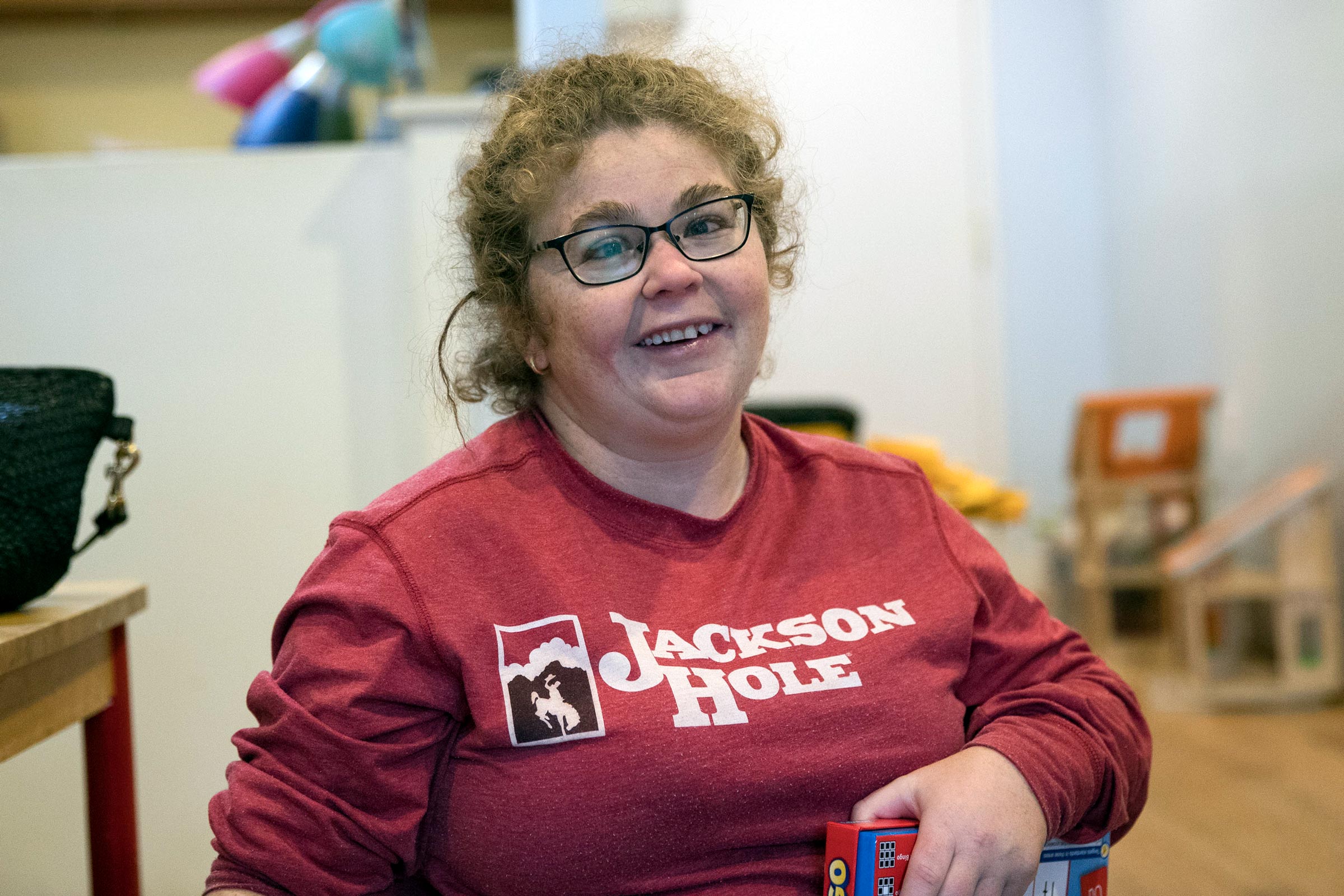 Kahn has been coming to UVA games since she was 5 years old. (Photo by Dan Addison, University Communications)

Between 2008 and 2010, Kahn’s fandom grew to another level. That’s when she served as a manager under former UVA women’s basketball coach Debbie Ryan.

“She was a hit right off the bat,” Ryan said. “The funny thing was every day she would go home and tell her dad if she got yelled at by me or not. That seemed to be the real test of, ‘Am I making it or not?’ because ‘If I got yelled at, I’m doing great.’ She always wanted to be treated just like one of the other managers.”

Ryan, who doesn’t recall Kahn ever missing a practice in her two seasons with the team, said Khan was “beloved.”

“Everyone looked out for her,” she said. “And she had specific duties during games that she did extremely well. She was the type of person who was just constantly asking for more and, ‘What else can I do?’

“She was a step ahead of me. She was somebody who never allowed anything that was different about her to get in her way. Ever. It just didn’t. She just strove to be the best basketball manager she could be.”

Former UVA player Chelsea Shine said Kahn was selfless. “You could tell how much she loved women’s basketball,” she recalled, “but as my relationship with her continued after I was done playing, I realized it wasn’t just UVA hoops she loved. … It was any and every UVA sports team. She is one of the most dedicated and supportive fans I know.”

Now an ESPN broadcaster, Shine looks forward to seeing Kahn at games she is working.

“She is constantly asking about family and how we are doing,” Shine said. “She always wants to know what my broadcasting schedule is for each year and tunes in as much as she can. She is positive and supportive and extremely dedicated.”

Kahn frequently talks to O’Connor before home baseball games. A few years ago, when the team switched their dugout from the third-base line to the first-base line, Bill Kahn switched the location of his family’s season tickets so that his daughter’s conversations with the Hoos’ skipper could continue.

O’Connor was pleased about that. “One of my favorite parts of game day at Disharoon Park is seeing Meryl,” he said. “You can always count on her to have a smile on her face and positive words about the Cavaliers.” 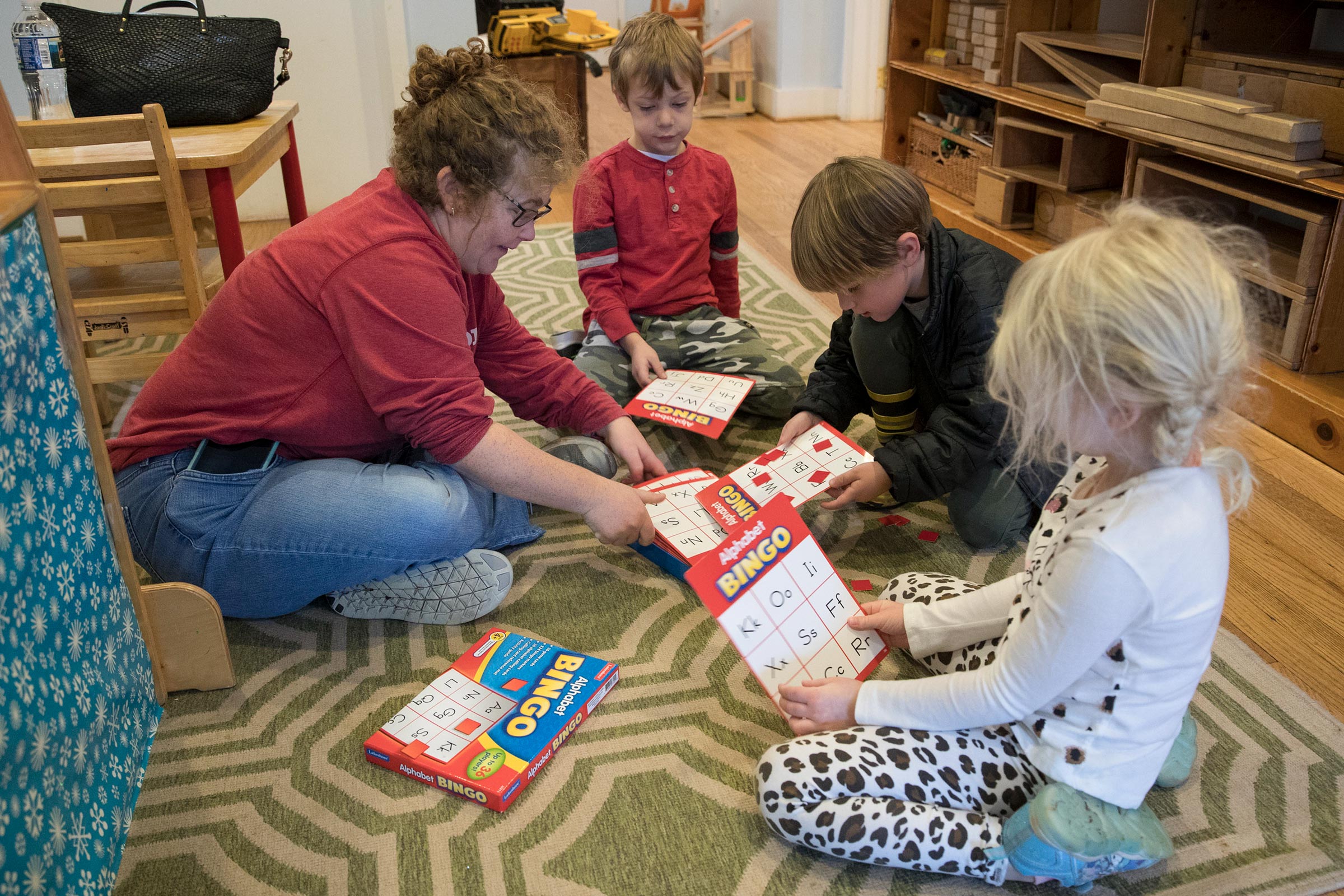 Kahn has been working with preschool children at the Charlottesville Day School for the last 11 years. (Photo by Dan Addison, University Communications)

UVA alumni Dave and Stacy Bruns, the founders of the Charlottesville Day School – where Kahn has worked for the past 11 years – say Kahn is a one of a kind.

“More people know Meryl than any other teacher at this school,” Dave Bruns said. “They walk in and say, ‘Oh, I’ve seen her at a UVA basketball or lacrosse game.’”

“CDS and UVA have become her families,” Stacy Bruns said.

“She knows everything – like whose mom had a baby, what kid didn’t sleep well the night before,” Bruns said. “If a door was left unlocked, she tells us.”

Megan Van Ornum, who teaches the “Grizzly Bears” – a 4- and 5-year old pre-kindergarten class that Kahn assists with – said that whether it’s helping with an art project or playing a board game, Kahn’s love for kids is what really stands out.

“She always greets them with a big smile or hug or ‘Welcome back!’ She just loves being with the kids,” Van Ornum said. “And she does a lot of the behind-the-scenes stuff that doesn’t always get appreciated that helps our classroom run smoothly.” 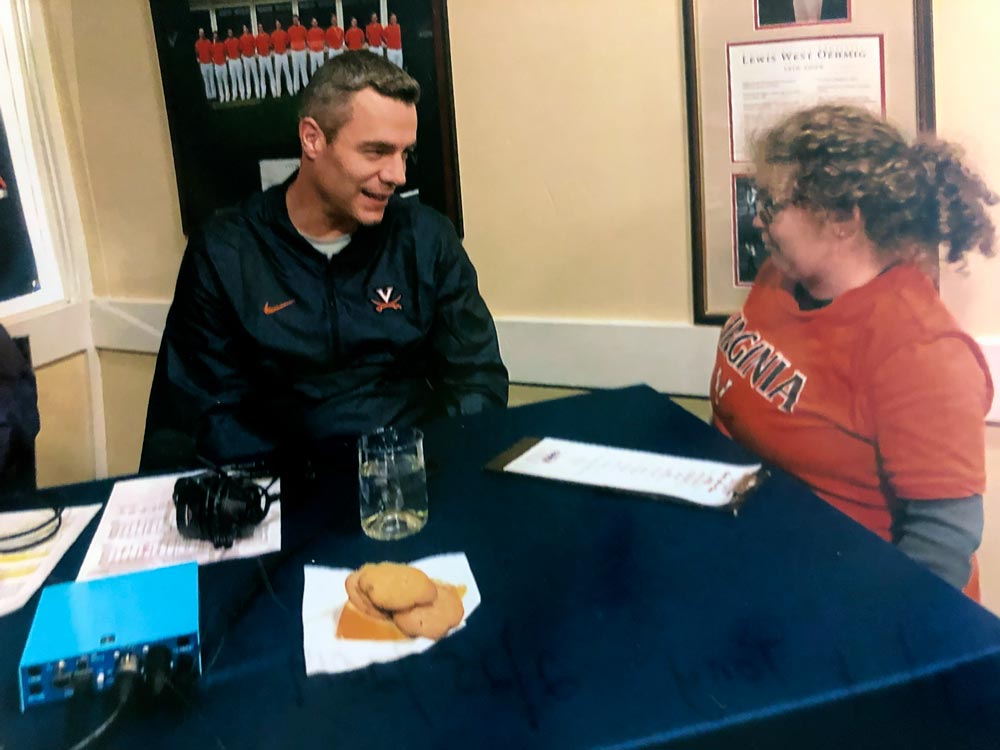 It was prior to the start of a Mendenhall radio show in December, when Koehn – just before the show started – told Kahn he had something for her. He reached into his bag and pulled out a few strands of confetti that he had saved from the basketball team’s win over Texas Tech in the championship game last spring.

Koehn had been meaning to give it to Kahn, who was unable to make the trip to Minnesota. The look on Kahn’s face as she accepted the gift was as if she had just been handed a block of gold.

Koehn chuckled when reminded of the story.

“The thing that always makes me laugh is that it doesn’t matter how a game went,” he said. “We could have totally stunk it up at some arena, but every time her greeting is the same. She’ll walk up to Tony or Bronco and say, ‘Coach, great, great game!’ You know, the coaches are as hard on themselves as anybody; they’ve broken down the film and it hasn’t been real pretty.

“But you can’t help but have your heart melt a little bit. Her support is just so unconditional. It’s really cool.”

Kahn, who walks to many of UVA’s games, smiled when asked what it’s like getting stopped by Bennett and Mendenhall on the street.

“They just wave and say, ‘Hi Meryl!’ I’ll be walking fast somewhere, and all of a sudden they’ll honk the horn. Sometimes it startles me.”

Ryan isn’t surprised so many people want to say hello.

“I would say people love her because she is extremely genuine,” she said. “You know her likes, you know her dislikes. She is just so real and loving and kind. 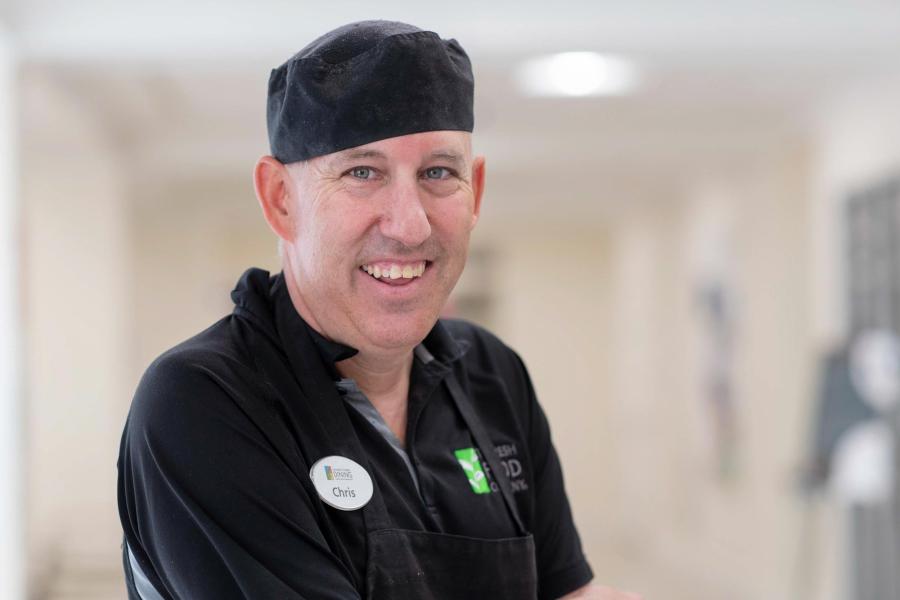 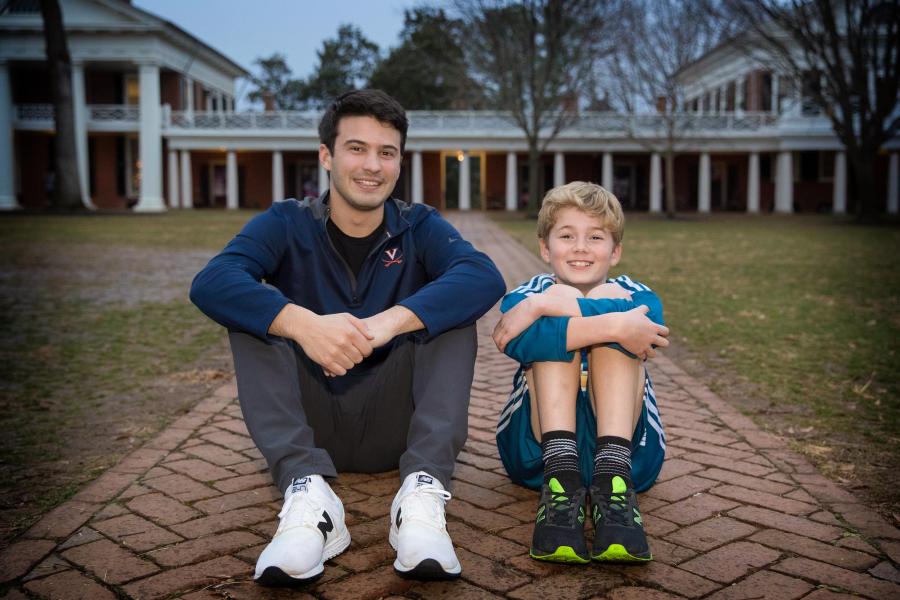 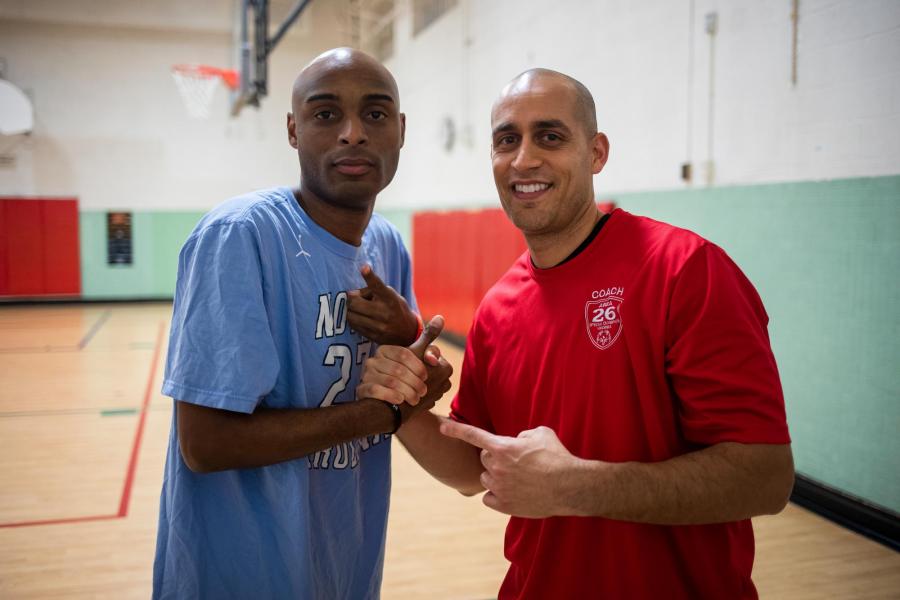