You would never guess it by his even-tempered demeanor, but Haydn Wadley likes going to extremes.

“Things get pretty interesting when you take materials to their point of failure,” said Wadley, a University Professor and Edgar Starke Professor of Materials Science and Engineering at the University of Virginia. “Their sometimes spectacular failures inspire you to investigate the fundamental processes that are responsible, and that knowledge then sets the stage for designing new materials and new structures that can survive under even more extreme conditions.”

One extreme environment that has drawn Wadley’s attention is the interior of jet engines.

In 2016, the International Air Transport Association expects airlines to carry 3.6 billion passengers, the equivalent of half the world’s population. Jet engine performance affects all of those people, and increasing the performance protects the environment by reducing carbon dioxide and nitrogen oxide emissions.

Surfaces in a jet engine’s combustion chamber and in the turbine immediately behind it routinely reach 2,500 degrees Fahrenheit. At these temperatures, even the most advanced engine alloys rapidly oxidize and fail. 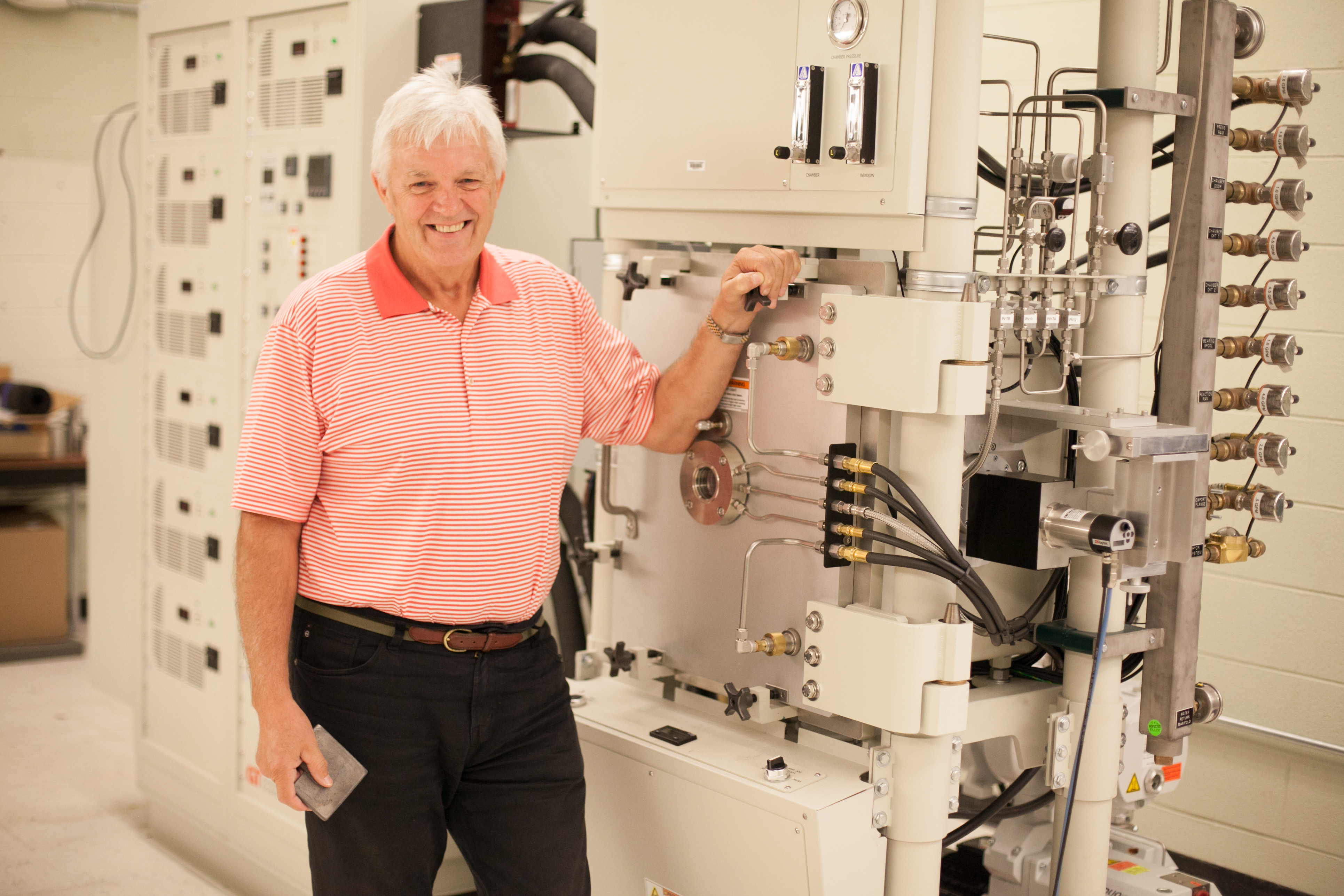 In response, engine manufacturers coat these parts with heat-resistant materials. Over the years, Wadley’s research group has done pioneering work exploring the mechanisms that enable coatings to protect an underlying surface, determining mechanisms that cause the coatings to fail with rising temperatures, and developing longer-lasting coating materials. Wadley and his colleagues also have developed vapor deposition processes that deliver more effective coating protection.

But 2,500 degrees is not as extreme as engine manufacturers would like to go. Combustion at even higher temperatures would increase fuel efficiency and further reduce carbon dioxide emissions. They are experimenting with engine components made from ceramic composites that have tremendous strength at ultra-high temperatures. Principal among these are SiC/SiC ceramic matrix composites, named because silicon carbide is used for both matrix and fiber.

The problem with SiC/SiC composites is not oxidation per se, which usually proceeds quite slowly since its oxide (silica) forms a protective coating. Rather it is exposure to water vapor at high pressures, which effectively etches away the silica from the composite surface and greatly accelerates oxidation. Wadley’s lab is designing, making and testing various coatings that can protect SiC composites exposed to temperatures of 3,200 degrees Fahrenheit.

The work began in 2000. In October of that year, as the USS Cole refueled in a Yemeni harbor, terrorists steered a boat laden with explosives near the guided missile destroyer and detonated it, killing 17 sailors and heavily damaging the ship. In a matter of weeks, the Navy invited Wadley to join an elite team of researchers trying to determine how best to harden the hulls of its vessels against underwater shock waves.

Wadley began by trying to understand more about how waterborne shockwaves created by an explosion interact with structures. “We realized that if the structure is able to move away from the shock, we could reduce the momentum that is transferred to it by up to a factor of two,” Wadley said. “The problem was that if you make compliant structures like this, they would tear and break apart easily.”

His solution was to create a sandwich in which the “meat” was spring-like cellular structures attached to the metallic outer hull that could be affixed to the inner hull. Wadley’s team discovered that trusses used in geodesic domes made excellent springs. They went on to develop techniques to make these structures and, in collaborations with the Navy and colleagues at Harvard, the University of California at Santa Barbara and Cambridge University, performed underwater blast tests to characterize their performance experimentally, improve their computational design codes and refine their prototypes. Wadley later adapted this work to better protect vehicles from buried mine blasts.

Another area of research for Wadley involves ballistic impacts. A projectile’s impact can create the most extreme conditions a material can be exposed to. “If you want to stop a projectile from penetrating, you need materials that severely deform or break the projectile, slow down the fragments and finally stop them,” Wadley said.

His research group has been exploring two-layer structures. The outer layer is a ceramic-metal composite composed of an extremely hard, dense ceramic – silicon or titanium carbide – and an aluminum or nickel metal binder. The goal is to design materials which, in breaking the projectile, are themselves only moderately damaged. To decelerate the fragments, he is investigating polymer composites made with ultra-high-molecular-weight polyethylene fibers, a lightweight plastic that is 15 times stronger than steel, yet so light it floats on water. “Having studied the fundamental mechanisms by which the polymer stops a projectile, we’ve realized that they haven’t reached their theoretical limits of performance,” Wadley said. “This means that over time we can make progressively lighter ballistic-resistant materials. Even today, they are much superior to Kevlar.”

Wadley’s work continues to earn acclaim. He received word Monday that a paper he co-wrote with members of his research group for the Journal of Materials Science has been awarded the 2015 Robert W. Cahn Prize for the most exceptional paper published in the prestigious journal during the past year.

“If we want technology to continue to provide greater services for society, we need to understand failure in extreme environments and so design materials and structures that withstand them,” Wadley said.