Gerald L. Baliles to Step Down as Director of the Miller Center of Public Affairs 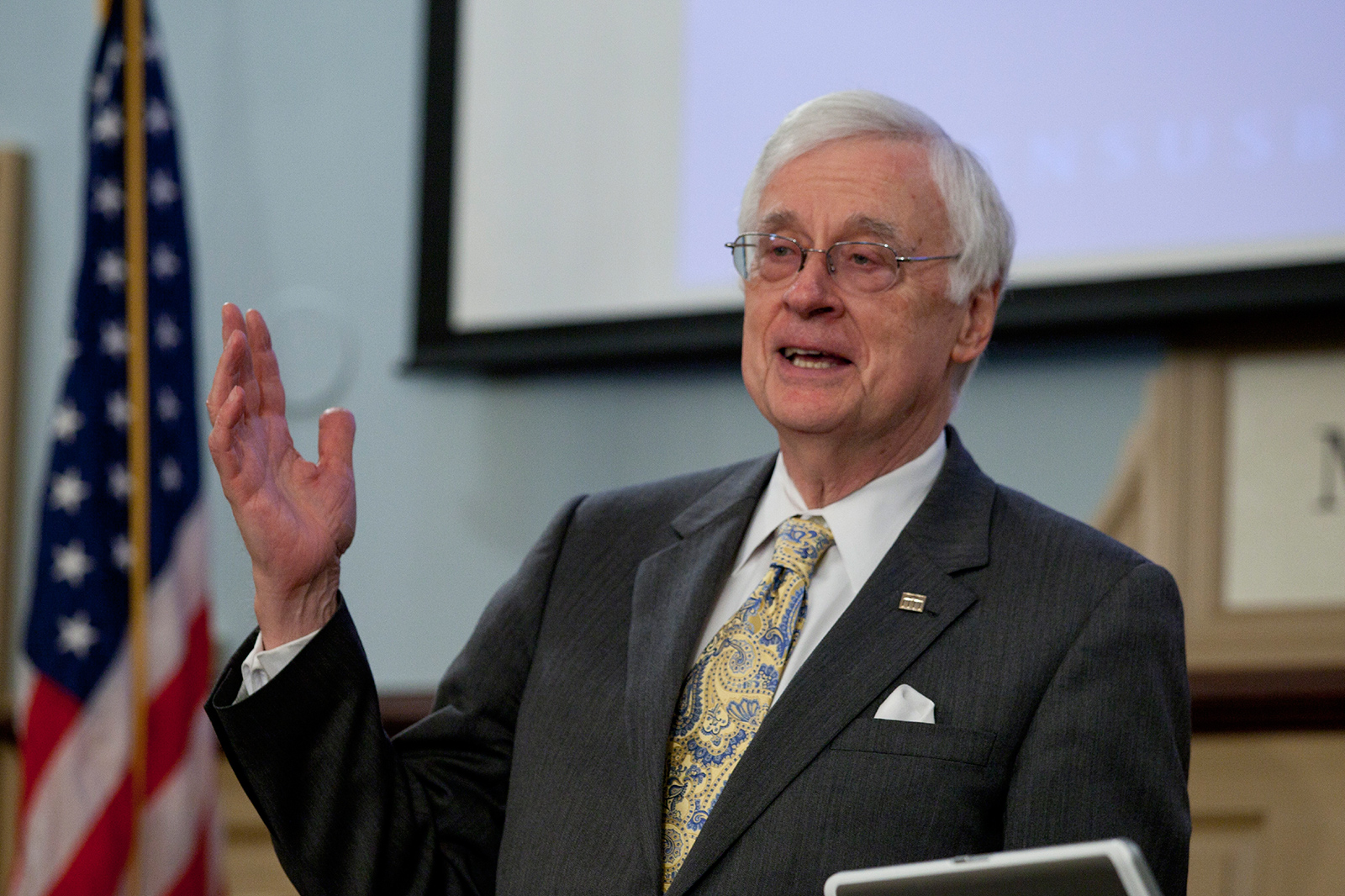 Former Virginia Gov. Gerald L. Baliles announced today that he will step down as director and CEO of the University of Virginia Miller Center of Public Affairs at the end of the calendar year.

“Under the leadership of Governor Baliles, the Miller Center has held true to its founding intent to address major issues and to focus the attention of the academy, the public and policymakers,” President Teresa A. Sullivan said. “His tenure at the center included several noteworthy accomplishments, including the launch of the National Discussion and Debate Series and the assembling of the National War Powers Commission. He increased the visibility and influence of the Miller Center and the University of Virginia. I wish him and his wife, Robin, all the best as they embark on their next journey in life,” Sullivan added.

Sullivan said a national search for a new center director will begin immediately.

Regarding his decision to step down, Baliles said, “For an institution with a close eye on the U.S. presidency, eight years make for an especially fitting tenure, and the Miller Center now has such strong momentum. Something that has held great appeal for the years ahead is that chance, after some personal time off, to reflect and perhaps write about the many steps and facets of my work in public office, private practice and academia through the decades.”

Baliles is the fourth director to head the Miller Center.

Former Virginia Gov. Linwood Holton assisted in the formation of the Miller Center in 1975 and has served as a lifetime member of the Miller Center Governing Council. “Governor Baliles arrived at just the right time and was able to build upon the strong legacy of former center director Kenneth Thompson to further develop a nationally recognized center committed to the study of the U.S. presidency,” Holton said.  “Governor Baliles’ contributions to this important effort were truly phenomenal,” Holton added.

During Baliles’ tenure, the Miller Center’s scholarship, policy reports and broadcasts have regularly garnered national media attention, and its website has received more than 60 million page views. In recent years, books by the center’s scholars have been published by leading university presses such as Cambridge, Oxford, Harvard, Cornell and Chicago. The Miller Center’s National Fellowship Program also mentors rising scholars of the highest caliber.

The Miller Center has become the nation’s leading institution for presidential studies, especially fitting given the University of Virginia’s long connection with the U.S. presidency beginning with Jefferson himself. The center is home to two longstanding programs dedicated to preserving and illuminating presidential history. Scholars in the Presidential Recordings Program transcribe, annotate, interpret and make available to the public more than 5,000 hours of secret White House recordings of Presidents Franklin Roosevelt through Richard Nixon. The Presidential Oral History Program chronicles the presidencies of Jimmy Carter, Ronald Reagan, George H.W. Bush, Bill Clinton and George W. Bush through confidential transcribed interviews with key figures from each administration. The Oral History Project on President George W. Bush was secured through negotiations during Baliles’ tenure at the Miller Center.

The National War Powers Commission, conducted in partnership with Rice University, Stanford University and the College of William & Mary, was among Baliles’ first initiatives at the Miller Center, continuing a tradition of bipartisan blue-ribbon commissions at the center. Former Secretaries of State James A. Baker III and Warren Christopher co-chaired the commission, which issued a unanimous report to the President and Congress calling for the repeal and replacement of the War Powers Resolution of 1973 with the proposed War Powers Consultation Act. Earlier this year, Senators Tim Kaine and John McCain submitted war powers legislation modeled on the commission’s recommendations.

In the opening years of his tenure, Baliles likewise inaugurated the Miller Center’s National Discussion and Debate Series, in partnership with MacNeil/Lehrer Productions for PBS distribution and then with ABC News for broadcast with This Week. The series has featured leading public figures and scholars engaging in civil and substantive exchange on the great issues facing America. It complements the center’s longstanding Forum program for eminent speakers on matters of governance and history, now broadcast as the American Forum throughout the country on PBS member stations.

In 2010, the Campaign for the Miller Center attained and surpassed its $39.5 million goal with a total of more than $43 million, the largest fundraising campaign in the institution’s history. Today, the Miller Center’s total endowment stands at approximately $70 million, up from some $52 million in 2005.

Baliles’ tenure at the Miller Center has also been notable for the caliber of the faculty and staff involved in the center’s work. Douglas Blackmon, Pulitzer Prize-winner and former senior national correspondent of the Wall Street Journal, was recruited to the center, as were acclaimed Kennedy family scholar Barbara Perry and the former head of the State Council of Higher Education for Virginia, Michael Mullen. Distinguished historians and political scientists at the University of Virginia hold the center’s endowed academic chairs, in joint appointments. Former U.S. Ambassador to China, Joseph Prueher, and former U.S. Ambassador to Iraq, Afghanistan and Syria, Ryan Crocker, have held the center’s Schlesinger Chair. Timothy Naftali became the director of the Nixon Presidential Library and Museum from his post at the Miller Center, and Maurice Jones became the city manager of Charlottesville following his time at the center under Baliles. Last year, Baliles’ longtime colleague W. Taylor Reveley IV was recruited from his position as managing director of the Miller Center to become president of Longwood University.

Baliles served as the 65th Governor of the commonwealth of Virginia. His tenure as governor capped a career in public service that included serving as Virginia’s Attorney General (1982-85) and a member of the Virginia House of Delegates (1976-82). After leaving public office, he entered private law practice as a partner in the firm of Hunton & Williams, LLP, headquartered in Richmond, Va. Baliles holds a bachelor’s degree from Wesleyan University and a law degree from the University of Virginia Law School.

The Miller Center is a nonpartisan affiliate of the University of Virginia that specializes in presidential scholarship, public policy and political history, and strives to apply the lessons of history to the nation’s most pressing contemporary governance challenges. Based at U.Va., with offices in Charlottesville and in Washington, D.C., the Miller Center is committed to work grounded in rigorous scholarship and advanced through civil discourse.

The Miller Center was founded in 1975 through the philanthropy of Burkett Miller, a 1914 graduate of the University of Virginia School of Law and prominent Tennessean. Troubled by the partisan rancor he saw developing throughout the nation, Miller envisioned a place where leaders, scholars and the public could come together for discussion grounded in history, to find consensus solutions. He founded the Miller Center in memory of his father, White Burkett Miller. Through Mr. Miller’s lead gift, as well as through past and present gifts by the center’s thousands of supporters, the Miller Center’s combined endowment now stands at more than $50 million. The center, under the oversight of its Governing Council, is an integral part of the University of Virginia, with maximum autonomy within the University system. Its programs are supported fully by funds it solicits – through the Miller Center Foundation – and its endowment.

About the University of Virginia

The University of Virginia is distinctive among institutions of higher education. Founded by Thomas Jefferson in 1819, the University sustains the ideal of developing, through education, leaders who are well-prepared to help shape the future of the nation. A recognized leader in teaching, research, health care and service, the University of Virginia is made up of 11 schools in Charlottesville, plus the College at Wise in Southwest Virginia. U.Va. offers 51 bachelor’s degrees in 47 fields, 81 master’s degrees in 65 fields, six educational specialist degrees, two first-professional degrees (law and medicine) and 57 doctoral degrees in 55 fields. The University of Virginia Health System is a nationally renowned academic medical center committed to providing outstanding patient care, educating tomorrow’s health care leaders, and discovering new and better ways to treat diseases.

Fall Is in the Air on Grounds END_OF_DOCUMENT_TOKEN_TO_BE_REPLACED