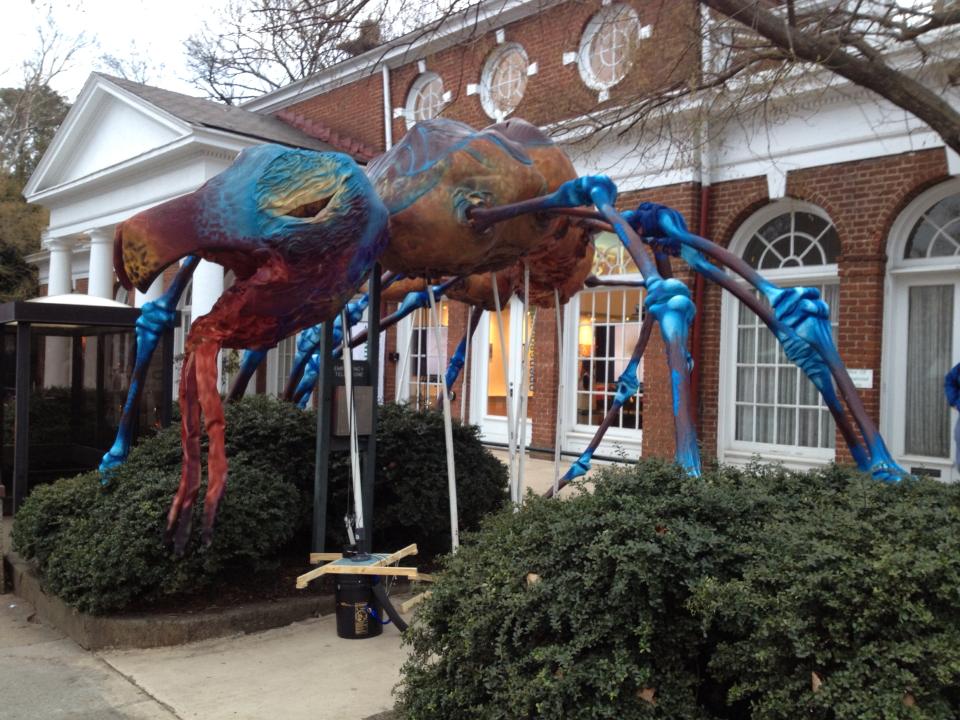 A one-eyed “quadrapus” with 12-foot tentacles, a giant centipede named Winston, a “Treeture” that likes to eat people and more!

Unlocked and freed from the minds of University of Virginia studio art, drama and architecture students, these giant creatures will take over Grounds on Saturday as part of the Stan Winston Arts Festival of the Moving Creature. The parade at 2 p.m. and arts festival, to follow in Nameless Field at 3 p.m., is the culmination of a yearlong artistic project.

The event celebrates a new interdisciplinary course – funded by an Arts in Action grant and cross-listed in the School of Architecture and the College of Arts & Sciences’ drama and studio art departments – that has engaged a variety of students throughout the year in a collaborative workshop to research, design and construct large-scale kinetic monsters.

The classes and workshops have been led by Melissa Goldman, the Architecture School’s fabrication facilities manager; Steven Warner, technical director of the Department of Drama; and Eric Schmidt, the studio and gallery technician of the McIntire Department of Art.

The workshops and project to research, design and construct the moving creatures for Saturday’s festival received funding from the U.Va.Alumni Association’s Jefferson Trust. A public presentation of the eighth annual Jefferson Trust grants will be held Friday at 4 p.m. on the south steps of the Rotunda. As a thank-you, one of the giant moving creatures will accept the plaque for the grant.

The whole enterprise was inspired by the late Stan Winston, a Hollywood make-up and special effects master who graduated from U.Va. in 1968. As a student, he honed his craft while studying drama and sculpture and working as a make-up artist for U.Va. drama productions.

After graduating, Winston moved to California and established the Stan Winston Studio, one of Hollywood’s premiere special effects studios. There, he helped to create some of modern cinema’s most memorable characters and creatures, including dinosaurs in “Jurassic Park,” the robots in “The Terminator,” avatars in “Avatar,” Edward Scissorhands and Iron Man.

The Arts Grounds departments wanted to foster the same mode of imaginative, cross-disciplinary thinking found in Winston’s work. With Winston as inspiration, students designed their own original creatures and will present them in a performance that not only showcases the students’ work, but also honors Winston’s memory.

The parade of creatures will begin at 2 p.m. on U.Va. Betsy and John Casteen Arts Grounds near the new Ruth Caplin Theatre, and will proceed up Culbreth Road, down Rugby Road, up the steps of the Rotunda and over to Alderman Library before finally arriving at Nameless Field by 3 p.m. The creatures will gather and be introduced to the crowd by special guest and Hollywood actor Matt Winston, Stan Winston’s son, who consulted with students and faculty throughout the year.

Following the creature introductions, festival attendees can then roam around Nameless Field, where they can visit various arts tents and get up-close and personal with the creatures and their makers.

The family-friendly event will host numerous other entertainers, including Charlottesville music group Downbeat Project, the Chinese Lion Dance group, Virginia Acrobatics and a U.Va. hip-hop dance group. The AirRaid Jugglers will wander the area, and balloon artist Jason LeBlanc will make balloon animals for all. Food trucks will be present at the event, and free water will be provided.

“This event is what the students have been working toward for the past year,” Matt Winston said. “I am so proud of all the hard work that they have put into this project.

The festival is the culmination of two classes: “The Art of the Moving Creature I,” which focused on the research, design and engineering of the creatures through material studies, fabrication tests and full-scale prototypes; and “Creature II,” which refined the designs and realized the final creatures as full-blown creative works of art.

As food for thought, students read classics such as Lewis Carroll’s “Alice in Wonderland” and Maurice Sendak’s “Where the Wild Things Are,” and watched films about Dutch artist Theo Jansen’s “strandbeests,” kinetic sculptures made from plastic tubes and bottles.

The students worked in collaboration with visiting artists from the Stan Winston School of Character Arts in Los Angeles, an educational media company devoted to preserving, promoting and teaching the art of character creation in all its forms – from practical to digital.

The school’s faculty are some of Hollywood’s top special effects and character creation artists who share their wisdom via the school’s online streaming video library, providing a virtual window into their world and the processes they use to create cinema’s most memorable characters – from aliens to predators, terminators to T. rexes.

The third workshop led to the birth of a huge, inflated “quadrapus” named Nessy, with a dome-like structure similar to an octopus for a body, four 12-foot long tentacles and one protruding eye.

Nessy is hollow inside and manned by five puppeteers. Four students manually control her tentacles, and one student walks in the middle of her structure to control the eye. Nessy’s eye has a camera inside that attaches to a video screen inside her body. Viewers can go inside of her and operate the eye, seeing only what Nessy sees.

After Nessy’s creation, the class took the giant creature on a walk with Winston to the Rotunda and Alderman Library. A crowd gathered as Winston and Nessy battled it out in the courtyard in front of the library.

Since the final workshop, students have been left to their own imaginations and with new skills to build the final three creatures to be presented at the festival. Silvanus is a vicious-looking but kindly dog-like creature, and Treeture is a collection of creatures named for their resemblance to trees. Treeture likes to eat people and moves stealthily in unexpected ways.

The fifth and final creature will be unveiled Saturday.

Q&A: Assessing the Risks and Rewards of Pelosi’s Plan to Visit Taiwan END_OF_DOCUMENT_TOKEN_TO_BE_REPLACED

These Giant Wind Turbines, Inspired by Palm Trees, May Be the Future of Renewable Energy END_OF_DOCUMENT_TOKEN_TO_BE_REPLACED