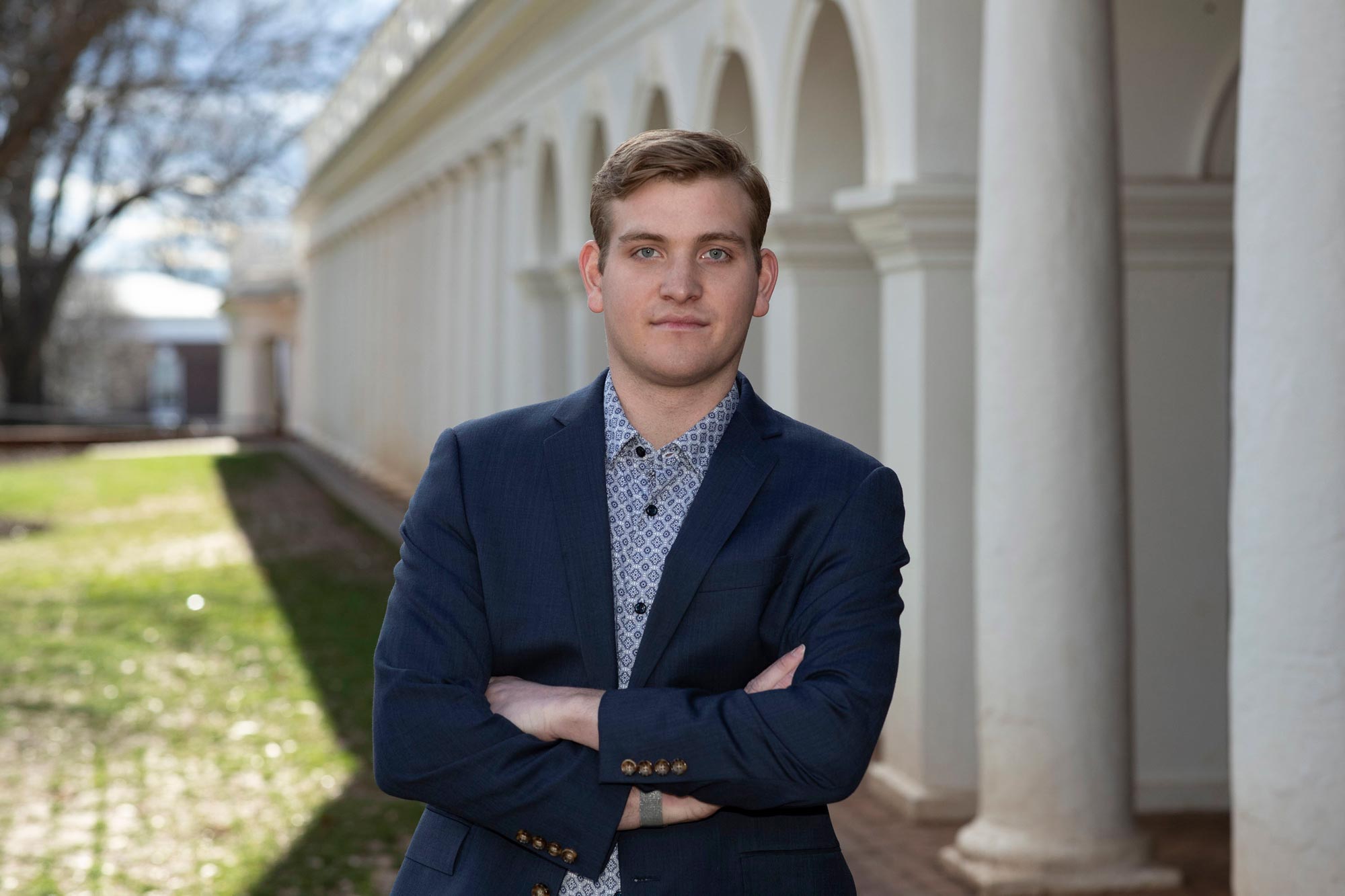 Goerl, a human biology major at the University of Virginia, earned a Harrison Undergraduate Research Award in 2019. Created through a gift from the late David A. Harrison III and his family, the Harrison Undergraduate Research Awards fund outstanding undergraduate research projects. Selected by a faculty review committee, awardees receive as much as $4,000 apiece to pursue their research interests, under the direction of a faculty mentor.

Goerl is using his award to experiment with non-psychoactive compounds from cannabis sativa to quell seizures in animal models of epilepsy. He is collaborating with plant biologist Michael Timko, Lewis and Clark Professor of Biology and professor of public health sciences, and epilepsy researcher Mark Beenhakker, an associate professor of pharmacology.

“Epilepsy is a very common brain disorder that affects 3 million people in the United States, and about one-third of them can’t control their seizures, despite having 20-plus medications on the market,” Goerl said. “The opportunities for cannabis-based therapeutics are endless because legal regulations have long prevented researchers from accessing it. In the literature, cannabis is affectionately called ‘a pharmacological treasure chest.’ There are about 100 compounds in the plant; no one really knows how they work, but we know they do something. That’s why I like to call cannabis research ‘the Wild West of neuroscience.’”

Goerl was initially intrigued by studies and stories of treating children and adults who have seizures with the full-spectrum extract, one that contains all of the compounds, which seemed more effective than just CBD alone. This inspired him to research lesser-known compounds in cannabis.

“We are trying to characterize a compound in cannabis, cannabidiol acid or CBDA, the acidic precursor to CBD,” Goerl said. “CBDA is just one of a hundred different compounds in cannabis that we don’t know a lot about. There are very few studies on it; CBD and THC take up all of the popularity because they are the two main compounds in cannabis.

“CBDA has anti-seizure effects in the animal model of epilepsy we tested at non-toxic doses, which is the most important part,” Goerl said. “We were able to successfully run it through the most popular and robust model of epilepsy, called the maximal electro-shock seizure test. … At higher doses, CBDA prevented seizures in all of the animals we tested, so that gives us an indication that it might be an anticonvulsant in its own right.”

“Brett is extremely bright, dedicated and ambitious – and his work examining whether there is value to CBD as a treatment of epilepsy is very timely and relevant to understanding medical claims of hemp extracts.”

Timko is working on a project to grow industrial hemp suitable for Virginia’s unique agricultural landscape in an effort to help replace Virginia’s struggling tobacco industry.

“By serving as an energetic conduit between Dr. Timko and myself, Brett aims to identify the specific compounds within medicinal marijuana plants, cannabinoids, that exhibit anticonvulsant properties,” Beenhakker said. “As anecdotal evidence suggests that they can significantly attenuate the occurrence of severe seizures, cannabinoids have received considerable attention in the epilepsy research community. Brett aims to rigorously parse out specific cannabinoids that have the capacity to augment the medicinal properties, if any, of cannabidiol.”

When Goerl came to him with the research proposal, Beenhakker said he was swamped with work and that Goerl would have to be the driving force behind it. So far, he has been just that.

“Brett’s intelligence and genuine interest in making his project work has truly been a refreshing experience for me.” Beenhakker said.

Goerl’s co-leader on the project, Sarah Watkins, graduated in 2019 with a degree in economics and a minor in health and wellbeing while taking pre-med courses. She has worked with Goerl for several years and continues to work with him in the Beenhakker lab while she prepares for her Medical College Admissions Test.

She said she and Goerl have complementary skills, striking a good balance and learning from each other. “Brett is a dedicated lab partner and I feel very lucky to be working with him,” Watkins said. “We do a good job of holding each other accountable. We’ve both put in hundreds of hours into this research and consider ourselves equal partners in this project.

“Brett is also a very creative problem-solver. When things go wrong, which they often do, he does not get flustered, but works with me to figure out ‘OK, this went wrong, it is what it is, so what is our next step?’ rather than getting flustered or wanting to give up. I think he is unique in that he thinks outside the box and creates a lot of opportunities for himself in this way. I am very excited to see where life takes him.”

Goerl said he has no idea when and if these compounds may enter clinical trials in humans, but he said that the research will continue. While he is graduating in May, he has mentored two younger researchers who will carry on his research.

“At the end of the day, there are plenty of these drugs that pass these tests, and then you give them to humans and they don’t work,” Goerl said. “This is the case for every experiment you are going to do on a rodent, because rodent brains are different from human brains. The idea is that if you run this compound through a variety of tests, each one will reveal a little facet of how it interacts with the disease you are studying. Once a compound has enough models under its belt, you have a pretty good idea that ‘this is probably going to work.’ Then, we can bring this compound to human trials.”

Timko, who is overseeing Goerl’s distinguished major thesis, described the student as “a pleasure to work with in the classroom and lab.”

“Brett has been the catalyst for this project from day one and has been working diligently to be able to test the effects of materials from my lab as well as from external suppliers to see which has the best efficacy.”

Timko said he has spent hours with Goerl discussing the project as well as considering the best ways to approach the analysis.

“He is extremely bright, dedicated and ambitious – and his work examining whether there is value to CBD as a treatment of epilepsy is very timely and relevant to understanding medical claims of hemp extracts,” Timko said “We know that it works, but there might also be other minor cannabinoids that function in this capacity as well, either alone or in entourage with CBD.”

An Echols Scholar and a College Science Scholar, Goerl has received multiple Dean’s Scholarships for “Outstanding Commitment to Service in the Community”; a College Council Minerva Summer Research Grant; and a College Council Semester Scholars Award. A Lawn resident, he is a member of the Raven Society; co-president of Autism Allies and co-founder of its Mentorship Program; co-chair of the College Science Scholars; and department representative for the Human Biology Distinguished Majors program.

“Through this experience, one of the main things that I have learned about myself is that I don’t see myself just working in a lab,” Goerl said. “I see myself taking an interdisciplinary approach to science and translating it into practical applications that save patients’ lives.”

In Memoriam: Life of Drama Professor To Be Honored Sunday END_OF_DOCUMENT_TOKEN_TO_BE_REPLACED