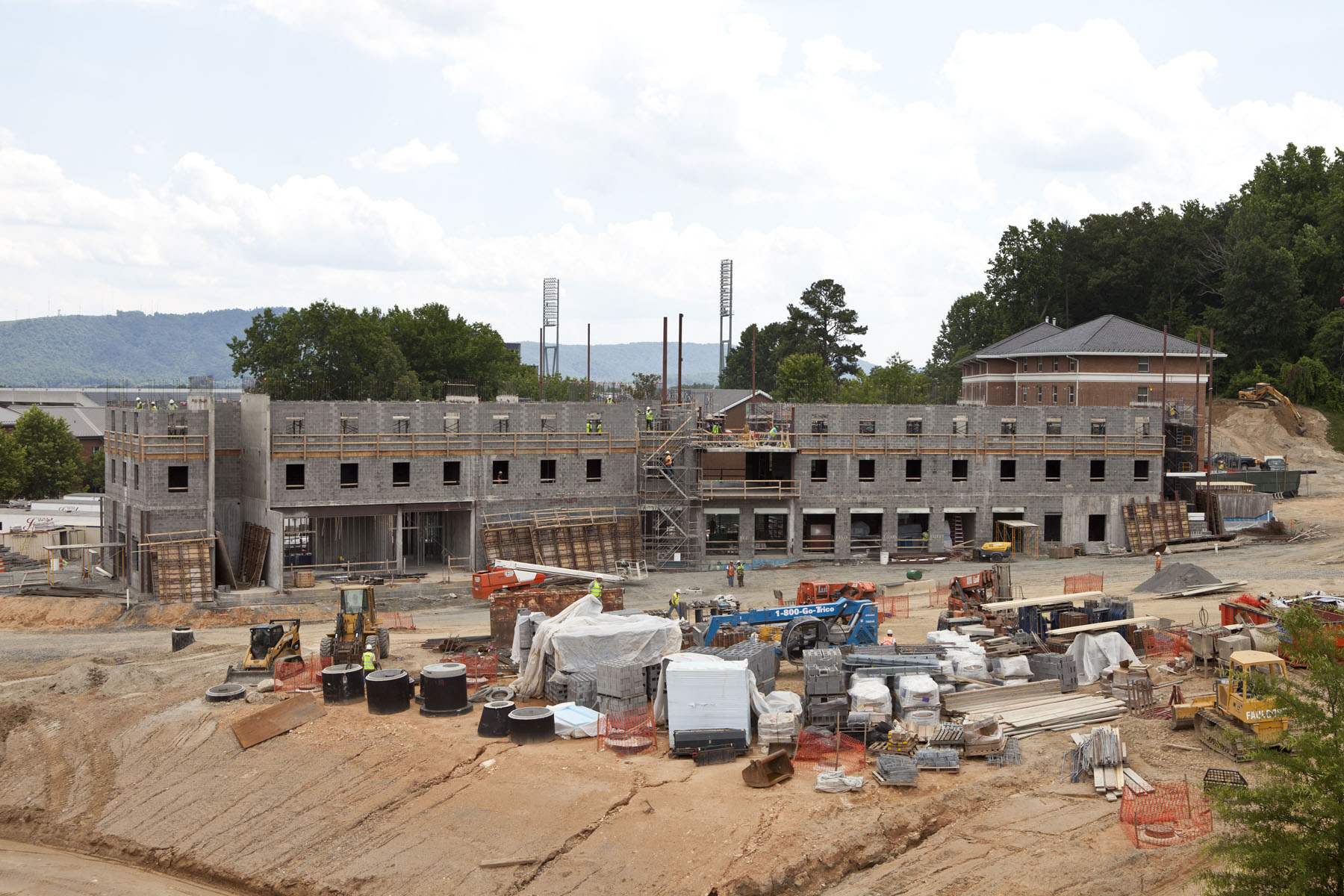 Even with most students gone, there will be plenty of activity along the University of Virginia’s Alderman Road this summer as crews finish construction of three new residence halls, begin demolishing an old one and install irrigation and drainage systems under the grass near the Observatory Hill Dining Hall.

Construction is wrapping up this summer on Tuttle-Dunnington and Lile-Maupin houses, two five-story residence halls each housing 176 first-year students and nine resident staff; and Shannon House, a five-story dormitory housing 192 first-year students and nine residence staff. The former two buildings were named after previously razed dorms (which, in turn, were named for early University professors); Shannon House is named in honor of the late Edgar F. Shannon Jr., president of the University from 1959 to 1974.

Students will move into these buildings at the start of the fall term in August. They replace Webb, Maupin, Lile and Tuttle houses, which were demolished in the summer of 2011.

Demolition will also begin this summer on Dunnington House, to be replaced with a five-story residence hall, which is planned to house 204 first-year students and nine resident staff. Currently named Building Six, it will also contain new offices for the Department of Housing and Residence Life.

Once Building Six is completed in the summer of 2015, Dunglison and Courtenay residence houses will be demolished, completing a roughly $112 million phased project that Housing and Residence Life embarked on in 2006. It included the removal and replacement of all the residence halls in the Alderman Road residence area that were built in the 1960s. Nearby Woody and Cauthen houses, opened in 2000 and 1996, respectively, will remain.

Kellogg House, the first of the new residence halls, was completed in August 2008 and named after Robert Kellogg, a former dean of the College of Arts & Sciences, English professor, renowned scholar of Icelandic studies and a driving force behind Brown Residential College, who died in 2004. The building included both wired and wireless Internet connections and contained more classroom, quiet study and social space than previous residence houses. It also featured room-by-room temperature controls and a then-novel system that allowed students to monitor the status of machines in the laundry room from their computers.

It ushered in a new era of U.Va. residence halls; the new buildings, while following their own floor plans and design, have been modeled after Kellogg House.

In the first four phases of the project, the schematic designs were prepared by Ayers/Saint/Gross Architects + Planners, with W.M. Jordan Company and Clark Nexsen Architecture & Engineering as the design/build team. In the final phase, the design will be done by EYP Architecture & Planning and Donley’s Inc. will manage the construction.

Construction in that area of Grounds does not stop with the buildings. Crews will also install irrigation and drainage to the grassy area outside the Observatory Hill Dining Hall.

“The O-Hill Dining lawn has a large underground stormwater storage system,” said Kate Meyer, project manager for Facilities Management’s department of Planning & Construction. “This project will tap that water to irrigate a new lawn that will be a focus of recreation and student events in front of O-Hill Dining. Domestic water will be tied to the system for backup.”

The irrigation pumps, storage tank and equipment will be hidden inside underground vaults. Fresh sod will be put down in mid-August, and the $175,000 project is scheduled to be complete by the end of September.

Perimeter fencing and erosion and sediment control measures will be installed around the O-Hill Dining Hall lawn this week. The irrigation work should have no impact on sidewalks or roads in the area.

What’s the True Story of Brooks Hall? This Architectural Historian Has the Answer END_OF_DOCUMENT_TOKEN_TO_BE_REPLACED

At UVA, There Is a Club for Everyone END_OF_DOCUMENT_TOKEN_TO_BE_REPLACED