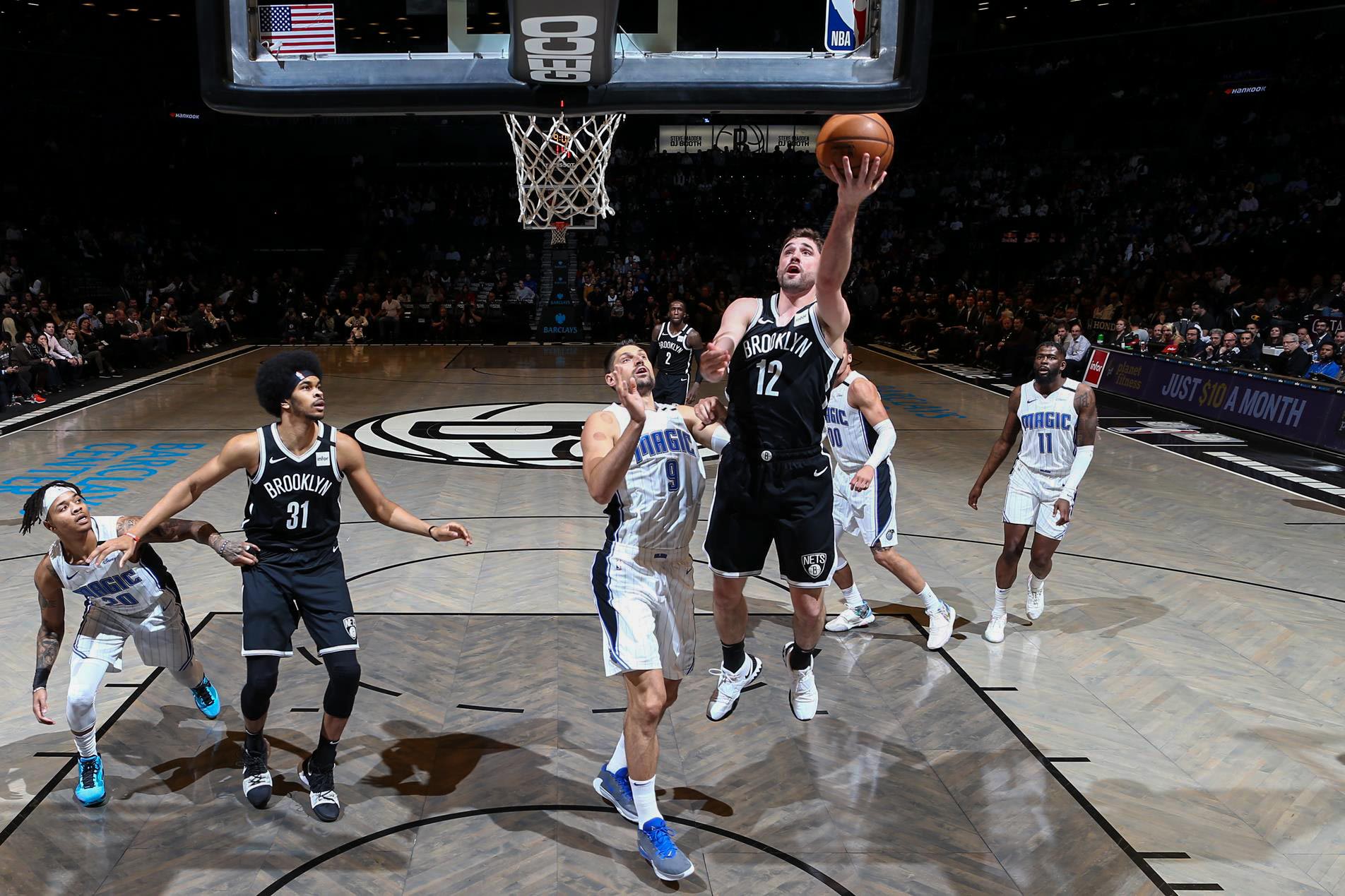 Now an established NBA veteran, UVA alumnus Joe Harris will become an unrestricted free agent after the current season concludes – whenever that is. (Photo courtesy the Brooklyn Nets)

With the National Basketball Association season suspended, Joe Harris has considerably more free time than usual this spring. The Brooklyn Nets’ sharpshooter is using it constructively.

A 2014 graduate of the University of Virginia, where he helped head coach Tony Bennett build one of the nation’s premier programs, Harris is taking an online course offered through Yale University. Titled “The Science of Well-Being,” it’s taught by Laurie Santos, a psychologist who’s also a professor at Yale.

The six-year NBA veteran would rather be playing hoops than studying. But concerns about COVID-19 effectively shut down all sports in the United States last month, and when the games will resume remains unclear. And so Harris, like the rest of the country, has been adjusting to life in a pandemic.

“Everybody’s jobs have changed; everybody’s lifestyles have changed,” Harris said. “Once you develop sort of a routine and get comfortable within it, it definitely helps the days pass.”

Still, he acknowledged, the changes have been dramatic in many cases. 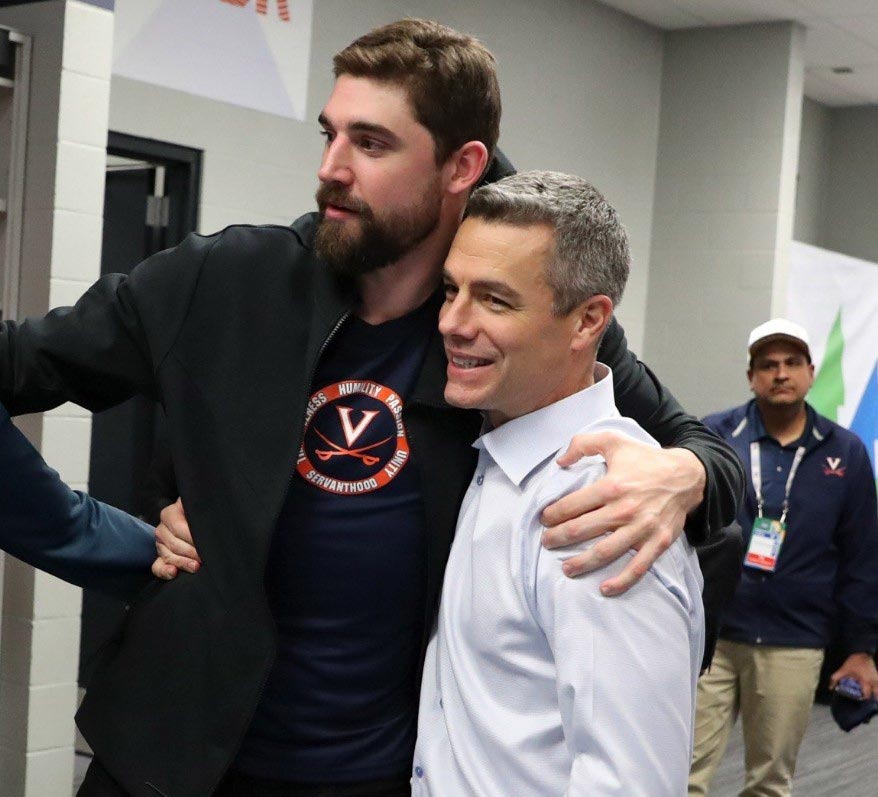 “There’s nothing going on in New York right now, which is crazy,” Harris said. “Everybody’s kind of gotten used to it, but it is so weird being able to get around anywhere driving. I go into our practice facility every day for rehab. It used to take me anywhere from 20, 30, sometimes 40 minutes, if traffic was bad or there was an accident or something like that. It takes me like 10 minutes now.”

Brooklyn’s final game last month was a road win over the Los Angeles Lakers. Harris, a 6-foot-6 swingman, scored 12 points in the Nets’ 104-102 victory, but severely sprained his left ankle at Staples Center that night.

“So I was going to be out a month, no matter what, and then [the NBA shutdown] went down literally the next day,” Harris said. “I wasn’t even with the team. I flew back to New York with one of our trainers, and we were supposed to play at Golden State [on March 12]. The rest of the team was in San Francisco, and they just had to pack up their stuff and leave from there.”

His ankle has healed, Harris said, but he still reports to the Nets’ practice facility to work on his mobility and stability.

“The only loophole that I have right now is that the NBA allowed guys that were in the midst of rehab go into the facility and work with the trainer, so I’ve been able to do that for the last few weeks,” Harris said. “But when I go in, I have to wear a mask and gloves the entire time, and only you and the trainer are allowed in there.”

The practice court is off-limits, and no basketballs are involved in these sessions.

What do Sundays look like at the Harris residence? Buckets by any means necessary.

“Everything’s shut down,” Harris said. “I just do rehab, and I do it with one trainer, and it’s just the two of us in the entire facility, so it’s a little strange, because when you go in there, it’s usually hustling and bustling, with a lot going on and good energy, and now there’s just two of you in there.”

When the team returned to New York from the West Coast last month, Harris said, each Brooklyn player was required to quarantine for two weeks.

“The Nets have been really good about everything, especially early on,” Harris said. “They brought equipment by our apartments, so we all have free weights and bikes, and even now they bring our meals by for us. So we’re pretty fortunate that way.”

Some of his teammates left the city, Harris said, “because the setup in New York is tough. It’s hard to have a lot of space here. You can’t really get outside a ton. So [the Nets] encouraged guys to leave and go to wherever they might have a home in the offseason.”

The NBA announced Monday that, starting May 8, players would be able to use their team’s practice facilities individually for voluntary workouts in which no head or assistant coaches can participate. For now, though, Harris is focused on his rehab.

One of Bennett’s first recruits at UVA, Harris grew up in Chelan, Washington, with a basketball in his hands. His father, also Joe Harris, coached at Chelan High School, home of the Mountain Goats.

For the younger Harris, 28, this marks the first time in more than two decades that he’s gone this long without shooting on a basket. He lives in an apartment building, so there’s no hoop in the driveway for him to play on, and playgrounds in New York City are closed because of the pandemic.

“I can’t remember the last time I went this long,” Harris said. “I started going into the gym with my dad when I was 6 or 7 years old.”

He’s played in 63 games for Brooklyn this season and is averaging 13.9 points, 4.3 rebounds and 2.1 assists. He’s hit 41.2 percent of his 3-point attempts, and that shooting touch figures to put Harris in demand when he becomes an unrestricted free agent this summer. In 2019, he won the 3-point contest during the NBA’s All-Star weekend, beating such marksmen as Stephen Curry, Buddy Hield, Devin Booker, Dirk Nowitzki and Kemba Walker.

“You build a reputation around the league where these guys that are making the decisions, whether it’s front office or coaches, they respect and enjoy having UVA guys on their team.”

Free agency is scheduled to begin June 30, “but, shoot, with everything that’s going on, nobody really knows now,” Harris said. “All the dates could get pushed back. So say we were to [resume] the season in late June, early July, everything – the draft, free agency, all that stuff – would just get moved to a later date, like August or September.”

He’s likely to have multiple options as a free agent, but Harris said he hasn’t “really thought about it a ton. It’s one of those things where I’ll just sort of cross that bridge when I get to it. Right now all the focus is on prioritizing your health and well-being. I’m really more worried about that versus anything basketball-related, to be honest. Not being around it takes your mind off of it a little bit, in a weird way.”

He lives within walking distance of Barclays Center, the Nets’ arena. That’s also the home of the New York Liberty, who on April 18 selected UVA’s Jocelyn Willoughby with the 10th pick in the WNBA draft.

“I definitely have to make sure that I introduce myself to her,” said Harris, who has never met Willoughby.

Like Willoughby, Harris had a sensational career at UVA. A four-year starter for Bennett, who came to Virginia from Washington State University in the spring of 2009, Harris ranked first in program history in games played (135), second in 3-point percentage (40.7%) and 3-pointers (263), and 11th in scoring (1,698 points) when he graduated.

As a senior, Harris helped the Cavaliers win the ACC Tournament for the first time since 1976, and he still follows the program passionately. He didn’t play with Mamadi Diakite or Braxton Key or Jay Huff or Kihei Clark, but he knows their games well.

“I’m not typically able to watch a lot of the [UVA] games, just because we’re playing a lot of the same nights,” Harris said, “but I watch all the highlights, I watch Coach Bennett’s pressers, I keep track of everything.”

Harris was in Minneapolis last April to see the Wahoos capture their first NCAA title. The Hoos struggled early in 2019-20, but they had won eight straight games, and 11 of 12, when the season was canceled last month. 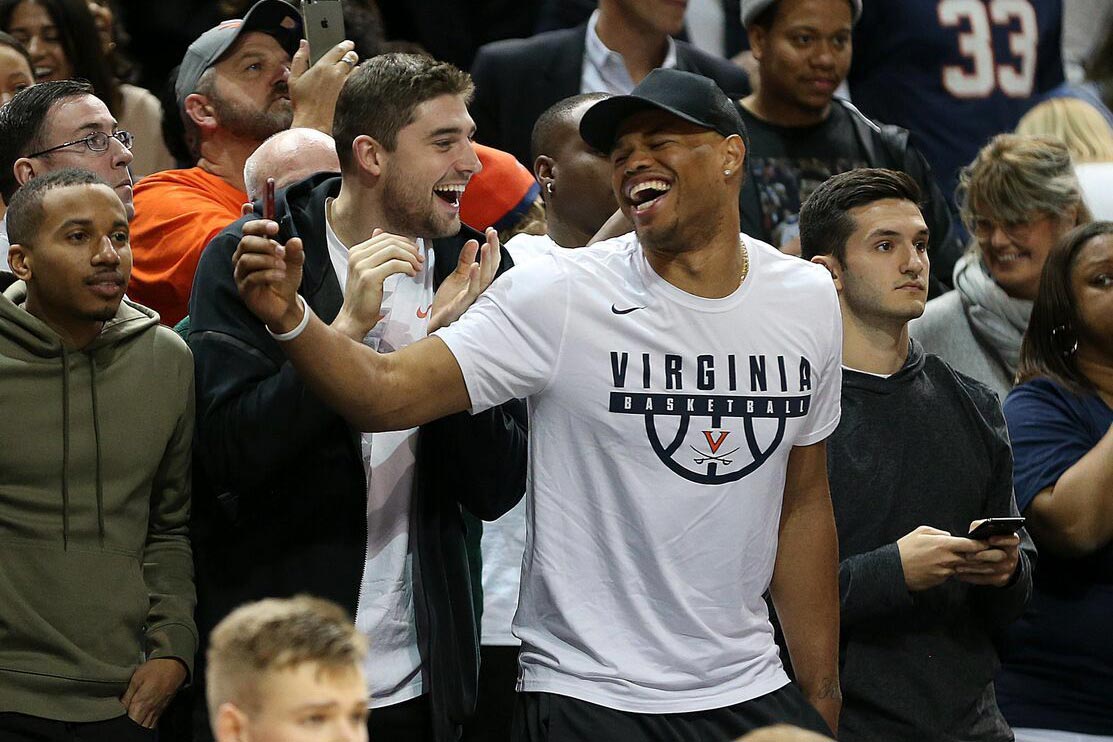 “I was really looking forward to them going into the tourney this year,” Harris said. “They damn near won the ACC again and finished 11-1 to cap off the season, beating all these teams that people were talking about being Final Four contenders, like Duke and Florida State. I was just excited for them to get into the tournament, and it was just unfortunate we couldn’t see what they were about to do. They were playing their best basketball at the right time.

“Every night somebody would show up. You’d get a massive performance from Braxton, Mamadi or Jay. Kihei was solid all year, and they were great defensively the whole time. It seemed like there always these nights where guys would just step up and have big games and big moments.”

Harris is one of eight former Cavaliers to play in the NBA this season, along with Mike Scott, Malcolm Brogdon, Justin Anderson, De’Andre Hunter, Ty Jerome, Devon Hall and Kyle Guy.

“It’s awesome,” Harris said. “It’s one of those things where you see where this program has gone, and it started with Mike Scott, where he became a solid player in the league. You build a reputation around the league where these guys that are making the decisions, whether it’s front office or coaches, they respect and enjoy having UVA guys on their team.

“It’s just sort of indicative of what Coach Bennett has built in his program. You’re going to get guys that aren’t problems in the locker room, they’re going to work, they’re going to come in with even a leg up, in my opinion, in terms of the knowledge of the game, being a professional, understanding that most coaches prioritize defense. At the end of the day if you can’t defend and hold your own on that end of the court, you’re not going to play, regardless of how good you are offensively, especially as a young player. I saw it with De’Andre and Ty. These guys are able to come in and add a sense of value to these organizations, and I think it’s because of what was instilled in them at UVA.”

Like his peers in the NBA and hoops fans around the world, Harris has been spellbound by “The Last Dance,” ESPN’s 10-part documentary series on Michael Jordan and the Chicago Bulls.

“‘The Last Dance’ is not that different from a lot of NBA teams,” Harris said. “There are so many dynamic personalities. That’s the thing that a lot of people on the outside looking in don’t quite realize. You don’t see all the stuff behind the curtain. There’s just a lot of stuff going on, on almost every team. Sometimes the hardest thing for these head coaches is just managing and getting these egos to be all on the same page. That’s why Phil Jackson was such a great coach. It wasn’t because he was tactically or Xs and Os better than everybody else. He just got everybody to buy into the same thing, and that’s the challenge with so many people.”