My Road to the Final Four and the Orange Bowl 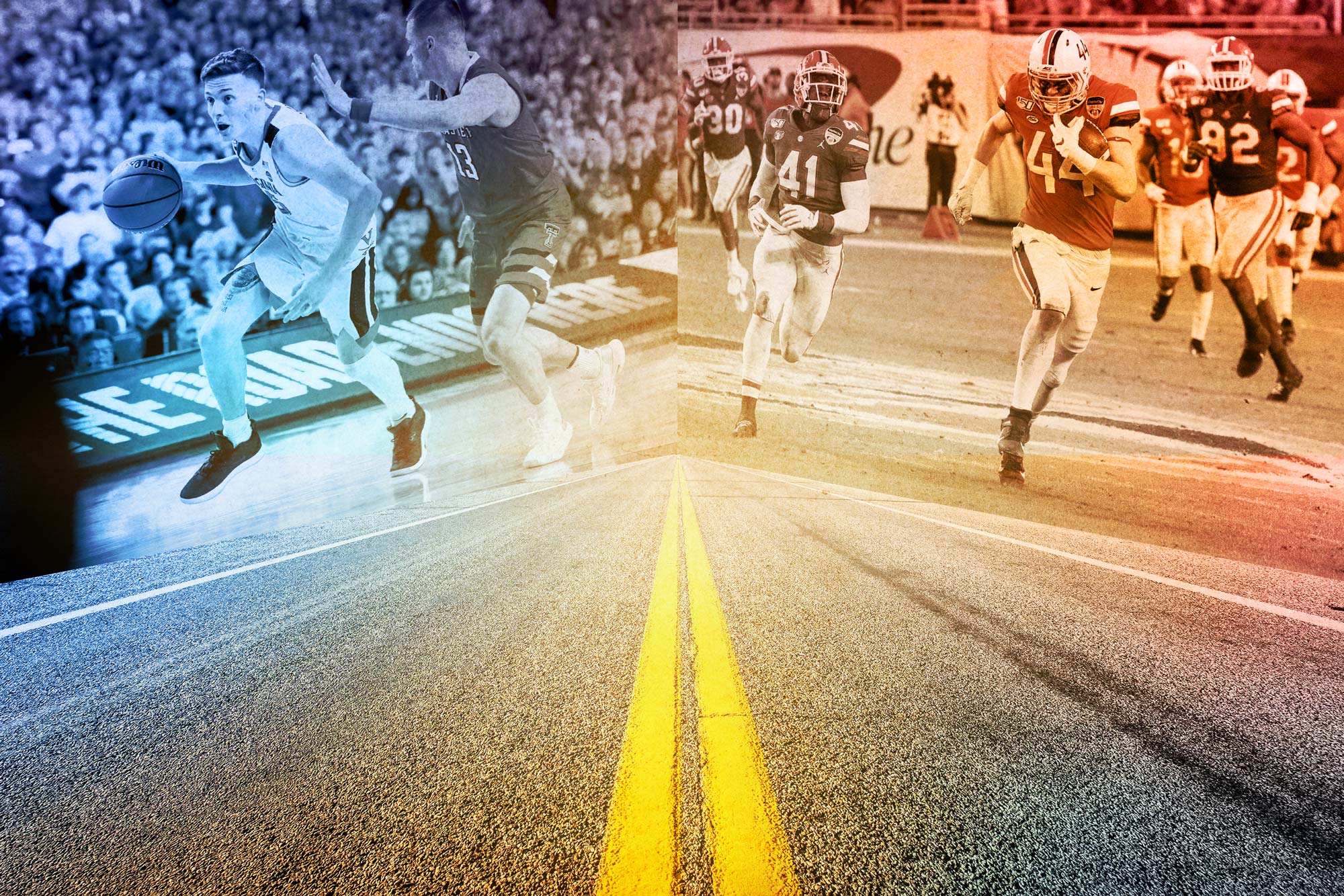 One of my favorite things about writing for UVA Today is the variety of subjects I cover: researchers changing how we think about autism or cancer; students who have overcome extraordinary odds and are determined to leave UVA better than they found it; faculty members who give me an expert window into everything from art history to biomedical engineering; special guests from Leslie Odom Jr. to Bill Clinton.

In 2019, that variety included a Final Four and an Orange Bowl trip.

I never envisioned myself as a sportswriter, but I have always been a fan. ESPN was perpetually on in my house, and my family lives and breathes University of Alabama football. Coming to UVA as a student in 2008, and now as an employee, I have also discovered the thrills of college basketball (played at the correct pace and with elite defense, of course).

Last April, when Kyle Guy sank those three free throws against Auburn University (a particularly sweet victory for this ’Bama fan), I booked my tickets to Minneapolis as soon as I could breathe again. Less than 48 hours later, I found myself at U.S. Bank Stadium not just as a fan, but as a reporter. My role there – and our goal at UVA Today – was not to provide play-by-play coverage of the games, but to tell our readers more about who these student-athletes are, and to highlight the community of students, alumni, staff, faculty members and fans brought together by the team and this University.

And so, with that goal in mind, a UVA Today press pass around my neck and laptop in my arms, I joined a swirl of seasoned veterans from ESPN and Sports Illustrated, some of their badges bearing names that I recognized from years of sports fandom.

They seemed unmoved, but I could not stop myself from gaping. Did you know that they provide the media with food? A whole buffet deep in the bowels of the stadium. There were even little trailer restrooms tucked behind the rows and rows of charging stations. Perhaps most remarkable of all, the men’s line trailed around the corner while the women’s was free and clear, given that there were about 10 of us. The championship game, as Hoos everywhere know, was a thriller. I rode the highs and lows from the press seats behind the UVA student section, trying to appear as professional as I could while wanting to scream my heart out. The man on my right – I think he was from a Texas radio station – and I got into a quiet competition; he subtly pumped his fist whenever Texas Tech scored, I pumped mine whenever Kyle, Ty, Dre and company sank a basket or forced a coveted shot clock violation.

As the final minute of overtime neared and we realized we would win, the UVA Athletics media team around me – all dedicated professionals who work tirelessly to provide excellent coverage of every UVA sport – seemed to pause for just a moment, savoring what this team had achieved. Then, they sprang into action – one inching closer to the court with his camera, ready to video the players’ reactions, another hard at work on the radio broadcast, another wielding his iPhone for real-time social media coverage.

Not really knowing what I was supposed to do, I grabbed my notebook and ran toward the court as confetti rained. I wasn’t sure if my pass allowed me on the court, but no one stopped me and minutes later I was meeting DeAndre Hunter’s lovely mother, who was so thrilled for her son she could hardly speak. Wanting to let his family enjoy the moment, I moved on, and spotted former Hoos Malcolm Brogdon, Joe Harris and Justin Anderson at center court, each of whom I had cheered for years from the stands.

They were surrounded by other members of the media, so I figured they were fair game. I was pretty starstruck and had to stand on my tiptoes to get their attention – those guys are tall – but they were incredibly gracious and their pride and joy for head coach Tony Bennett, his players and their University shone through every word.

I stopped to watch as Coach Bennett cut down the nets – some moments just don’t need words – and then, as the team left the court to celebrate, I hustled back to the media room and flung open my computer, hoping to get a few paragraphs done before Bennett’s press conference. It was a late night. I filed my game story around 1:30 a.m. (2:30 a.m. for my editors on the East Coast; sorry y’all). After, I stopped to say “hi” to some UVA friends, and interviewed more fans for a story the next day. I got back to my Airbnb at 5 a.m., and had to be up at 6 to meet up with friends who had rented a minivan to get us to the Chicago airport. I wrote my next story in the third row of that minivan, setting up a hotspot on my phone and filing it as we motored through Minnesota. Finally, on the plane back to Charlottesville surrounded by other bleary-but-jubilant Hoos, I slept.

Roughly eight months later, at the end of an extraordinary year for UVA athletics, I was on a plane to Miami to do it all again. This time, it was to follow Bronco Mendenhall’s rapidly rising football team as the Cavaliers finished their season with the Capital One Orange Bowl.

Our University photographer, Sanjay Suchak, and I hustled from tailgate to tailgate before the game, speaking to UVA fans who had traveled from all over Virginia and the country to cheer on the Hoos. We met so many wonderful people, from a fan who handmade cornhole sets for his tailgate and even for Mendenhall himself, to parents of current players, whose pride in their sons and love for each other was abundant and joyful. Watching the team play on a national stage was a thrill and, despite the loss, they showed more than enough skill, toughness, heart and spirit to make any Cavalier fan proud. Plus, they gave us five opportunities to sing “The Good Old Song,” which always makes me happy.

Every play was made even better by all that my colleagues and I have learned about the team this year. When Charles Snowden made a tackle, I knew that he was not only a great defender, but a dedicated friend to the little patients in the UVA Children’s Hospital, showing up before every home game to make them smile.

When Bryce Perkins threw one of his incredible passes, I knew all that he had been through before UVA – including a broken neck – and how much his professors admired his intellect and work ethic.

When Mendenhall gathered his team together, I saw not only his leadership on the field, but his commitment to programs like Thursday’s Heroes, which brings children facing challenges to a UVA football practice each week, and his determination to build a top-tier football program with top-tier academics.

I could keep going, but you get the picture. Covering the Orange Bowl – and the national championship – was sweet, but it was even sweeter because of the people I was covering and the community I shared the stories with. I admire the student-athletes who represent UVA so well, and I love the place and the people they stand for. A Year We Will Never Forget: 2019-20 in Review END_OF_DOCUMENT_TOKEN_TO_BE_REPLACED

‘What Will You Carry With You?’ Remarks From UVA President Jim Ryan END_OF_DOCUMENT_TOKEN_TO_BE_REPLACED