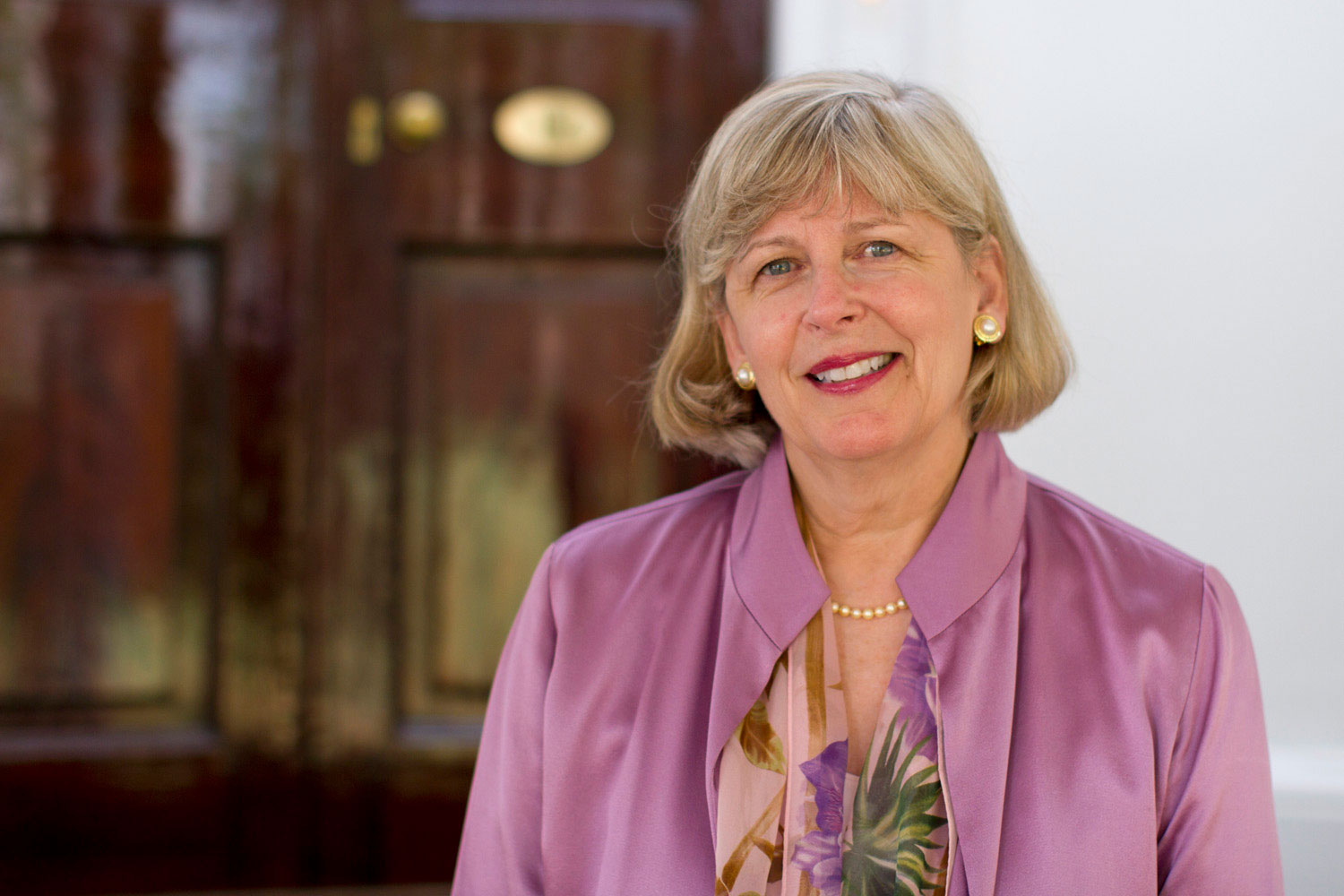 If there is one word that captures Dorrie Fontaine’s contributions to the University of Virginia, its School of Nursing and her leadership, it would be “compassion.”

From establishing the Compassionate Care Initiative 10 years ago to addressing the Class of 2019 at Final Exercises, Fontaine has been one of UVA’s most empathetic, forthright and inspiring leaders.

To add to her many accolades, the Maxine Platzer Lynn Women’s Center has selected Fontaine to receive the University’s 2019 Elizabeth Zintl Leadership Award.

The award, first given in 1998, honors the memory of Zintl, an accomplished writer and journalist who served as chief of staff to the UVA president until her untimely death in 1997 at age 45. It recognizes a female employee who has given an “unusually high degree of service to the University, within and beyond the expectations of the position” and “whose excellence in work makes a direct and significant impact on the core academic enterprise.”

Awardees for the past five years were: Deborah McDowell, director of the Carter G. Woodson Institute of African-American and African Studies and Alice Griffin Professor of English (2018); Rachel Most, associate dean for Undergraduate Academic Programs and archaeology professor (2017); Pamela Norris, Frederick Tracy Morse Professor of Mechanical and Aerospace Engineering (2016); Farzaneh Milani, who has chaired the Department of Middle Eastern and South Asian Languages and Cultures and directed the Women, Gender, and Sexuality Program (2015); and Jane Miller, who served as senior associate athletic director for programs (2014).

“All the recipients are inspiring women with a great story to tell. They often speak to the women who helped them here at UVA and in life, and I have admired the messages,” said Fontaine, who said she has attended every Zintl Award ceremony since arriving on Grounds. She added that she’s “very honored and humbled to receive this award.”

Fontaine will be honored at a reception on Oct. 15.

She retired from her dean position July 31. Pamela F. Cipriano was appointed interim dean as of Aug. 1.

Fontaine is taking a sabbatical this year. She and colleagues Natalie May and Tim Cunningham are co-editing a book, tentatively titled, “Caring for Ourselves, Caring for Others: A Self-Care Handbook for the Student Nurse.”

Among the hallmarks of Fontaine’s 11-year tenure as Nursing School dean were a focus on creating a healthy work environment; fostering inter-professional education, where nurses and physicians train together; and furthering efforts for inclusion and diversity in nursing and across the University.

Fontaine founded UVA’s Compassionate Care Initiative in 2009, with a mission of alleviating human suffering through developing compassionate caregivers and systems. The initiative nurtures students, faculty, staff and clinicians to become resilient and know that caring for themselves provides a foundation for the safe and exceptional care of others.

As recently as Aug. 20, she and the School of Nursing were cited in an article in the Buddhist journal “Tricycle” about “timely advice for countering burnout.” In the article, she talked about attending Roshi Joan Halifax’s “Being with Dying” training program for health care professionals with a group of 10 UVA health care providers during her first year as dean.

“It was life-changing, and it shaped how I led the school. It was about dying, but it was really about stopping your life and thinking about how you could make the most meaningful contribution,” she said. 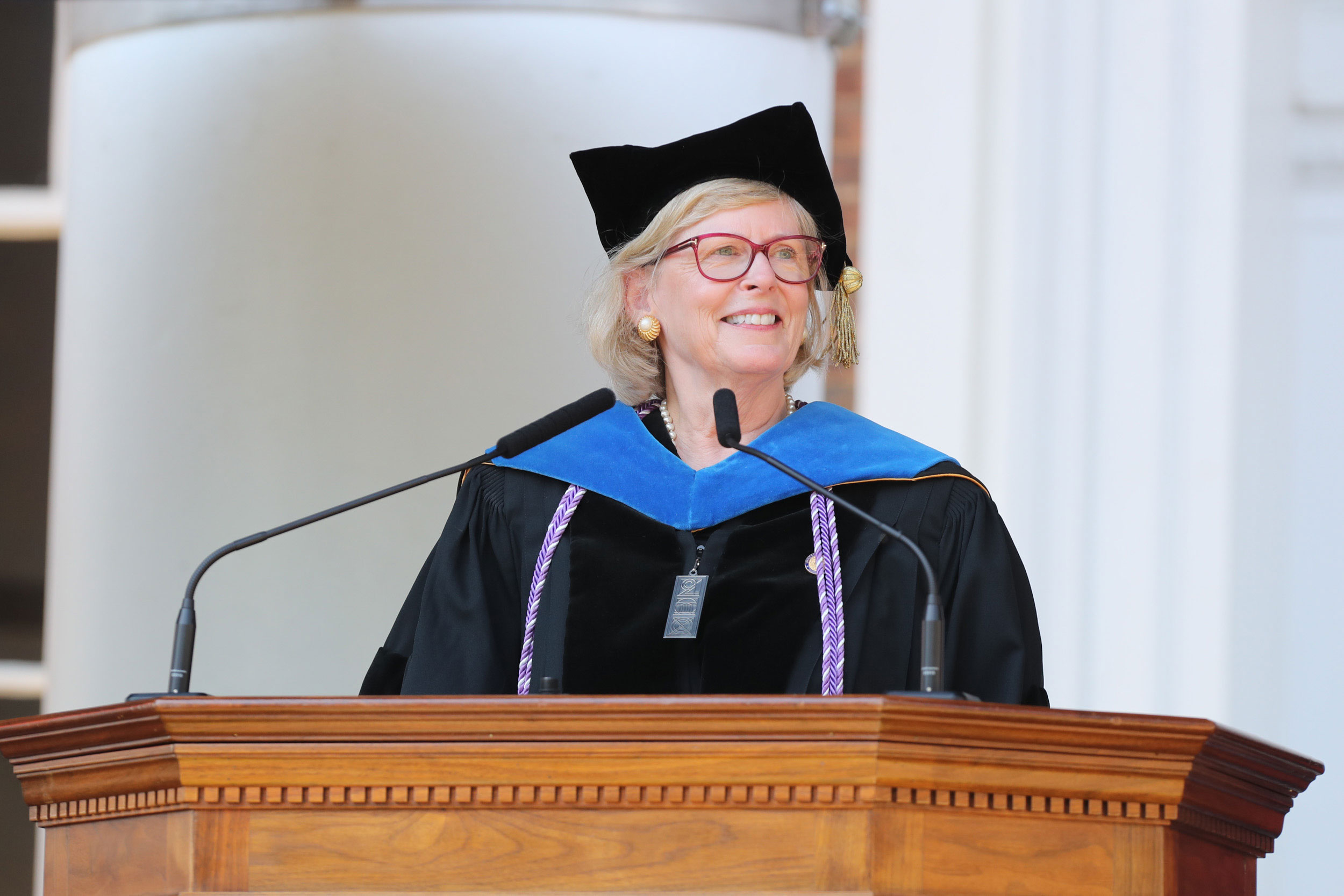 In her May 19 Final Exercises address, she told the graduates that her 47-year career could come down to these two words: “notice” and “pause.”

Others have noticed her leadership and lauded her efforts to enhance the work environment and culture of health care and academia.

Nominator John Teahan, associate dean for administration at the Nursing School, called Fontaine “a compassionate and dynamic citizen of the University.”

School of Law Dean Risa Goluboff, writing in support of Fontaine’s nomination, called her “a servant-leader” and wrote that as one of three female deans, Fontaine went “out of her way to mentor me and to support me at every turn.”

“She has been a true role model,” Goluboff wrote. “She combines like no one I have known before warmth, compassion, and empathy with a tough-as-nails, makes-the-hard-calls approach to decision making. She has taught me that empathy always has a place, but that one must be reflective and self-aware about the proper recipient – recalling especially empathy for the thriving of the institution as a whole.”

Her compassion and honesty especially extended to the School of Nursing’s inclusion and diversity efforts. Goluboff, Teahan and Susan Kools, associate dean for diversity and inclusivity in the school, pointed out that Fontaine, as part of the Deans’ Working Group convened after the white supremacist “Unite the Right” rallies in 2017, challenged the University to confront the racism and anti-Semitism in its midst. She established an Office for Inclusion, Diversity and Excellence at the School of Nursing in 2014, which launched the school’s “Inclusion, Diversity and Excellence Achievement Initiative,” and received the UVA Health System’s Martin Luther King Jr. Award in 2015.

Abby Palko, director of the UVA Women’s Center, said, “As a leader, Dorrie is inspiring because she articulates ideals and then puts into practice policies and procedures that support those values. The [selection] committee was clear that they were selecting her not just because she led the School of Nursing so effectively, but also because of the ways she has shown up to help UVA live out its ideals.

“One profound example was her support of and participation in the Institutional Equity Initiative led by Shaun Harper as part of her commitment to addressing issues of race in the aftermath of Aug. 11 and 12 in 2017. … She dedicated the rest of her time as dean to modeling difficult conversations about race and racial disparities,” Palko said.

In addition, she led the School of Nursing through several successful changes. During her tenure, applications to the school’s undergraduate program tripled, several of its nationally ranked graduate programs were established and expanded, nursing faculty garnered more than $25 million in grants, and nearly $55 million in gifts and bequests were raised from alumni, friends and foundations. The school’s Clinical Nurse Leader master’s program – the commonwealth’s first fast-track to nursing program for individuals from outside the profession –nearly tripled in size since its 2005 founding, and attracted $10 million in support.

Fontaine oversaw the creation of the school’s successful Continuing Education programs in 2015, a series of new courses on mindfulness and leadership, a new “Wisdom in Nursing” curriculum for undergraduates, and a new palliative care concentration for graduate nursing students. She also established guaranteed admissions for Virginia community college graduates applying to its R.N.-to-B.S.N. program, developed two new pathways for nurses to earn a Doctor of Nursing Practice degree, and established the commonwealth’s first neonatal nurse practitioner specialty program in 2017.

A member of UVA’s Raven Society, she received the Raven Faculty Award in 2018, and, in 2017, the Gordon F. Rainey Jr. Award for “vigilance to the student experience.”

A longtime resident of Pavilion IX, Fontaine and husband, Barry, have hosted hundreds of events, courses, lectures and celebratory gatherings for students, faculty, staff, parents and alumni. They will keep that address until February, when they will move back to Washington, D.C. She’ll remain on the faculty until August, and plans to keep supporting the Nursing School and UVA.

What’s Next for UVA’s Class of 2022? END_OF_DOCUMENT_TOKEN_TO_BE_REPLACED