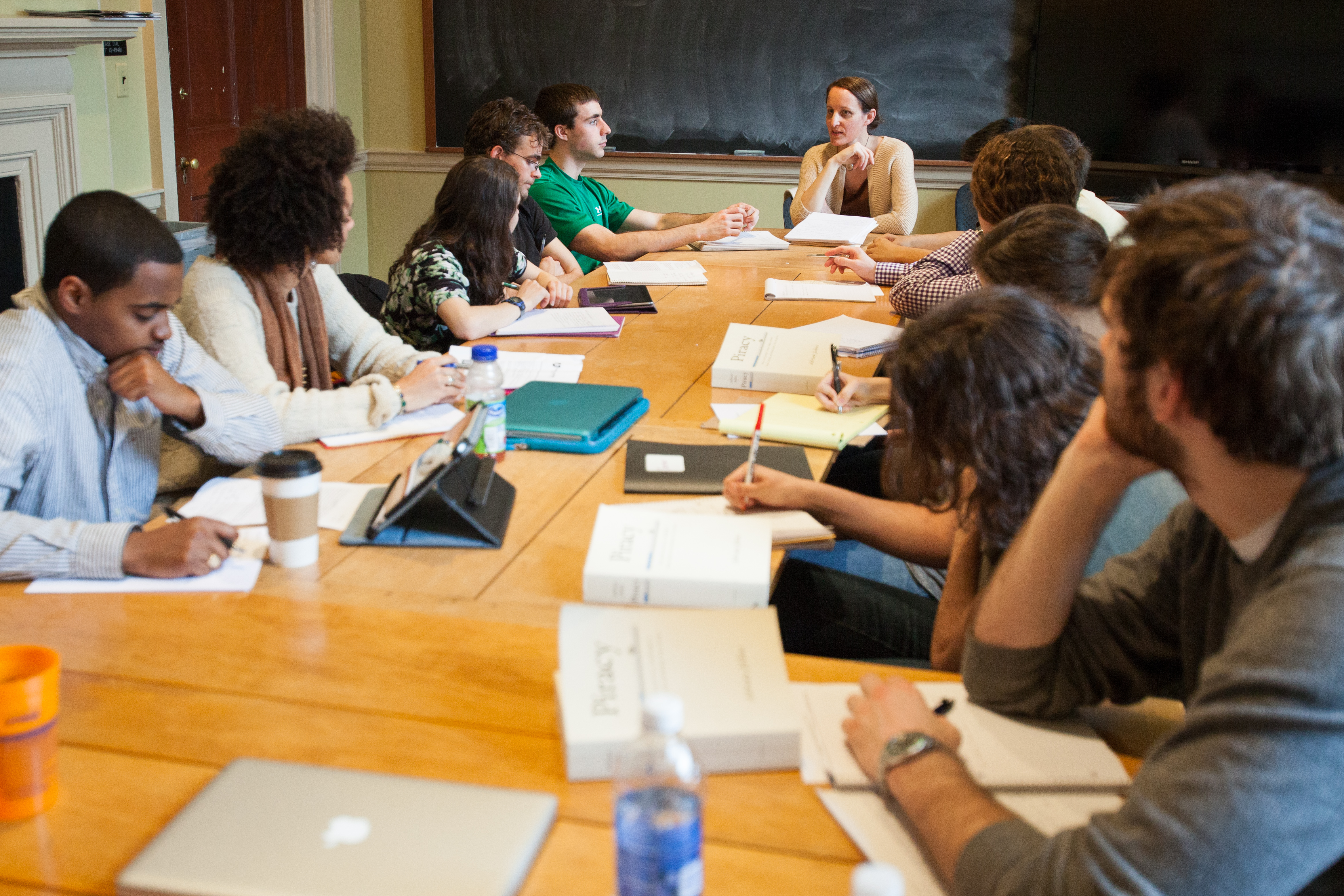 Around a long table in Pavilion VIII on the Lawn, a lively discussion about Siva Vaidhyanathan’s “The Googlization of Everything (And Why We Should Worry)” takes place in “The Ends [of Books,” a seminar about the purpose and future of books led by Andrew Stauffer, an English professor in the College of Arts & Sciences.

The students debate the pros and cons of Google, touching on the fair use of copyright materials and privacy issues behind the search engine’s collection of user data. They mull whether the Internet and electronic publications like Google Book will one day replace physical manuscripts.

Unlike most upper-level seminar discussions, this one has students weighing in from various intellectual perspectives, as the assembled students come from multiple fields of study. (Indeed, even the book’s author is a U.Va. media studies and law professor.) Throughout the course of the debate, students hear psychological, scientific and literary points of view from their peers.

Stauffer’s class is a part of the College’s Pavilion Seminars program, which continues Thomas Jefferson’s original vision for his Academical Village to present day. Funded by the the U.Va Alumni Association’s Jefferson Trust, the Pavilion Seminars seek to replicate the University founder’s plan for interdisciplinary learning and close faculty-student interactions with classes held in the pavilions on the Lawn.

The 12 seminars offered this year cover topics ranging from aesthetics, ethics and nature to politics, law and the health sciences, and are led by faculty from several of the College’s departments. The students, too, are diverse: students represent an array of majors, bringing many perspectives to the table. With enrollment limited to 15 third- and fourth-year students per class, the seminars cultivate an environment of intellectual intimacy.

“These seminars are for students who are ambitious and intellectually engaged,” said Sophia Rosenfeld, a history professor in the College and director of the Pavilion Seminars program. “Students who want to look at the big picture across a lot of disciplines.”

Stauffer added, “Third- and fourth-year students have an advanced understanding of their majors, which comes to bear in the sophisticated manner of the discussions.”

The idea for this kind of Jeffersonian-inspired, upper-level interdisciplinary class began in the spring of 2011 with Vice Provost for Academic Affairs Maurie McInnis. The first 10 seminars, held last spring, were a hit, and the program expanded to offer two more seminars this year.

The topics of the seminars and the faculty leading them change each year. Mirroring the University Seminars program for first-year students, the three-credit Pavilion Seminars aim to promote and maintain academic inquiry in upperclassmen.

“The seminars are a way of making sure advanced students are staying as intellectually engaged and challenged as they were their first year,” Rosenfeld said.

Upperclassmen apply to the seminars through the same system that they use to enroll in their other classes, but also submit a short personal statement about their interest in the subject. The professors then select their students with an eye to assembling a range of backgrounds and perspectives.

Likewise, professors also apply to teach a Pavilion Seminar, Rosenfeld said. “They have to come up with an idea for a class that allows for multiple perspectives, and a syllabus that breaks with the norms.”

Rosenfeld describes the seminars as “both rigorous and untraditional.” While the classes themselves require intensive reading, writing and discussion participation, each seminar also offers students an alternative approach to its subject, either through field trips or a hands-on activity. For example, Stauffer’s seminar attended a bookmaking class at the Virginia Center for the Book, while the food politics seminar led by environmental sciences professor Manuel Lerdau took students to local farms and supermarkets. On April 8, students in politics professor David Leblang’s seminar on global immigration will meet with U.S. Rep. Robert Goodlatte, R-6th, chairman of the House Judiciary Committee, to discuss the immigration legislation he and his colleagues are crafting.

Rosenfeld’s class, “Free Speech,” explores the history of the First Amendment and the philosophical and legal debates on censorship in the United States and in other countries. Like the other seminars, her class is 2½ hours long and meets once a week in Pavilion VIII.

Fourth-year Sharon Rogart called Rosenfeld’s seminar a “serendipitous” class to take during her last semester at U.Va, as it combined a topic which interested her with an interdisciplinary strain of thinking.

In the future, Rosenfeld hopes to expand the seminars outside the College and include students and faculty from other U.Va schools. “Since these seminars are not along disciplinary or major lines, there could be exciting possibilities,” she said.

Fall Is in the Air on Grounds END_OF_DOCUMENT_TOKEN_TO_BE_REPLACED