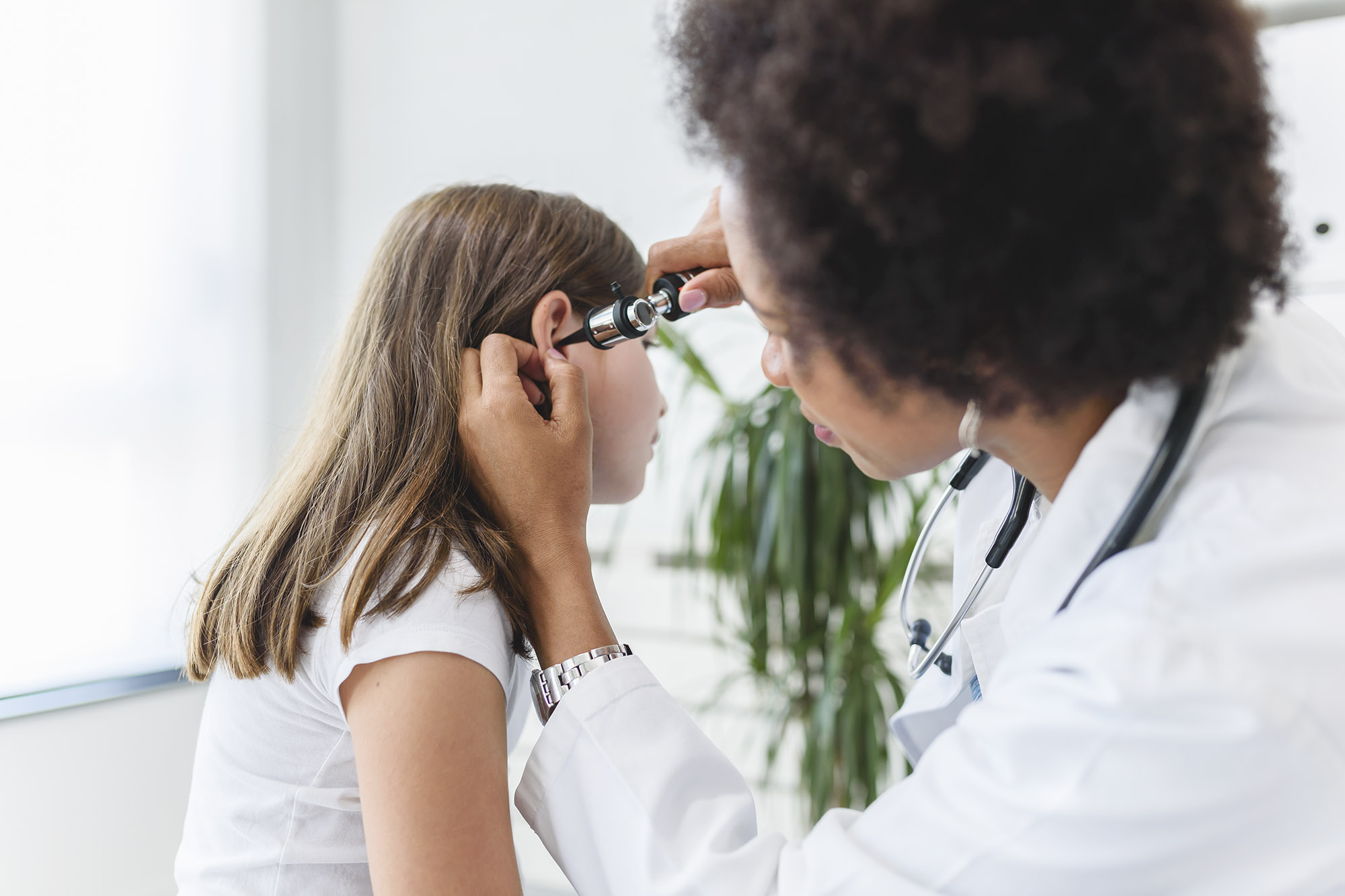 As masking and social distancing mandates across the country lifted with the rise in COVID-19 vaccines this spring and summer, other respiratory viruses, such as rhinovirus and respiratory syncytial virus – usually known to spike in winter – returned and spread, especially among children. The CDC said in a July statement that as coronavirus avoidance measures relaxed, other viruses began circulating at increased levels at an unusual time of the year.

The University of Virginia’s Dr. Abigail V. Kumral described the local rise in ear infections and viral upper respiratory infections in a piece for The Conversation, republished below. A member of the UVA general pediatrics clinical faculty since 2016, Kumral sees patients at UVA Northridge Pediatrics.

Here’s what she had to say in The Conversation.

ar pain is one of the most common reasons that young children go to the doctor, and acute otitis media – which means “middle ear infection” – is the most frequent cause for the use of antibiotics in children under 5 years of age. Twenty-five percent of children will have an ear infection by their first birthday, and 60% by age 5.

This summer, with the lifting of COVID-19 restrictions, we saw a return of many respiratory viruses, and with them, middle ear infections.

How an Ear Gets Infected

The middle ear space, which is the space behind the ear drum, is connected to the back of the throat via the eustachian tube. When people, especially children, get congested, they tend to collect fluid in this space.

If a child has a cold and stays congested for awhile, that buildup of fluid can become infected, usually by bacteria that have migrated from the back of the nose or the throat. As children grow, their skull lengthens, and the eustachian tube can drain more easily because it begins to slant downward toward the back of the throat. Over time, children also build immunity to common cold viruses and get sick less often, so overall ear infections decrease with age.

The three most common bacteria that cause middle ear infections are Haemophilus influenzae, Streptococcus pneumoniae and Moraxella catarrhalis.

Interestingly, before we had pneumococcal vaccines against Streptococcus pneumoniae, these bacteria caused about 60% to 70% of all ear infections in children between 6 months and 5 years of age. But after these vaccines were added to the childhood immunization series in 2001, overall rates of ear infections dropped, and the proportion due to strep pneumo has gradually decreased to 15% to 25%. Haemophilus influenzae now causes the majority of ear infections.

Guidelines for Diagnosing and Treating

The American Academy of Pediatrics’ most recent guidelines for acute otitis media, which is diagnosed by physical exam, came out in 2013. A doctor will look in a child’s ears with an instrument called an otoscope to see if the ear drum is red or bulging or if it has fluid behind it. Sometimes the doctor will use a small puff of air in the ear to see if the ear drum moves well. If there is an infection behind the ear drum, it will not move with the air.

Acute otitis media is typically treated with antibiotics, which are generally recommended for ear infections in children younger than age 2. For children over 2, antibiotics are recommended if there is a fever or severe pain, or if both ears are infected. In the absence of fever or if the infection is on only one side, the recommendation is to wait a day or two before starting antibiotics, as sometimes these infections will clear on their own in older children.

This differs from treatment for outer ear infections – otitis externa, or “swimmer’s ear” – which can be treated directly with antibiotic ear drops. When the ear canal is very swollen, a wick of gauze may be used to carefully get the antibiotic drops deeper into the ear canal.

How to Prevent Ear Infections

Following recommended childhood vaccination schedules is a big part of preventing ear infections, or at least decreasing their frequency. Pneumococcal vaccines are particularly important. Ear infections are a common complication of influenza in children; about 40% of children younger than 3 years get an ear infection with the flu. So getting a flu vaccine each year can also help prevent ear infections.

Breastfeeding has also been shown to be protective against ear infections, with exclusive breastfeeding for the first six months providing the most protection. Higher levels of protective antibodies in breastfed infants as well as immunologic factors found in breast milk help provide this protection.

Children who are exposed to more viral upper respiratory infections are at increased risk for ear infections. Children in group day care settings are exposed to more infections, and thus have higher rates of ear infections. That being said, as the mother of a child who loves his day care, it is important to note that group child care is often the most affordable or the only option for families, so it is unclear if day care avoidance is really possible. Since ear infections are much less common in older children, school is less of a risk than day care.

Some children get ear tubes to help prevent recurrent ear infections. If your child has had at least three ear infections in six months, or four in a year, your pediatrician might refer you to an ear, nose and throat doctor to decide if this surgery would be beneficial for your child.

What’s Next for UVA’s Class of 2022? END_OF_DOCUMENT_TOKEN_TO_BE_REPLACED