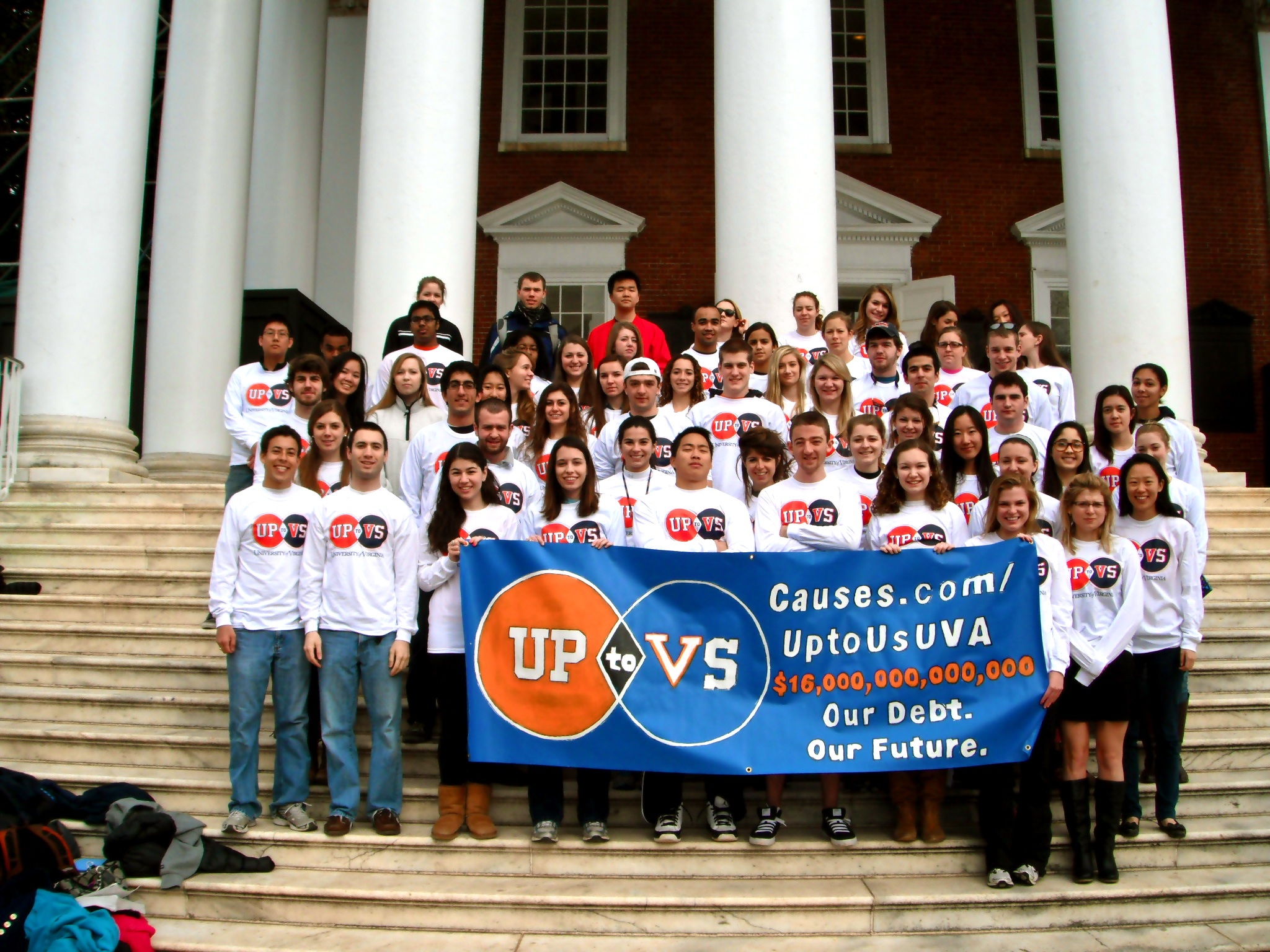 Five University of Virginia students will share a stage Saturday with former President Bill Clinton and will take home a $10,000 check for winning a nationwide competition to engage and educate college students about the federal government’s long-term debt.

The U.Va. students – Lena Shi, Joshua Lansford, Alan Safferson, Ryan Singel and Amara Warren – made up one of 10 university teams who took part in the first-of-its-kind, six-week Up to Us competition, which challenged the teams to bring the debt discussion to their peers through independently designed campaigns.

“I’m very proud of this team’s creative efforts to address one of the biggest challenges our nation faces,” U.Va. President Teresa A. Sullivan said.

The competition was sponsored by the Peter G. Peterson Foundation, the Clinton Global Initiative University and Net Impact, and was judged by a distinguished foursome: Clinton Foundation board member Chelsea Clinton; George Stephanopoulos, anchor of ABC’s “This Week” and “Good Morning America”; and the co-chairs of the 2010 National Commission on Fiscal Responsibility and Reform: Erskine Bowles, former Clinton White House chief of staff, and former U.S. Sen. Alan Simpson.

“The Up to Us competition proves that students can play an important role in addressing our nation’s economic challenges,” Clinton said in a press release. “The young people who participated in this competition brought passion, energy and creativity to solving one of our most urgent issues, and raised awareness in their own schools and communities.”

The competition judges singled out the U.Va. team for the impact of its innovative campaign. The team spent roughly 550 hours organizing 20 major events, including a rally at the Rotunda; a “HOOs Talking about the National Debt” discussion led by three faculty experts; screening a documentary film about the debt, “I.O.U.S.A.”; four Flash Seminars, each led by a U.Va. professor; a dinner on health care spending; presentations to classes and student groups; and a savings workshop, said team co-leader Shi, a fourth-year global development studies major in the College of Arts & Sciences who is also earning a master’s of public policy from the Frank Batten School of Leadership and Public Policy.

One event brought together University Democrats, College Republicans and other students to come up with a bipartisan proposal to address the debt, which the team intends to circulate to elected representatives.

The team brought U.S. Sen. Mark Warner to U.Va. on Feb. 11 to discuss the debt. After speaking with a crowd of more than 500 people, Warner, a Virginia Democrat who sits on the Senate Budget Committee, praised the team as an example of what college students can achieve, saying, “The U.Va. students got me energized, ready to go back to the Hill and keep fighting.”

The students from U.Va. will be recognized by Clinton Saturday at the annual Clinton Global Initiative University student meeting in St. Louis where they will be awarded the $10,000 prize.

The second-place team was from Brown University, and the third-place finishers were from the University of Texas-Austin.

The U.Va. team plans to use the prize money to continue to engage college students on the debt issue by sponsoring policy- and debt-related internships and research, in addition to establishing the first undergraduate Net Impact chapter, Shi said.

The team’s efforts “set the gold standard for how collaboration should be done at this university,” said Mary Margaret Frank, a professor and academic director of the Initiative for Business in Society at U.Va.’s Darden School of Business, one of 11 schools and departments that were involved in the campaign, along with more than a dozen student organizations.

Shi said she was most proud of “seeing how students’ voices came to life through this campaign. Students took the initiative to learn about this issue, grew to see its relevance to their education and future, and then worked to spread the word to others.”

Student teams from the following universities participated in the competition:

What Is the ‘4th Side’? END_OF_DOCUMENT_TOKEN_TO_BE_REPLACED