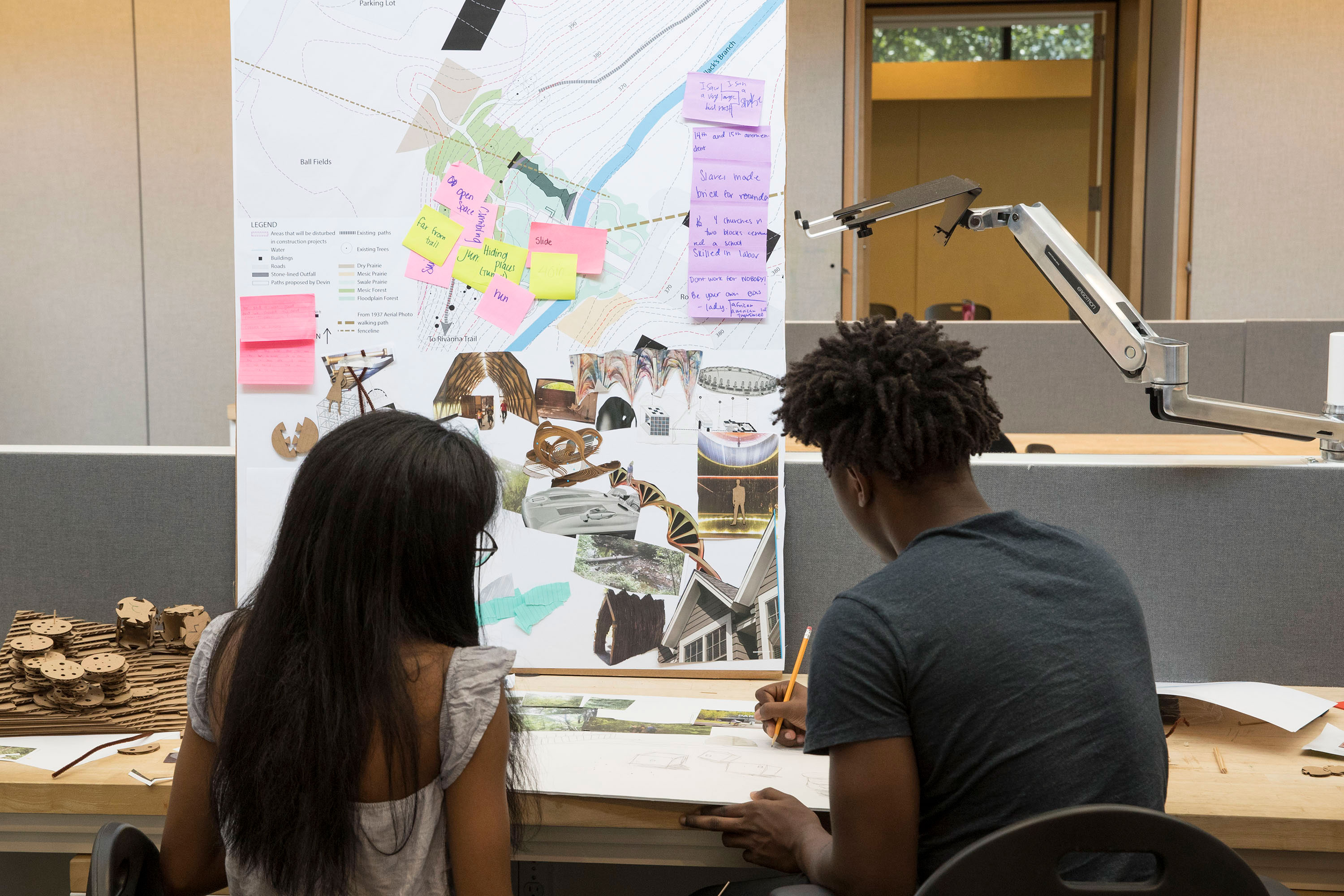 On a warm Thursday afternoon earlier this month, seven high school students were holed up on the fourth-floor studios of Campbell Hall at the University of Virginia School of Architecture, busily preparing their final design presentations for a small park in Charlottesville’s South First Street public housing neighborhood, where some of the students live. 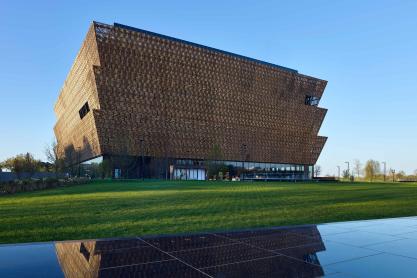 It was the second-to-last day of Project Pipeline, a new School of Architecture program affiliated with the National Organization of Minority Architects that welcomed local high school students for a two-week paid internship. Students got an introduction to architecture, urban planning and landscape architecture; took field trips around Charlottesville and even to Washington, D.C.; and worked on their own designs for the park, which they presented to community housing leaders at the end of the program.

“It has helped a lot of us figure out what we enjoy about designing and building,” said Patricia Yao, a recent Charlottesville High School graduate and soon-to-be Piedmont Virginia Community College student. 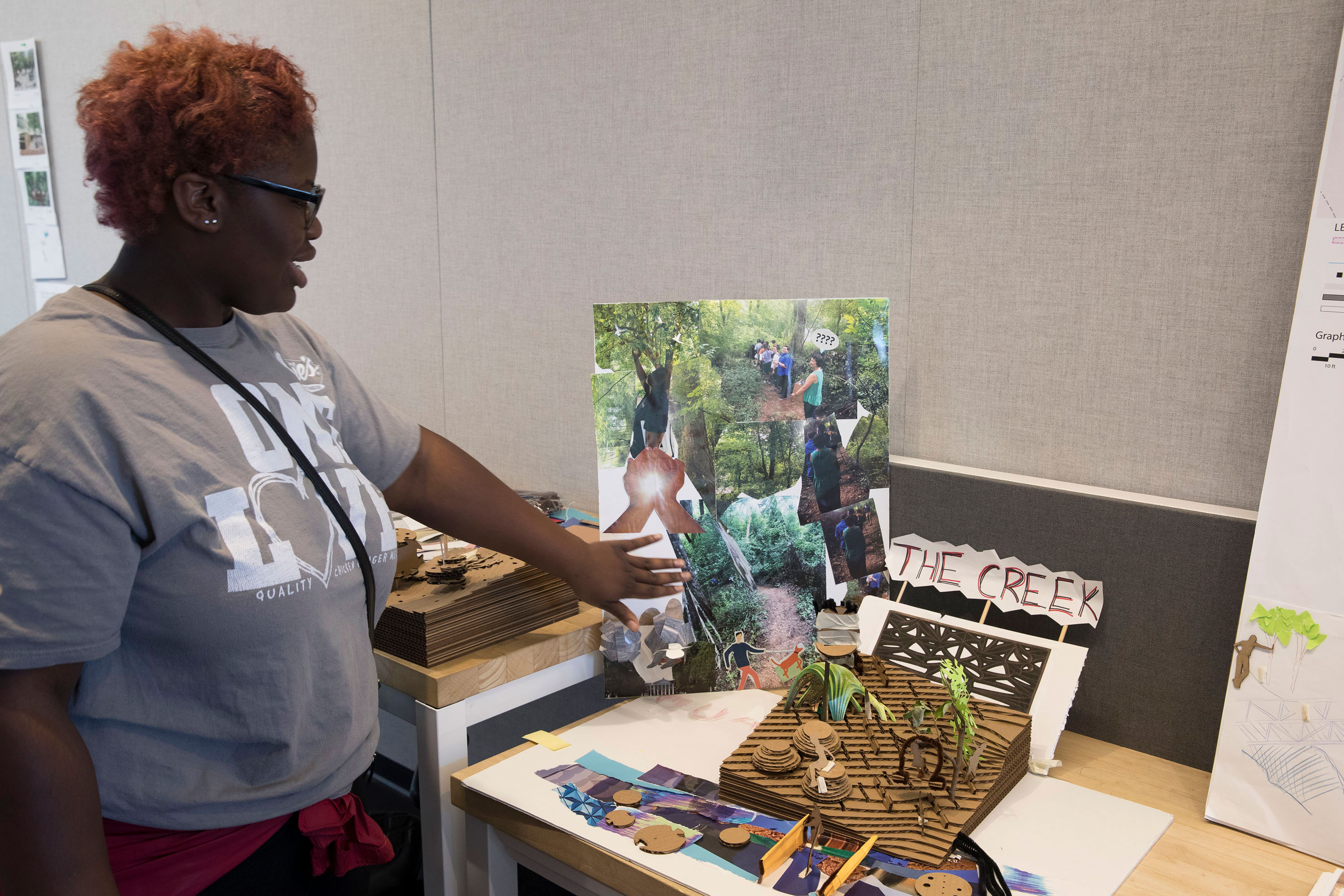 Yao with the model she built showing her inspiration for the South First Street project. (Photo by Dan Addison, University Communications)

“It taught me that I am creative,” she said, gesturing to the model of the park she designed. “I had never done anything like this before.”

The project started when Audrey Oliver, a resident of the South First Street public housing neighborhood and a leader of the Charlottesville Public Housing Association of Residents, approached city officials and, eventually, UVA professors about the possibility of designing a small park near the Pollock’s Branch creek. The city is putting a pedestrian bridge on the site and has to take down a historic ash tree.

“The woods down there are just beautiful, and I always wanted to figure out how we could make it a therapeutic area – somewhere to walk, hike or just relax,” Oliver said. “The message eventually spread, and [UVA professor] Barbara Brown Wilson got in touch with me, and we talked about getting the youth together.”

Wilson, a professor of urban and environmental planning who has worked extensively with public housing communities in Charlottesville, was excited about the idea, as were her colleagues Jeana Ripple and Elgin Cleckley. Cleckley had attended a pipeline program at the Corcoran School of Art as a high school student 31 years ago.

Like Yao, Cleckley said it was the first time he “fell in love with design.”

“Because of that, I came to UVA and did my undergraduate degree here at the School of Architecture,” he said. “Pipeline projects are great because they open up the world of architecture and design and give you confidence that you can become a designer.”

They decided to start a chapter of the National Organization of Minority Architects Project Pipeline program at UVA as part of part of the school’s broader Inclusion and Equity Plan, and to use South First Street as the students’ first big project. Funding came from the National Endowment for the Arts and the Jefferson Trust, run by the UVA Alumni Association. Two UVA School of Architecture students, Brandon Eley and Lauryn Downing, were lead mentors, with Ph.D. student Alissa Diamond and planning students Kellen Dunnavant and Hunter Berry supporting the program.

Though the Project Pipeline program is open to anyone, leaders are particularly focused on raising awareness among underrepresented and minority students, working with high school teachers and guidance counselors in area schools to encourage students to apply. The $600 payment, which participants receive at the end of the program, helped make it more accessible to students of all income levels. 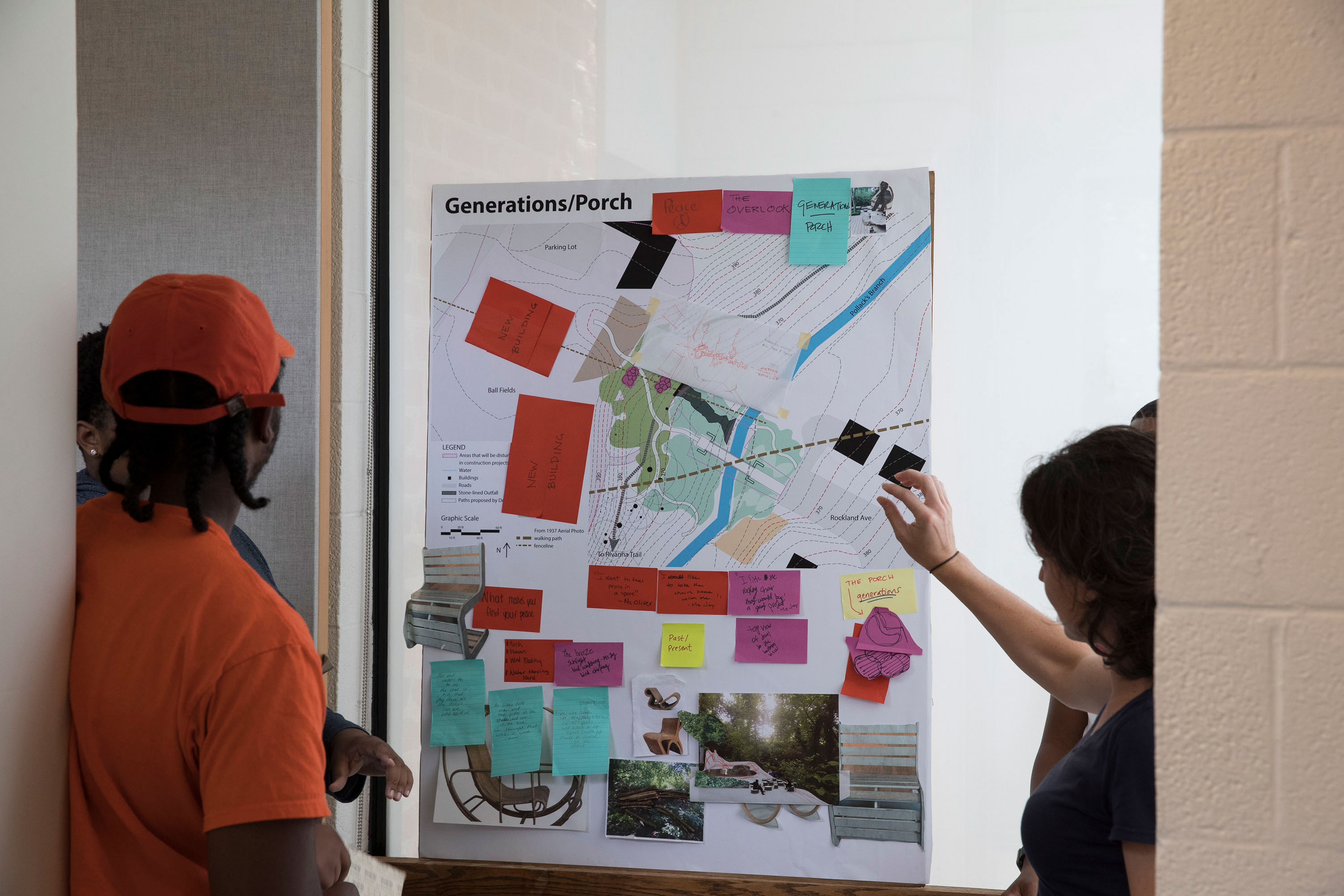 Students learned how to create architectural drawings and models and spent time in the school’s studios with undergraduate and graduate UVA students. (Photo by Dan Addison, University Communications)

For example, on a weekend trip to Washington, D.C., students visited the National Museum of African American History and Culture (which some UVA alumni helped to design and build) and other important buildings to see the designs of David Adjaye, Max Bond and Phillip Freelon, who died just before the program began and has been called the most significant African American architect in recent history.

They also visited the National Portrait Gallery and the National Building Museum to see examples of African American creativity, including portraits of former President and first lady Barack and Michelle Obama.

In Charlottesville, they visited The Fralin Museum of Art at UVA, where they saw the work of Isamu Noguchi, explained in a lecture by architecture professor Jeana Ripple; and saw the Memorial to Enslaved Laborers currently under construction at UVA with UVA planning student Kellen Dunnavant, who is working with UVA’s Facilities Management office this summer. Students also learned about the architecture of the Downtown Mall from Alissa Diamond and UVA alumnus Nathan Foley, and attended the dedication of a memorial recognizing lynching victim John Henry James.

“I learned more about Charlottesville and its history that I did not know, and I also learned how much work goes into designing something, how much thought,” high school junior Zymir Faulker said.

The students also spent a lot of time working on their own designs for the South First Street park, especially focusing on the historic ash tree that will be removed when the bridge is installed.

“They hoped we might repurpose the tree toward something meaningful and useful for the community,” Wilson, one of the faculty mentors, said. She worked with students to think about what that might look like, and to interview residents about what they would want. 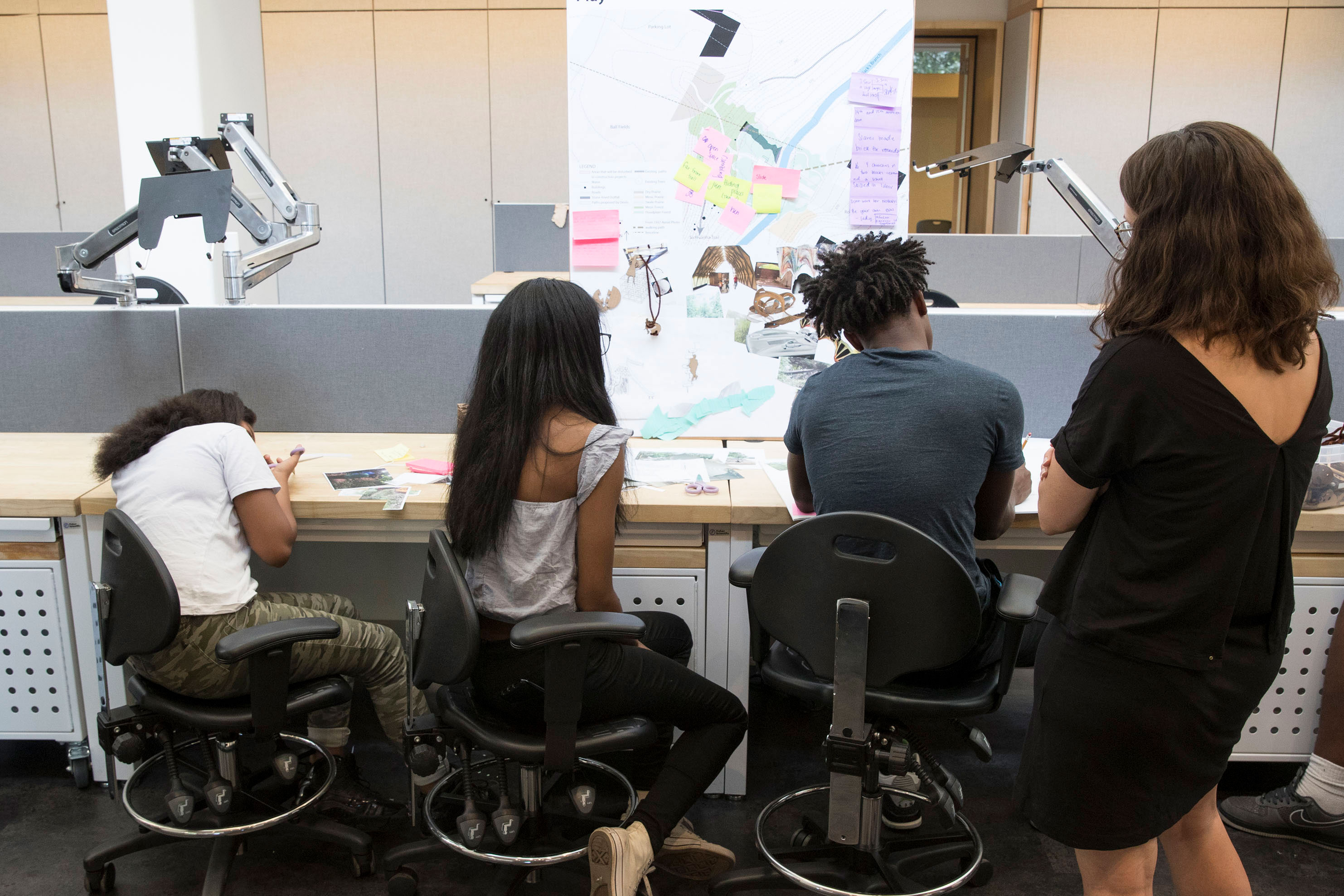 Wilson, right, was one of the faculty mentors on hand in Campbell Hall and throughout the two-week program. (Photo by Dan Addison, University Communications)

Oliver was impressed with the students’ dedication.

“Barbara brought the youth here, we showed them what we wanted and talked for a while,” she said. “Then they went right back down into the woods [to review the site again] and I thought, ‘Wow, they are so interested in doing this right.’”

Some students researched the history of the site, Oliver said, and found evidence that it was once home to enslaved laborers. All of the students brainstormed their own designs, creating models that they presented to Oliver and other housing officials last Friday.

Faulker and his friend, Izaiah Richardson, based their design on a simple, almost universal childhood memory – playing hide-and-seek.

“We all talked about playing hide-and-seek on the playground,” Faulker said. Their design calls for elevated paths and a tumble of sleek, hollow cubes that use wood from the ash tree – and offer some great hiding places.

“We wanted to create a place where people can relax and play at the same time, with space to do both without interrupting each other,” he said.

The two signed up for the program to “try something new.” Richardson didn’t know much about architecture, other than what he had seen on television. Faulker has a few family members who work in the field.

Two weeks later, they were both glad they came.

“I wanted to try something different this summer, instead of sitting around the house for two weeks,” Faulker said. “I think this is great experience.”

Oliver said she was thrilled with the students’ final designs, which will be on display in the School of Architecture this fall. Four of the young designers have been invited to help lead the transformation of these ideas through the fabrication and installation process, which will also be done in partnership with Oliver and Brenda Kelley, the redevelopment manager at the City of Charlottesville.

“They did an excellent job, and most of them had never done anything like this before,” Oliver said. “I was just so happy for them, so proud of them and just thankful for them. I can’t wait to see what happens.” 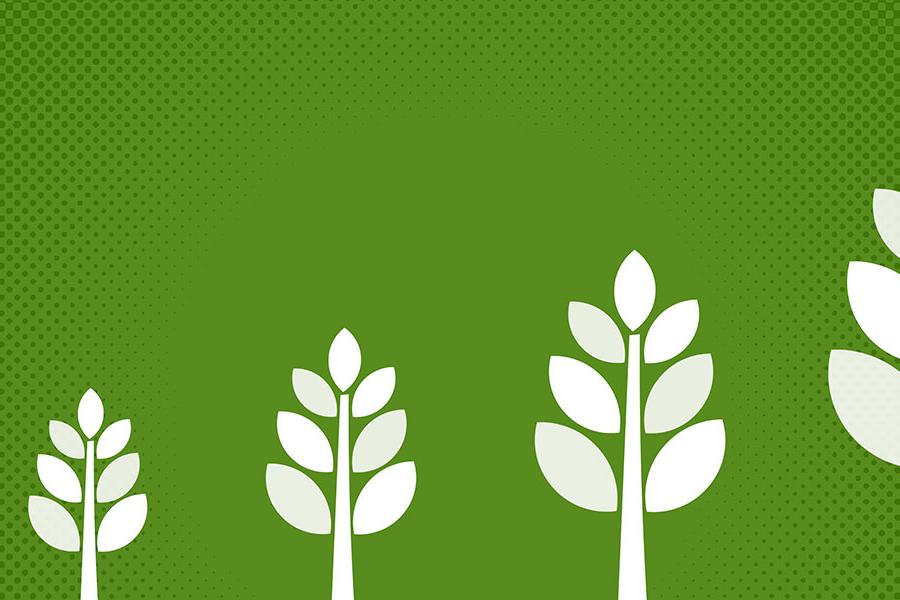 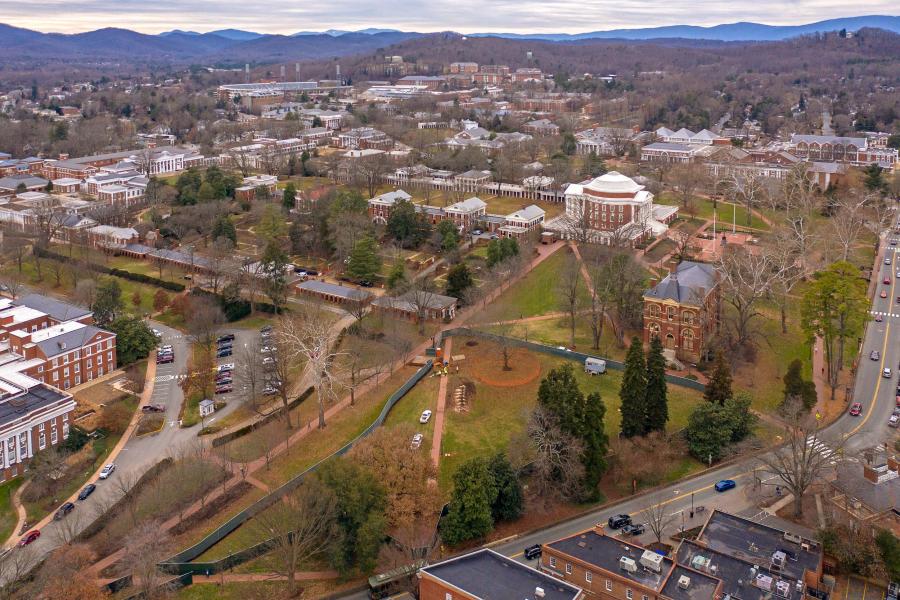 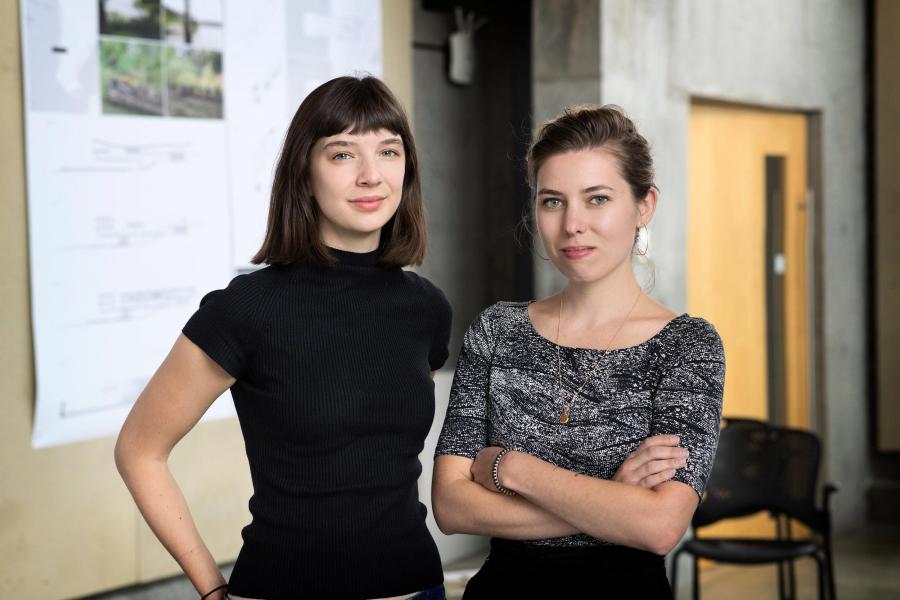