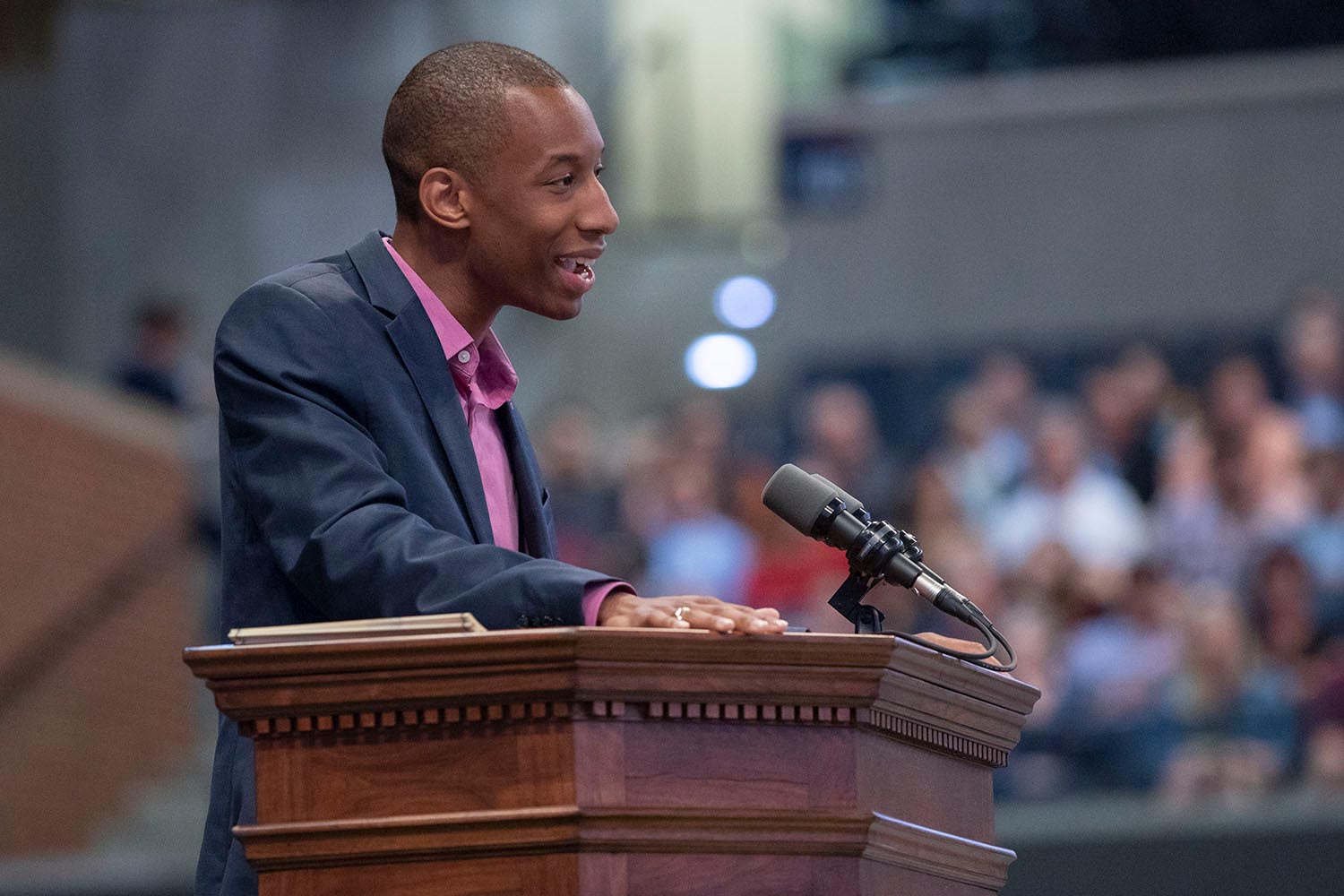 Football champion and activist Chris Long had just finished his address to the University of Virginia’s Class of 2018 at Friday’s Valedictory Exercises. Audience members began gathering their things and were preparing to leave when their ears perked up. At the lectern stood the president of the Class of 2018, Malcolm Stewart.

The story he shared that afternoon was captivating. In the estimation of one administrator, who has been to every Final Exercises weekend for the past 28 years, it was one of the most stirring student addresses she has heard.

For nearly 12 minutes, Stewart unspooled his story about family and home, paying homage to his mother, who died of breast cancer in 2015, and to his family at UVA, the Class of 2018.

Family, he said, “means so much more than the conventional meaning of the people who have raised you and brought you up in life.” Stewart said that lesson was driven home the July afternoon that he sat in a pew at his mother’s funeral. She had died after four rounds of chemotherapy and the diagnosis of a rare form of breast cancer that strikes African-American women and has no cure.

“I looked up in the pew at the funeral and saw the orientation leaders that I had been working with all summer,” he recalled. “They had never met my mom; they had never met my family; and their only connection to coming down there was because of how they had gotten to know me.

“And what I learned in that moment is that although there is a seat that will forever sit empty in my family, it is also joined by a hundredfold seats for all of you that I would now equally call my family.”

The remarks were delivered without a teleprompter or notes, which made people wonder how Stewart was able to deliver such a deeply personal and emotional story seemingly off the cuff. Stewart, who majored in leadership and public policy and minored in social entrepreneurship, discussed his speech with UVA Today minutes after moving out of his Lawn room and before heading to Nepal for the summer.

Q. Did you prepare your remarks or did you come up with them on the spot?

A. One of my high school friends gave me really good advice. She said, “Don’t ever memorize a speech, because when you get up there you always try to do it exactly how you wrote it and when you get it wrong, you’ll backtrack, and say ‘um’ and get confused and lose yourself. When you do all that, you lose the audience.”

She said, “Instead of writing out every word of your speech, write out five or six of your main points. Know what those points are. Know what order it is you want to hit them. Instead of memorizing and reciting the speech, go through it multiple times repeatedly and you are good to go.” 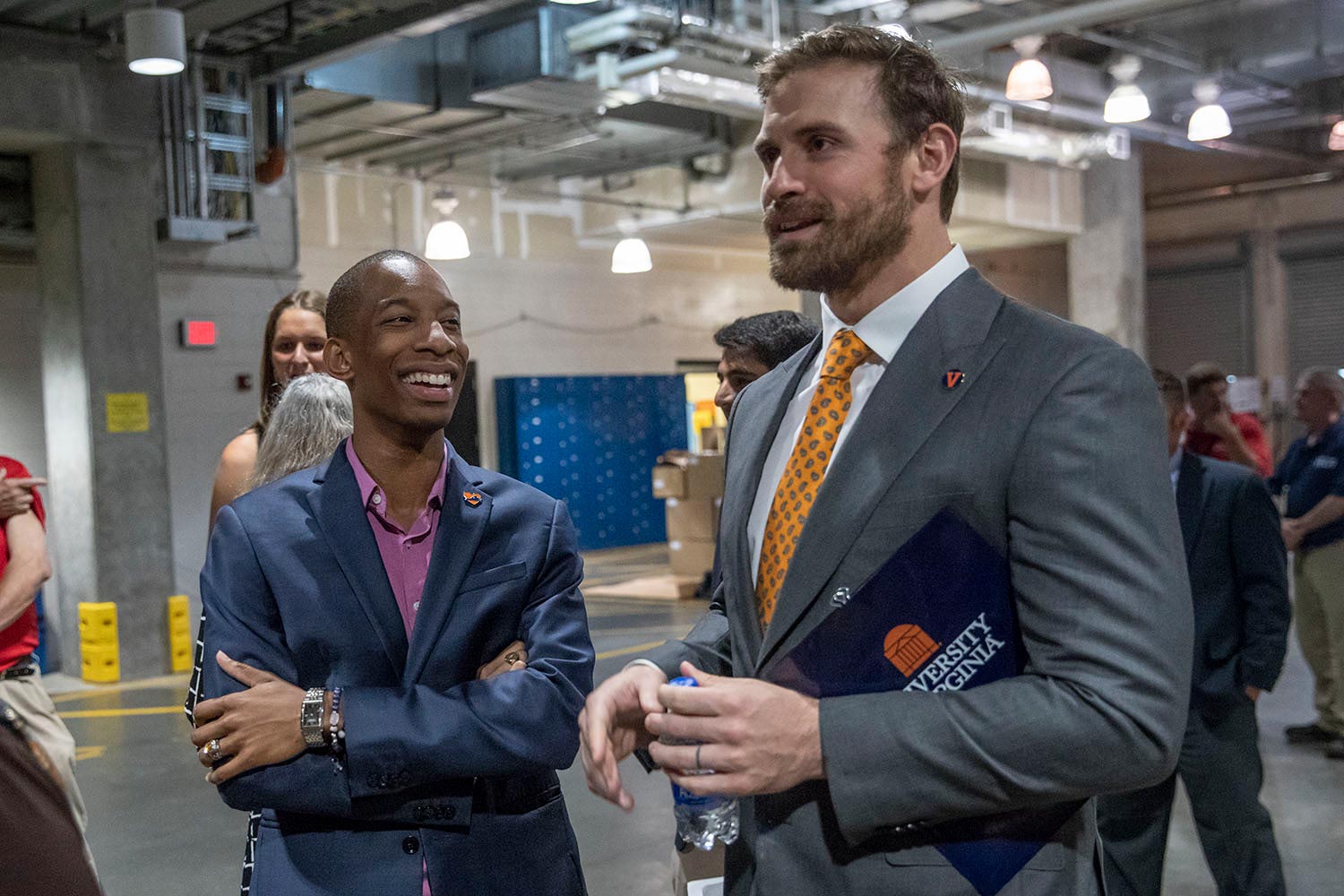 With UVA, I had to hand in a written speech, so I read it aloud, recorded myself saying it and then I transcribed what I said. I planned on having the speech with me just in case. I printed it out, but took it out of my back pocket and put in the chair I wanted my dad to sit in in the front row. I didn’t grab it off the chair.

Q. What sorts of reactions to the speech have you heard from people?

A. At the end of the day, no speech is perfect and no speaker is perfect. I use that as a good opportunity to find out what I can do better next time. Pam Higgins, who works in the Office of Major Events, came up to me and [Class of 2018 Vice President] Diane D’Costa at the graduation ceremony Saturday after we brought the flags down. She came over to us and said, “In my 28 years of Valedictory Exercises, that was one of the best.” 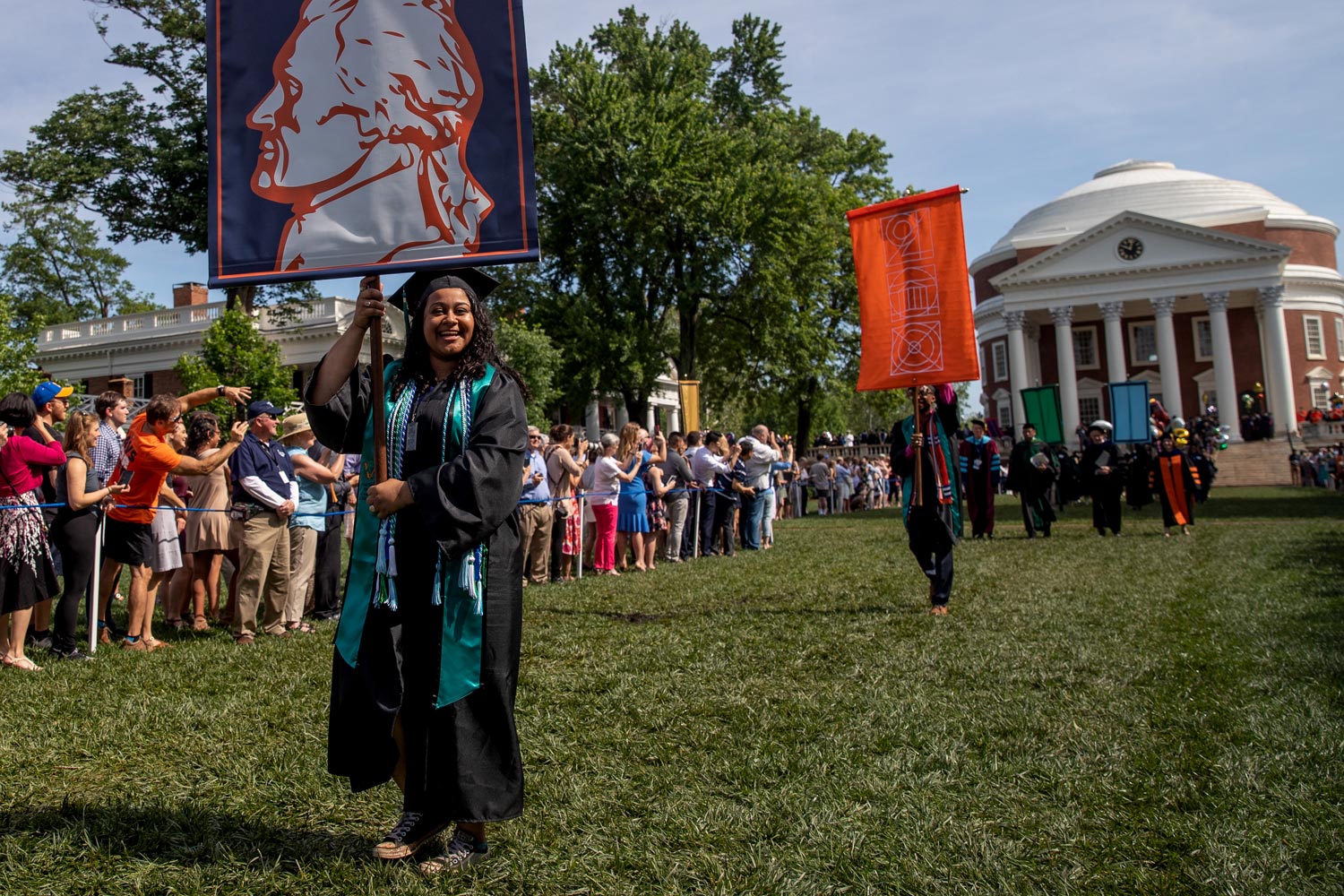 Q. You’ve been working with University Communications since 2016 and created a lot of content. Do you have any favorite pieces?

A. I think my favorite, and this is biased because it’s fresh, is my speech.

My junior year I started talking more about my mom and what that meant to me and how I overcame that. I started realizing that by sharing it, it could mean a lot to other people. One of the things I have identified as one of UVA’s biggest flaws, as far as students, is everyone feels they have to be invincible all the time and are not allowed to show emotion. I’ve always been looking for a large venue to be able to share this story so that I could hopefully help to change that culture. In sharing that, I want to be able to inspire more people to be open and vulnerable about things that are important to them. The fact that the video is getting thousands of views means a lot to me.

Q. How did you feel up there on stage?

A. I felt a lot of things. Although people say it didn’t show, I was very nervous. But my nerves are funny. They never show in my upper body or in my face but they show below my knees, so at the knees down, I am buckling and shaking and the podium hides it all. My upper body, I look like I have it together, which is so funny to me. 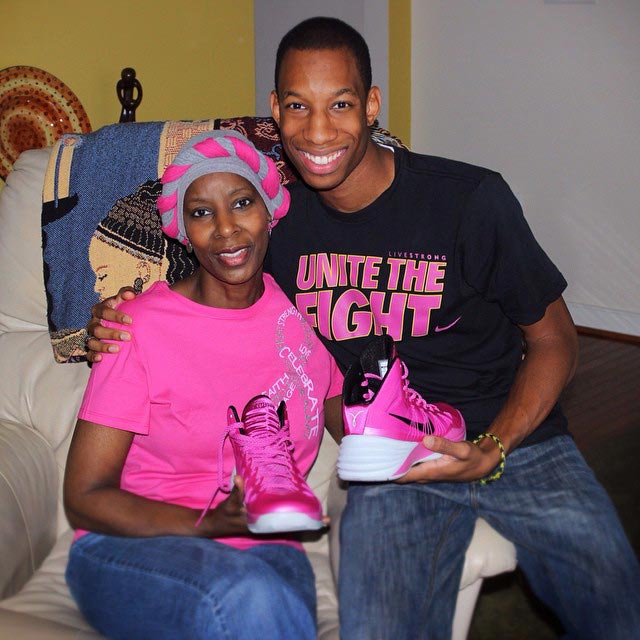 I definitely felt very, very close to my mom in the moment of being up there. There was a point where I talked about how there was that empty seat. It was ironic that there was a seat there that my aunt had saved for my mother. I didn’t expect her to do that. But it meant a lot to me. And when I saw it, it was kind of an out-of-body experience. I felt like that was the best way to drive home that point about family.

Q. What is next for you?

A. I’m going traveling this summer to Nepal as kind of a de-stressor. Josh [Jaspers, a fellow member of the Class of 2018] and I will also research ideas for a possible new UVA J-term [course]. We will hike to the base camp of Mount Everest and meet with different community leaders and learn more about global development efforts in Nepal.

In August I am moving to California. I will be working as a media and communications analyst at Makena Capital Management in Palo Alto. I got the job because of my job working in University Communications. The person who offered me the job told me the company was not doing a lot of marketing. He saw the Valencia video I had done for UVA Today and said, “This is so cool.’ The idea hit him: “We should do more and revamp our website and multimedia presence. Malcolm could be the guy to lead that charge.”

For All of Us END_OF_DOCUMENT_TOKEN_TO_BE_REPLACED