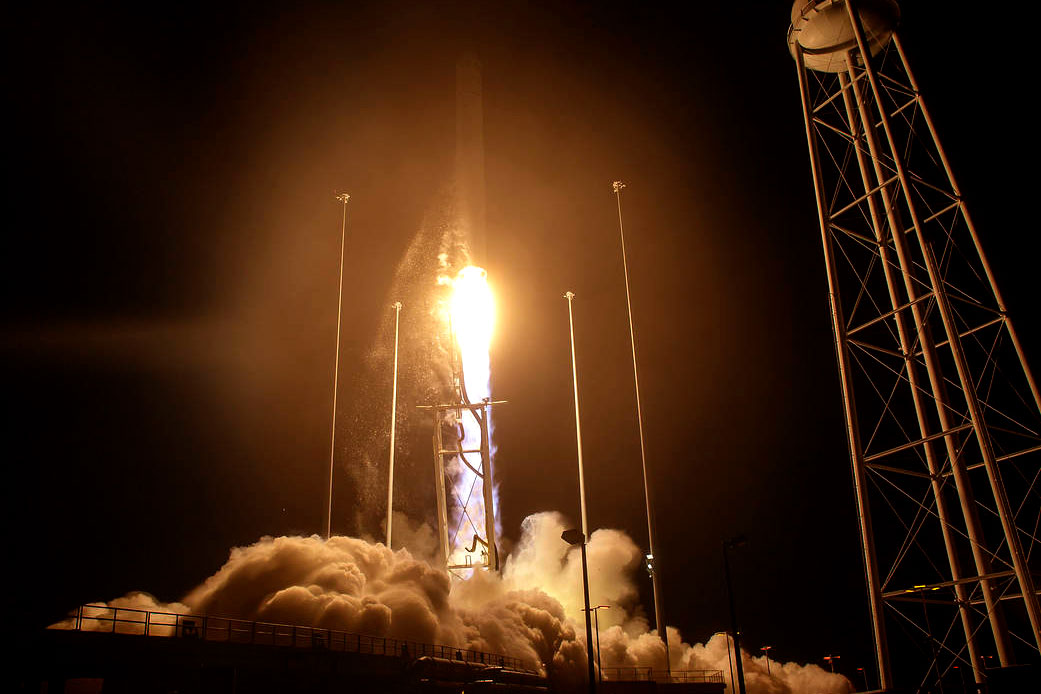 As the commercial rocket lifted off from the Mid-Atlantic Regional Spaceport on Wallops Island, Virginia, on Oct. 17 – lighting up both the evening sky across the Eastern Seaboard and the social media world – two 2015 graduates of the University of Virginia Darden School of Business’ Executive MBA program watched anxiously and then in jubilation at the successful culmination of years of work.

Their relationship began more than three years earlier at Darden.

On the first day of the 2013-14 academic year, Sean Mulligan, the director of the Mid-Atlantic Regional Spaceport, was participating in a meet-and-greet exercise with his fellow executive MBA students, and prepared to share the “fun fact” of the time he helped launch a rocket to the moon.

His thunder was stolen, however, when classmate Kevin Ertmer, a manager in a key rocket program at Orbital ATK, went first and shared a remarkably similar story.

“We hadn’t met before, but we had a lot to talk about right after that,” Mulligan said.

Unbeknownst to each other, the Executive MBA Class of 2015 included not one, but two engineers with deep connections to Virginia’s space industry. The pair realized they shared a web of professional connections and personal interests, with both playing key roles in the launch of rockets intended to resupply the International Space Station.

For Ertmer, Mulligan and their teams, the October launch of Orbital’s Antares rocket was the culmination of years of work and critical validation of the commercial space industry.

Ertmer and Mulligan came to the space industry – and Darden – from different paths, but with similar goals. Ertmer studied aerospace engineering in college before joining the U.S. Air Force, and for a period had designs on becoming an astronaut.

As he progressed in engineering roles at the aerospace manufacturer Orbital ATK, Ertmer said he saw firsthand the benefit that honing his management skills could provide.

“Aerospace can be very siloed in terms of engineering versus executive management, and there is a clear need to have the kind of skills that are taught at Darden, in particular,” he said. “You clearly need to have those management skills and leadership skills at a much lower level in an organization. Across the board, those kinds of skills are important for mid-level management, and I just took it upon myself to make that happen.”

Meanwhile, Mulligan, who has a chemical engineering background, was hired at the spaceport in 2009 as the first engineer to help design and build a new launch pad for Orbital’s Antares rocket at Wallops Island. After completing construction and commissioning, he oversaw the first launch from the new pad in 2013.

When he was promoted to the director role in 2012, Mulligan knew he wanted to acquire the finance and leadership skills taught in an MBA program to complement his engineering background, and he set his sights on Darden.

“It was important for me to go to a top-tier school,” Mulligan said. “If I was going to put all this effort in, I wanted it to have real value – because it’s not an easy drive back and forth between Wallops Island and Charlottesville.”

Both Mulligan and Ertmer credit the executive MBA program with enabling significant professional growth, and with helping them each land promotions. Mulligan has added the title of COO at the Virginia Commercial Space Flight Authority, also known as Virginia Space, which owns and operates the Mid-Atlantic Regional Spaceport. Ertmer moved into his position of manager of the systems engineering and test group for the Antares rocket program.

There was even more at stake than usual in October as the engineers moved forward with the launch to deliver supplies to the space station.

One year earlier, an Orbital Antares rocket bound for the space station exploded shortly after takeoff – a devastating setback to the commercial space industry that required a partial rebuild of the spaceport’s launch pad and caused Orbital to accelerate the adoption of new engines for an upgraded version of the rocket.

Ertmer and Mulligan have difficulty summarizing the experience of watching the culmination of the year-long rebuild and return to flight process.

“There are no words,” Ertmer said. “I can just describe the feeling, which is basically shaking while watching it.”

Said Mulligan: “You watch it take off and it’s unreal. It’s one of the best feelings in the world.”

Although the launch carried immense importance for Orbital and the space industry in Virginia, the fact that the clearly visible rocket lit up social media and captivated so many added to the delight.

Ertmer said he suffered a flat tire leaving the rural launch area, and the Orbital ATK shirt he wore to the service station sparked much congratulatory conversation from the employees, all of whom had watched the takeoff.

“They were so happy because they knew how much the program had brought to the area,” Ertmer said. “So they understood how important the successful launch was – and they got a good show.”

“The effect it has on kids and [science, technology, engineering and math education] and stuff like that, you can’t compare – it’s so easy to get people excited about science and engineering when it involves launching rockets,” said Mulligan, adding that a future program between Virginia Space and Orbital ATK will target students and involve the inclusion of dozens of Rubik’s Cube-sized satellites known as PocketQubes. The tiny satellites will be sent to orbit on the second stage of the Antares rocket and will provide students of all ages in Virginia and across the country an opportunity to perform science experiments in space.

With the successful launch under their belts, the pair are looking forward to establishing a steady cadence of successful launches, potentially providing entertainment for much of the East Coast as often as once every three months.

What’s Next for UVA’s Class of 2022? END_OF_DOCUMENT_TOKEN_TO_BE_REPLACED