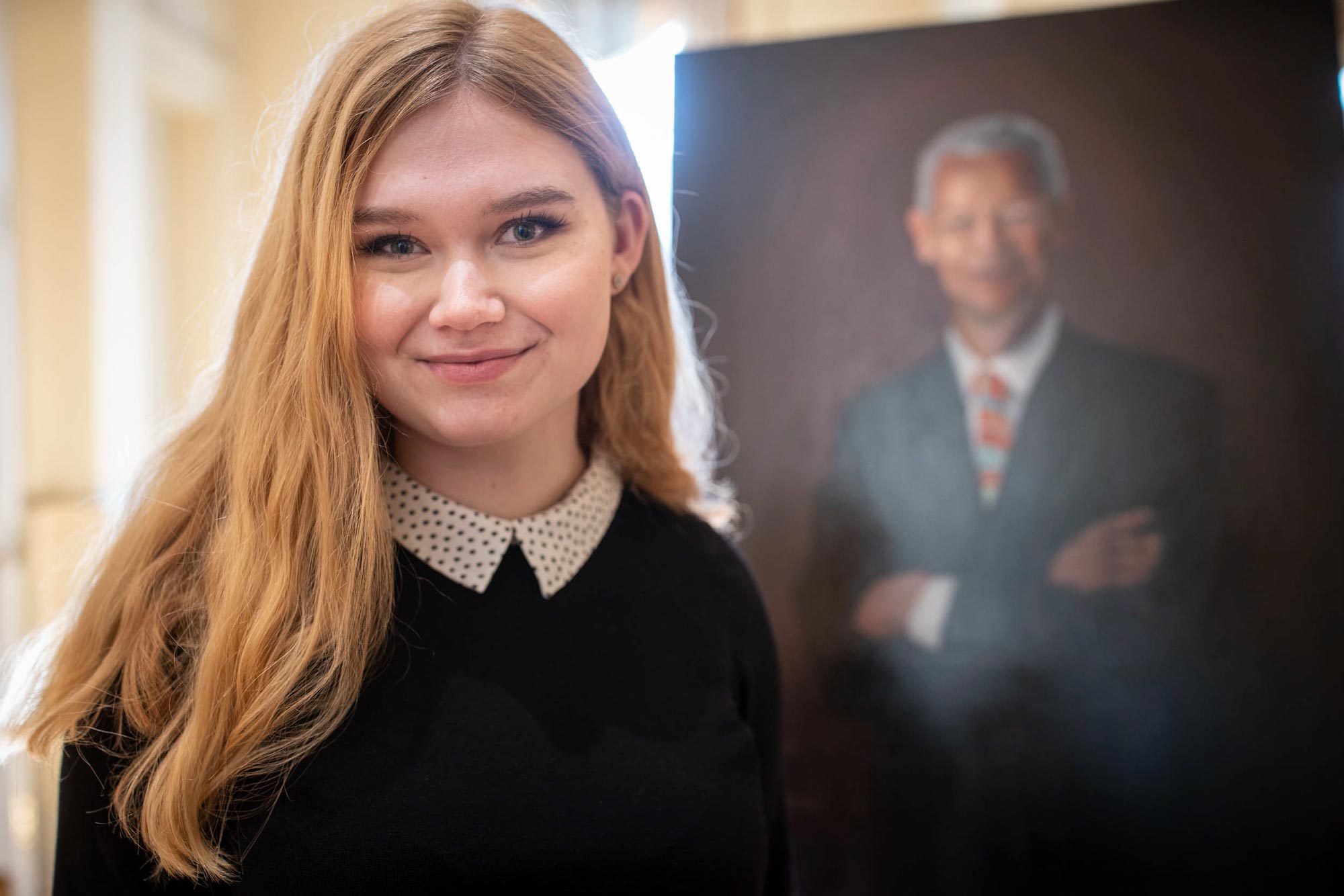 Sophia Kedzierski, a second-year student at the University of Virginia, walked into Madison Hall without an appointment last fall and asked if there was someone in the president’s office she could talk to about a painting she wanted to produce for the University.

She landed in the office of Matt Weber, senior assistant to President Jim Ryan, who listened to her idea: she wanted to paint a portrait of the late civil rights leader Julian Bond, who taught history at UVA for 20 years. Would the president’s office be interested in displaying the painting that she would donate to UVA?

She hardly believed anything would come of it, but Weber “was wonderful – excited and encouraging – even before he saw my portfolio,” said Kedzierski, a second-year English major from Clarke County, near Winchester. The next day she emailed the president’s office some examples of her work and a proposal for the Bond project.

Her painting is the first new portrait to reflect Ryan’s initiatives – announced Thursday – to update and contextualize the University’s historic landscape with commemorative markers, portraits and photographs, as well as new digital tours.

One of the ongoing project’s aims is to recognize student leaders, faculty and staff members, and administrators who have broken down racial, gender and social barriers at UVA and worked to make the University more inclusive and welcoming. 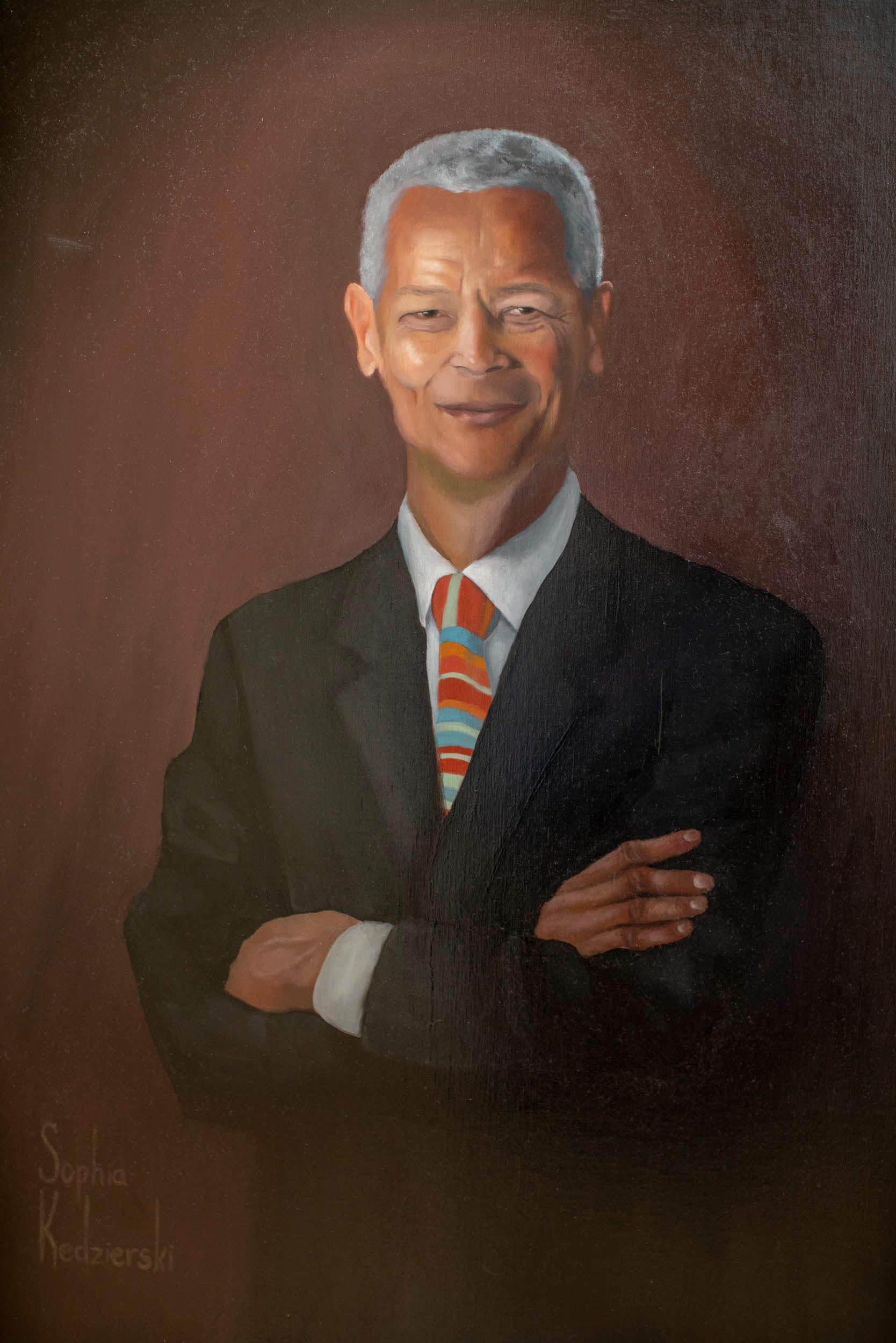 Impressed with Ryan’s plan for a “both great and good university,” she wanted to find her own way of contributing, she said.

Last spring, Kedzierski and her three roommates applied for housing in the Brandon Avenue apartment complex and later found out they had a place in a new student apartment building, called Bond House.

Until she read a UVA Today article about the new building and the man for whom it was named, Kedzierski said she didn’t know about Bond’s work in the civil rights movement, let alone his distinguished time on Grounds.

“How incredible it was to learn about him and all he did here at UVA,” she said. She had learned about civil rights history on a more general level, she said, and about icons like Rosa Parks and Rev. Martin Luther King Jr., but didn’t know Bond accompanied them in the March on Washington in 1963, among the earliest of his lifelong social justice activities.

Bond, who died in 2015, joined UVA’s Corcoran Department of History in 1992 and retired from the University in 2012. More than 5,000 students attended his classes, where he drew on his firsthand knowledge of the civil rights movement and its participants to teach civil rights in the larger context of American history.

One of the co-founders of the Student Nonviolent Coordinating Committee, Bond had several careers before and while teaching at UVA. He served in the Georgia House of Representatives, co-founded the Southern Poverty Law Center and chaired the NAACP, among other positions.

At UVA, Bond also co-directed the University’s “Explorations in Black Leadership” oral history project, bringing dozens of African American leaders to Grounds for public lectures and private interviews. For many years, he led a Civil Rights South Seminar, a popular annual tour for alumni, parents and friends to visit landmark sites from the civil rights movement.

Kedzierski did not approach the president’s office on a whim.

She had thought seriously about making this portrait and discussed it with one of her professors, Lisa Shutt, from whom she was taking an African American studies course, “Black Femininities and Masculinities in the U.S. Media,” last year.

“We talked about the importance of individual activism, that it’s not ‘one size fits all,’” Kedzierski said.

They agreed her idea of painting Bond fit with Ryan’s goals for the University and seemed “appropriate and timely.” So she began working on the painting while in her apartment in Bond House, she said.

Although she hasn’t chosen to major in studio art, Kedzierski has loved being artistic since she was a child, she said. She knew she wanted to keep painting, something she began doing in earnest throughout her high school years, even being commissioned to paint portraits a few times. And she’s also pursuing her interest by taking art history classes.

A couple of weeks ago, Kedzierski delivered the portrait, a 30-inch by 40-inch oil painting of Bond, a composite image created from several photos of him. Ryan interrupted a meeting in his office to invite her to come in and show the painting, which everyone welcomed and complimented.

“I’m grateful for the time, effort and passion that Sophia put into this painting,” Ryan said. “I appreciate her donating this to the University so that others can view her work and reflect on Julian Bond’s life and legacy.”

The portrait of Bond soon will be displayed in the building named after him.

It’s Copperhead Season in Virginia. Here Is What You Need to Know END_OF_DOCUMENT_TOKEN_TO_BE_REPLACED

What’s Next for UVA’s Class of 2022? END_OF_DOCUMENT_TOKEN_TO_BE_REPLACED