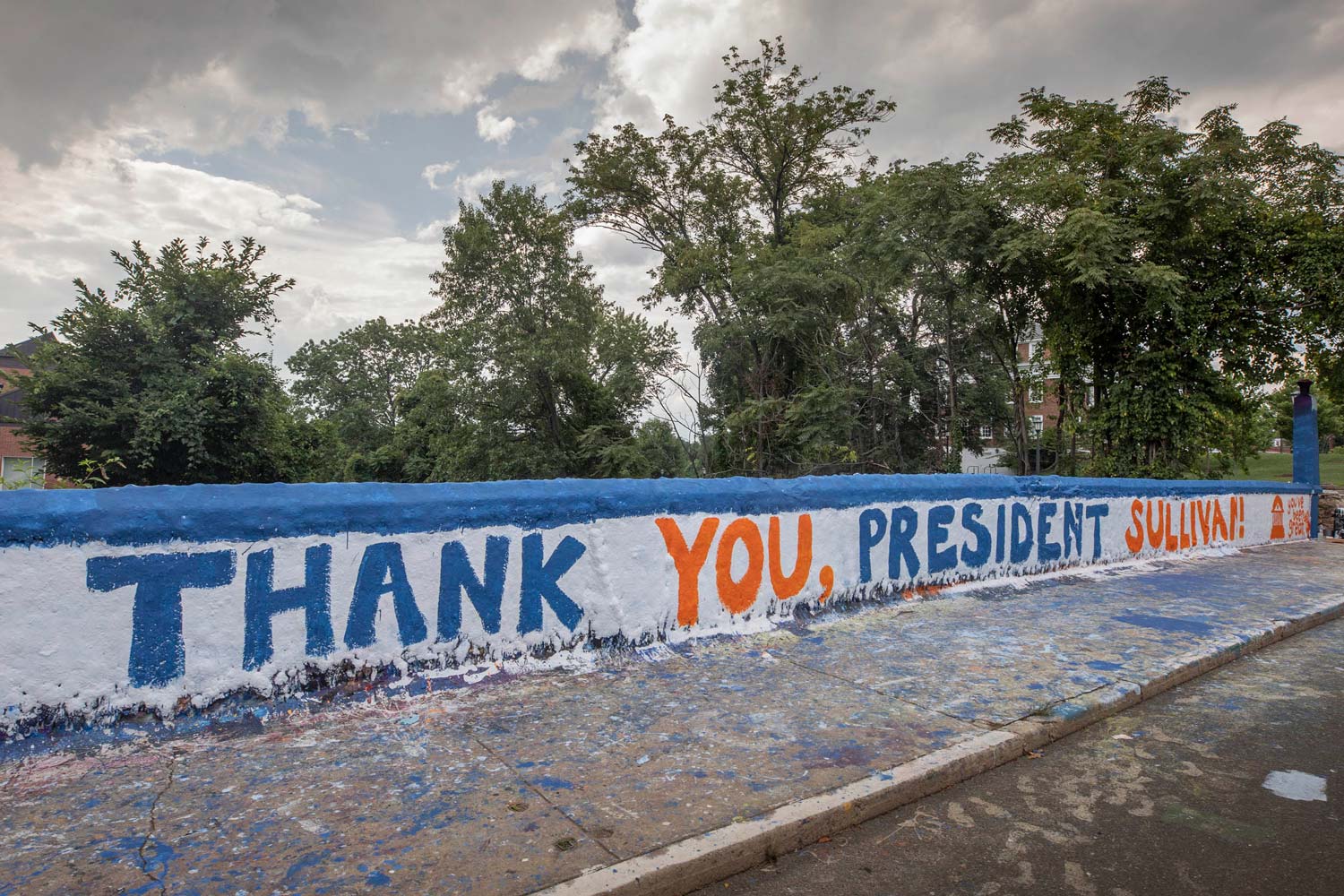 In President Teresa A. Sullivan’s first speech to incoming University of Virginia students at Opening Convocation in 2010, she invited the first-year scholars to join her with these words: “Let’s work hard!”

If her Outlook calendar is any indication, she is doing just that – down to the very last minutes of her presidency, which officially ends at midnight.

Today, Sullivan holds her final full cabinet meeting and will have a lunch meeting with her successor, James E. Ryan, who takes office as UVA’s ninth president on Wednesday.

On Monday, she held an exit interview with the Cavalier Daily, UVA’s student newspaper. She also visited a women’s basketball practice in John Paul Jones Arena. 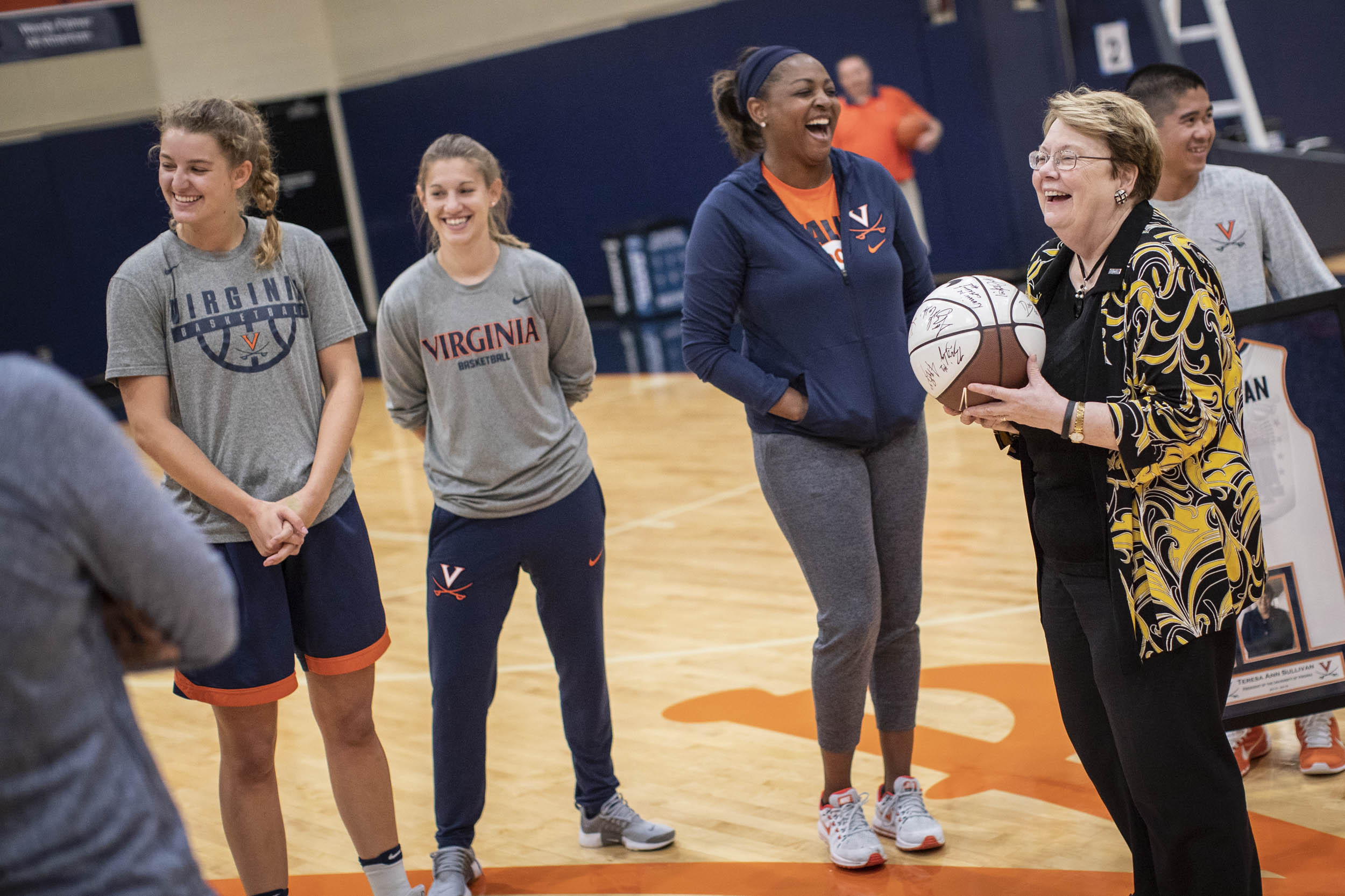 President Teresa Sullivan made good on a promise to Athletic Director Carla Williams on Monday, the eve of her last day in office, when she observed a women&#039;s basketball practice. (Photo by Sanjay Suchak, University Communications)

Last week, Sullivan participated in Association of American Universities board meetings and held one-on-one meetings with her vice presidents.

“President Sullivan has kept a full schedule of commitments throughout the summer, working to advance UVA’s priorities with the same levels of energy and enthusiasm that she has demonstrated every single day of her presidency,” said her chief of staff, Jonathan Bowen. “Considering the dedication and remarkable stamina that have been hallmarks of her leadership, it’s no surprise that she will continue working hard until the end of the day.”

Sullivan’s presidency is the subject of a booklet, “The Sullivan Years at UVA: August 2010 to August 2018,” that outlines key accomplishments in major areas of the University over the past eight years. It illuminates her work building faculty excellence, enhancing the student experience, elevating the Health System and overseeing the celebration of UVA’s bicentennial, among other things. (For regular updates to the information in this piece, please visit president.virginia.edu/history/sullivan.)

Sullivan planned and executed these improvements in collaboration with the Board of Visitors, vice presidents, deans of the University’s 11 schools and faculty representatives. As she told the board in 2012, “Corporate-style, top-down leadership does not work in a great university. Sustained change with buy-in does work.”

On another occasion, she described her vision to the board this way: “We continuously improve the University, one faculty appointment at a time; one cost-saving measure at a time; one new initiative, project, or decision at a time. And the effect is cumulative.”

Over the last year, the University has hosted several gatherings to salute Sullivan, affectionately referred to as “T-Sully” by students. In May, faculty, students and staff turned out for a sun-splashed picnic to celebrate the outgoing president, and the Board of Visitors hailed her at a Dome Room dinner. The University also produced a video to thank Sullivan for her leadership.

In her farewell letter to alumni in Virginia Magazine, “Reflections on Our University,” Sullivan looked back on her years of collaboration with alumni, faculty, staff, students and parents and expressed gratitude for the support she has received during her tenure.

“My final words, in this final column, in the final months of my presidency, are thank you,” she writes. “For your steadfast support over the years, for your many acts of kindness and friendship, and for your commitment to the University that we cherish so dearly, I will always remain grateful.”

After moving out of Madison Hall, Sullivan and her husband, law professor Douglas Laycock, will take up a temporary stay in Texas on research leave. Laycock is scheduled to visit at the University of Texas School of Law beginning in 2019. Sullivan, a sociologist by training, plans to conduct research to prepare for a return to UVA for her classroom passion, teaching demography. 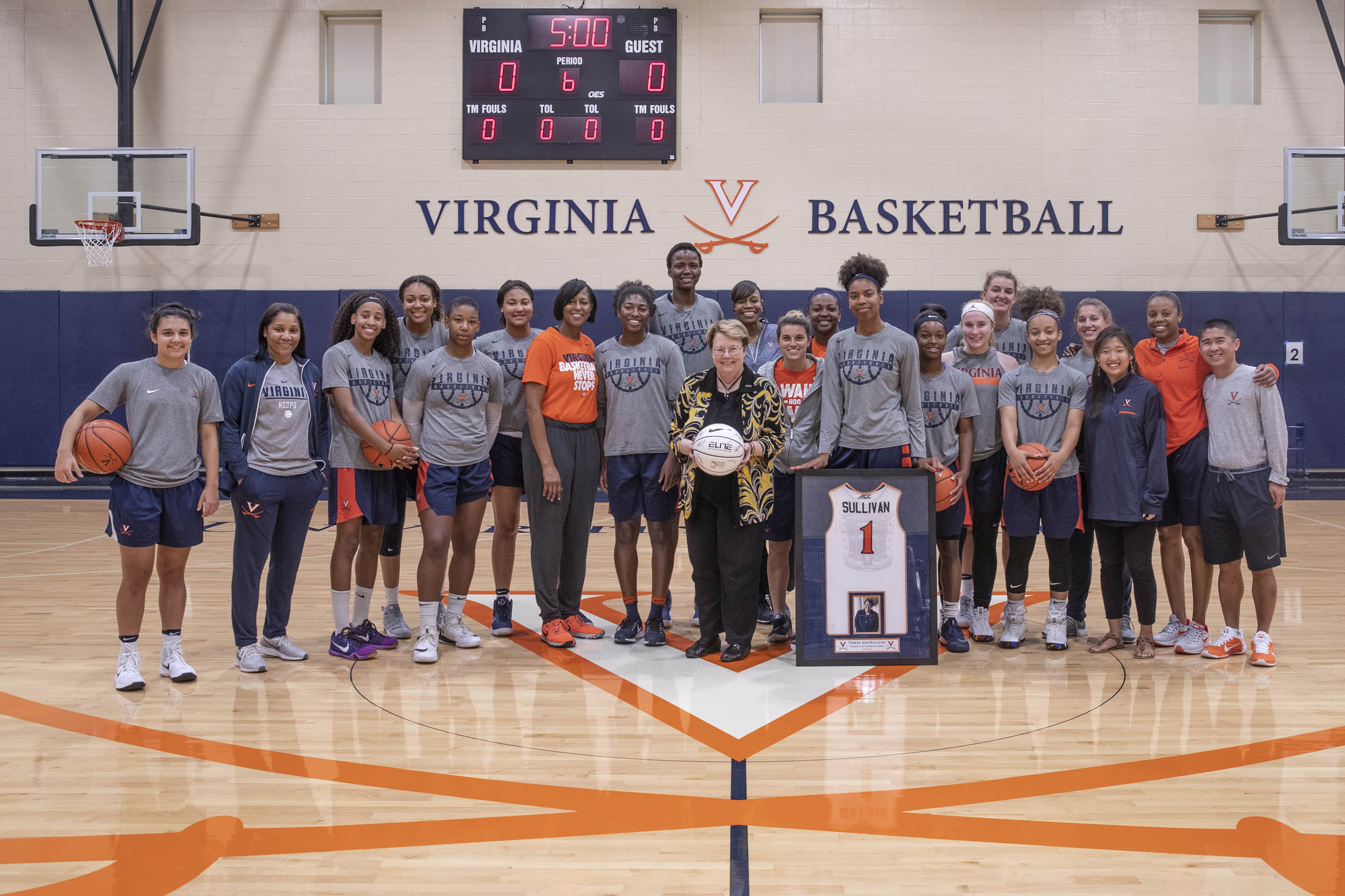 “It has been a privilege and an honor to serve UVA, its students, patients and employees, over the past eight years,” Sullivan said. “I will always be grateful for the opportunity I’ve had to meet so many talented students and to work with superb faculty and staff. Together, we have built a strong foundation for UVA to flourish in its third century.

“I wish Jim Ryan and his team the best as he begins his presidency.”

At UVA, There Is a Club for Everyone END_OF_DOCUMENT_TOKEN_TO_BE_REPLACED