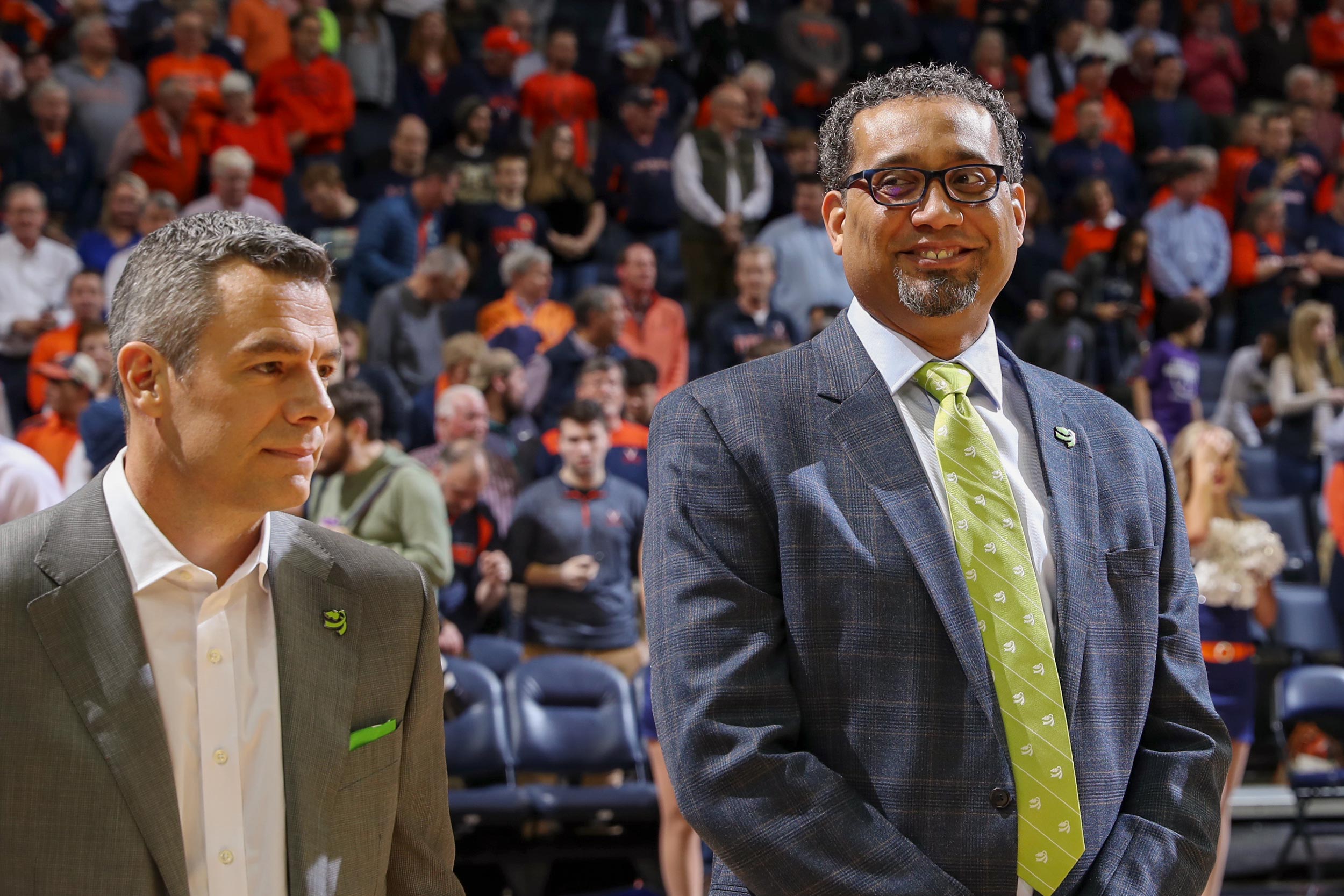 When he played, UVA assistant coach Jason Williford, right, says he didn’t have to worry about many of the distractions that today’s players do. (Photo by Matt Riley, UVA Athletics)

Hanging on the wall in Jason Williford’s office at John Paul Jones Arena is a framed poster of himself, Cory Alexander, Junior Burrough and other former University of Virginia basketball teammates sitting in a library.

The players are wearing prop glasses and making shush gestures toward the camera – as if their studying has been disturbed.

The caption on the poster – produced by the athletic department’s marketing folks at the time – reads, “A Quiet Success.”

As a team captain during the 1994-95 season, Williford helped lead the ’Hoos to the NCAA Tournament’s Elite Eight.

Now on the cusp of another Elite Eight, UVA Today caught up with associate head coach Williford, a member of head coach Tony Bennett’s staff for the last 10 years, for his perspective on being a UVA student-athlete, blocking out the noise of March Madness and how the University shaped him.

Q. A lot of fans wonder, how do today’s student-athletes – particularly at a place like UVA where the academic demands are so great – get their work done with all the games and travel during March Madness?

A. We get kids who are pretty conscientious about doing well both in the classroom and on the floor. When we travel, we have study hall, and T.J. Grams, our academic adviser, does a tremendous job of making sure they understand that you have to get your work done, too.

I think the professors here at UVA understand what it’s like to be a student-athlete for the most part – and our guys don’t take advantage of that and don’t abuse that privilege. They’re going to office hours and meeting with tutors if need be, and they’re putting in the extra work if they need to submit something. It’s demanding, but it can be done.

Q. How has being a student-athlete changed since your time as one?

A. I don’t think much has changed. I think those same demands were there when we were in school. Not everyone excelled in the classroom, but we were able to graduate. When I played, Coach [Jeff] Jones did a good job of getting kids who were conscientious and understood what the total Virginia experience was about – that it wasn’t just basketball; you were here to educate yourself.

Q. Having gone through the NCAA Tournament as a UVA player, what kind of advice do you give to your guys now about blocking out the noise of March Madness?

A. Unfortunately for these guys, they have to deal with the social media and everything that comes along with it. We didn’t have it back in those days – so there wasn’t that immediate attention that they get. They can look at their phones and people are tweeting at them and Instagramming them instantaneously.

The reality is they’re going to hear all kinds of noise. We talked about it at the beginning of the season, and how we just have to block out that noise and not listen to all the pundits who are talking. We know, because we witnessed it last year, that anything can happen. You’ve got to go play. And they’ve got to play and do what we’ve asked of them and keep the game simple and play Virginia basketball.

Q. From your days as a student, can you recall the professors who really had an impact on you?

A. I took Ed Ayers, who was a history professor [and later dean of the College of Arts & Sciences and president of the University of Richmond], and really enjoyed his class. Dr. Fred Diehl [current emeritus professor of biology] was a big supporter of the basketball program, whose class I also really enjoyed. And then [former psychology professor] Toni Wagner – she was my adviser. I majored in psychology. She helped hold my hand and get me through. I’m very thankful for what she did for me.

(Check out this article on current players’ most meaningful professors.)

Q. How did attending UVA shape your life?

A. I wouldn’t be where I am today without UVA. I met my wife here and now have two wonderful young boys, 12 and 9. I met lifelong friends – both basketball teammates and just regular students who, to this day, I’m still very friendly with.

Virginia is dear to the heart. I love this place. I owe a lot to UVA. I grew up here. I became a man here. I came in a young man and I left a man, and I owe that to all of those professors and definitely to my coach.