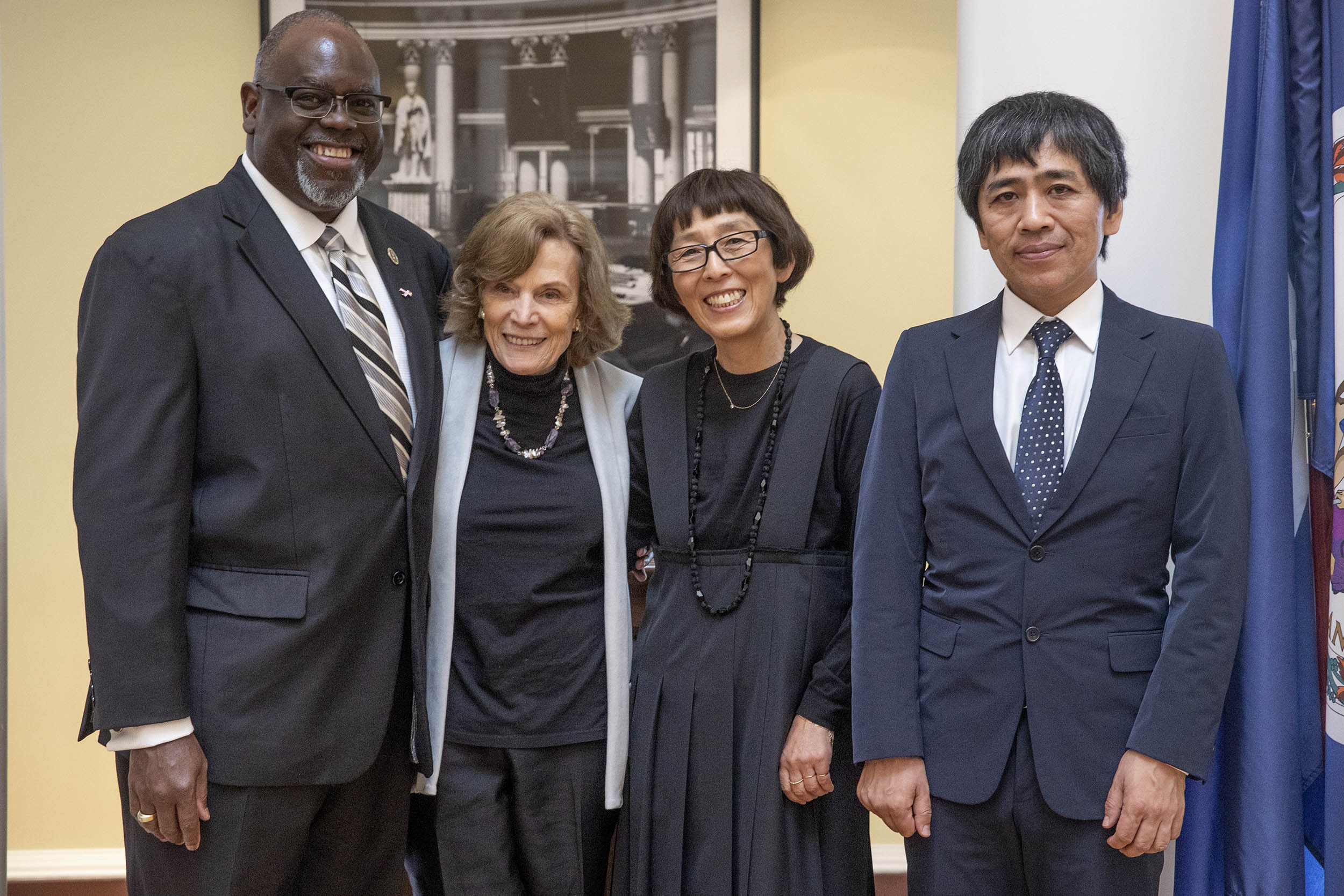 The University of Virginia marked Founder’s Day on Friday with the presentation of the Thomas Jefferson Foundation Medals, the University’s highest external honors, marking extraordinary achievement in fields Jefferson admired.

The medals were presented jointly by UVA and the Thomas Jefferson Foundation at Monticello during the annual Founder’s Day festivities commemorating Jefferson’s April 13 birthday; because the anniversary is on a Saturday this year, the official ceremonies were shifted to Friday.

UVA President Jim Ryan and Leslie Greene Bowman, president and CEO of the Thomas Jefferson Foundation at Monticello, presented the medals during a lunch in the Rotunda Dome Room. Each of the medalists also gave a public talk, recapped below.

Additional events included a public talk in Old Cabell Hall by historian John Ragosta on “Thomas Jefferson’s Contributions and Contradictions.” Ragosta, a historian at the Robert H. Smith International Center for Jefferson Studies at Monticello and a fellow at Virginia Humanities, discussed the Founding Father’s achievements and the contradictions inherent in his views of human freedom, given that he also owned enslaved laborers and supported the institution of slavery.

A few hours before that talk, Ryan and other members of the University community gathered near the Rotunda for a tree-planting ceremony honoring retiring UVA Vice President and Chief Officer for Diversity and Equity Dr. Marcus L. Martin. The annual Founder’s Day tree-planting celebrates an individual who has made significant and lasting contributions to the University community. 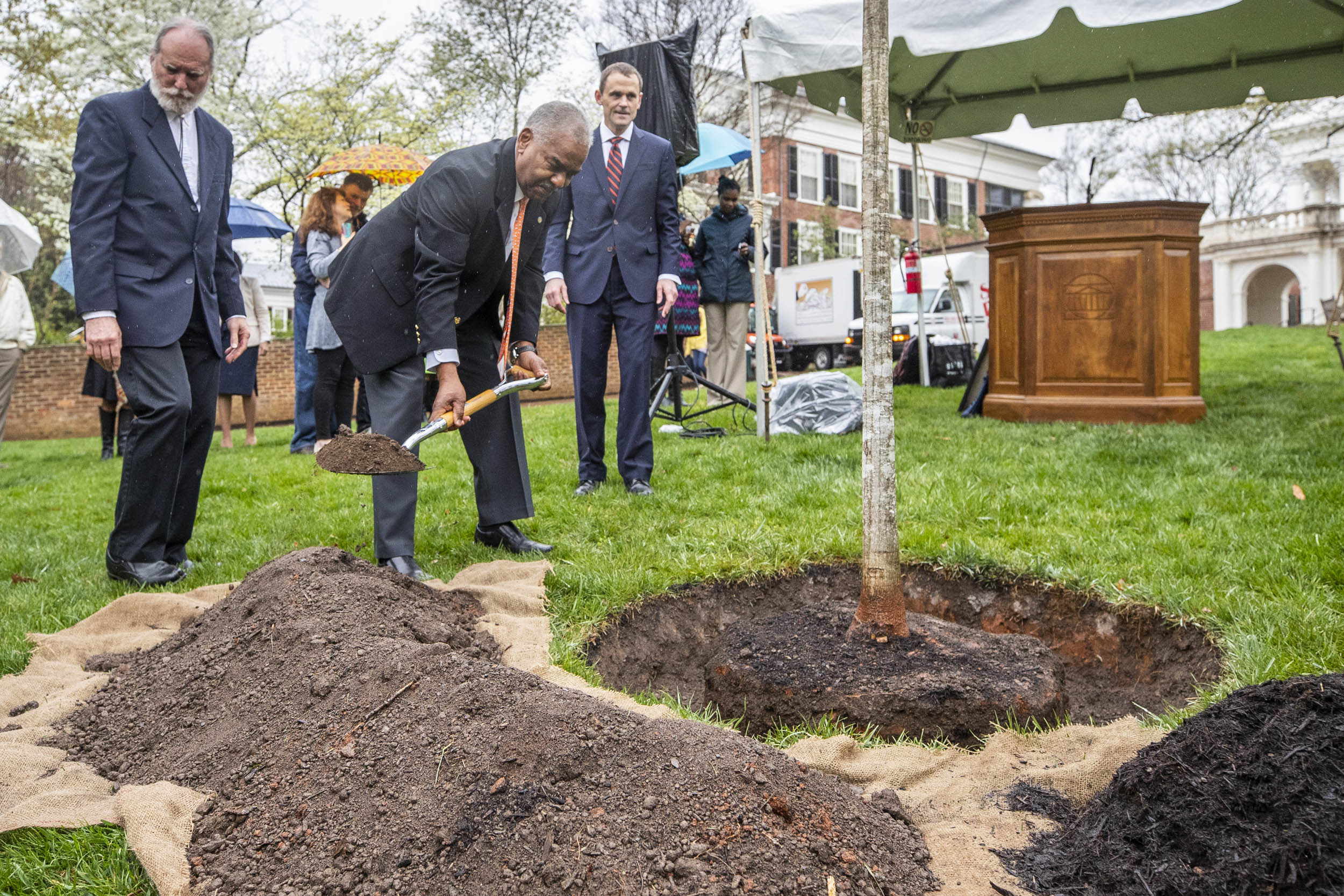 Martin, who began his career at UVA in 1996, has expanded the work of the Office for Diversity and Equity and introduced numerous efforts to promote diversity and inclusion, including committees and programs like the Disability Advocacy and Action Committee, the Lesbian, Gay, Bisexual and Transgender Committee, the Women’s Leadership Council, the annual Charlottesville Community Health Fair and the annual Community Martin Luther King Jr. Celebration. He also co-chaired the President’s Commission on Slavery and the University, established in 2013 to research and address the history of slavery at UVA.

In addition, Martin has served on boards and committees at several nonprofits in the Charlottesville community, and is the principal investigator for the National Science Foundation-funded VA-NC Alliance, promoting underrepresented students in STEM degrees. He also served as the founding vice president of the 100 Black Men of Central Virginia organization, whose goal is to close the achievement gap for African American males.

U.S. Judge Carlton W. Reeves, a 1989 graduate of the University of Virginia School of Law and this year’s recipient of the Thomas Jefferson Foundation Medal in Law, used his speech marking the occasion Thursday to make an appeal. 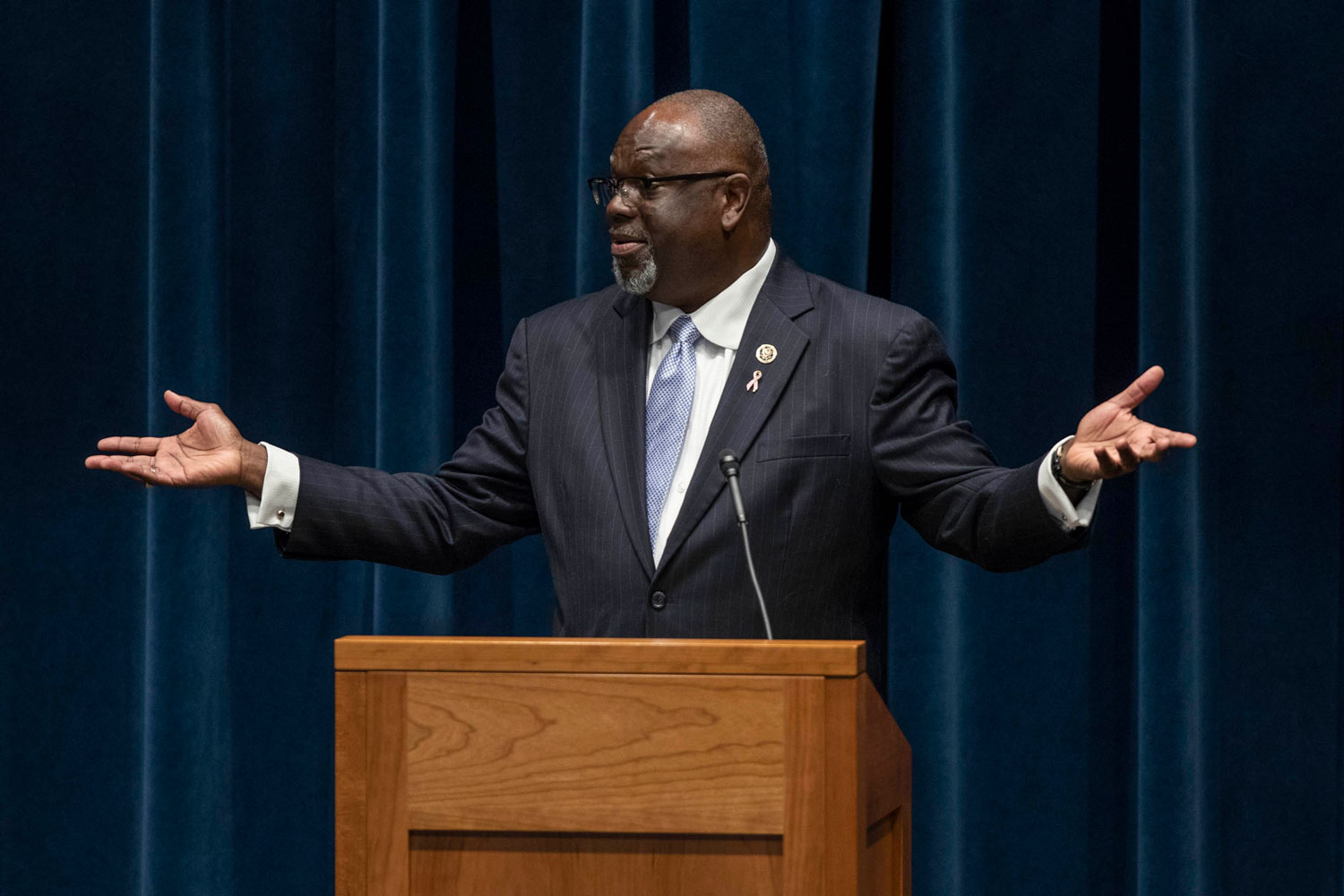 President Barack Obama appointed Reeves to the U.S. District Court of the Southern District of Mississippi in 2010, a time of historic gains for diversity on the bench. Reeves became the second African American appointed to a federal judgeship in the state. Other races and the LGBT community also witnessed breakthroughs in representation, he said.

“For a brief moment there were so many firsts, each one making our judiciary better reflect the best of America,” Reeves said. “I know, because I was there.”

But he said those gains have been under attack in a new period of pushback.

“The proof is in my mailbox, in the countless letters of hatred,” the judge said. He added, “The deliverers of hate, who send these messages, aim to bully and scare judges.”

Reeves said the current administration’s confirmed Article III judges – federal judges appointed for life by the president and confirmed by the Senate – have been 90 percent white, including only one black and two Hispanic judges.

In order to truly represent “we the people,” he said, “we need a judiciary as diverse as our country.”

He pointed out that past Republican administrations have made greater efforts to appoint diverse judges to the judiciary.

Reeves also questioned the current trend of political attacks on the judiciary – “when the executive branch calls our courts, in their words, ‘stupid,’ ‘horrible,’ ridiculous,’ ‘incompetent,’ ‘a laughingstock’ and ‘a complete and total disgrace’” – and the impact it has on public perception about judges’ ability to administer justice.

“Courts can and should be criticized,” Reeves said. “Judges get it wrong – all the time. That includes me. Scrutiny of our reasoning is not, on its own, troubling.”

But, he said, the “slander and falsehoods thrown at courts today are not those of a critic seeking to improve the judiciary’s search for truth. They are the words of an attacker, seeking to distort and twist that search toward falsehood.”

The judge has been an important voice for upholding the rights of minorities in Mississippi. In Campaign for Southern Equality v. Bryant, a same-sex marriage dispute, and Barber v. Bryant, Reeves ruled in favor of LGBT rights. In his hate-crime sentencing in United States v. Butler, a case that involved the racially motivated killing of an African American man, Reeves gave moving remarks on the related history of lynching in the state.

Reeves prefaced his appeal on behalf of the judiciary with a history of racial injustice in the U.S., mentioning both Mississippi and Virginia. He started with Thomas Jefferson, whom he noted as a singular thinker of his time who furthered ideals of equality, yet also an owner of slaves whose legacy “cannot be separated from an assault on the judiciary.” Reeves wondered what Jefferson might have thought of him receiving the award.

“I’m here today not just as a black man, but a black judge,” he said.

He concluded his history on racial justice in the civil rights era with Brown v. Board of Education, the U.S. Supreme Court decision that determined segregated schools to be unconstitutional. Reeves, a native of Yazoo City, Mississippi, was among the first children in that state to receive a desegregated education.

He said with each major stride for racial justice by “brave leaders, judges, plaintiffs,” white supremacy has mustered resistance, including through organized attacks on the courts.

“We are now eyewitnesses to the third great assault on our judiciary,” he said.

But Reeves said he has hope. Not just for racial justice, but justice on all fronts. For every hate-driven letter he receives, he said, he receives 10 others that are positive and appreciative.

Sylvia Earle: ‘We Have a Choice’

As rainy, gray clouds loomed over Monticello, Sylvia Earle – an oceanographer, explorer, author and lecturer named a “Living Legend” by the Library of Congress, and this year’s recipient of the Thomas Jefferson Foundation Medal in Citizen Leadership – gave her keynote address.

“I wish I could wish Thomas Jefferson a happy birthday,” she said. “I would like to imagine what he would think if he came back today, knowing what he knew about his world then and the world we live in now.” 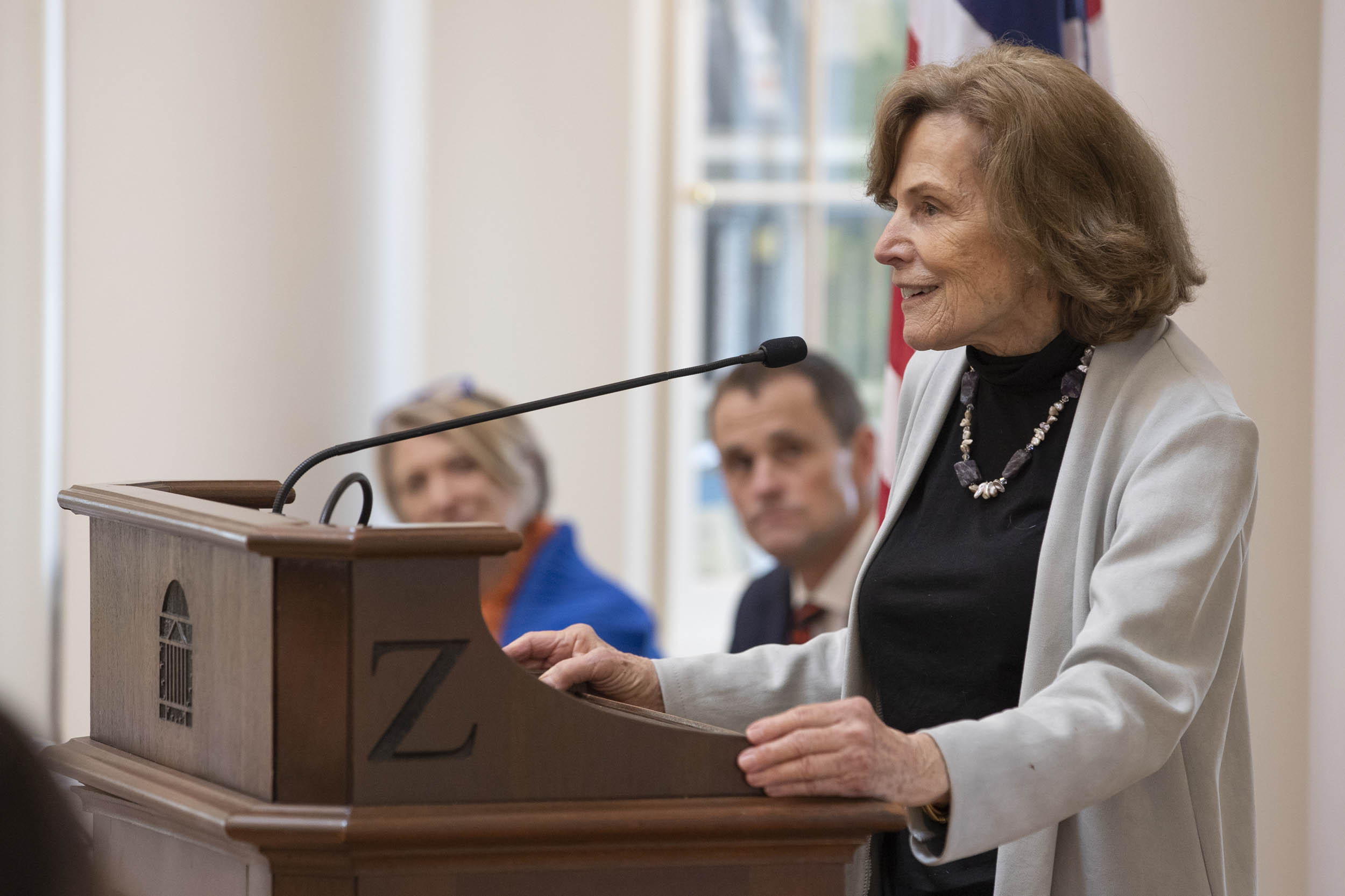 The Citizen Leadership Medal is bestowed by the Thomas Jefferson Foundation at Monticello and UVA’s Frank Batten School of Leadership and Public Policy.

A lifelong explorer and outspoken advocate for the protection and conservation of the world’s oceans, Earle embodies one of the attributes Jefferson admired – that of exploration.

“Jefferson understood the importance of exploration,” she said. “He knew we needed science-based evidence to better understand the natural world in order to foster prosperity.”

As the deleterious effects of climate change begin to reach a tangible dimension – one that can no longer be ignored – citizens such as Earle, who possess the deep knowledge and science yielded through decades of exploration, play a critical role in the planet’s future, she said.

“We are faced with a choice today,” Earle said. “We have the power to consume everything – and have so for centuries – but for the first time in our history, we are faced with the repercussions of that behavior.”

Earle pointed out how the passenger pigeons that once outnumbered people in the 19th century became extinct in 1914, and that the bison that Lewis and Clark encountered on the Great Plains – once a symbol of the unspoiled American West – nearly vanished at one time.

As someone who championed the importance of exploration, Earle was convinced that Jefferson would share her same concern for the ocean – the plight of its sharks, bluefin tuna, whales and coral reefs. He would understand what was at stake and feel compelled to act, knowing that the natural world in all its abundance had allowed this nation and the world to prosper and to advance.

“I think it would be obvious to [Jefferson], as it should be to everybody, we have to take care of the natural world that makes our existence possible now that we know what we could not know even 50 years ago,’ she said.

Kazuyo Sejima and Ryue Nishizawa Share the Philosophies Behind Their Memorable, Minimalist Designs

Japanese architects Kazuyo Sejima and Ryue Nishizawa took a large UVA audience through some highlights of their portfolio Friday afternoon, shedding light on the philosophies and influences that inform the sleek, minimalist buildings they have designed around the world. 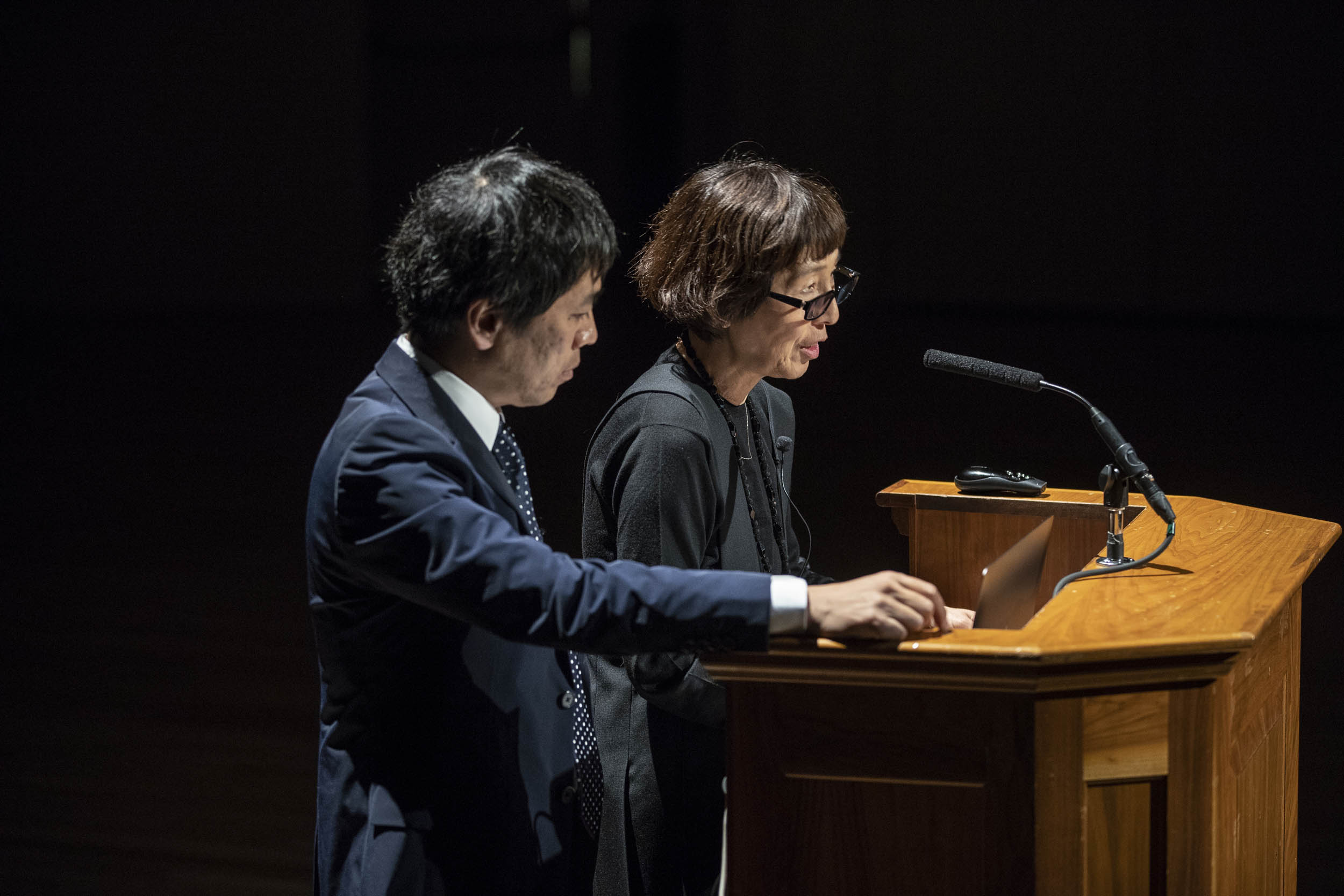 Sejima and Nishizawa received the Thomas Jefferson Foundation Medal in Architecture on Friday. The pair, co-founders of the Tokyo-based firm SANAA, are known for light-filled, contemporary designs, with major works including the 21st Century Museum of Contemporary Art in Kanazawa, Japan; the Christian Dior Omotesando Building in Tokyo; the New Museum of Contemporary Art in New York; the Rolex Learning Center  at the École Polytechnique Fédérale de Lausanne in Switzerland; and the Louvre-Lens in France.

Several of those projects came up in Friday’s discussion, including the modular New Museum in New York, which features large white boxes – each one containing a separate gallery – seemingly stacked atop one another.

“Each has a separate gallery with its own proportion, and each one shifts slightly as the building rises,” Nishizawa said.

Sejima, showing the audience the long, smooth curves of the central student center they designed for the École Polytechnique Fédérale de Lausanne, said SANAA’s designs increasingly focus on bringing building and landscape together.

“The idea of the building as landscape is something we developed farther in our design,” she said.

“We began to feel that large, single volumes actually create a stronger boundary between inside and outside, and so our design shows a different approach,” Nishizawa said, showing designs for the Louvre-Lens Museum in France.

Instead of one large building, the site – an annex of the Louvre museum in Paris – features what he termed a “necklace” of buildings and spaces that can “react to local conditions along the site.”

Their practice, Nishizawa said, continues to “explore a very soft boundary between architecture and nature.”

School of Architecture Dean Ila Berman, introducing the two medalists, said that SANAA’s work “makes clear the difference between what is architecture and what is mere building.”

Their design philosophies – modern though they are – actually have a lot in common with Jefferson’s views on architecture, Berman said. Though the aesthetics are very different, both SANAA’s work and Jefferson’s Academical Village reflect a desire for architectural spaces that promote a democratic exchange of ideas.

“They understand that in order to embody the aspirational values of a culture in a democratic space, architecture should be awe-inspiring, yet also accessible,” Berman said.

Sejima and Nishizawa’s current projects include La Samaritaine in Paris, Bezalel Academy of Arts and Design in Jerusalem and Bocconi University campus in Milan.