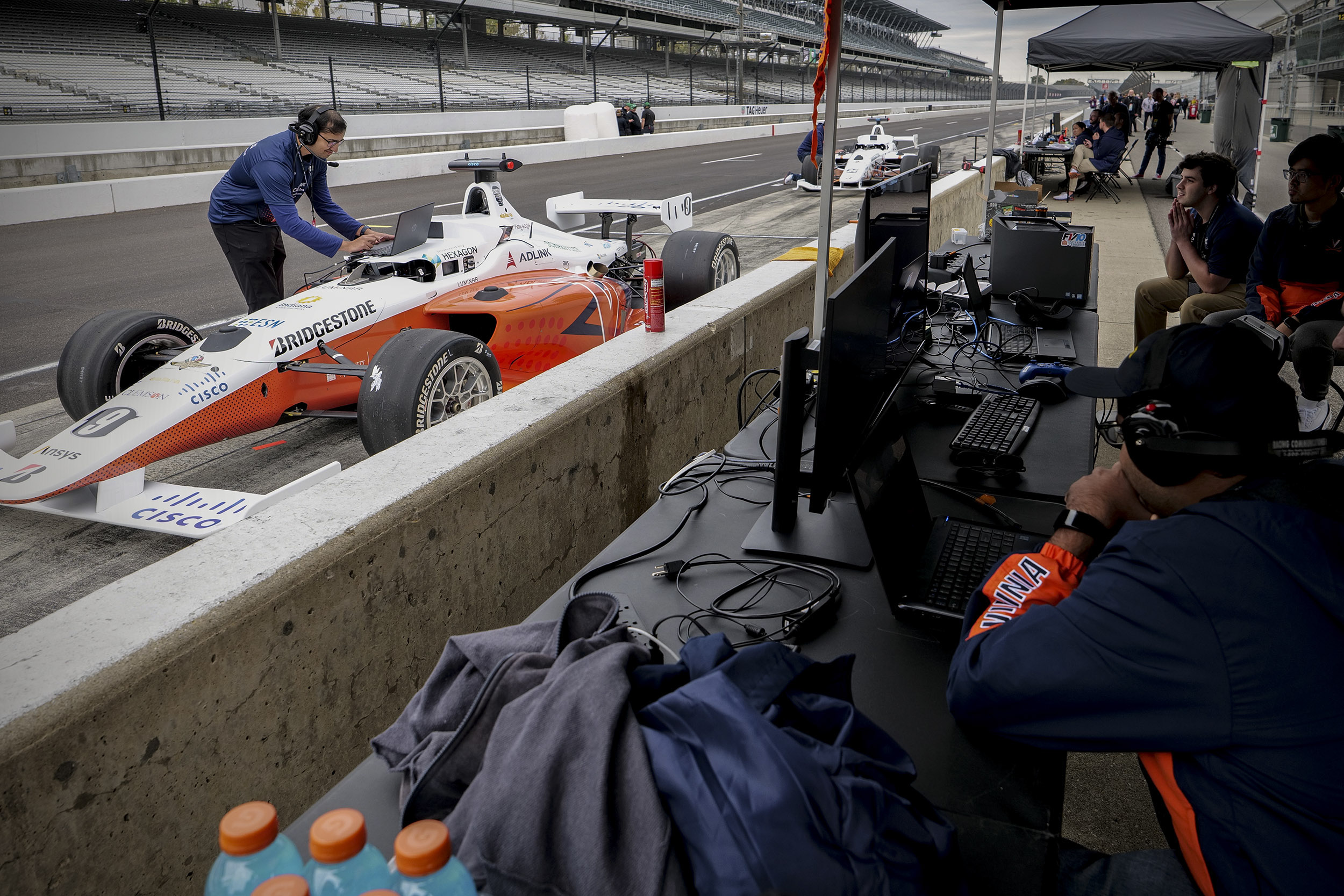 Amar Kulkarni, left, prepares the Cavalier Autonomous race car to start up for their heat in the Indy Autonomous Challenge Powered by Cisco, the first self-driving auto race at the Indianapolis Motor Speedway. (Photos by Chris Tyree, UVA Engineering)

The University of Virginia’s Cavalier Autonomous Racing team on Saturday earned its place as the fastest all-American self-driving race car team. UVA’s fully autonomous car clocked in at an average speed of nearly 120 mph and a top speed of 124 mph in the historic Indy Autonomous Challenge Powered by Cisco, solidifying UVA’s place among the international leaders in autonomy and self-driving vehicle technology.

For average speed, UVA’s race car finished behind three European teams and had no crashes, but wound up in 5th place for the whole event because of a penalty for a pit violation. The race’s $1 million top prize went to TUM Autonomous Motorsport from Technische Universität München in Germany, which pushed its car to an average speed of nearly 136 mph.

“I’m really content and satisfied with our run,” said Madhur Behl, principal for UVA’s 11-student team and assistant professor in the UVA School of Engineering and Applied Science’s departments of Computer Science and Engineering Systems and Environment. “Nobody was counting on the Cavalier Racing Team going 120 miles per hour since we were the last team to get our own car less than a month ago.

“My team is like my family. They are just tremendous. They are so passionate about autonomous racing. I’m 100% percent sure they will go on to accomplish so many great things and make you even more proud.” 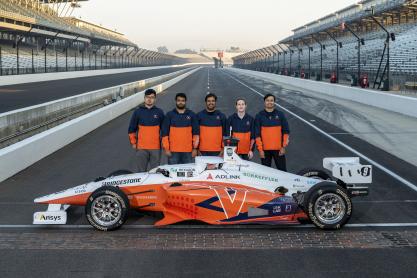 University teams from around the world competed to program and race modified Indy Lights cars at the Indianapolis Motor Speedway, in what became the highest-profile competition for autonomous vehicles since the U.S. Defense Advanced Research Projects Agency held the 132-mile DARPA Grand Challenge in the desert between California and Nevada in 2004. None of the 15 cars managed to finish the DARPA course, but the technology spawned by that event is evident in millions of vehicles on the roads today.

The world’s first automobile races were organized as a way to demonstrate the safety and reliability of newly developed horseless carriages – eventually leading to mass production of automobiles for the commercial market. The Indianapolis Motor Speedway, the most famous oval racecourse in the world, was built in 1909 by Carl Fisher to purposely test automobiles before making them available to the consumer market that was just getting started with Ford Model Ts. So the 2.5-mile track, known for high speeds, was the obvious choice for another groundbreaking race.

“There’s a long history of prize competitions setting goals that are meant to be impossible, just to see how close one might get to that goal,” said Paul Mitchell, the president and CEO of Energy Systems Network, one of the principal organizers of the event.

The aims of the Indy Autonomous Challenge were to advance technology for the commercialization of fully autonomous vehicles and to train students to research and work in the industry. 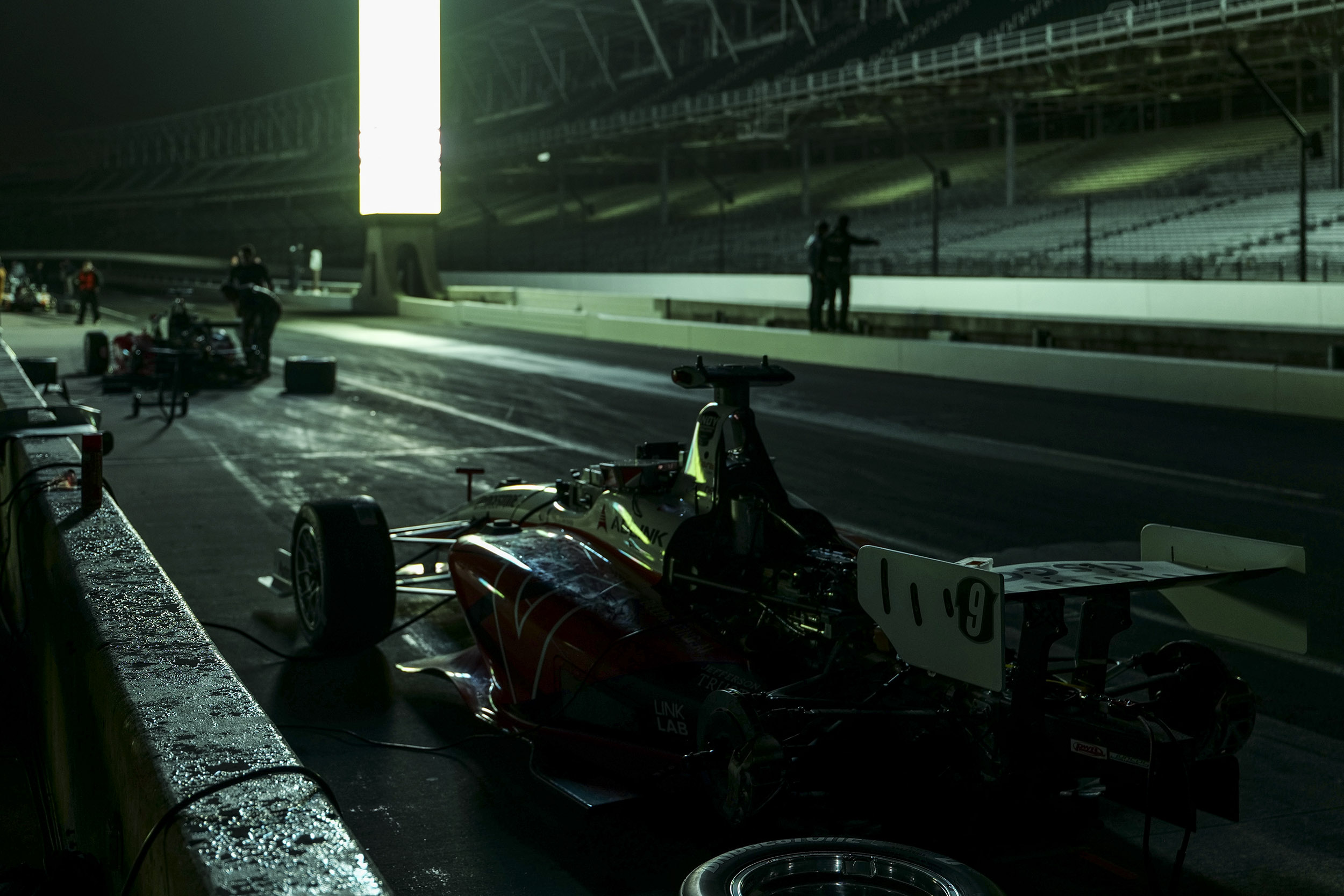 In the predawn hours before the epic race at the Indianapolis Motor Speedway, students from 21 universities around the world get their Indy Lights race cars ready for the chance to win $1 million.

Nine teams from 21 universities qualified to race in the day-long event on Saturday. Behl and his student team prepared for a long time, starting with developing algorithms to race small, 1/10th-scale race cars back in UVA Engineering’s Link Lab for cyber-physical systems. For Indianapolis, the team transitioned to developing their software for the IAC Dallara AV-21, an Indy Lights race car retrofitted with hardware and controls to enable automation, making it the fastest autonomous race car ever built. Behl and members of his team have lived and worked in Indianapolis for the past several months.

All of the teams on Saturday raced identical cars, which were outfitted with radar, cameras, lidar – a device that pulses lasers to measure distances – as well as GPS. Winning came down to the team that built the best algorithm capable of driving the car closest to its limits for control and speed.

“Getting to work on this kind of challenge is a once-in-a-lifetime opportunity. I’m just so grateful that we got to take part in this,” said Trent Weiss, a Ph.D. candidate in computer science. “We had the pace to win, but there was a slight logic error in our velocity controller that held us back a bit. But I think the day went well and I couldn’t be more proud of my teammates.”

Teams began prepping their cars before the sun came up Saturday, hoping to get one final test in before the race since practice was scrubbed on Friday due to rain. However, because other teams had lengthy failures on the track, the Cavaliers weren’t able to get a practice run in before the race, and that might have been the difference.

Two of the top European teams started off the official race before the Cavaliers and set the pace for other teams, hitting speeds over 120 mph.

Behl and his team decided to take an aggressive approach to the race and built an algorithm that would push their car to the edge of its capabilities. Their car quickly built up speed, roaring down the track at 120 mph, but because of a small error in the code, the car could never get over that pace. Following the timed race, the Cavaliers next successfully navigated an obstacle portion of the competition. 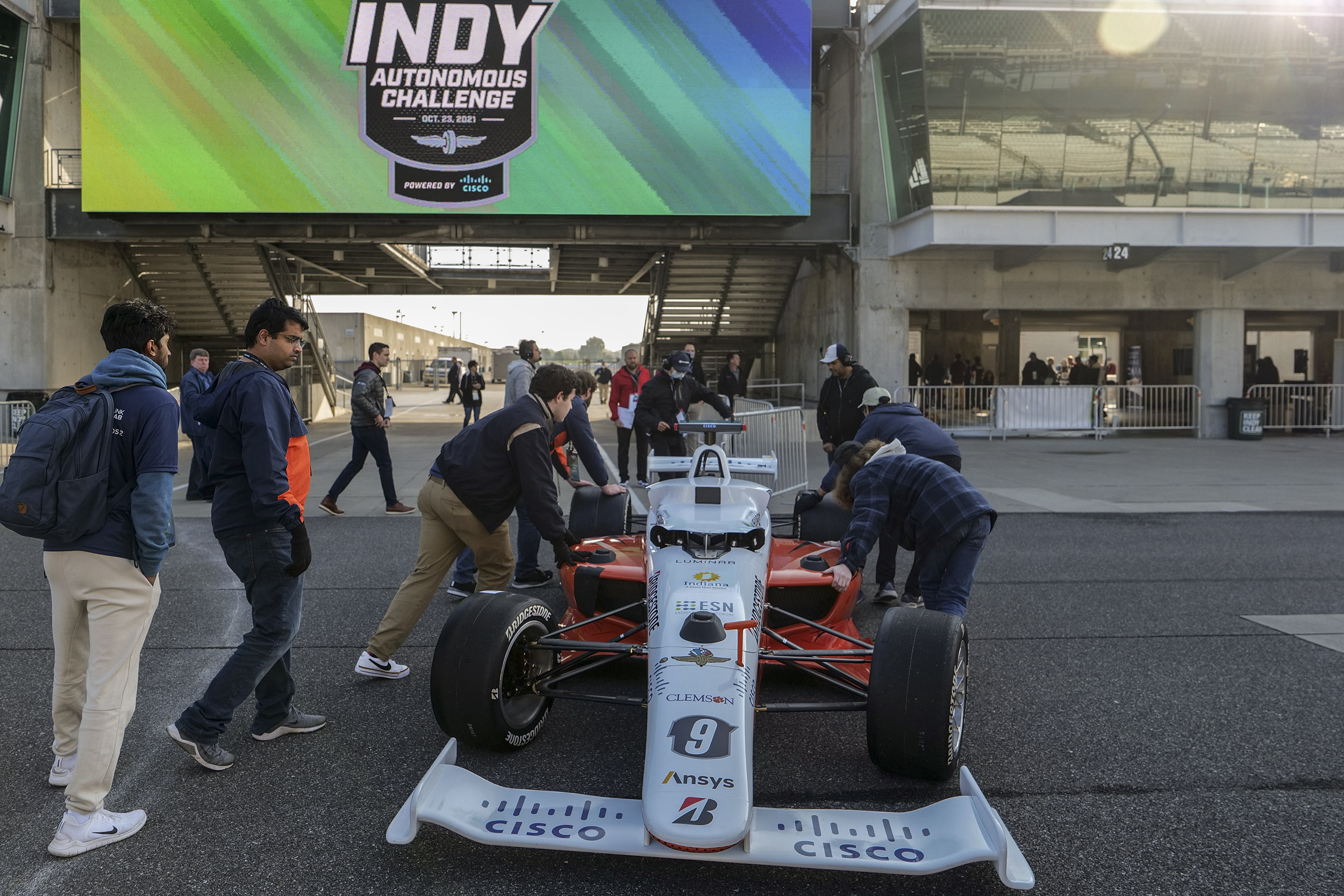 Members of the Cavaliers Autonomous Racing Team wheel the University’s Dallara AV-21 back to the garage to await the race.

On the way into the pit area, which teams had to successfully complete autonomously as part of the race procedures, UVA’s car was going too fast to safely enter and zipped past before making it to the pit autonomously in the next lap, resulting in a penalty that dropped them to 5th place overall, behind the three European teams and a group from South Korea that posted an average speed of 84 mph.

On a day that saw several other teams spin out or crash, the strong result by the Cavaliers bodes well for the future of autonomous systems research and education at UVA Engineering.

“You have to have this kind of experiential learning for students to produce talent which is world-class,” Behl said. “I have full faith and confidence that the University will continue supporting this. And I can see visions of even a big robotics center at the University where we have space to do rigorous testing and ambitious things like this.”

“There’s like a million things I didn’t know before working on this project,” said Amar Kulkarni, a master’s student in computer science. “I didn’t know about controllers or all the big problems of autonomous robotics. This experience has opened my eyes to what actual depth in the field means. How far can I go here? How can I push the limits? What’s cutting edge? What’s bleeding edge? And learning about whether these things are worth it – will they actually contribute toward functional success?” 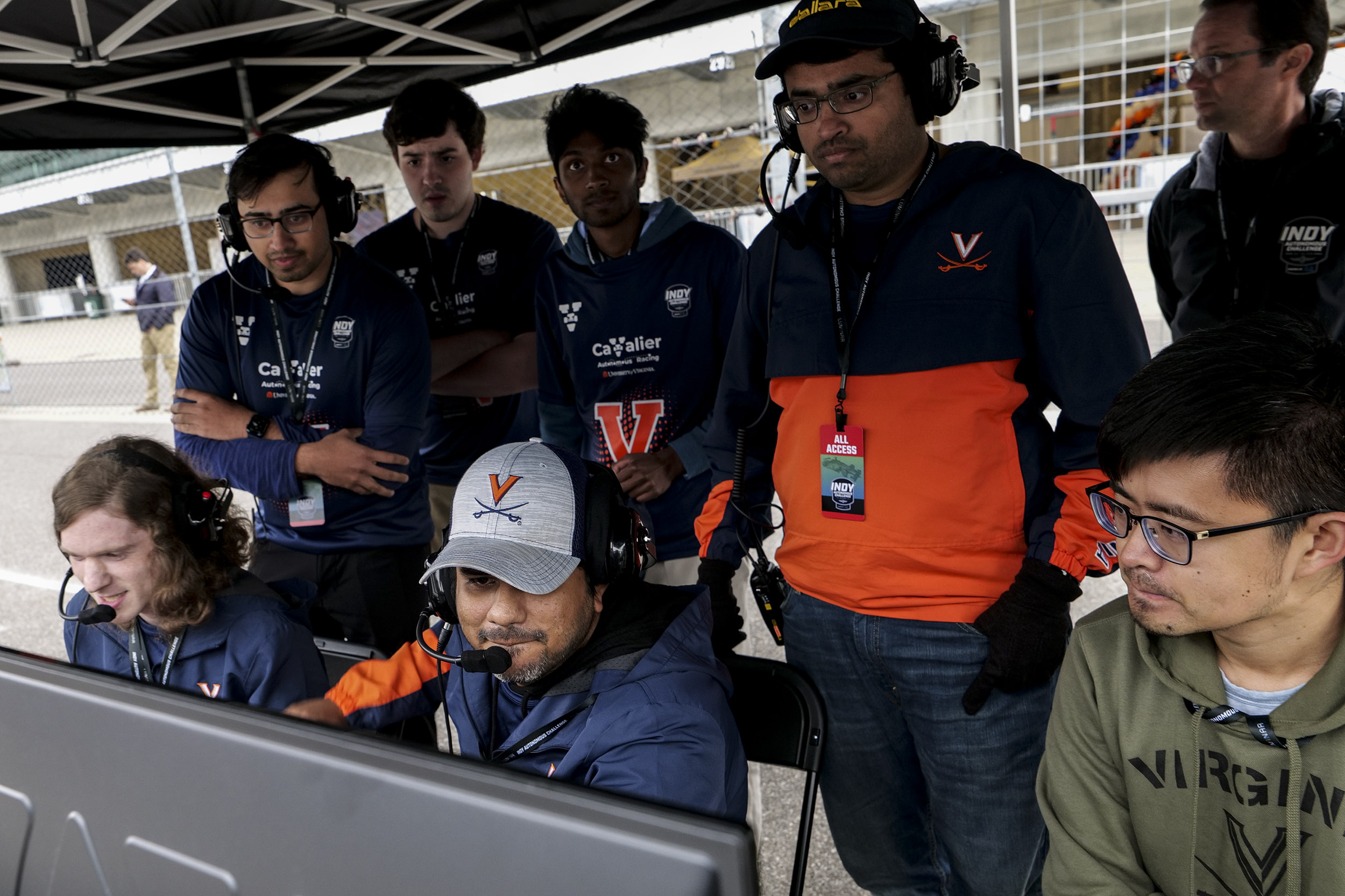 Madhur Behl bites his lip while his team anxiously watches the University’s autonomous race car roar around the Indianapolis Motor Speedway at around 120 mph.

The Indy race, driving vehicles to the edge of their control autonomously, could be the catalyst for the next wave of technical innovation that will roll off assembly lines and onto roads around the world.

“I feel like I was given a treat here to work on the edge of a big, unsolved problem. As an undergrad, it’s just really a great thing to be a part of,” said fourth-year computer engineering student Emory Ducote. “The rigor of the undergrad program at UVA Engineering has prepared me for hard situations like this.”

While the team might not have made it on the winner’s podium or claimed the $1 million prize, they proved that the autonomous systems program at UVA Engineering is one of the best in the world.

“I’m not sure exactly what international coverage this had, but I think that our showing here definitely has put us on the map for autonomous racing,” said computer science Ph.D. candidate Aron Harder, as he and his teammates relaxed by their car in the Indy Speedway garage after the event.

“What’s next for the University, and I think what’s next for autonomous racing, is really to keep pushing,” Behl said. “This is the beginning of something very exciting. I can assure you, you will soon witness multiple cars racing each other, just like in the Indy 500. And my personal ambition is, in three to five years’ time, I’m going to challenge the winner of the Indy 500 for a head-to-head race and see what happens.” 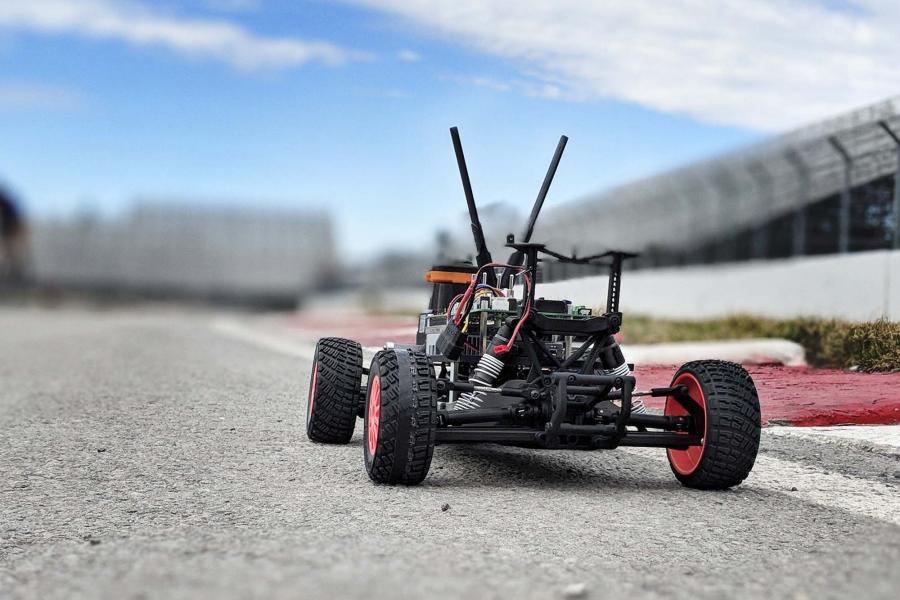 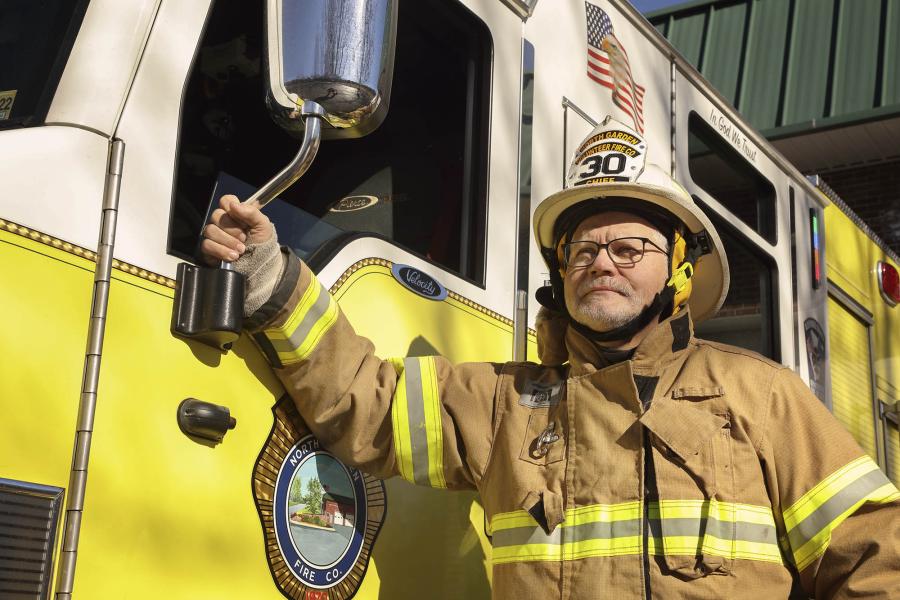 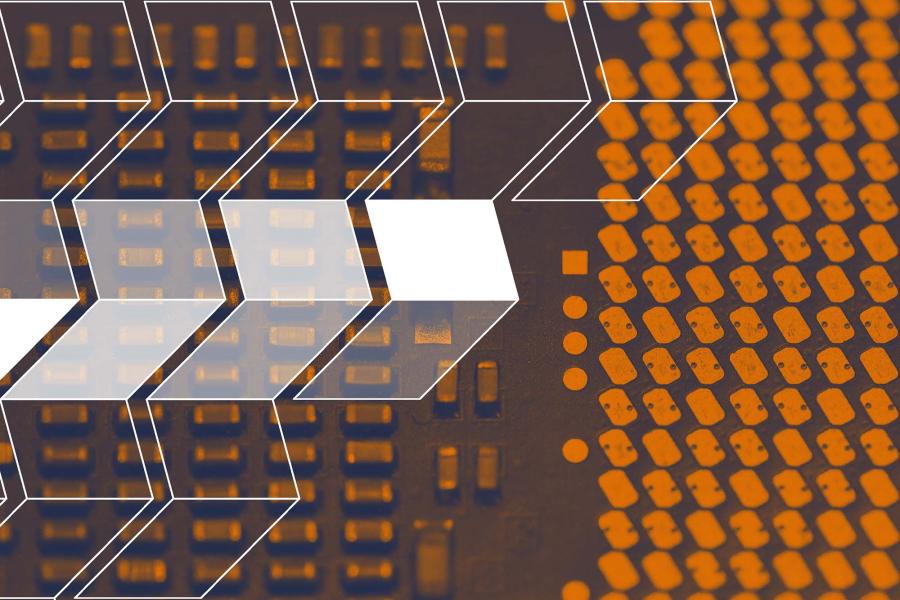