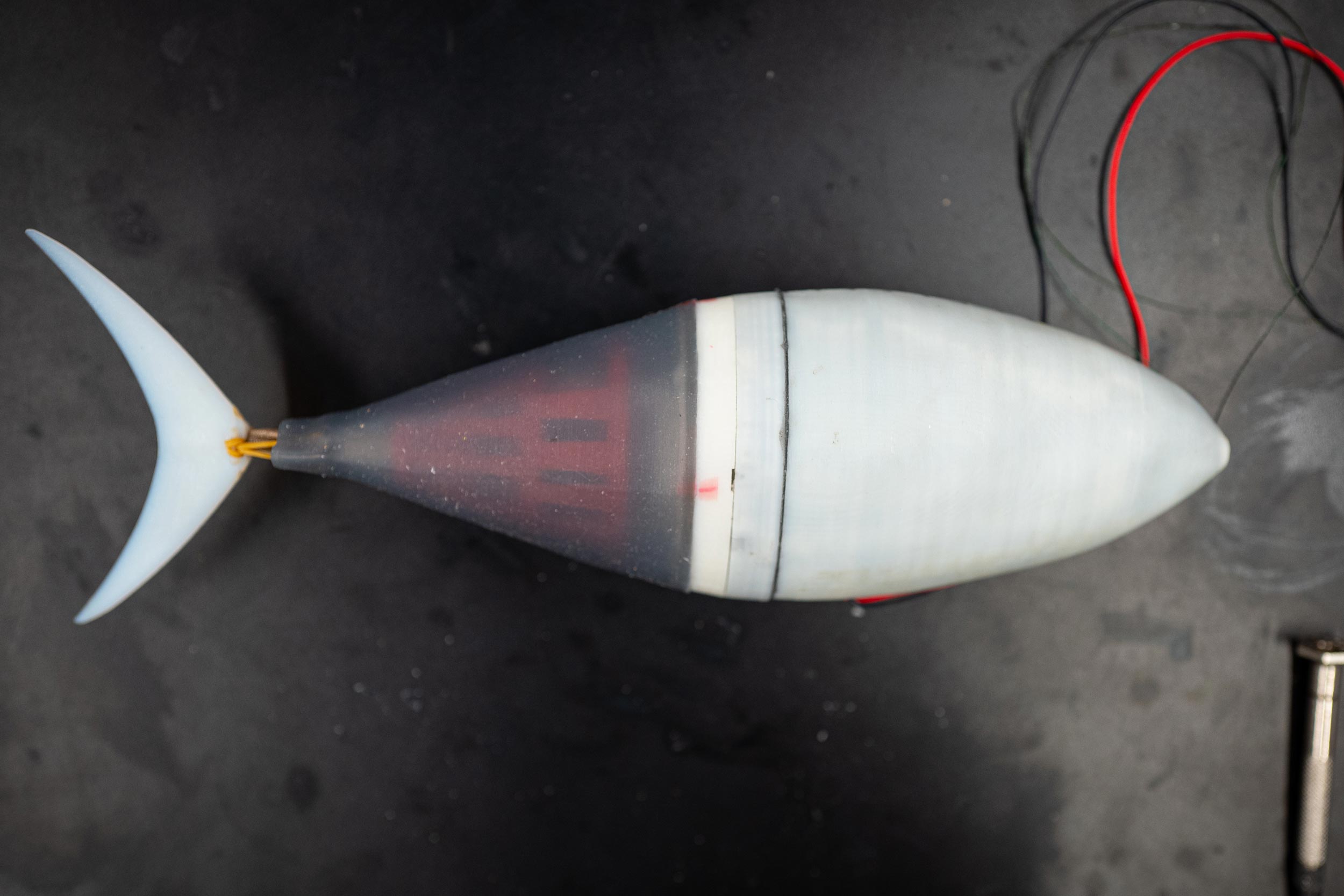 While perhaps not the same as its living counterpart, UVA’s “Tunabot” is able to mimic the speed and movement of a yellowfin tuna. (UVA Engineering photo)

Mechanical engineers at the University of Virginia’s School of Engineering, leading a collaboration with biologists from Harvard University, have created the first robotic fish proven to mimic the speed and movements of live yellowfin tuna.

Their peer-reviewed paper was published Wednesday in Science Robotics, an offshoot of the journal Science devoted to technological advancements in robotic science and engineering.

Led by Hilary Bart-Smith, a professor of mechanical and aerospace engineering, the robotic tuna project was born out of a five-year, $7.2 million Multidisciplinary University Research Initiative grant the U.S. Office of Naval Research awarded Bart-Smith to study fast, efficient swimming of different fishes. The aim of Bart-Smith’s project is to better understand the physics of fish propulsion – research that could eventually inform development of the next generation of underwater vehicles, driven by fish-like systems better than propellers.

Underwater robots also are useful in a range of applications, such as defense, marine resources exploration, infrastructure inspection and recreation. 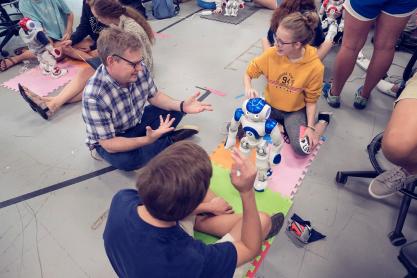 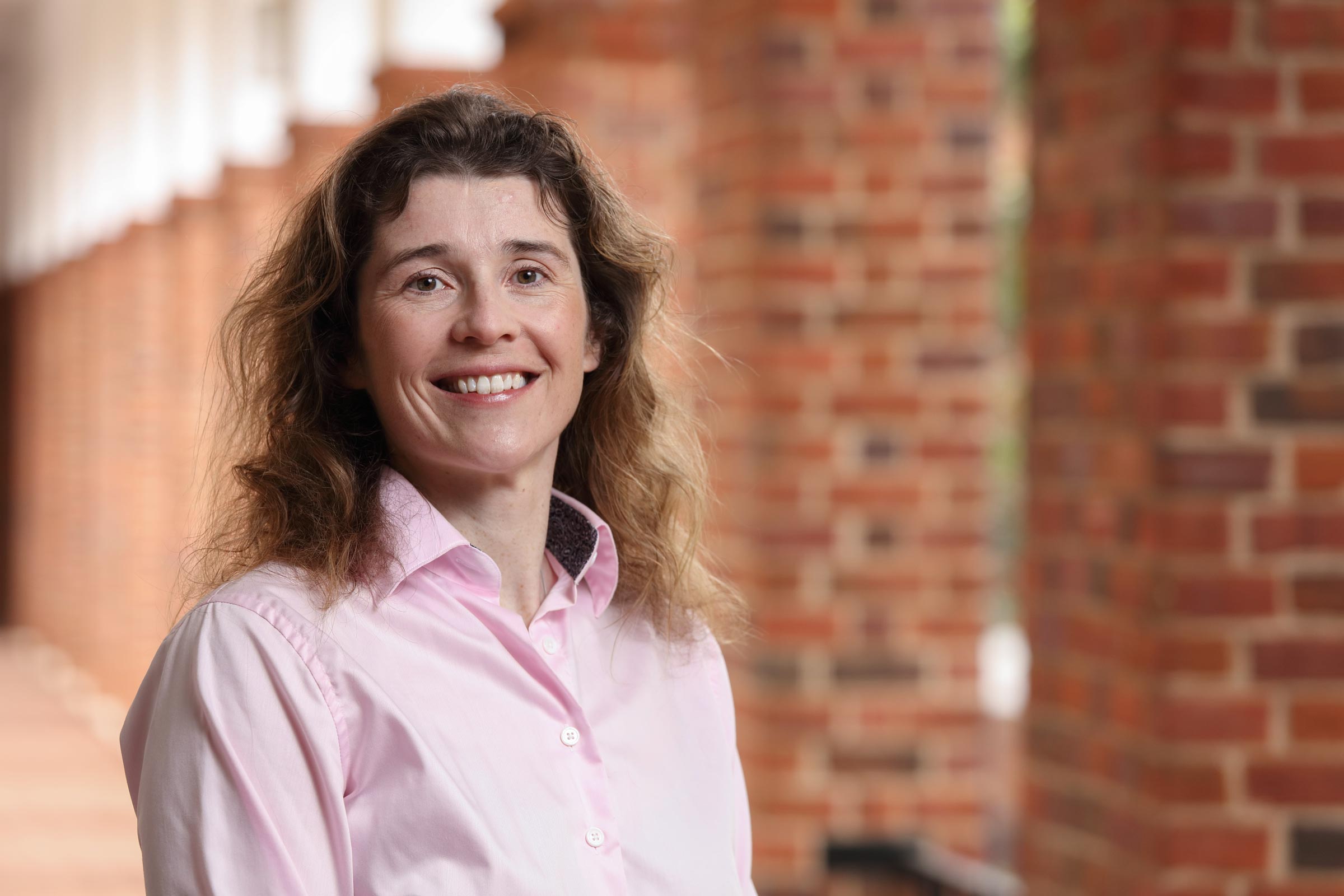 Hilary Bart-Smith’s research has sought to discern the secrets of underwater propulsion that can be learned from closely studying manta rays and yellowfin tuna. (Photo by Tom Cogill)

Well before bio-inspired propulsion systems can become viable for public and commercial use in manned and unmanned vehicles, however, researchers must be able to reliably understand how fish and other creatures move through water.

“Our goal wasn’t just to build a robot. We really wanted to understand the science of biological swimming,” Bart-Smith said. “Our aim was to build something that we could test hypotheses on in terms of what makes biological swimmers so fast and efficient.”

The team first needed to study the biological mechanics of high-performance swimmers. Harvard biology professor George V. Lauder and his team of researchers precisely measured the swimming dynamics of yellowfin tuna and mackerel. Using that data, Bart-Smith and her team, research scientist Jianzhong “Joe” Zhu and Ph.D. student Carl White, constructed a robot that not only moved like a fish underwater, but beat its tail fast enough to reach nearly equivalent speeds. 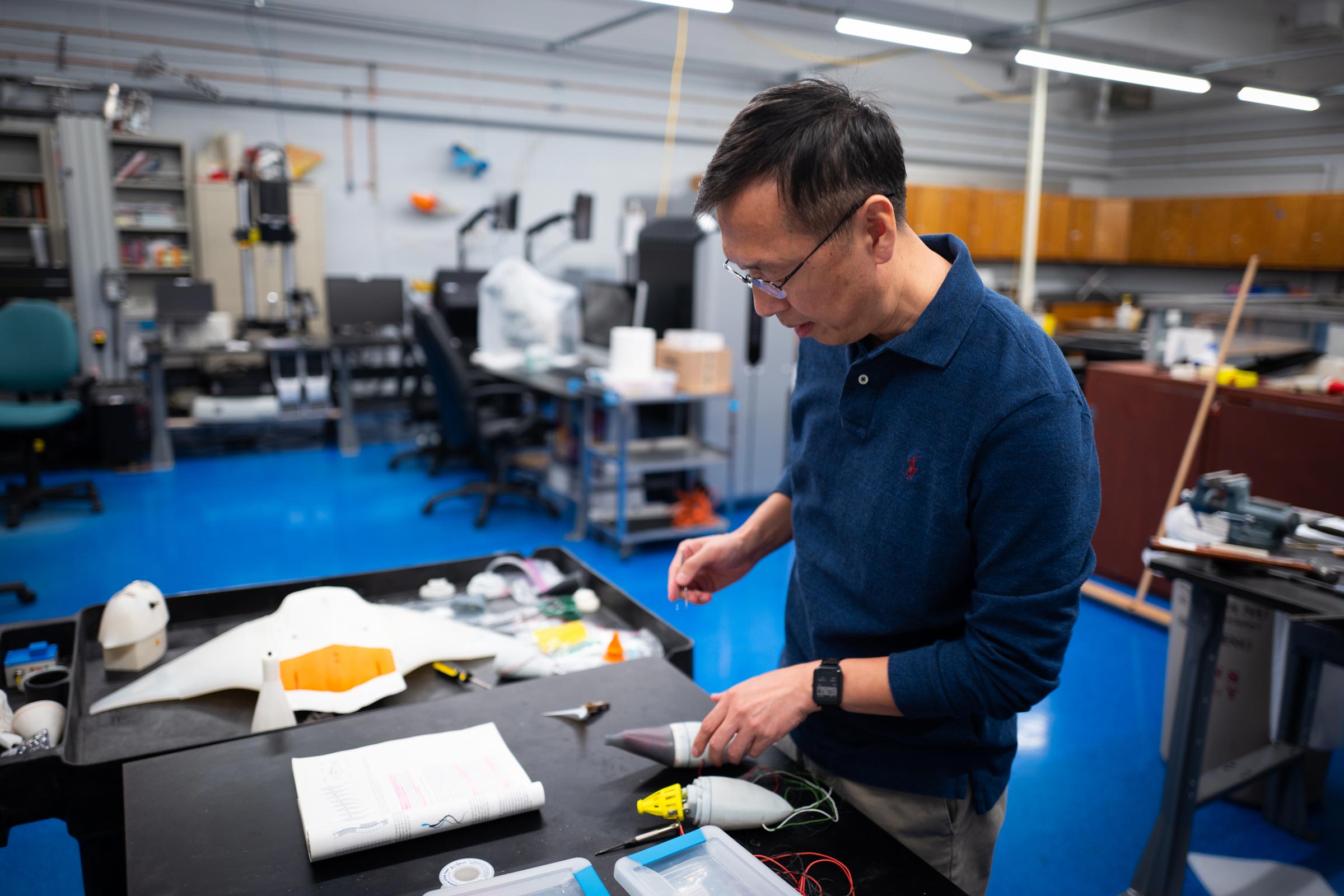 They then compared the robot they named “Tunabot” with live specimens.

“There are lot of papers on fish robots, but most of them don’t have much biological data in them. So I think this paper is unique in the quality of both the robotic work and the biological data married together into one paper,” Lauder said.

“What is so fantastic with the results we are presenting in the paper are the similarities between biology and the robotic platform – not just in terms of the swimming kinematics, but also in terms of the relationship between speed and tail-beat frequency and energy performance,” Bart-Smith said. “These comparisons give us confidence in our platform and its ability to help us understand more about the physics of biological swimming.”

The research team captured and documented the motion of its robotic fish. (UVA Engineering image)

The Tunabot project is an outgrowth of Bart-Smith’s second, highly competitive Multidisciplinary University Research Initiative from the Office of Naval Research; in 2008, Bart-Smith received a $6.5 million award to develop an underwater robot modeled on a manta ray.

The tests of Tunabot take place in a large lab in the Mechanical Engineering building at UVA Engineering, in a flow tank that takes up about a quarter of the room, and at Harvard University in a similar facility. The eyeless, finless replica fish is roughly 10 inches long; the biological equivalent can get up to seven feet long. A fishing line tether keeps the robot steady, while a green laser light cuts across the midline of the plastic fish. The laser measures the fluid motion shed by the robot with each sweep of its fabricated tail. As the current of water in the flow tank speeds up, the Tunabot’s tail and whole body move in a rapid bending pattern, similar to the way a live yellowfin tuna swims.

“We see in the fish robotics literature so far that there are really great systems others have made, but the data is often inconsistent in terms of measurement selection and presentation. It’s just the current state of the robotics field at the moment. Our paper about the Tunabot is significant because our comprehensive performance data sets the bar very high,” White said.

The relationship between biology and robotics is circular, Lauder said. “One reason I think we have a successful research program in this area is because of the great interaction between biologists and roboticists.” Each discovery in one branch informs the other, a type of educational feedback loop that is constantly advancing both the science and the engineering.

“We don’t assume that biology has evolved to the best solution,” Bart-Smith said. “These fishes have had a long time to evolve to a solution that enables them to survive – specifically, to eat, reproduce and not be eaten. Unconstrained by these requirements, we can focus solely on mechanisms and features that promote higher performance, higher speed, higher efficiency. Our ultimate goal is to surpass biology. How can we build something that looks like biology but swims faster than anything you see out there in the ocean?” 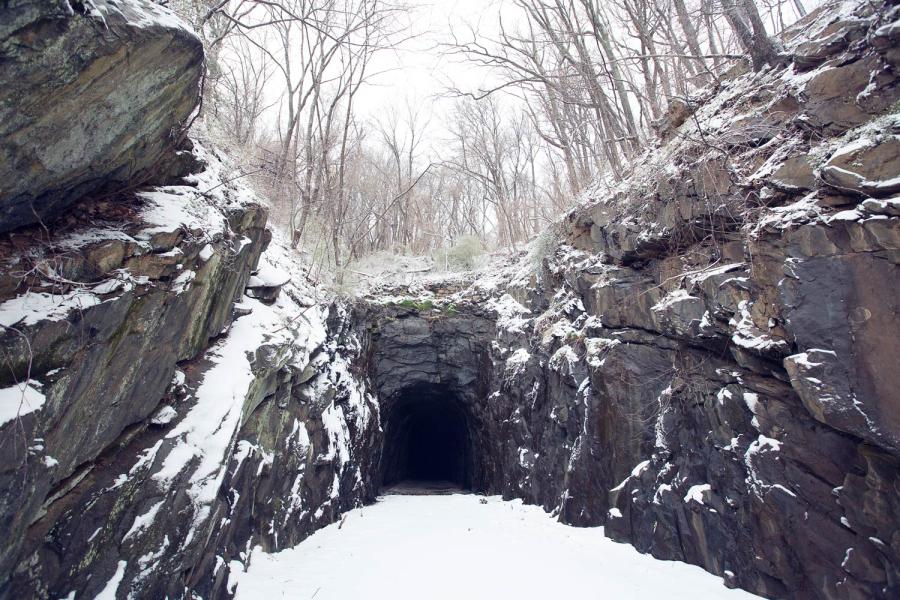 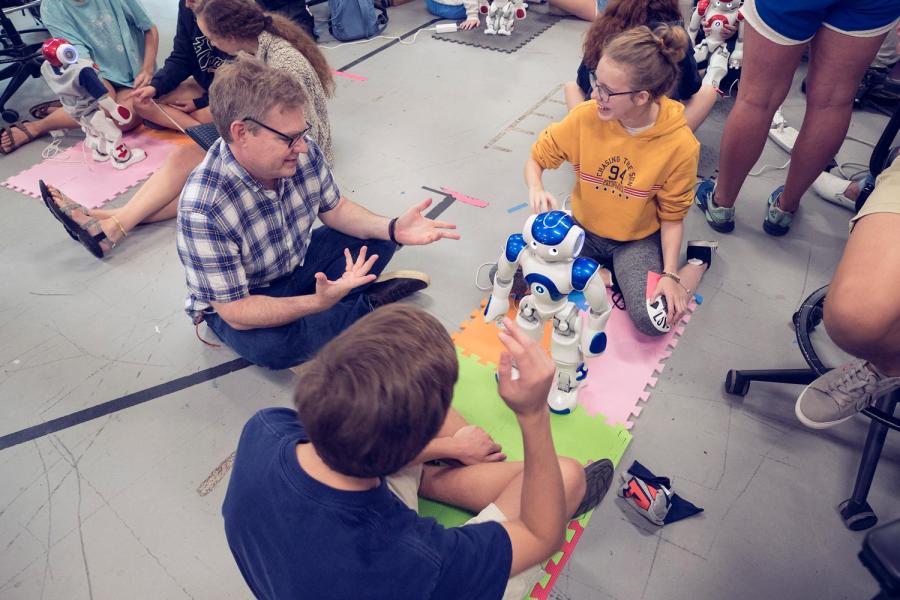 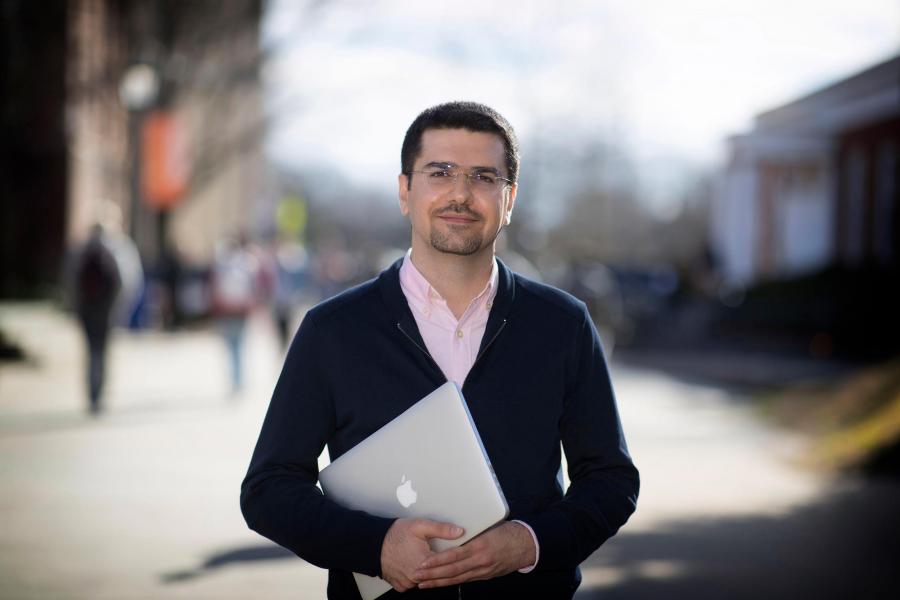