UVA Looks to Build on 2019 Progress at Scott Stadium 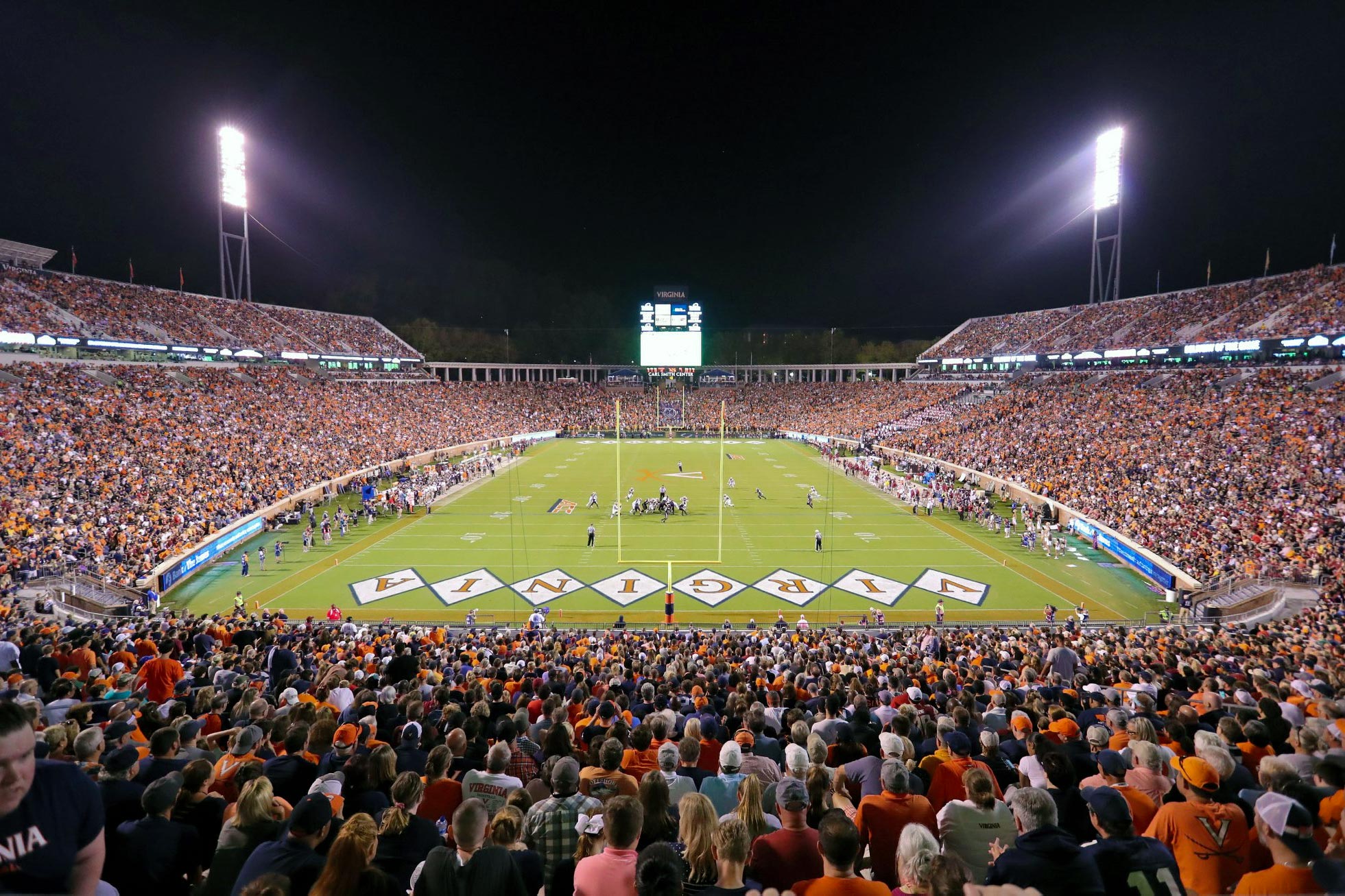 Season tickets for the upcoming University of Virginia football campaign went on sale Wednesday at 9 a.m., and among the fans renewing their orders from 2019 will be Landon Wilkins.

Wilkins, who has two degrees from UVA, began regularly attending games at Scott Stadium when he was in graduate school. He vividly remembers Virginia’s 16-13 win over the 16th-ranked Miami Hurricanes on Oct. 13, 2018.

“That atmosphere was intense,” Wilkins said, “and that’s actually the game where I was like, ‘Wow, this is going somewhere.’”

The Cavaliers finished 8-5 in 2018, their third season under head coach Bronco Mendenhall, after defeating South Carolina, 28-0, in the Belk Bowl.

In 2019, Wilkins bought season tickets for the first time, and he’s glad he did. In a season that included the Wahoos’ first appearances in the ACC championship game and the Orange Bowl, they posted a 7-0 record at Scott Stadium. At home, UVA defeated William & Mary, Florida State, Old Dominion, Duke, Georgia Tech, Liberty and, in the annual battle for the Commonwealth Cup, Virginia Tech.

The win over the Hokies was the Cavaliers’ first since 2003 and clinched the program’s first Coastal Division title.

“The Tech game was unforgettable,” said Wilkins, who earned a bachelor’s degree in interdisciplinary studies from UVA in 2016 and a master’s in educational psychology in 2018. “The Florida State game was unreal, and there were quite a few games where I was like, ‘All right, we’re going up.’”

The student turnout for the William & Mary game – 10,027 – was the second-highest at Scott Stadium in the past 25 years. The crowd for the Florida State game – 57,826 – was by far the largest at home during Mendenhall’s tenure as Virginia’s coach. The Hoos held on for a 31-24 win over the Seminoles, after which fans rushed the field to celebrate.

“I felt lucky to be part of it,” Mendenhall said of the atmosphere that night. “To have so many people come and support us was so gratifying to not only myself but to my staff and the players. … It had an impact on the game. It helped us win, and I’m appreciative of that. From the student section to the fans to the upper deck to the hill and the end zone, man, what an amazing setting.”

“The atmosphere at Scott Stadium last season was vibrant and energetic,” Mendenhall said. “I noticed it on the sidelines. What I saw was people enthusiastically behind the team, having fun and enjoying themselves. We truly appreciate the support and loyalty. A lot of fans came back to the program last season, and we noticed. I said last year we were on the tipping point of making Scott Stadium a special place to play. I would love to see us continue to move in that direction for the upcoming season.”

“It’s something that we talk about constantly,” said Carla Williams, UVA’s director of athletics. “It is a constant goal of ours to improve the game-day experience for our fans, to improve the game-day atmosphere for our players, and to attract more people to Scott Stadium. That’s something that we really, really work hard on, and the staff did a great job of gathering feedback from our fans, reviewing that feedback and implementing enhancements to help in all three of those areas.”

Williams came to UVA from the University of Georgia in December 2017. From the start, she prioritized improving the experience at Scott Stadium for fans and players, as well as recruiting targets and their families.

UVA’s season ticket total in 2019 was 24,265, an increase of 15% from 2018. That was the biggest jump in a quarter-century at Virginia, and Williams hopes to see another increase in season tickets this year.

Virginia, which opens the season Sept. 7 against Georgia in the Chick-fil-A Kickoff Game in Atlanta, will play six times at Scott Stadium: Sept. 12 against Virginia Military Institute, Sept. 19 against Connecticut, Oct. 3 against North Carolina, Oct. 21 against Miami, Nov. 7 against Louisville and Nov. 21 against Pittsburgh.

“We took strides last year, but we have a lot of goals still ahead of us that we want to reach to benefit our entire department. And so we still have a lot of work to do.”

Wilkins, who now works in Charlottesville, has been a guest lecturer in classes taught by Lisa Speidel, an assistant professor in UVA’s Department of Women, Gender & Sexuality (who received a “shout-out” from quarterback Bryce Perkins during the Florida State game in September). That’s strengthened his connection to Mendenhall’s program, and Wilkins said his decision to renew his season tickets was an easy one.

“There’s always a lot of football players in those classes,” Wilkins sad, “and they always are the ones that have the most impact on me when I walk out the door, and I love football. So I’m going to support the team, because they support me in the classroom.”