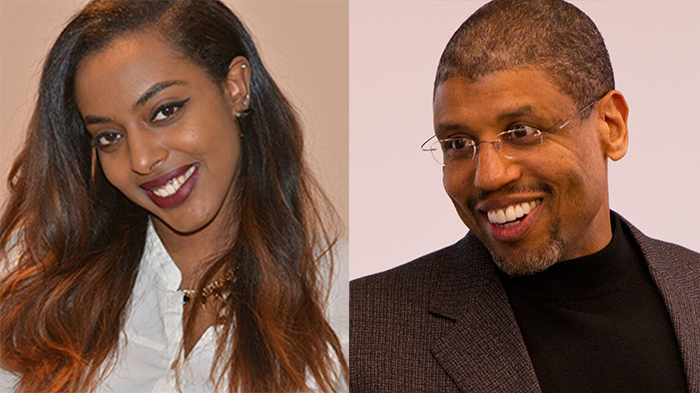 Hajar Ahmed, a fourth-year student in politics, and Martin Davidson, a professor of leadership and organizational behavior in the Darden School of Business, are the recipients of the 2014 John T. Casteen III Diversity-Equity-Inclusion Leadership Award.

Clarification, March 18, 2014, 2:20 p.m.: Removes attribution of quote, "If you don't stand for something, you will fall for anything," to Malcolm X. Though the proper attribution is unclear, it appears to have surfaced in the mid-1940s.

Two members of the University of Virginia, a faculty member and an undergraduate, embody the ideals and spirit of the 2014 John T. Casteen III Diversity-Equity-Inclusion Leadership Award.

The U.Va. Office for Diversity and Equity has chosen Hajar Ahmed, a fourth-year student in politics, and Martin Davidson, a professor of leadership and organizational behavior in the Darden School of Business, to receive this year’s annual award, now in its fifth year. They will be recognized Friday at a private luncheon. It’s the first time U.Va. has named two winners of the annual award, and the first time a U.Va. student has won.

The honor recognizes students, faculty or staff members who have demonstrated a deep commitment to diversity in the U.Va. community. The award was established to recognize the accomplishments of former President Casteen, who was the award’s inaugural recipient in 2010.

Specific criteria for the award include playing a leadership role in increasing diversity, equity and inclusion at U.Va. and making a sustainable and quantifiable impact in these areas.

Davidson literally wrote the book on diversity, said Darden Dean Robert Bruner, who nominated him. His 2011 book, “The End of Diversity as We Know It: Why Diversity Efforts Fail and How Leveraging Difference Can Succeed,” is widely accepted in the business world, Bruner wrote.

“The two award-winners have demonstrated leadership and a deep commitment to diversity, equity and inclusion at the University in substantive ways,” said Dr. Marcus L. Martin, vice president and chief officer for diversity and equity. “This is the first time the committee has selected two awardees and the first time a student was selected. We had a record number of nominations this year – all stellar candidates for the award,” he said.

Rukhaiya N. Amir, a fourth-year student in the Curry School of Education’s kinesiology program, also majoring in South Asian Languages & Literature, wrote in nominating Ahmed that her favorite quote is, “If you don’t stand for something, you’ll fall for anything.”

“Hajar stands out because she has found a way to effect change in an important aspect of advancing diversity at the University: financial aid,” Amir wrote.

“At the University, Hajar thinks more broadly than just about recruiting diverse populations in a single academic department like law or education or for a single culture like Nubians, but rather access to higher education as a whole.”

Although Ahmed is graduating this year and will not personally be affected by the changes to the AccessUVA program, “She participates in the campaign because of her concern for the students who will come after her, students who may not get the same chances she did to attend this university,” Amir wrote.

In August, U.Va.’s Board of Visitors made changes to the program that will result in capped loans being included in financial aid packages of all students beginning in the 2014-15 academic year. Previously, the lowest-income students received all-grant packages, but the board determined program changes were necessary to place the University’s financial aid program on a sustainable path for the future. Institutional funds allocated for need-based student aid have increased from $11 million to more than $40 million since AccessUVa’s founding in 2004.

“Hajar possesses a selfless devotion to uplifting others without expecting recognition,” wrote Daniel Driscoll, program coordinator for Fraternity and Sorority Life in the Office of the Dean of Students.

“As vice president of the Multicultural Greek Council, Hajar helped to elevate the vision and mission of the council by developing strategic and action-oriented plans to more seamlessly connect a values-based fraternal experience with rich cultural identities at the University.

“One quality that I particularly admire in Hajar is her commitment to embodying a consistent values-based lifestyle. Her commitment to scholarship, service, equity, leadership, multiculturalism, inclusion and empowerment are personified in her daily walk as a servant leader,” Driscoll wrote.

The same can be said of Davidson: The U.Va. community has also benefitted from his daily walk, bringing the concepts of diversity and inclusion from intellectual ideas into action. He served as Darden’s associate dean for diversity from 2008 to 2011. In 2012, the Office of Equal Opportunity Programs recognized him with an EOP Champion award for his efforts to improve diversity and equity on Grounds.

“Martin is the quintessential example of an educator/change agent whose passion is making his world a more inclusive place,” Bruner wrote in his nomination. “Since joining the faculty in 1998, Martin has actively taught M.B.A. and executive students in the field of leadership. In these courses, he has been able to introduce the topic of diversity and managing differences. His skill allows students to find a voice to discuss sensitive topics, including gender, race, country of origin and sexual orientation, and to respect the variety of perspectives of their classmates.”

Davidson has served as a resource and adviser to other U.Va. schools and units, in addition to outside businesses and organizations. He has worked with Student Affairs, the School of Nursing, the Curry School and the Batten School of Leadership and Public Policy.

“Diversity is not an easy topic to address,” wrote Kellie Sauls, Batten’s  director of admissions and financial aid, “laden with historical pain-points as it relates to race and gender, and more recently a virtual landmine as it relates to religion and sexual orientation. Not only does Martin navigate this space with adeptness, but he also uses it to teach students, business leaders and colleagues how to think about diversity differently.

“His work has been lauded by his peers and has garnered great attention for the University and the Darden School. Darden was actually recognized in 2013 with a grade of ‘A’ for its diversity work and climate, due in large part to Martin’s efforts,” she wrote.

“His arguments are thoughtful and targeted. His effortless charisma powers a deeply important message about who we are, who we should be and how to get there. He’s neither quiet nor loud, neither zealous nor tepid. He’s an artist with words and just the type of leader who makes big changes that endure,” Rodriguez wrote.

Meet the New Cavalier on Horseback: She’s Eager To ‘Carry On a Legacy’ END_OF_DOCUMENT_TOKEN_TO_BE_REPLACED

Housing Changes Are a Breath of Fresh, Cool Air – Especially for Lawnies END_OF_DOCUMENT_TOKEN_TO_BE_REPLACED

Virginia Football – For All Virginia END_OF_DOCUMENT_TOKEN_TO_BE_REPLACED