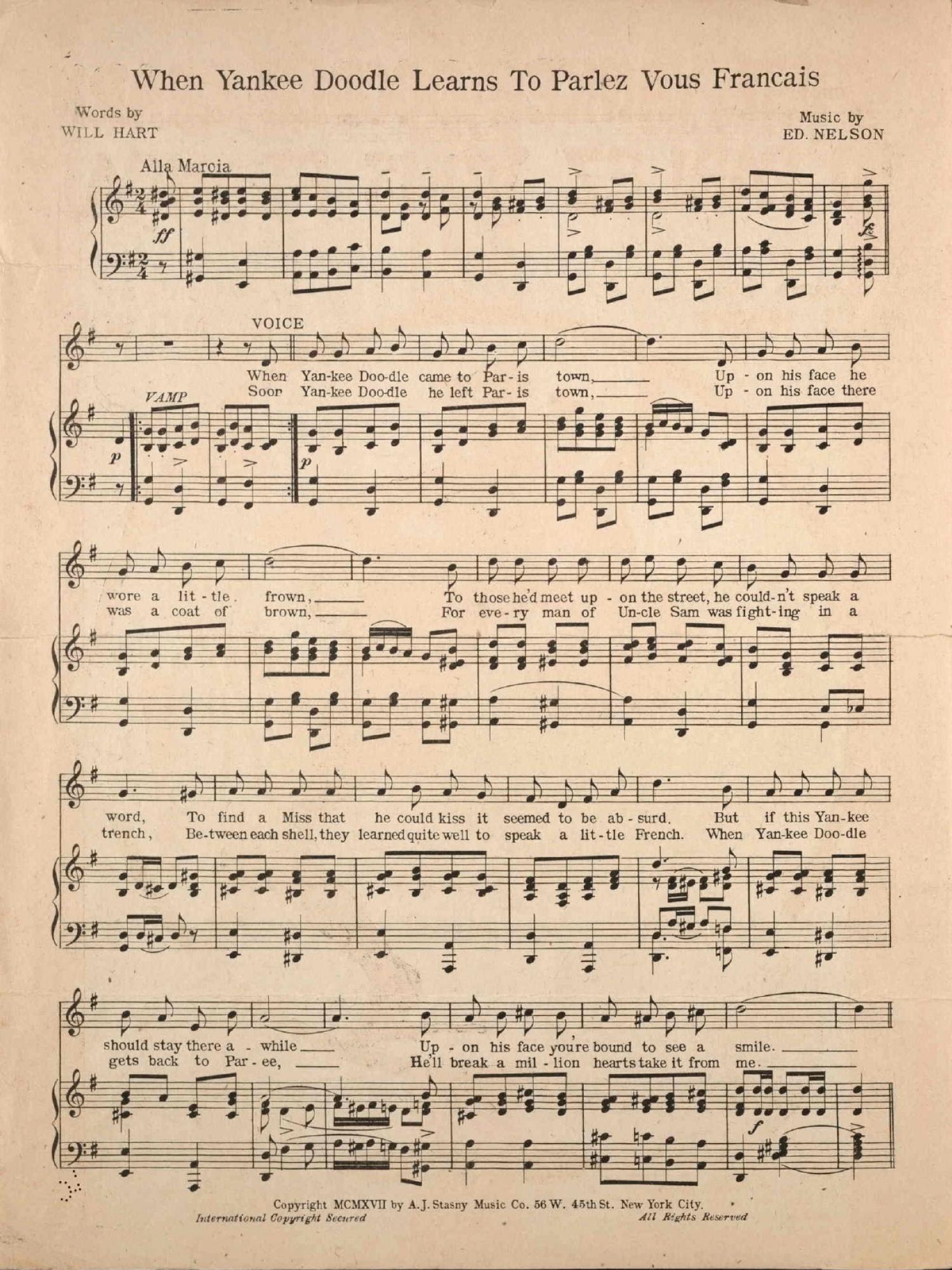 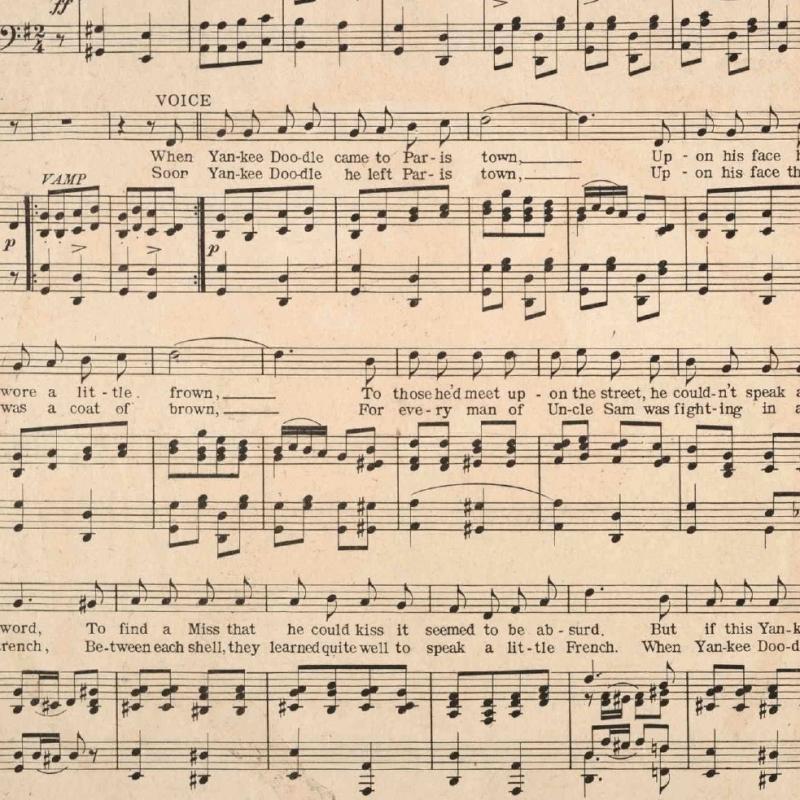 The Music of World War I

UVA students helped bring 100-year-old World War I sheet music back to life – and discovered insights into their own political moment.

The World War I-era sheet music housed in the University of Virginia’s Albert and Shirley Small Special Collection Library should feel old, by most measures.

It was composed more than 100 years ago for a massive war fought not with nuclear power or cyberweapons, but in the trenches, with bullets, bombs and millions of men. It was heard not through earbuds or stereo speakers, but in parlor music concerts and over the radio, a new technology that was only just beginning to make its way into American homes. Some of the music’s themes – including the songs’ characterizations of women and references to white supremacy – now appear out-of-touch, troubling or offensive.

And yet, students in assistant dean and assistant professor of music Elizabeth Ozment’s “ReSounding the Archives” course – most of them born more than 80 years after the war began – found plenty to relate to as they listened to, analyzed and help recreate the century-old songs.

“I was expecting the music to feel a bit foreign to the students, but they really searched out pieces that reflected their own personalities and intellectual interests, and made so many connections to contemporary politics and culture,” Ozment said. 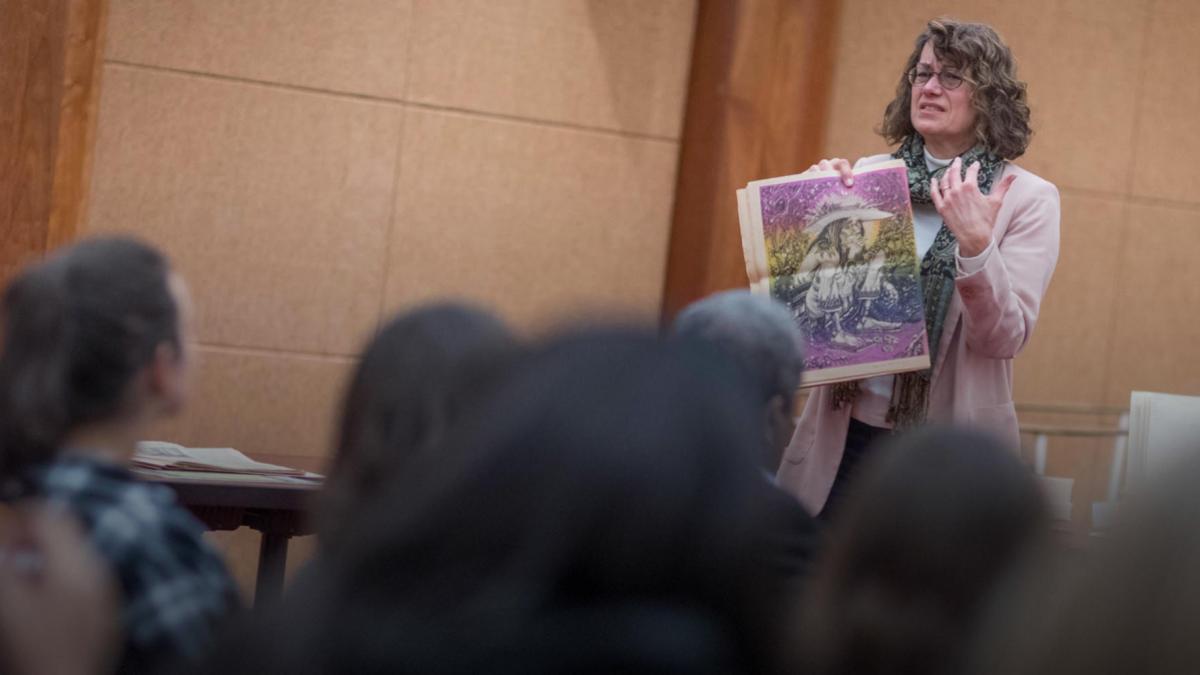 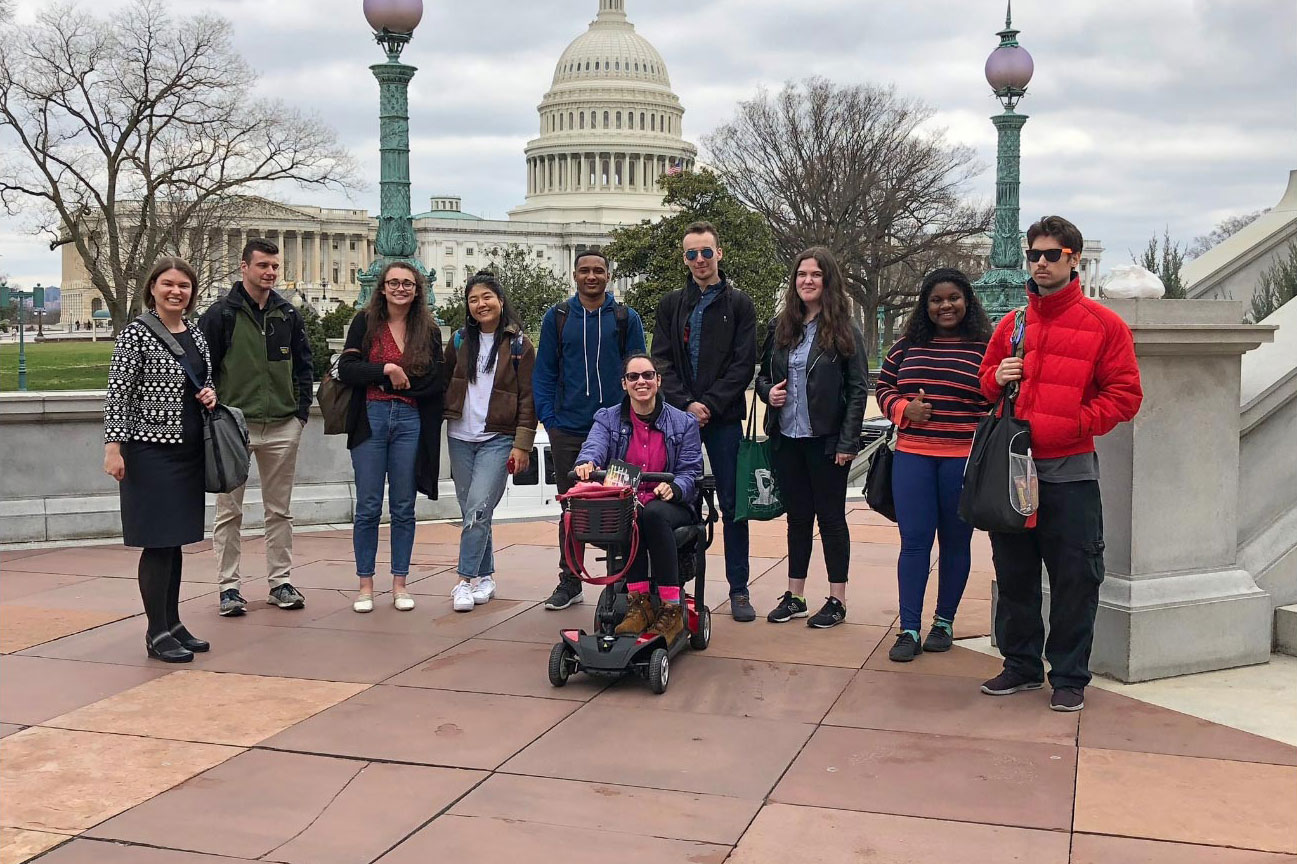 Ozment and her students were part of an ongoing collaborative project, also called “ReSounding the Archives,” between UVA, Virginia Tech and George Mason University, funded by 4-VA, a collaborative partnership among six Virginia universities. Students from each school researched and analyzed World War I songs from UVA’s archives, and George Mason students recorded studio versions and even traveled to UVA to perform in a live “parlor concert” in front of a packed house in UVA’s Garden Room.

Ozment’s students visited several exhibitions featuring World War I music, including an exhibition at Woodrow Wilson’s presidential library in Staunton and a behind-the-scenes tour of the Library of Congress, guided by music librarians.

The songs they studied, now digitized and freely available on the ReSounding the Archives website, are catchy and patriotic, intended to rally the public to join the war effort. The songs were recorded by George Mason students Crystal Golden (soprano), Estrella Hong (piano) and producers Talha Mirza, Massimo Zaru Roque and Kyotaro Terai.

They gave students a lot to think about.

2018 UVA graduate Emily Dietz, for example, explored one songwriter’s choice to focus on a soldier’s fantasized romantic exploits, rather than the grim reality of trench warfare, in “When Yankee Doodle Learns to ‘Parlez Vous Francais.’”

“Sheet music would sell better if it told a story of a soldier wooing a French woman instead of the horrific truth of the soldier’s living conditions,” she wrote. “Similar to an advertising jingle, Tin Pan Alley publishers took certain measures to sell the war to the American public.”

Using the familiar tune of Yankee Doodle, she said, “was a tactical choice because the original tune contained powerful symbolic value, with historical and cultural relevance dating back to the American Revolution.”

Ky Nguyen, a fourth-year UVA biology student and aspiring doctor, was interested in a subgenre of “stuttering songs,” most of which feature young men stuttering lyrics after they are bowled over by a young woman’s beauty. Nguyen wrote about a song called “K-K-K-Katy,” which, she said, captured anti-immigrant and nativist sentiments through not-so-subtle references to the Ku Klux Klan, and also showed how attitudes and understanding of speech disorders like stuttering have evolved.

“Stammering songs from this time period reflect heightened attention to English language fluency in American culture as a marker of normalcy and belonging,” Nguyen wrote, noting that the United States admitted more than 14 million immigrants between 1900 and 1920, mostly from Southern and Eastern Europe, and that “brewing concerns about the impact of mass immigration and the ability of non-English speakers to assimilate triggered anti-immigrant nativism that we hear reflected in Theodore Roosevelt’s ‘100 percent American’ speeches, and see in the rise of the Ku Klux Klan.”

“Although these developments are not directly referenced in the lyrics to ‘K-K-K-Katy,’ we should not dismiss the possibility that this song was understood against this political backdrop,” she said.

Ozment loved seeing how Nguyen, like other students in the class, used her own academic and personal background to interpret the song.

“She was very interested in disability studies, and the song also prompted her to reflect on her own family’s immigration experiences,” Ozment said. “We had a really diverse group of students, in terms of majors and areas of academic interest. There were biology students, politics students, media studies students and many more, and they all brought something new to the class.”

Tess Irelan even brought firsthand experience from her studies abroad the semester before. Irelan used her experience in Germany – where she took history classes looking at the war from a German perspective – to analyze “Our Gallant 91st Wild West Division.”

She specifically focused on the word “Hun,” widely used at that time to characterize Germany as a barbaric enemy. The term, widely offensive to Germans, was used to “characterize the German enemy as a ‘barbaric’ and ‘primitive’ threat to the safety of the American public,” Irelan wrote, “and helped Americans justify going to war.”

“It was a great opportunity for the students to do hands-on historical research and to think about the role music plays in any cultural or historical moment,” Flanigan said. “It was really exciting to watch them go through that discovery process.”

Barham, who holds a Certificate in History of Manuscript from the UVA-based Rare Book School, helped students to examine not only the sheet music, but the covers, illustrations and other marginalia that came along with it.

“A piece of sheet music can tell you a lot more than the tune you play,” he said. “As the students started choosing their pieces, it was cool to see what caught their attention in the covers, the marketing, the representation of the songs.”

To continue the project, Ozment and her counterparts at the other schools are hoping to incorporate the work into a larger effort bringing historic music into the classroom. Ozment hopes they can expand their research to other time periods, and provide both recorded music and analysis to teachers and students at other universities or K through 12 schools.

“As this expands, we are hoping we can share this research with schools, and encourage teachers and students to generate their own responses to the music,” she said. “This music can tell us so much about American history and culture, and so many students can benefit from it.” 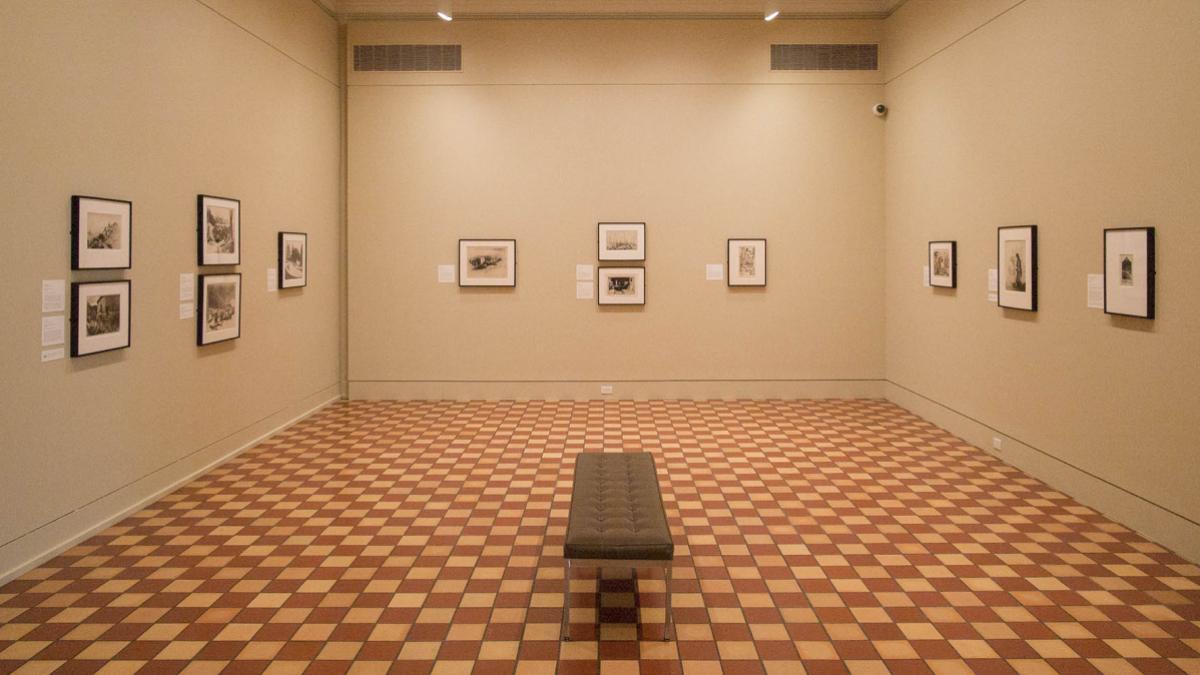 Art in the Trenches: Drawings from World War I’s Soldier-Artists 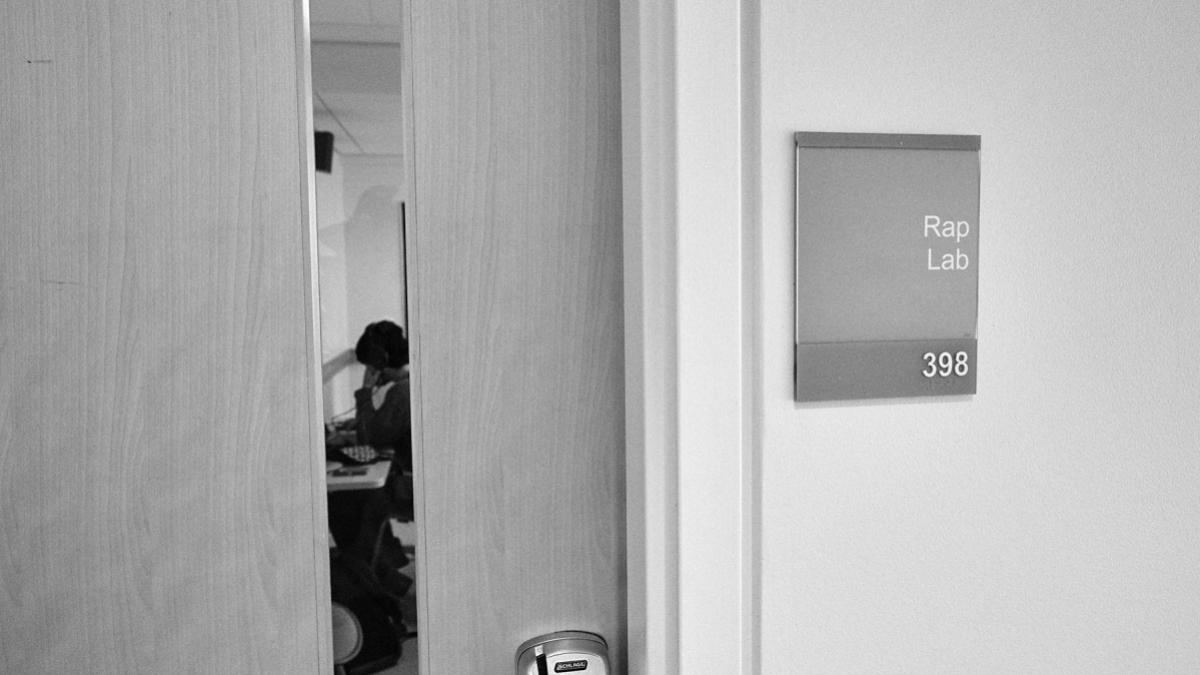