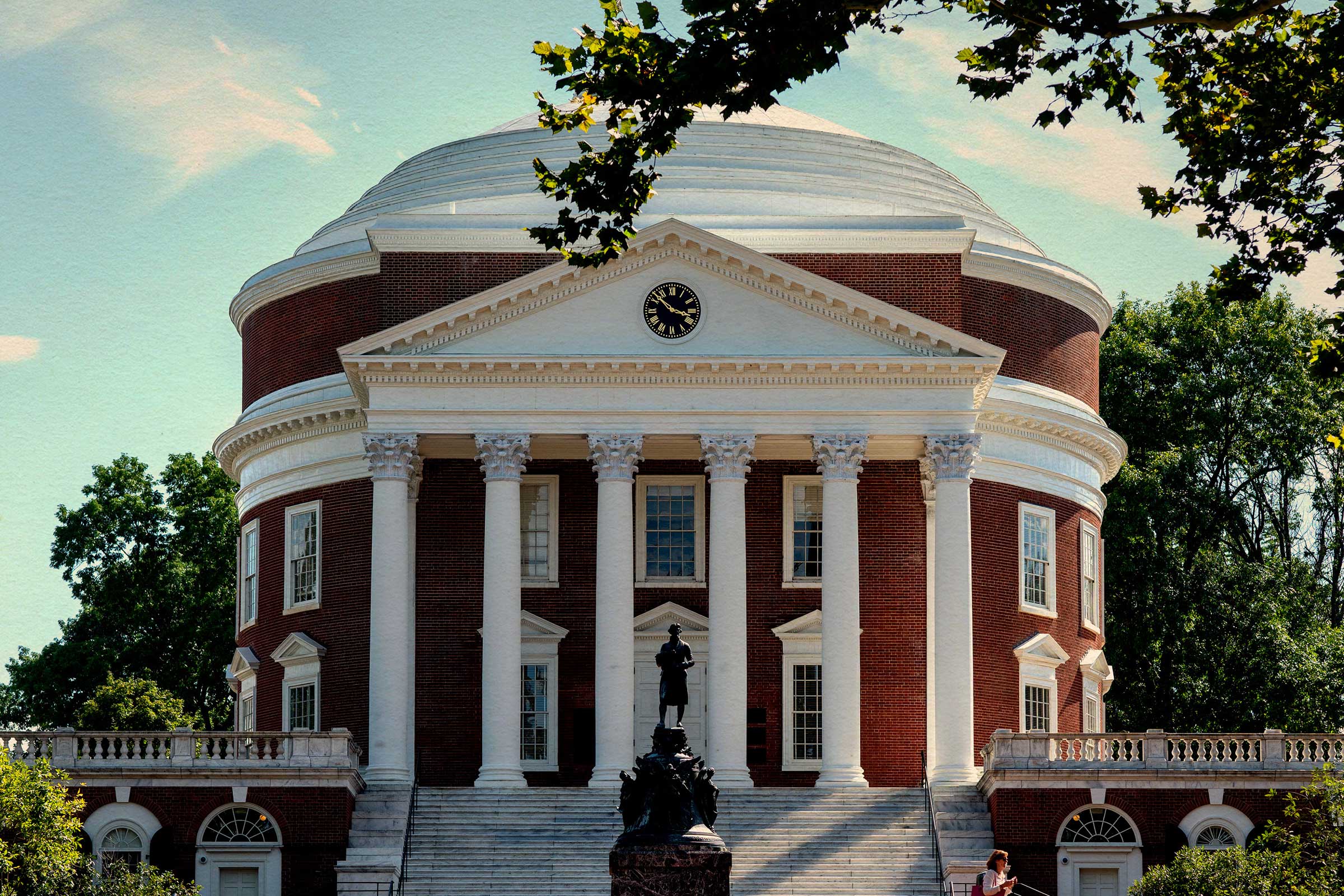 UVA Today this week launches a special series that brings to light the work of those who have researched the role of the University of Virginia during the decades of racial segregation in the 19th and 20th centuries.

These are stories of discrimination and oppression. And they are stories of inspiration and determination. Together, they contribute to the University’s efforts to explore and present a more complete account of its past so that it can better fulfill its values in the future.

The UVA Today series features stories written by faculty authors and by researchers who serve as members of the President’s Commission on the University in the Age of Segregation, or who conduct research as part of the commission’s responsibilities.

Established in 2018 at the direction of then-President Teresa A. Sullivan and supported by President Jim Ryan, the commission complements the findings and recommendations of the President’s Commission on Slavery and the University, which concluded its formal work last year.

For UVA Today, the new series provides an opportunity to support the work of an important University initiative and to bring forward a form of storytelling that differs from its traditional approach of staff-written articles.

“Some of the content will address uncomfortable topics and present difficult facts about the institution during the era of segregation,” UVA Today Executive Editor McGregor McCance said. “Our intention is not to inflame, but to contribute to the University’s commitment to fully and honestly examine that part of its history by sharing stories that come out of this research with our full audience.”

UVA Today interviewed Kirt von Daacke, assistant dean and professor of history; Andrea Douglas, director of the Jefferson School African American Heritage Center; and Louis Nelson, vice provost for Academic Outreach and professor of architectural history, via email to discuss the work of the commission and the UVA Today series. (Douglas and von Daacke co-chair the commission.) They answered collectively.

Q. What’s the mission of the President’s Commission on the University in the Age of Segregation?

A. Our mission is to explore and report on UVA’s history during the era of segregation and examine the enduring legacies of that past, especially as it connects to the Charlottesville-Albemarle community. By design, we are continuing the path-breaking work of the President’s Commission on Slavery and the University by taking that research at least through the century after the Civil War.

In the spirit of the first commission, we are focusing on community engagement, education and memorialization as part of an open process informed by the restorative justice model. This means we are not just telling a more accurate history, but we are telling our shared story as truth-telling and the first step toward atonement.

UVA is committed to telling its own story with the rigor and integrity that we expect of our students. If we wish to be a university that is both great and good, we must be a university that can look clear-eyed at our own history no matter how ugly. Only when we are honest about our past can we look to our future with great expectations. Our students deserve nothing less.

Q. Is the research uncovering facts or stories that have not been told or widely known? Will these stories surprise people?

A. The commission’s first job, as we see it, is to collect all the amazing historical research on UVA and the Charlottesville-Albemarle area that’s been done over the past couple decades and to concentrate that research in a single location. Some of the necessary research has already been done by faculty and graduate students who were at UVA well before the commission was founded.

As well, so much work has been done by community members and organizations in the past few decades. Our job is first to collect as much of that existing work and begin to stitch it all together in telling multiple complicated and interconnected stories that change our understanding of UVA and its past.

We are doing that work now and will also fill in the research gaps as necessary. Many of our institution’s difficult stories have indeed been told, but UVA has not promoted that work publicly as part of a truth-telling project until recently. We do think that many people will find the history we uncover and share surprising; we all have a lot to learn about the history of our institution from the Civil War to the modern era.

Q. Who is doing the research, and where are they obtaining most of the records?

A. As we begin our new research effort, we recognize that we stand on the shoulders of so many previous scholars who have engaged this history over recent decades. The bulk of the research material is hidden in plain sight in our own archives – thousands of pages of University records, student publications, journals and letters written by those who were here, and also a host of community publications.

There is also a great wealth of knowledge in the community. There are two robust genealogy groups in the city – the Central Virginia Historical Researchers, and the Burke, Brown Steppe Afro-Genealogical Society – that have added a great deal to our understanding of Charlottesville’s post-Emancipation history.

Q. Is UVA’s effort through this commission similar to that of other Southern schools that are coming to terms with their history in the period between the Civil War and the civil rights movement?

A. Yes, and this is in part thanks to UVA’s leadership. The President’s Commission on Slavery and the University founded in 2015 an informal consortium of Virginia colleges and universities interested in studying slavery. In 2016, that small group expanded when Georgetown University joined. The group became a formal UVA-led organization known as Universities Studying Slavery that has since grown to include more than 50 schools in five countries, all of whom are examining slavery and racism in their institutional pasts. The new commission continues to lead and expand that consortium as we move forward with our own work coming to terms with a difficult past.

Q. How will telling these stories help UVA become a better university?

A. As Baptist minister and former Southern Christian Leadership Council leader Fred Shuttlesworth once said, “If you don’t tell it like it was, it can never be as it ought to be.”

To do that, to tell it like it was, we must focus on UVA’s educational mission and the commission’s charge to educate; that’s a key to what we are doing. UVA is, and should always be, a living laboratory of learning. That means turning the investigative eye, the microscope, the chromatograph, and other tools of scholarly inquiry onto everything at UVA – the land and soil itself, the built landscape, archival holdings, art and material culture, and the broader Charlottesville-Albemarle community the school has been embedded in for two centuries.

We need to build for ourselves a history that is attentive to context and grounded in historical facts – rather than bathed in reminiscences – and in that way model the excellence of historical scholarship we expect from our students.

We also have been charged with telling a more complete history about the institution, one that includes the wider community, and one that does not shy away coming to terms with difficult truths about UVA’s past. Thanks to the President’s Commission on Slavery and the University’s 2018 report, we already know that during UVA’s first 50 years, slavery and white supremacy were features of the school. We should not be surprised by the continuation of that history after 1865.

We are in search of historic truths that suggest the way in which the University has grown over the course of 150 years. The University today is clearly a very different place than the University of 1865, or 1900; our work will also reveal how those changes came about, and who were some of the key actors driving change at UVA in the decades since World War II, if not earlier. If we want UVA to be as we now think it ought to be, we first have to tell it like it was.

Read the first three entries in the series:

What’s Next for UVA’s Class of 2022? END_OF_DOCUMENT_TOKEN_TO_BE_REPLACED