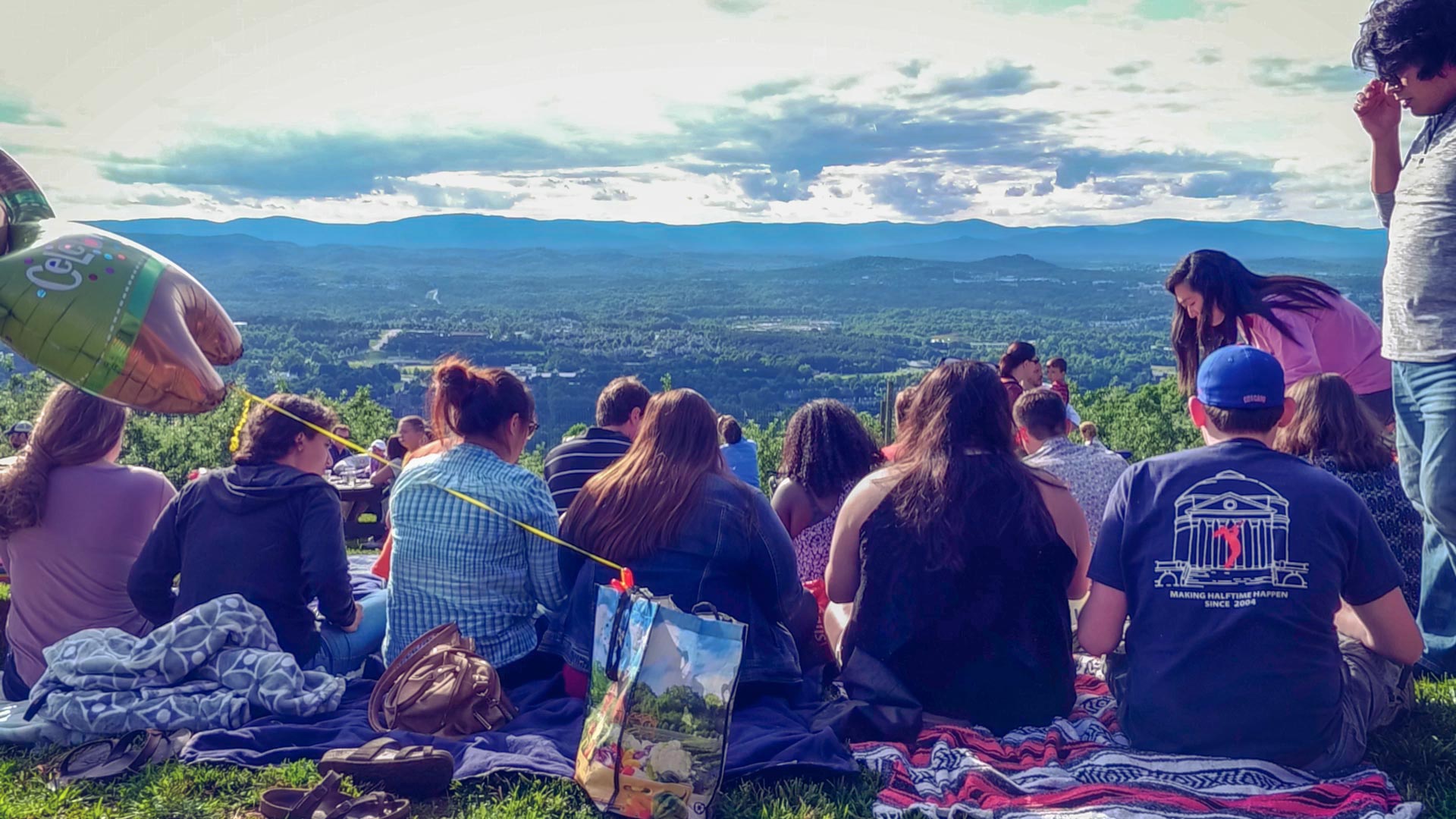 There is a good reason – in fact, there are many good reasons – that ’Hoos have loved to call this place home for 200 years.

The geography speaks for itself. Charlottesville and the University of Virginia are right in the heart of the Blue Ridge Mountains, and everything from swimming to skiing is only a few miles away.

But the more than 200,000 people living in Charlottesville and its surrounding areas truly make those beautiful mountains come alive. They hail from all corners of the commonwealth, the country and the globe. They come to this corner of the world to seize its opportunities and stay to enjoy its vibrancy and livability.

As Vice Provost for Academic Affairs Archie Holmes comments in the video above, “The cultural scene here is way bigger than something a town of this size should have.

“There is always something happening,” he said. “The riches of that are fantastic.”

It’s not a perfect place, certainly. One need look no farther than the white supremacist rallies on Aug. 11 and 12 to realize that Charlottesville and UVA cannot – and should not – remain untouched by the political and social divisions that have dominated national discourse.

But Charlottesville, with all of its charms and challenges, is home.

Watch the video and check out the list below to see just a few things that make this city so special to the thousands who live here and the thousands more who have walked these Grounds over the years.

The City of Charlottesville has more than 25 parks and trails for students and residents to enjoy, including the 20-mile Rivanna Trail that winds through the city and along the Rivanna River.

Of course, there are many more options beyond city limits. Shenandoah National Park alone features more than 500 miles of hiking trails, and the famous Blue Ridge Parkway is a great starting point for scenic drives and hikes. When the temperature drops, Wintergreen Resort, just 43 miles from Charlottesville, becomes a destination for skiing, snowboarding, tubing and ice skating.

In addition to the students and professionals who travel to Charlottesville from around the world, the city also hosts thousands of refugees. Charlottesville is one of the American communities chosen by the International Rescue Committee to receive refugees fleeing crises in their home countries. The city has welcomed more than 3,500 refugees from 32 countries since the local IRC office opened in 1998.

Many UVA students help refugees settle into their new home with programs like “Bridging the Gap,” a mentoring program through UVA’s Madison House, which partners with more than 160 charity organizations in the Charlottesville community.

The pedestrian Downtown Mall has been called “Charlottesville’s public living room,” and features more than 120 shops and 30 restaurants, along with several theaters and music venues. On any given night it is bustling with locals, tourists and students strolling along the bricked streets and visiting shops and restaurants.

Charlottesville has more than 2,400 businesses with 500 or fewer employees, according to a 2016 Virginia Employment Commission study. The majority of those – 1,337 businesses – have just one to four employees.

Charlottesville ranks among the top 15 cities in the country in restaurants per capita, a list that includes far bigger metropolises like New York City, San Francisco and Seattle. There is something for everyone, and often menus feature produce, meat, cheeses and other foods produced by local farmers. Many favorite local restaurants and bars are owned and operated by UVA graduates, such as popular salad shop Roots Natural Kitchen or, for those 21 and over, Random Row Brewery.

Charlottesville is home to approximately 40 wineries, breweries, cideries and distilleries, and that number seems to increase each year. The Monticello Wine Trail has emerged as a prominent destination for both locals and tourists, and many of the wineries have become known not just for their wines, but for the concerts, food festivals and other events they host on their beautiful premises.

Artists from Georgia O’Keeffe to Dave Matthews – who recently organized the star-studded Concert for Charlottesville – have called Charlottesville home, as have authors from William Faulkner to John Grisham and UVA’s own former U.S. Poet Laureate Rita Dove.

Charlottesville is also home to the Virginia Film Festival, which screens hundreds of films each year with some of Hollywood’s biggest stars as guests, and to the Virginia Festival of the Book, which attracts more than 20,000 eager readers annually. The Tom Tom Founders Festival, an art and innovation festival in the style of South by Southwest, is yet another highlight on the city’s calendar. Last year’s festival featured more than 70 bands, 400 speakers and 400 community organizations.

Charlottesville itself is a classroom, with abundant reminders of the powerful role the city and the Commonwealth of Virginia have played in American history. The University’s Academical Village, together with Thomas Jefferson’s home, Monticello, are listed together as a UNESCO World Heritage Site, noted for extraordinary historical and architectural significance.

Organizations like the President’s Commission on Slavery and the University are hard at work researching these sites and the enslaved men and women who built them, striving to provide a more complete picture of Charlottesville’s history.

Netflix to Add Ads. Why This Could Be a ‘Game-Changer’ for Your Viewing Experience END_OF_DOCUMENT_TOKEN_TO_BE_REPLACED

What’s Next for UVA’s Class of 2022? END_OF_DOCUMENT_TOKEN_TO_BE_REPLACED