What Can You Learn from UVA’s First Female Law School Dean? A Lot 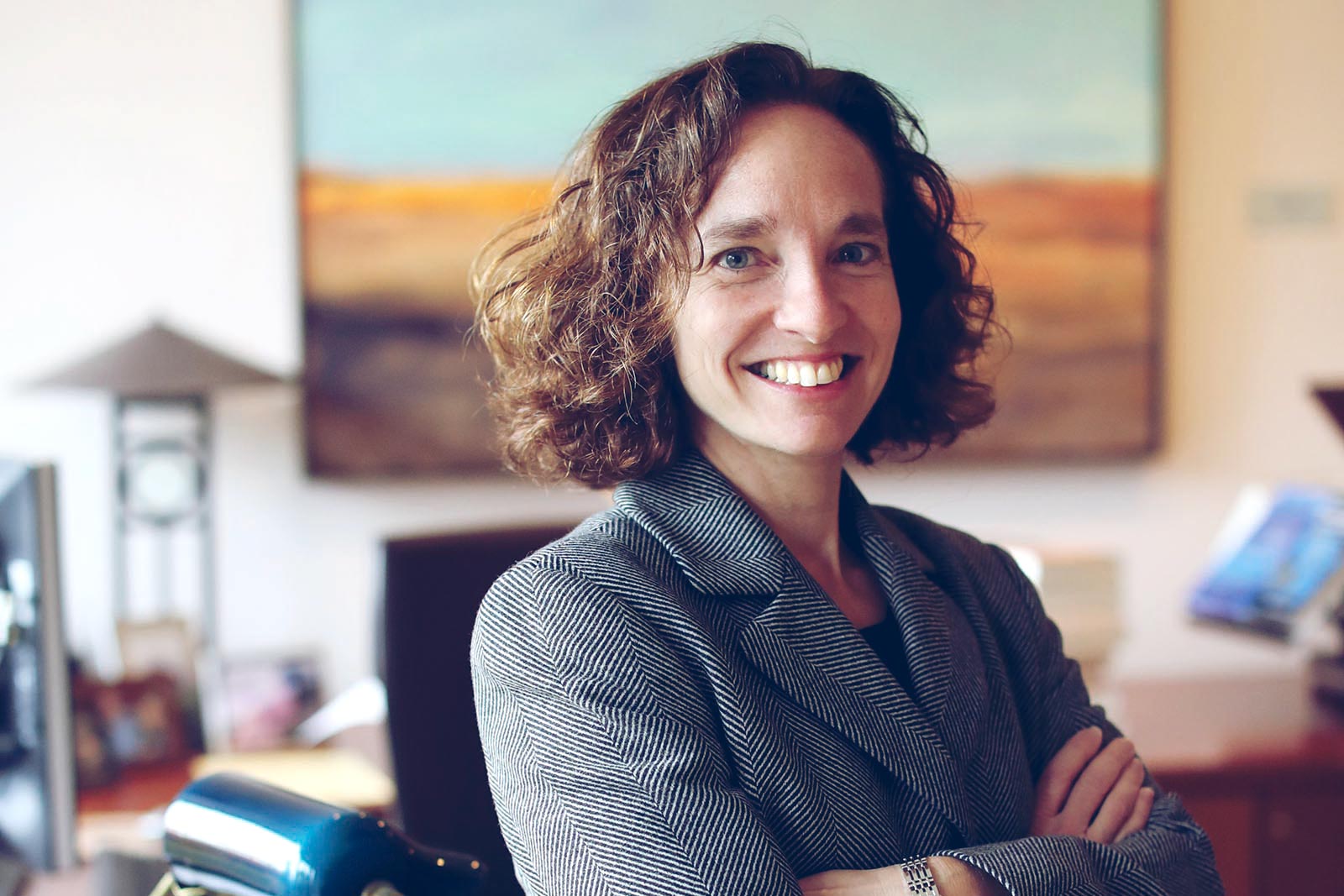 Just a few weeks into her new role as dean of the University of Virginia’s School of Law, Risa Goluboff rewrote one of the most famous lines in law school history.

“Look to your right. Look to your left,” Goluboff told first-year students at this year’s orientation, beginning a line that normally ends with a gloomy prediction that some students will drop out. Instead, she continued, “These are going to be your friends, your colleagues and your networks.”

Goluboff is setting the stage for students – and the world – to understand what’s special about being educated at the University of Virginia School of Law.

She began her new role as the school’s 12th dean in July, a job she repeatedly describes as a “privilege,” after serving on the school’s faculty for 14 years.

Since then, Goluboff has delivered her first “State of the Law School” address to the school’s administration and staff, hosted her first faculty lunch and spoken at her first alumni event. “Every one of these opportunities renewed the appreciation and affection I feel for the Law School,” she wrote in the “Dean’s Message” in the latest issue of UVA Lawyer.

“UVA is unique in its diversity – in people’s viewpoints, politics, ideology, where they come from; in race, gender, sexual orientation and ethnicity,” she said in a recent interview. “It’s a challenge in any institution to maintain community, collegiality and dialogue in the face of difference. If you asked anyone in this building, they would say that’s what we try to do, and that we succeed unbelievably well.”

Goluboff’s credentials are hard to match. She earned an undergraduate degree from Harvard University, a J.D. from Yale Law School and a Ph.D. in history from Princeton University. She clerked for Judge Guido Calabresi of the U.S. Court of Appeals for the Second Circuit and for U.S. Supreme Court Justice Stephen G. Breyer. She has written two books recognized as significant contributions to civil rights and legal history, “The Lost Promise of Civil Rights” (2007), which received the James Willard Hurst Prize and the Order of the Coif award for best book in the legal field, and “Vagrant Nation: Police Power, Constitutional Change, and the Making of 1960s,” published in 2016. Her additional honors include UVA’s All-University Teaching Award, a Guggenheim Fellowship, a Fulbright Scholarship and a fellowship from the American Council for Learned Societies.

Now that her role at the school has changed, Goluboff has shifted from often starting her mornings writing alone to frequent meetings with the UVA Law community. She traveled across the country to meet with alumni this fall.

“I was a happy scholar, but I’m an extrovert, so I’m happy to have days full of meeting and talking with people,” she said.

One of the things that makes her happiest, she said, is having a sense of ownership of the community.

“They’re all my students now, and they’re all my alumni,” she said. “I am so proud to call the UVA Law family my own.”

As the University’s bicentennial approaches, the Law School is gearing up for a capital campaign that will focus on student scholarships and financial aid. Blair Wimbush, a 1980 alumnus and chair of the Law School Foundation’s Board of Trustees, said he’s happy to have Goluboff at the helm.

“We know that resources geared directly toward making legal education affordable for the best students in America is important, and Risa will play a significant role in allowing us to address that,” he said. “The dean plays the critical role in that because she will provide the link between all of the folks aligned in support of legal education at UVA – the faculty, the students, staff, the central administration and alumni all interact with and through the dean. Having someone who’s smart and warm and engaging doing that is a great asset for ensuring we can make that happen.”

“I’m delighted she’s dean,” Breyer said. “Risa was a wonderful law clerk. She’s highly intelligent, she is filled with energy, she likes people and is interested in what they think, and she is lots of fun – she has a good sense of humor. I’m sure she will be an excellent dean,” he said.

Calabresi, who served as dean of Yale Law School for nine years before becoming a judge, said Goluboff “is unusually suited for the job.”

“Risa is an absolute powerhouse,” Calabresi said. “She looks small, as though the wind would blow her over, but she can stand up to any hurricane, anywhere. She is as smart as any clerk I have had, and I’ve had an extraordinary number of clerks who have gone on to quite remarkable things. Risa ranks at the very top of them, and she combines this powerful mind with a degree of charm and care for other people which makes her exactly right to be a dean. She is a true intellectual, and she understands what it means to do scholarship and to study, so she is somebody who can be sympathetic to students and to faculty alike,” he said.

Former Dean John C. Jeffries Jr., who chaired the search committee for the new dean, said there were several strong candidates for the deanship, but Goluboff stood out “because of her national reputation as a scholar and because of her lively and engaging personality.”

“She will be a strong voice in representing the Law School’s interests, both within the University and across the nation,” Jeffries said.

What Is the ‘4th Side’? END_OF_DOCUMENT_TOKEN_TO_BE_REPLACED