On the Wings of Dragonflies: Engineer Explores the Secrets of Insect Flight 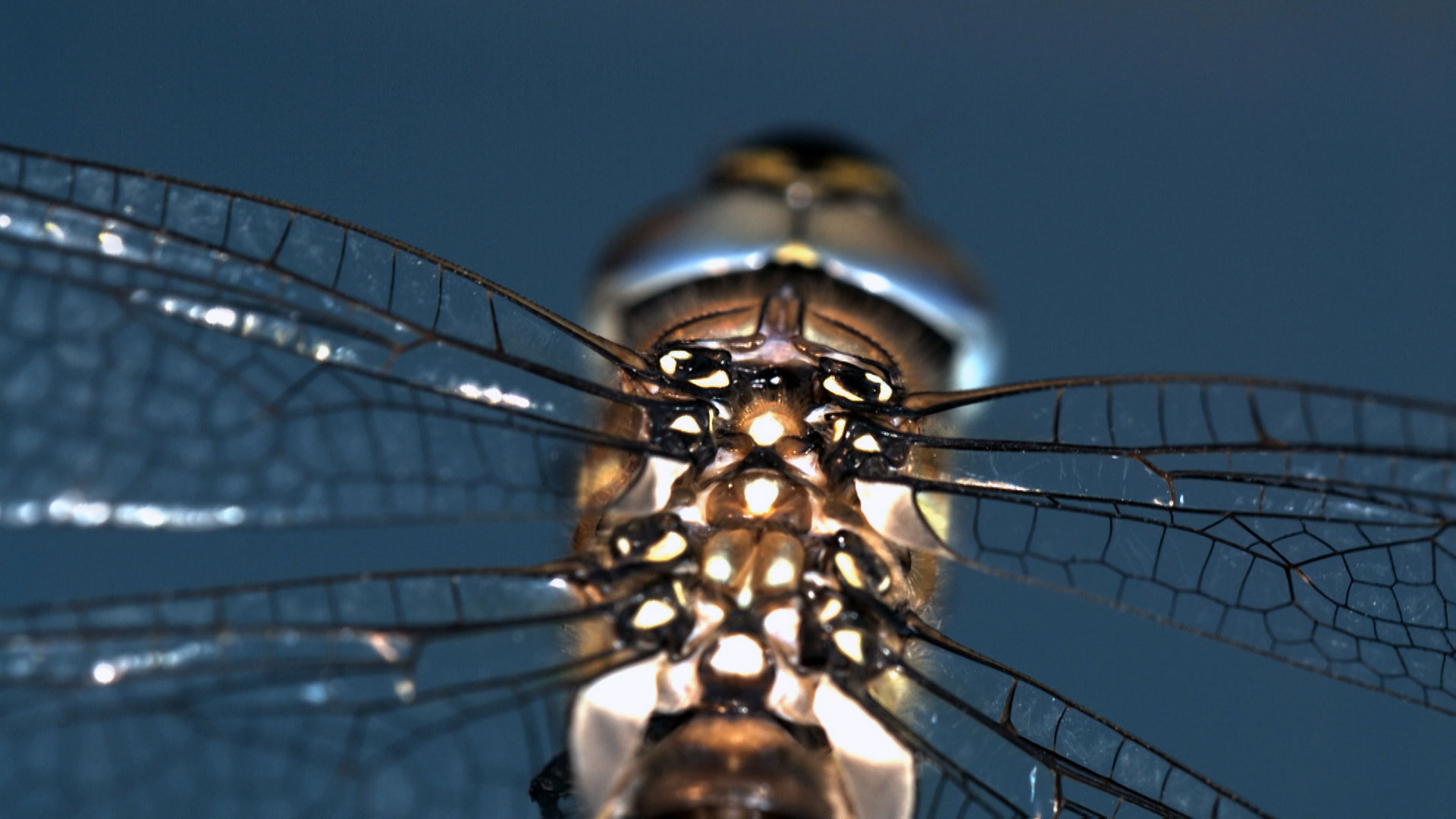 When Charlottesville buzzed with the sound of 17-year cicadas, University of Virginia Mechanical and Aerospace Engineering Associate Professor Haibo Dong led members of his Flow Simulation Research Group into the woods near the University Dell. There they waited, butterfly nets in hand, to capture a few members of the swarm to take back to their laboratory at the School of Engineering and Applied Science.

Their hunt was part of Dong’s larger effort to understand how insects use their flexible wings to fly.

Because insects move their wings so rapidly, even the most observant entomologists don’t fully understand the sequence of movements – and the associated deformation, or temporary change in shape, and rotation of wings – that produce flight. Most lack the background in fluid mechanics to understand how motion and wing structure are translated into lift. But by combining a series of cutting-edge technologies, Dong and his students are shedding light on this mystery.

Much of Dong’s work has been done with dragonflies, whose flying skills and aerodynamic form have been honed over 300 million years of evolution. These highly efficient insects can propel themselves in six directions – upward and downward, forward and backward, and side to side – and sustain bursts of speed of 30 mph.

The emergence of the cicadas gave Dong and his students an alternative to the sleek dragonflies.

“Cicadas are interesting to us,” Dong said, “because the ratio of their payload – their body mass – to wing mass is so high. We would like to know how they manage their flight.”

Their analysis revealed that the cicada has evolved wing motions that use its body’s drag wake for aerodynamic benefit. “We also hypothesize that cicadas use their legs during takeoff, unlike dragonflies, which cannot walk very well,” said Ruijie Zhu, an undergraduate in Dong’s laboratory.

Integrating A Suite of Sophisticated Technologies

At the heart of Dong’s lab is an insect-scale video studio that features three remarkable video cameras capable of capturing 1,000 black-and-white frames per second at a resolution of 1,024 x 1,024 pixels. The cameras are aimed along the three principal coordinate axes and the images are combined to produce three-dimensional images of insect flight that can be slowed.

Dong’s group then uses three-dimensional reconstruction techniques from computer graphics to convert these images into computer models of the insects in flight that include their body trajectory, wing kinematics and deformation. Their methods are detailed enough to include such surface features as the veins that provide the underlying frame for the insects’ wings.

Finally, they use in-house computational fluid dynamics tools to compute and visualize the vortex formation and wake structures so that they can begin to appreciate how motion translates into flight.

Understanding Nature to Improve on Nature

Dong is using his knowledge of dragonfly flight to build a micro-air vehicle, a tiny, highly maneuvering robot.

“We want to learn from flexible-winged flight in nature so that we can optimize vehicles for specific purposes,” he said. Among other issues, this means designing the most appropriate controls and actuators and finding the right combination of materials to approximate the weight, structure and flexibility of dragonfly wings.

“Based on our observations of insects, we’re trying to optimize the wings so we may take advantage of the strain energy and elastic energy stored through deformation,” Williams said.

In the last four years, Dong and his students have created several generations of prototypes of these small, flexible-winged vehicles.

In addition, he is helping biologists understand the mechanical systems that support an insect through its life cycle and provide competitive advantage. By capturing the intricate motions of insect wings and the vortices they create, he is shedding light not simply on how insects move from place to place, but also on how they use their wings to direct and concentrate the airflow over biological sensors, helping them more readily identify airborne chemicals that indicate a food source or the presence of a mate.

In turn, these systems could be incorporated in micro-air vehicles used to detect airborne toxins. It is important to note, as Zhu said, that the collaboration is not all one way. “We begin by learning a great deal from biologists about the differences between species,” he said.

Dong’s students find the attractions of this kind of research – developing and applying new techniques to map uncharted areas – irresistible. “In the mechanical field, many areas of fluid behavior have been observed and studied,” Liang said. “We’re breaking new ground by combining the two disciplines of biology and mechanical engineering.”

Dong’s work has been supported by a National Science Foundation CAREER Award and grants from the Air Force Office of Scientific Research.

Note: A version of this article originally appeared on UVA Today on July 30, 2013.

What Is the ‘4th Side’? END_OF_DOCUMENT_TOKEN_TO_BE_REPLACED