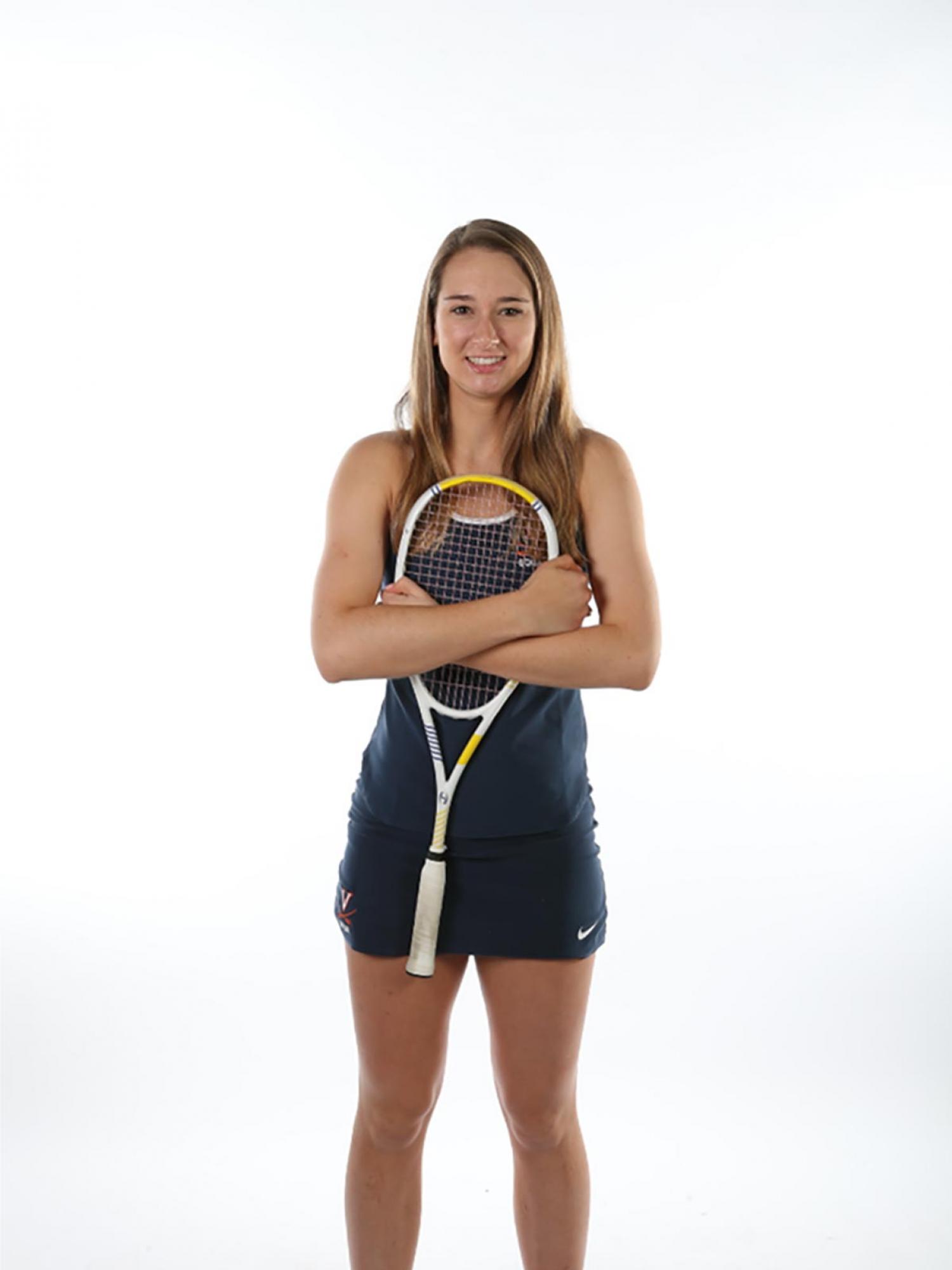 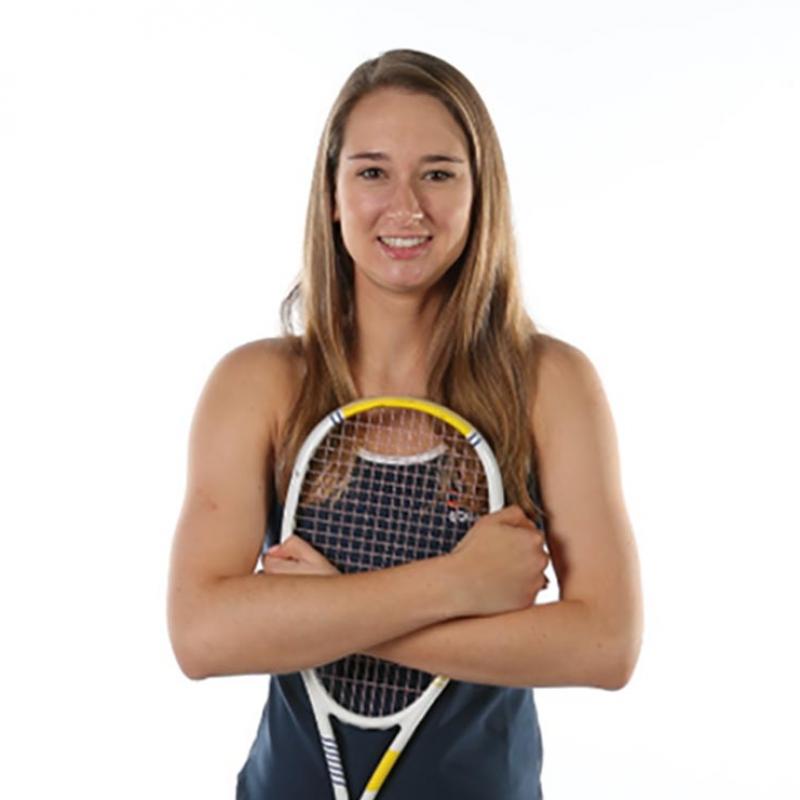 Sarah Doss, a fourth-year student from Richmond who helped lead the UVA squash program to new heights, will look to put some of the lessons she’s learned in her economics major to use in her new job in the affordable housing sector.

With their change in status from a club to varsity level sport three years ago, the University of Virginia men’s and women’s squash teams have been able to attract some of the top players from around the world – including Egypt, Ecuador, Canada, Barbados, Brazil and Hong Kong. 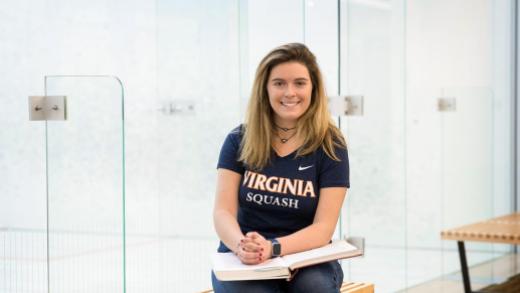 But the Hoos found one of their foundational players right here in Virginia. Born and raised in Richmond, Sarah Doss is the only Virginian in the UVA squash program.

That’s a fact that will make Sarah Doss forever proud.

This year, the fourth-year economics student helped lead the women’s squad to its best season ever. The Hoos posted huge wins over Dartmouth University and Cornell University to finish ranked ninth in the country.

Funnily enough, Doss started out as a tennis player. However, when she was in the fifth grade, she decided – with the support of local coach Patrick Chifunda – to make the switch to squash.

“I liked how squash was more fast-paced and you could be a little more aggressive, where you could hit the ball hard without it flying out of the court – because that had been a major problem for me in tennis,” Doss said with a chuckle. “I just thought it was a better-suited sport for me – and I enjoyed it more than tennis, and it was also something new because not that many people played in Richmond.” 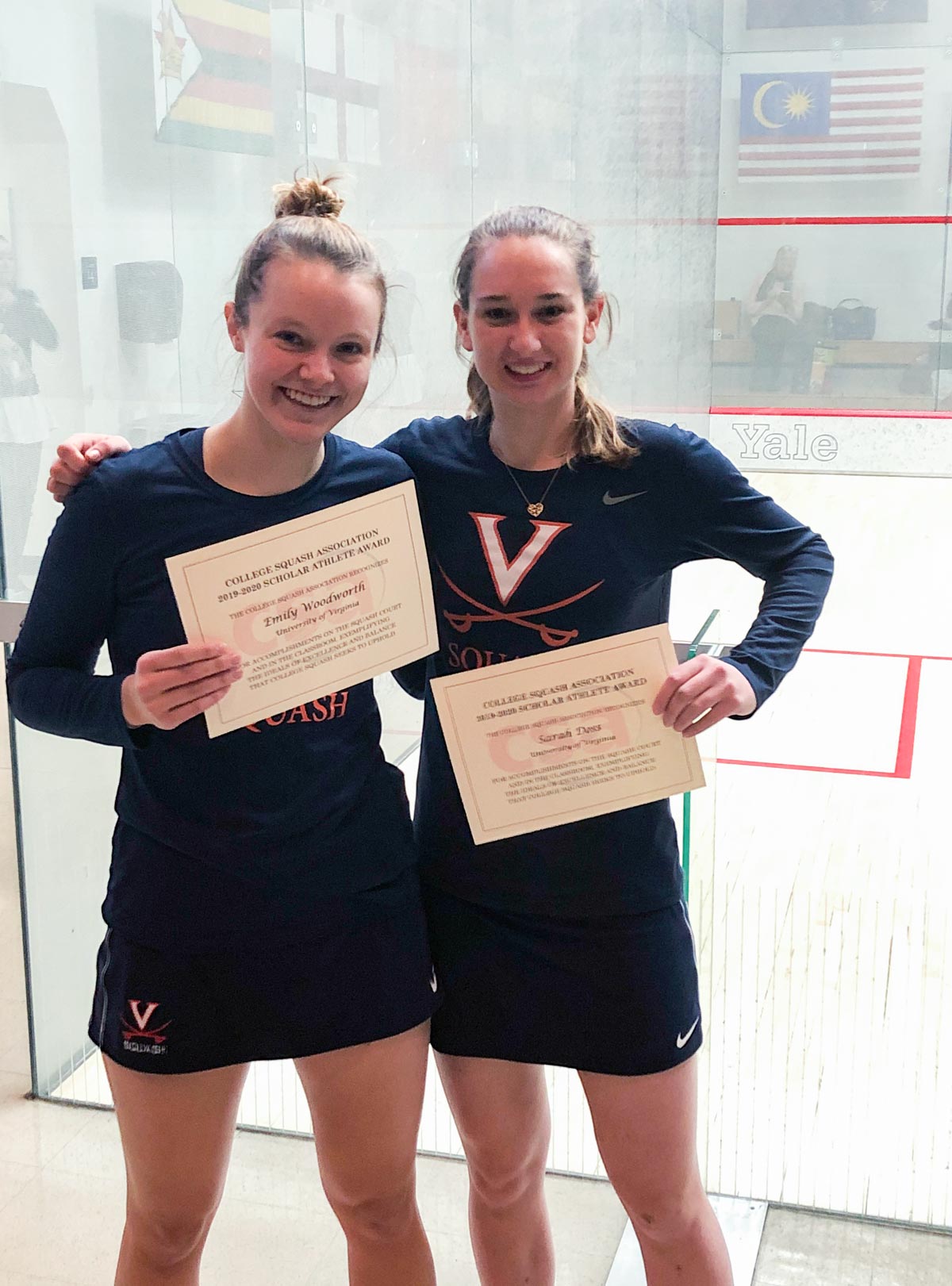 Doss attended Episcopal High School in Alexandria, where she could face strong competition.

As a high school freshman, she began playing against members of UVA’s club team, whom she had gotten to know through the close-knit squash community. It was then that she decided that her goal was to play for UVA.

“Being a Virginian,” she said, “I thought it would be a really cool and unique opportunity.”

Especially since Doss knew UVA had an excellent economics program. She had long desired to go into finance and someday make it a career.

From the get-go, Doss – who entered UVA as part of a six-member recruiting class – showed amazing grit, according to UVA head squash coach Mark Allen.

In a match against a player from Williams College, she chased down numerous balls that looked like sure winners. Allen recalled a parent of another player turning to him and saying, “We’ve got to recruit more players from Virginia!”

“I can honestly say in 40 years of playing and coaching squash, I have never seen greater tenacity out of a player than what I see when Sarah is playing for her teammates,” Allen said. “Sarah will go the extra mile to win any old match. But she will go the extra 10 miles – possibly farther – if there is anything at all on the line for her squad.”

Another Doss highlight occurred last season when, on her 21st birthday, she defeated a player from Brown University who had always been ranked higher than her, dating back to when they were both in high school. In the process, the Hoos notched their first-ever triumph over an Ivy League opponent.

This season, the Hoos beat Dartmouth University in the Kurtz Cup to crack the top 10 for the first time.

With every successful season, Doss said she noticed perceptions change about squash on Grounds.

“A lot of athletes didn’t know what squash was when I was a first-year,” she said, “but as I progressed in years, other athletes started coming up to me asking how our season was going. We’ve shown we belong as a varsity sport with all the rest of the sports at UVA, which has been a great feeling.”

Doss has been just as successful off the court.

In March, she and teammate Emily Woodworth were named College Squash Association Scholar Athletes. The recognition requires student-athletes to have played in the majority of team’s matches throughout their career while maintaining a grade-point average of 3.5 or higher.

“It was hard at times,” said Doss, when asked about balancing high-level academics and athletics, “but I feel like being an athlete absolutely helped me create a schedule and gave me all the resources to be successful. I don’t think I would have been as successful in academics or going through the whole job process if it wasn’t for playing squash at UVA.”

Among Doss’ classroom highlights was her experience as a third-year student in “Theory of Financial Markets,” a class taught by professor Ed Burton.

“It was a great introduction to the financial world and learning important financial concepts,” she said. 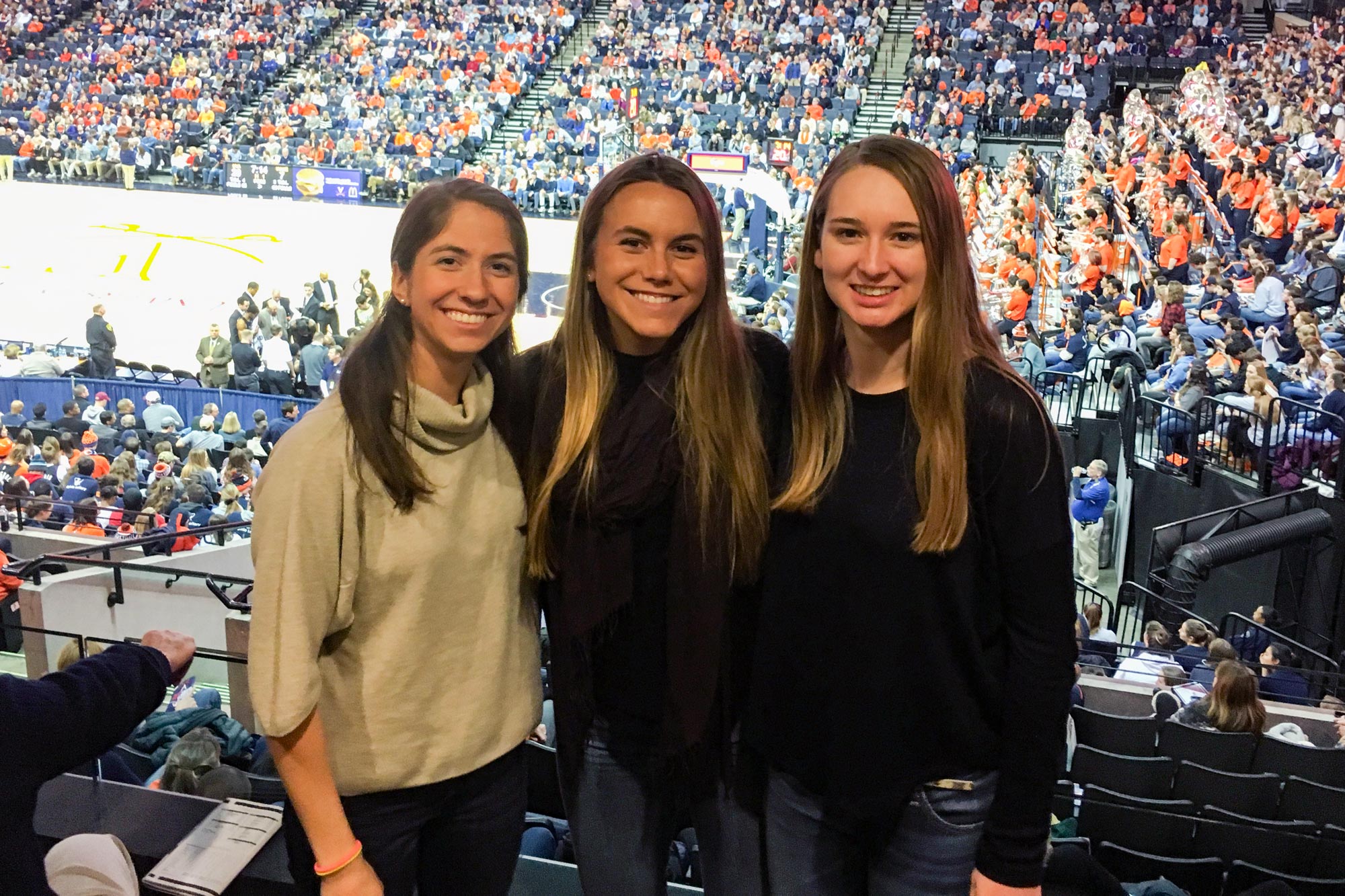 During the quarantine, Doss elected to remain living in an off-Grounds house instead of returning home to Richmond, believing it was the best environment to continue her studies.

As part of a course, “Empirical Industrial Organization,” she wrote a 15-page research paper that revolves around affordable housing and commercial real estate, which is the field she’ll be going into when she starts a position at Wells Fargo next month.

Doss theorized how the oligopolistic structure of the housing market affects the supply of affordable housing and how government policy can help increase the supply.

“It’s probably the hardest and most challenging project I’ve ever had,” Doss said, “but it will be the most rewarding.

“Learning about government intervention and aid that has taken place … [has] allowed me to develop my knowledge of affordable housing and commercial real estate. Affordable housing is such a problem right now, so doing work that helps fix such a huge problem in the United States I think is really cool.”

Allen, for one, can’t wait to see the impact Doss can make.

“With Sarah’s work-hard attitude, I think the only worry I have is not whether she is ready for the world, but a case of whether the world is ready for her,” he said.

Doss said she is thankful for everything Allen and UVA assistant coach Grant White taught her, and for the lifelong friendships she’s formed through squash.

Looking back on her four years, she takes great pride in having helped build the squash program.

“I’m extremely excited to see where it goes,” she said. “There’s so much potential, as we continue to get even more international players who will help take our program to the next level.”

No doubt, a few more Virginians like Doss wouldn’t be a bad thing, either. 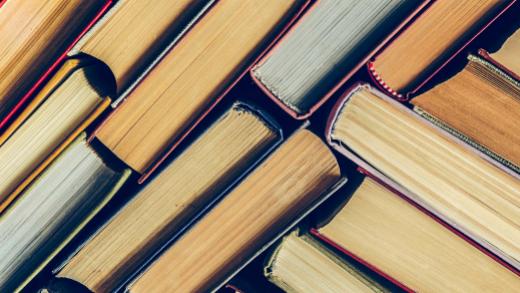 On the Prowl for a Good Book? These Folks From Across Grounds Have You Covered 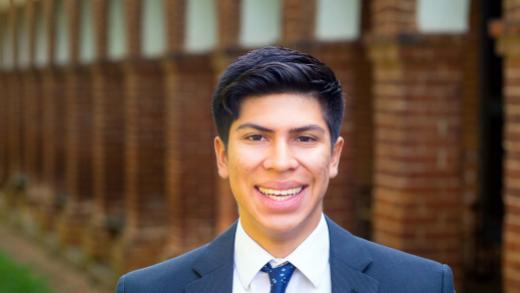 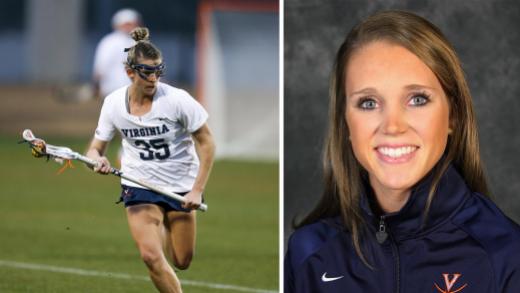