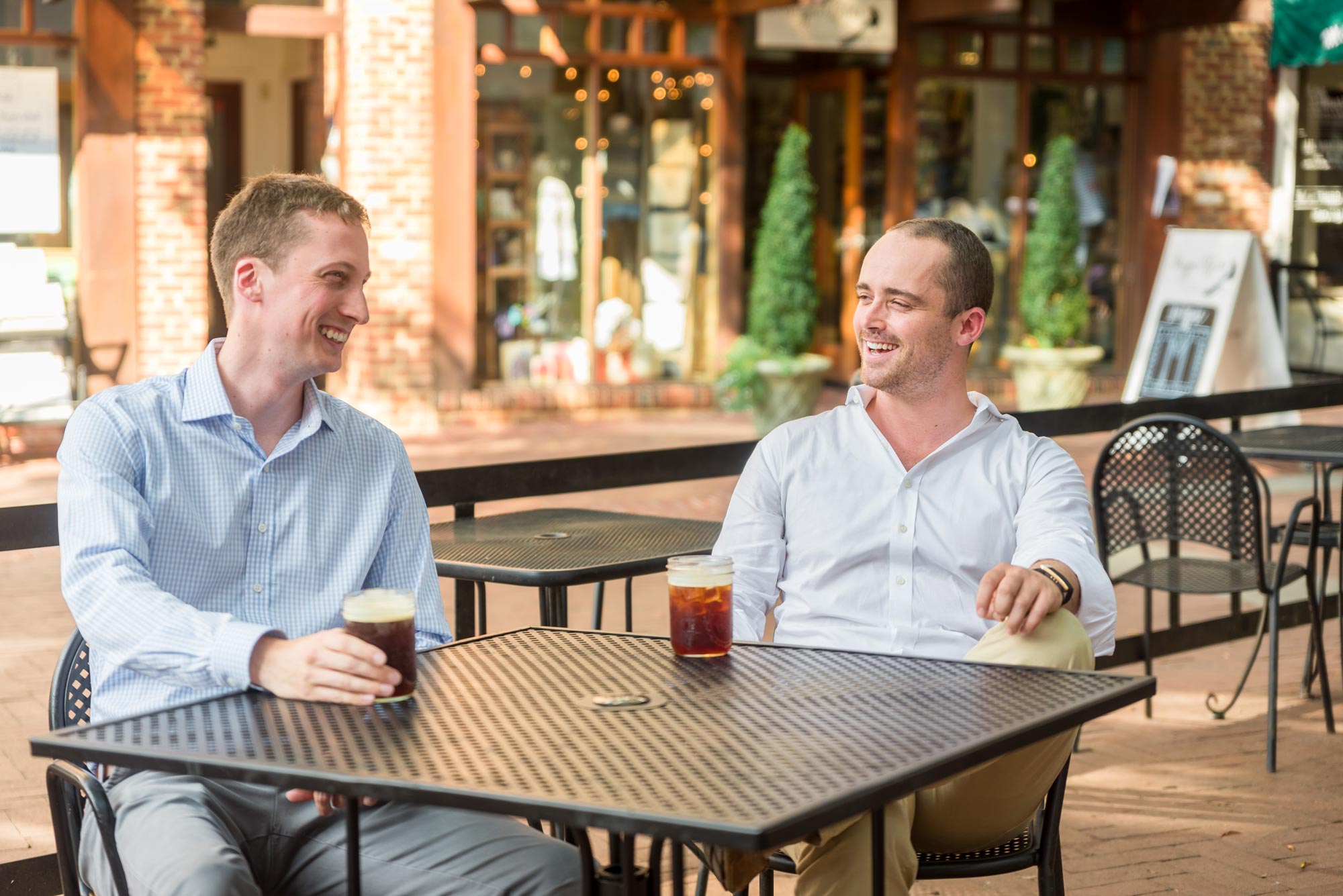 After roughly seven years in the trenches, business for BetterWorld was slow, and the long-term prospects for the platform, which offers a suite of digital fundraising tools, were foggy.

University of Virginia Darden School of Business student Whit Hunter had been working on his nonprofit fundraising startup since finishing his undergraduate studies at UVA in 2013. In the middle of his first year at Darden in 2019-20, Hunter, who started the company with fellow UVA alumni Colin Hunter, his brother, and Ben Yobp, was trying to figure out whether to continue to invest the time and effort into making BetterWorld into a viable business.

Instead of throwing in the towel, the co-founders decided to make a fundamental change in January 2020 that paved the way for a significant turnaround in fortunes: They made the site’s offering free.

“We’ve seen over 100% monthly growth every month for the last year,” Hunter said, 12 months after that crucial decision. “We moved from five new organizations a month to 25, then 100, then 1,000, then 3,000. Since last spring, over 16,000 organizations and nearly 100,000 individuals have signed up to use BetterWorld’s free suite of fundraising tools.”

With business suddenly booming, Hunter, who is attending Darden as a Batten Entrepreneurial Scholar through Darden’s Batten Institute, requested and was granted a year off before starting his second year.

An Echols Scholar as a UVA undergraduate, Hunter carved out his own major on “good business,” or what he described as the paths for-profit enterprises could take to do good in the world.

“What could it mean for a company to be ‘good?’ A lot of the prevailing thought at the time was around the Toms Shoes model of ‘for every one pair of shoes you buy, we’ll give one away,’” Hunter said. “But surely there was more. What about the nature of the product or service? Or how the company treats their employees? Their customers? Their community? These questions were the foundation of my thesis, and BetterWorld was my attempt to put it all into practice.”

The existing charitable-giving market is filled with antiquated, expensive technology, Hunter said, particularly for smaller organizations. Furthermore, these software providers often take a significant cut of donations as their fee. BetterWorld offers individuals and nonprofits a full suite of fundraising tools, free of charge and easy to use, where organizations can keep 100% of the funds raised.

The venture began as an auction platform to serve nonprofits holding fundraisers, and eventually began adding capabilities such as ticketing, a donation portal and crowdfunding tools, among others, as the founders began to learn more about their audience and a potential path forward.

“It was the head of technology and me just building it all over the country, wherever we could live cheaply,” said Hunter. “We just happened to find ourselves in a position, seven years in, where we had these amazing tools.”

The Road to Entrepreneurial Success Passed Through Darden

Before making the decision in 2020 that would alter the trajectory of the company, Hunter first made another significant choice: the decision to attend Darden. Hunter applied to the school, was accepted and earned a Batten Scholarship, which offers tuition awards and provides various programs and services for students with an interest in entrepreneurship, technology or innovation.

“It would have been an impossibility for me to go to Darden if it wasn’t for the Batten Scholarship,” said Hunter. “We were bootstrapping and putting everything into the company, and for Batten to come along and say they were going to take care of everything, and just come and learn, that made it a no-brainer.”

Hunter said the immersive Darden First Year, which brought with it both new areas of study and new friends and opportunities to socialize after seven years building a startup, helped him step back and think about the business and its potential way forward in new ways.

On a practical level, Hunter said courses like “Accounting” taught him how little he actually knew about the field, despite years running a company. Similarly, he credited professor Kim Whitler’s core “Marketing” course with helping him understand marketing on a granular level: How inexpensively could he attract people to the BetterWorld website? How could BetterWorld convert visitors into clients and what is their value?

“All of a sudden, you have a formula you can tweak,” Hunter said. “I went to Kim many times after class, and she helped me completely revise our strategy.”

Hunter said he also took ideas from weekly lunches hosted by the Batten Institute, commiserating and networking with fellow entrepreneurs and listening and learning from Darden professors like Damon DeVito and Saras Sarasvathy. Hunter read Sarasvathy’s seminal book on effectuation as an undergraduate at UVA, and said it was a thrill to have the opportunity to take her class last spring.

Shortly after deciding to make the platform free for users, the coronavirus pandemic struck, and many traditional fundraising venues for nonprofits – think galas and silent auctions – were canceled or truncated. Like Peloton, Zoom or Grubhub, BetterWorld suddenly found itself in the right place at the right time, Hunter said.

“So many organizations had canceled annual events, and were suddenly asking how they were going to fill a significant revenue hole,” Hunter said. “Obviously, the pandemic is horrible and disruptive and we’d rather it not be the case, but we were ready for it. Sometimes luck and timing play a big role.”

Cathie Bennett Warner, a board member on the Napa Valley State Parks Association, said her organization was among those who experienced the potential of the platform firsthand. When the coronavirus pandemic started, the traditional – and critical – fundraising events for the three parks supported by the group, including an annual harvest dinner, were canceled, as were tours and campsite reservations.

“We hit the summer with no plans for revenue to support the parks,” Warner said.

The organization decided to pursue an online auction, and after dismissing various platforms as too expensive or difficult to use, found BetterWorld.

“We tried it, and already we could tell the software was much better designed and way more user-friendly,” said Warner, who said a team of five auction novices soon put together a “beautiful, very workable site.”

The planned September auction, meanwhile coincided with a pair of devastating fires throughout California wine country, which burned through all three parks and destroyed infrastructure and forests. In the final week of the auction, the association added fire protection support to its listings.

“When the smoke cleared – literally – we discovered we had made more money through the auction than through all the live events of the previous year,” Warner said. “And the timing couldn’t be better, because now we had fire recovery on our plate. It was like an angel had watched out for us.”

Post-pandemic, Hunter said he expects many of the practices and habits gained in the past year to stay, with “the efficiency and convenience” of hybrid real-world and virtual fundraising activities now permanent for many organizations. The company is now actively planning for a ramp up in in-person activities and events for client organizations.

The company’s business is booming by almost any measure. The value of transactions completed on the platform grew every month in 2020, and soared past the $1 million-per-month mark by year’s end. The platform saw more than 15,000 campaigns in the final quarter of the year, and thousands of nonprofits are now signing up with the platform each month. Large organizations like USA Cycling and the American Cancer Society are now using the platform to raise hundreds of thousands of dollars and digitally engage with their donors.

Although the tools are free, the company’s revenue has also climbed steadily. For nonprofits opting to use the free tools, donors are prompted to add an optional tip to their purchase to support BetterWorld. Alternately, for $950, the company partners more closely with the client, offering consulting services and “priority support and onboarding.”

The company, which hopes to initiate a fundraising round this year, expects to be profitable in early 2021, Hunter said. BetterWorld remains a three-person team, with the three founders all now devoted full-time to the endeavor. Future growth may require additional key hires, but for now the founders are focused on building the existing platform with the tools available.

“It’s intense. Everything is going up and to the right,” Hunter said. “As exciting as it is to disrupt an industry, the greater joy is serving these organizations, supporting their work, and, hopefully, building a better world.”

It’s Copperhead Season in Virginia. Here Is What You Need to Know END_OF_DOCUMENT_TOKEN_TO_BE_REPLACED

What’s Next for UVA’s Class of 2022? END_OF_DOCUMENT_TOKEN_TO_BE_REPLACED