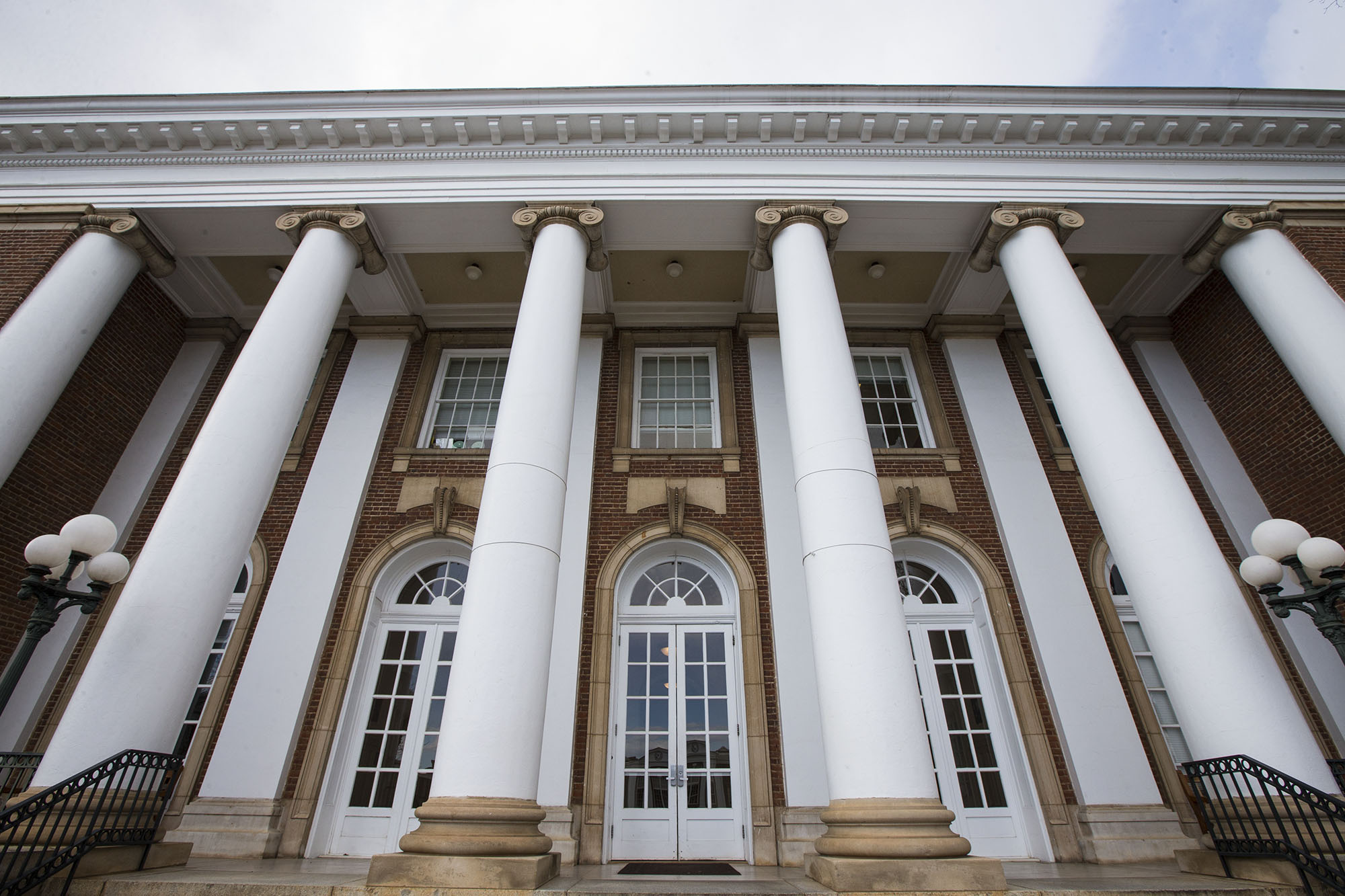 The Woodson Institute was established to supervise the African American studies major and to recruit emerging scholars in Black studies, from local to national to global perspectives. (Photo by Dan Addison, University Communications)

Educating new generations of scholars in Black history and politics. Exploring Black authors like Zora Neale Hurston and Richard Wright. Examining urgent issues, such as the August 2017 violent white supremacist rallies in Charlottesville or mass incarceration and racism in the U.S.

The University of Virginia’s Carter G. Woodson Institute for African American and African Studies is celebrating its 40th year on Grounds, during which it has led the above activities, in addition to creating an undergraduate major and a pre- and post-doctoral fellowship program that’s become internationally known, and developing other educational initiatives and a range of symposia.

The institute will hold a virtual event Thursday featuring a free performance and discussion session with the African American vocal group, Sweet Honey in the Rock, primarily an all-women a cappella ensemble (that now includes a bass player). Robert Trent Vinson, the Woodson Institute’s new director, and English professor Deborah McDowell, the previous director, will give remarks, along with former Woodson Institute fellows.

Vinson said he hopes the virtual event will give more people the opportunity to participate. McDowell had started the planning for the 40th anniversary before the pandemic brought complications, so Vinson said he’s continuing the work she started. 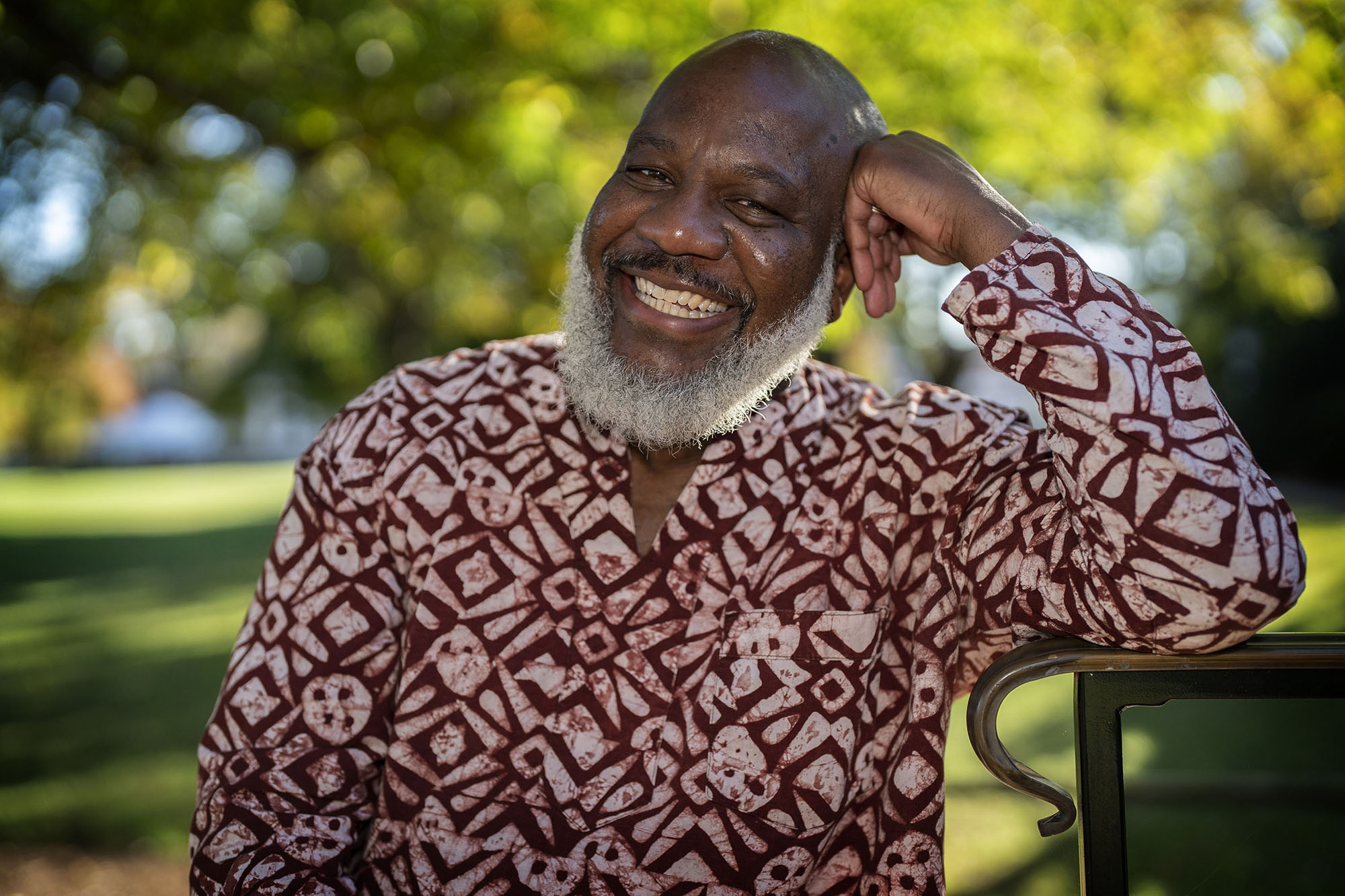 “At 40 years, the Woodson is truly an institution. The institution-building piece is really critical,” Vinson said, “so it survives when leaders transition. The individual and collective efforts of so many people over these past 40 years, particularly our long-time previous director Deborah McDowell, must be honored and celebrated.

“For Black people to create institutions in this nation that has not always been supportive, that’s a difficult thing to do.”

As the new director, he said, “The first thing is to keep the trains moving down the track because the momentum is already there. We’ve got 40 years of good momentum.”

Below are highlights of some projects the Woodson Institute – formally designated a department within the College and Graduate School of Arts & Sciences in 2017 – has established or accomplished in fulfilling its mission “to enhance the research and teaching of African-American Studies in the schools and departments of the University and to establish an African-American Studies Research Center which would make important contributions to scholarship and learning at this major Southern university.”

After the late sociology professor Vivian Gordon led the fledgling Afro-American studies program from 1975 to 1980, the late Paul Gaston, a professor of Southern and civil rights history at the University, who then chaired Black studies, recommended hiring historian Armstead Robinson to lead the program.

The Woodson Institute – named after the early 20th-century historian Carter G. Woodson, who hailed from Buckingham County and established the first Black History Week – opened its doors in 1981. Robinson, who died unexpectedly at age 48 in 1995, established the institute to supervise the African American studies major and also to recruit scholars as Ph.D. candidates and research fellows.

“[The Woodson Institute] put us on the map as a major center for Afro-American studies,” Gaston said in 2006. “Eventually, through using Robinson’s pragmatic technique of setting aside professorships in individual departments for minority recruitment, the black faculty numbers doubled in one year.”

At the time, Robinson faced some resistance from those who wanted UVA to create a department instead of the institute, Vinson said. The institute model, which Robinson knew as a faculty member at UCLA, drew UVA faculty from several departments, as well as attracting young scholars. “This model brought more success and visibility to Black studies at UVA, and when the Woodson also became a department in 2017, both the initial aspirations for an institute and a department were ultimately fulfilled,” said Vinson, who spent a year at the Woodson Institute as a pre-doctoral scholar-in-residence in 1988-89.

Robinson also oversaw the institute’s move from its initial space in a small house on Dawson’s Row (located behind the Office of African American Affairs) to the more prominent Minor Hall on McCormick Road, which held symbolic significance, Vinson said.

Deborah McDowell, the Alice Griffin Professor of English, became the next director in 2008 after serving as the interim for a year, and stepped down this year as Vinson took the position. She remains on the faculty.

As a department, the Woodson Institute administers the undergraduate major and minor degrees in African American and African studies, as well as a minor in African studies and a newly minted graduate certificate. The institute has designed two graduate programs that students can pursue for the certificate: one that focuses on Caribbean culture, and a separate one on Africana studies, which includes Caribbean history.

Robinson’s legacy bears fruit in the institute’s internationally renowned fellowship program. The two-year residency fellowships, at pre- and post-doctoral levels, have supported more than 180 emerging scholars whose cutting-edge research has shaped the field.

The UVA Press has published an institute-backed series of books since Robinson’s time, “Black Studies at Work in the World,” many written by UVA faculty and Woodson fellows. McDowell, Shawn Leigh Alexander and Vinson have served as editors in recent years.

To sum up its outreach mission, according to its website on the 40th anniversary, “the Woodson Institute is committed to engaging local communities in its work, sponsoring training programs for K-12 teachers, creating experiential learning opportunities for high school students, and sharing with the general public the institute’s intellectual research into issues of race, social justice, and inequality as well as the lives and experiences of people of African descent throughout the world.”

Last year, the University, along with the College and Graduate School of Arts & Sciences, made a $16 million commitment to expand support for the Woodson Institute.

Butler established and oversaw significant initiatives, including the Center for the Study of Local Knowledge, supported by a multi-year grant from the Ford Foundation beginning in 2000; and, with the Virginia Center for Digital History, “Race and Place: An African American Community in the Jim Crow South” in 2002, an archive about Charlottesville and racial segregation laws from the late 1880s to the mid-20th century that includes newspaper articles, documents, maps and images.

A recent Woodson research project, supported by UVA’s Strategic Investment Fund, took place from 2017 to 2019, conceived before the white supremacist demonstrators came to town. The Citizen Justice Initiative enlisted student interns from local high schools and UVA, who worked with McDowell and the project’s managing director, James Perla, to create a website, “The Illusion of Progress: Charlottesville’s Roots in White Supremacy.”

The multimedia resource “explore[d] the history surrounding Charlottesville’s Confederate statues to demonstrate how narratives of progress and entrenched fictions of racial difference enable material injustices to take root, suppressing black people’s claims to personhood, citizenship and basic freedoms,” it says in the introduction.

The Citizen Justice Initiative also brought together the past research in the “Race and Place” archive, the Vinegar Hill Project and other sources from the Charlottesville and University community.

Tragic events in 2015, including the murders of Charleston, South Carolina, church members in June, the torching of multiple churches and several police shootings of unarmed Black men, prompted the institute to hold a panel discussion, “Engaging Race: Forum on Race, Citizenship and Social Justice,” the first of a series that focused broadly on race in American society.

Under the Citizen Justice Initiative, the institute spearheaded a podcast series, “Notes on the State,” in conjunction with UVA’s bicentennial celebration. The project sought to address Thomas Jefferson’s history today and to look forward to more inclusive history-telling for the next 200 years of the University’s history.

Throughout the course of the podcast series, more than 10 students took part in experiential learning opportunities related to Jefferson and the history of slavery. This included person-on-the-street interviews, tours of Monticello, and involvement with editing more than 14 interviews conducted over the course of the series.

And in early 2016, about six months after the August 2017 white supremacist violence rocked the local community, the institute offered a series of events focused on the arts, “August in Perspective: Creative Responses.” The program included workshops “designed to foster community, introspection and reconciliation through art-making, focusing specifically on questions related to race, place, violence, history and memory,” McDowell said. She described it as providing a time to pause, breathe and possibly advance the healing process.

Under McDowell, the institute regularly presented symposia and discussions on current issues and influential Black artists. A 2008 event celebrated author Richard Wright, 100 years after his birth; in 2010, a panel paid respect to Aretha Franklin (although her concert in Charlottesville that fall was cancelled); and devoted discussion in 2012 to writer Zora Neale Hurston’s novel, “Their Eyes Were Watching God,” 75 years after its publication. 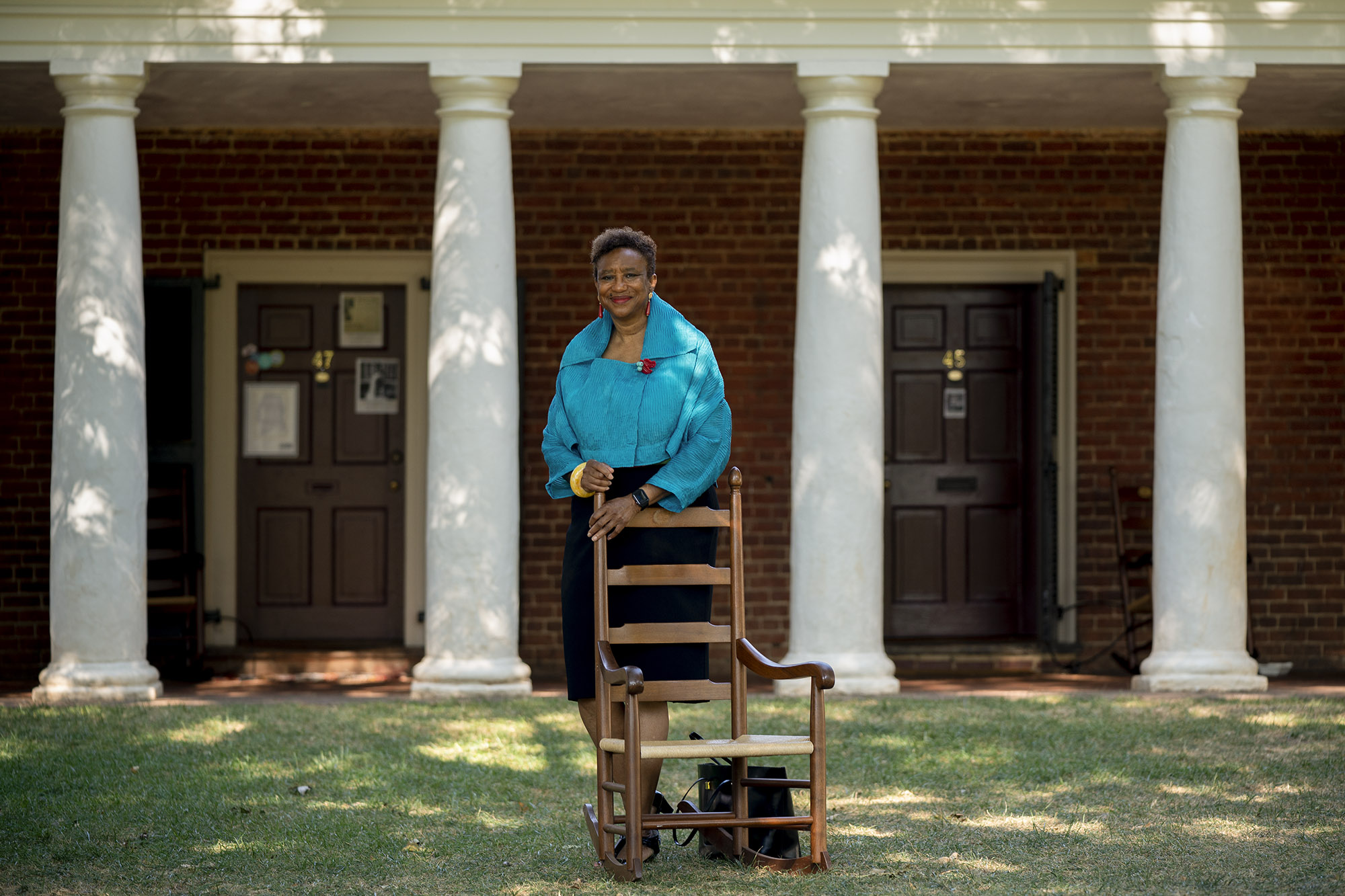 Other topics of panel discussions since 2009 have included the recent film “Judas and the Black Messiah”; Black feminist history; Black girls and social issues; predatory lending; race, wealth and college admissions; and relations between China and African nations.

In 2009, activist and scholar Angela Davis came to Grounds for a weeklong residency and headlined the Woodson conference on “The Problem of Punishment: Race, Inequality and Justice.” The conference resulted in a related book, “The Punitive Turn: New Approaches to Race and Incarceration” (UVA Press), edited by McDowell, UVA history professor Claudrena Harold and CUNY professor and conference participant Juan Battle.

Civil rights icon Julian Bond taught history at UVA for 20 years before retiring in 2012. After he died in 2015, the University established the Julian Bond Professorship of Civil Rights and Social Justice in the College and Graduate School of Arts & Sciences to sustain faculty excellence on the civil rights movement. Historian Kevin Gaines has held the endowed professorship since 2018. In addition, the institute organized a 2018 symposium in memory of the lifelong work of Bond. 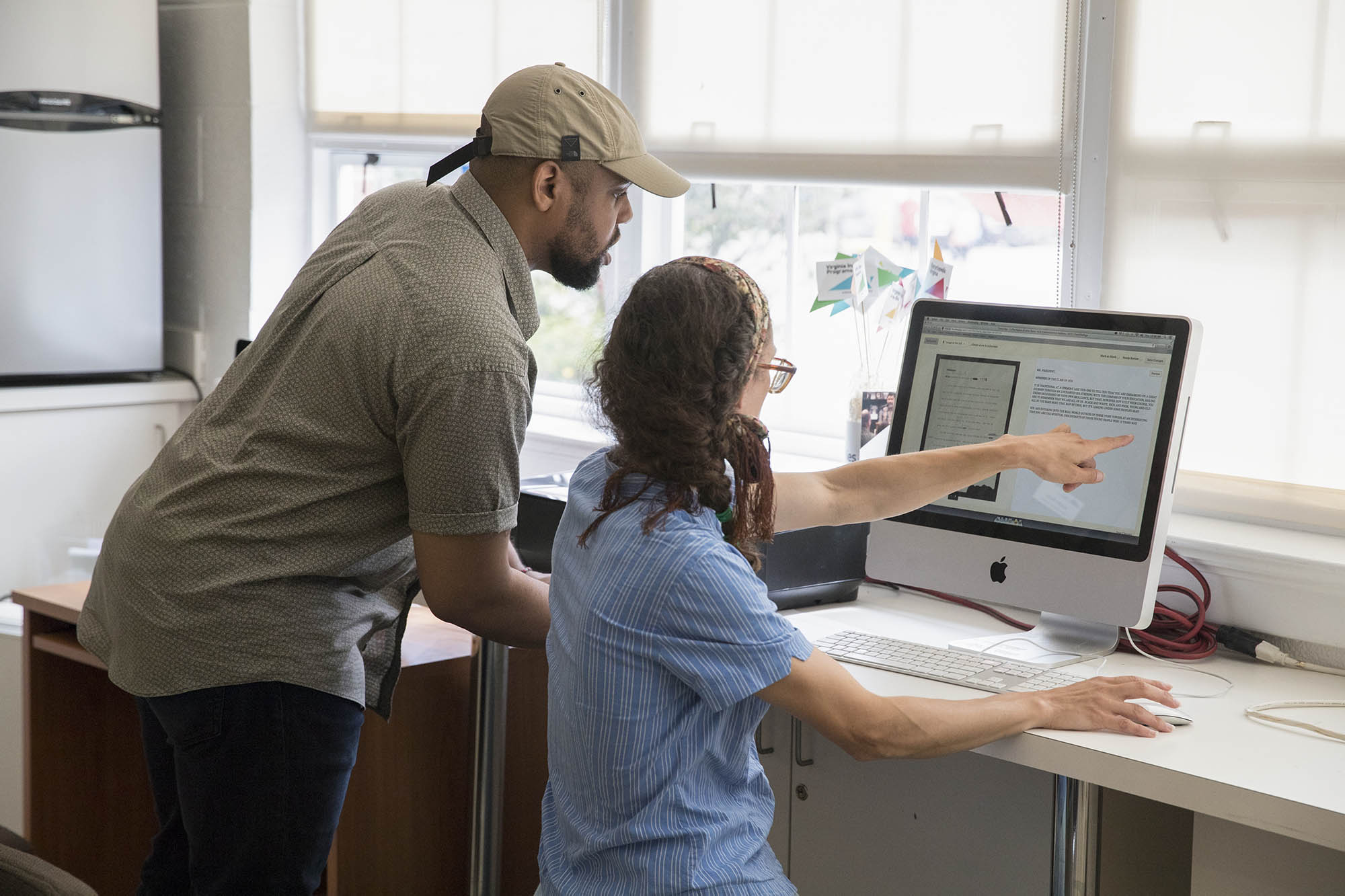 But that’s not all – the Woodson Institute, partnering with the Albert and Shirley Small Special Collections Library, the Center for Digital Editing, the Scholars’ Lab and Virginia Humanities, launched the Julian Bond Papers project in 2018. Two public sessions, #TranscribeBond, that year and in 2019 brought people together to participate in the crowdsourced transcription process. The project recently received extended funding from the National Archives’ National Historical Publications and Records Commission.