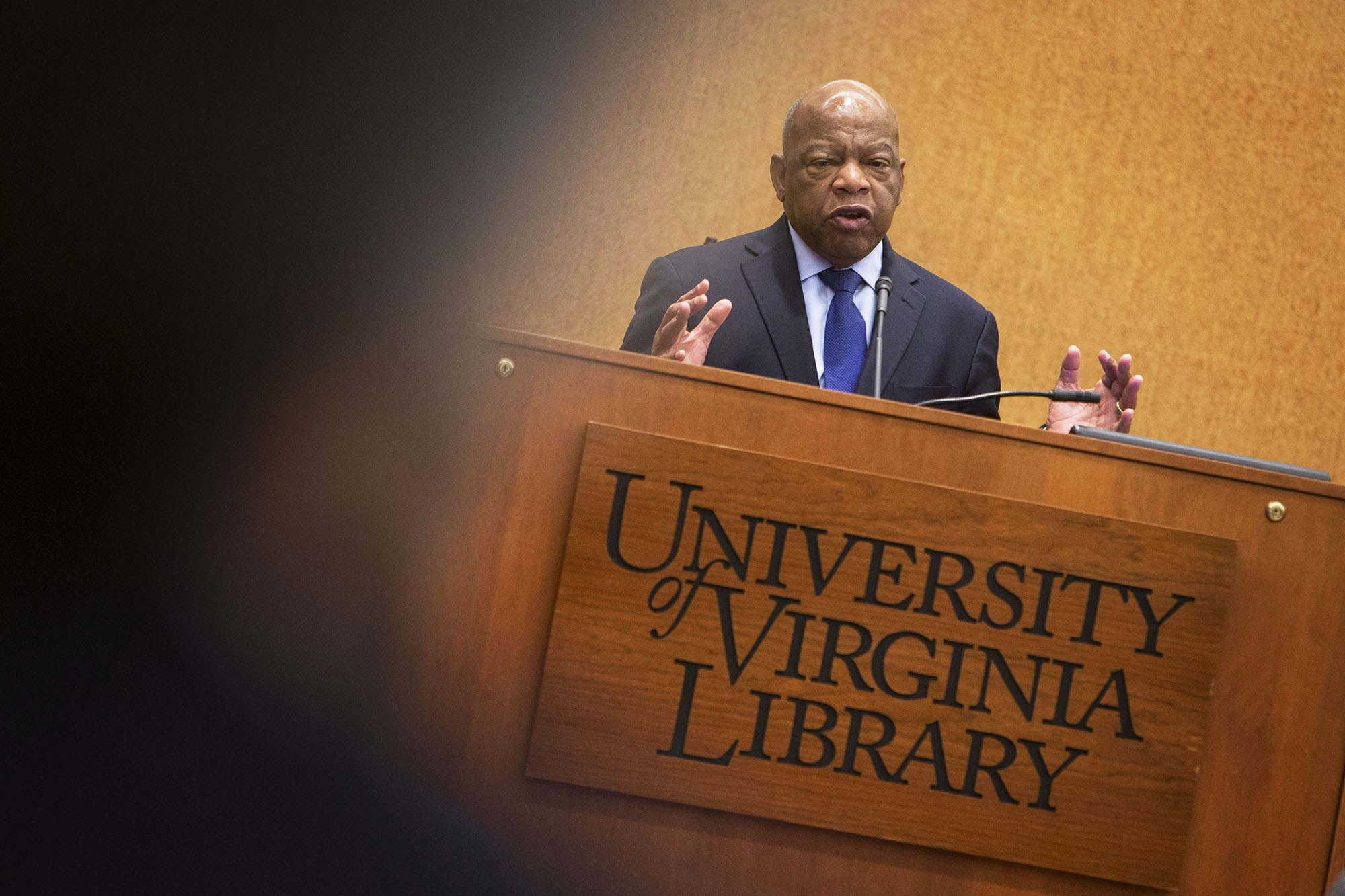 In the decades that he fought for racial equality and civil rights in the United States, U.S. Rep. John Lewis influenced many Americans, from presidents to aspiring activists.

Among them are those whom the late congressman, who died Friday at age 80, inspired and worked with at the University of Virginia. Lewis, a leader of the civil rights movement in the 1960s who was called “the conscience of Congress” by colleagues, spoke on Grounds in 2015 after receiving the Thomas Jefferson Foundation Medal in Citizen Leadership, the highest external honor that the University bestows.

He also collaborated with several faculty members and departments on research and scholarship about the civil rights movement, and, just a few years ago, spoke to UVA students studying the 50th anniversary of some of the protests he helped lead.

Here are just a few examples of Lewis’ legacy on Grounds.

At the time, Allan Stam, then-dean of the Frank Batten School of Leadership and Public Policy, said that Lewis “exemplifies citizen leadership. From his days as a student leader to his cofounding of [the Student Nonviolent Coordinating Committee], he has selflessly served the public good.” 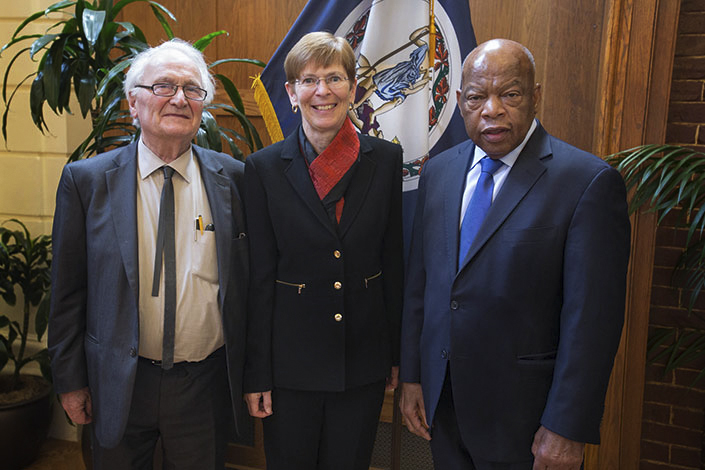 Lewis gave a talk on Grounds as part of the celebration, speaking in the Albert and Shirley Small Special Collections Library Auditorium.

He urged audience members to remember the power of the vote – “The vote is the most powerful nonviolent tool in a democracy, and we have to use it” – and implored them to “be bold, be courageous. … Be a headlight, not a taillight.”

Lewis worked with Phyllis Leffler and the late Julian Bond, both professors emeritus in UVA’s history department, as part of Leffler and Bond’s years-long project cataloguing the formative experiences of Black leaders and leadership characteristics to inspire the next generation.

Leffler and Bond, who like Lewis was a veteran of the civil rights movement, recorded 51 interviews with Black leaders for their book, “Black Leaders on Leadership: Conversations With Julian Bond” and a companion website.

Among the interviews was one with Lewis, whom Bond interviewed on Sept. 26, 2005, in the Congressional Recording Studio in Washington, D.C. At the time, Lewis was in his eighth term representing the 5th District of Georgia.

Bond and Lewis talked about Lewis’ family and the mentors who influenced his life, sit-ins that he participated in, his philosophy of nonviolence and the violence he endured, the connections between his work for civil rights and his personal faith, his relationship with the Rev. Dr. Martin Luther King Jr., and many other topics.

At one point, Lewis succinctly summed up his leadership philosophy for Bond.

“My philosophy is very simple, that you’re only here for a while and you have to do what you can with others to enhance the dignity of all humankind,” he said.

He also called for daring, bold leadership into the future.

“I think in the years to come, the society will need and will be demanding leaders with courage – raw courage. People that are prepared to stand up and do what I call ‘get in the way.’”

Read the full interview transcript and watch the video.

Lewis was also interviewed for the UVA Miller Center’s Presidential Oral Histories program, which has collected oral histories for every presidential administration from Gerald Ford to Barack Obama and completed a special oral history project on Sen. Edward M. Kennedy. The latter project includes 280 oral history interviews, among them conversations with Lewis.

The congressman, interviewed on Dec. 4, 2006, talked about his relationship with the three Kennedy brothers, President John F. Kennedy, Sen. Robert F. Kennedy and Sen. Edward M. Kennedy. Lewis encountered all three during the course of his civil rights activism, and grew especially close to Bobby Kennedy, whom he praised as “just a wonderful human being, a wonderful man. … He had this great sense of passion, and I identified with that.”

Among other events, Lewis recalled meeting with President Kennedy about the “Freedom Rides” – Lewis was among the 13 original Freedom Riders who challenged segregation in the Jim Crow South – and the 1963 March on Washington, which Lewis helped organize. He watched as the elder Kennedy brothers grew more committed to the civil rights movement and, with the rest of the country, mourned when President Kennedy was assassinated. Five years later, Bobby Kennedy met the same fate, and Lewis talked about how both men inspired him to keep pushing for change, and how he worked with their brother, Ted Kennedy, for many years in Congress.

Video Talks With the Next Generation

In 2014, students in Deborah McDowell’s “1963” course were thrilled when Lewis made a video appearance. McDowell, the Alice Griffin Professor of English and director of The Carter G. Woodson Institute for African American and African Studies at UVA, taught the course as part of a series on civil rights history, focused on the 50th anniversaries of five significant years – 1963 through 1968.

Lewis appeared via Skype from his congressional office to speak to the class about his experiences in the civil rights movement and working with King. He talked about planning the March on Washington to give a restless populace a chance at change, but he also focused on present-day issues, including his concern that economic uncertainty and turmoil might handicap young people still fighting for progress.

McDowell said that was one message she hoped her students received.

“Commemorating anniversaries often becomes an excuse for avoiding the urgencies of the present,” she told UVA Today at the time, “so I wanted to make it clear that we are revisiting this period for its relevance to our current lives.”

On Monday, McDowell reflected on what her students and others can learn from Lewis.

“Talking about a person’s legacy can be challenging, especially if that person is as towering a figure as was John Lewis” she said. “He lived a complex life, during which he said and did some things that deserved to be decried (and were), but we can derive one part of John Lewis’ legacy from his lifelong commitment to the Black freedom struggle.

“For those who remain in this struggle – students and non-students alike – he exemplifies what all freedom-loving people know in their bones: the struggle is never finished. The torch now passes to them, to us.”

Read more about Lewis’ visit with the class.

Ahead of Thanksgiving, Hoos Look Back With Gratitude END_OF_DOCUMENT_TOKEN_TO_BE_REPLACED

The Cavalier Marching Band Marches On – Even When Apart END_OF_DOCUMENT_TOKEN_TO_BE_REPLACED