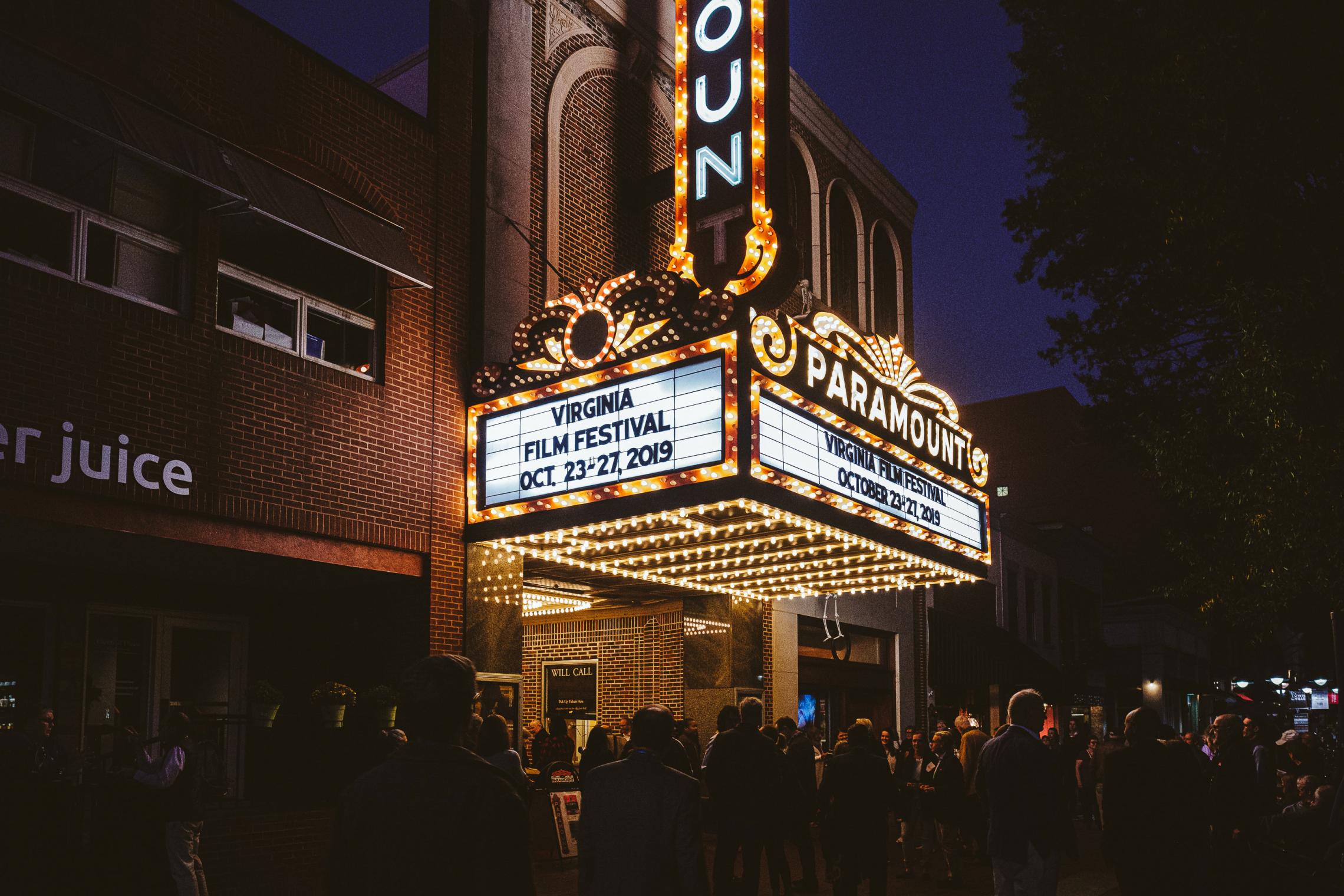 Introducing the Virginia Film Festival this year gave University of Virginia President Jim Ryan the opportunity to talk about one of his personal heroes.

Taking the Paramount Theater stage Wednesday night to help kick off the festival – a program of the University and its Office of the Provost and Vice Provost for the Arts – Ryan spoke about lawyer Bryan Stevenson, founder of the Equal Justice Initiative and subject of the festival’s opening night film, “Just Mercy.” The festival will run through Sunday. 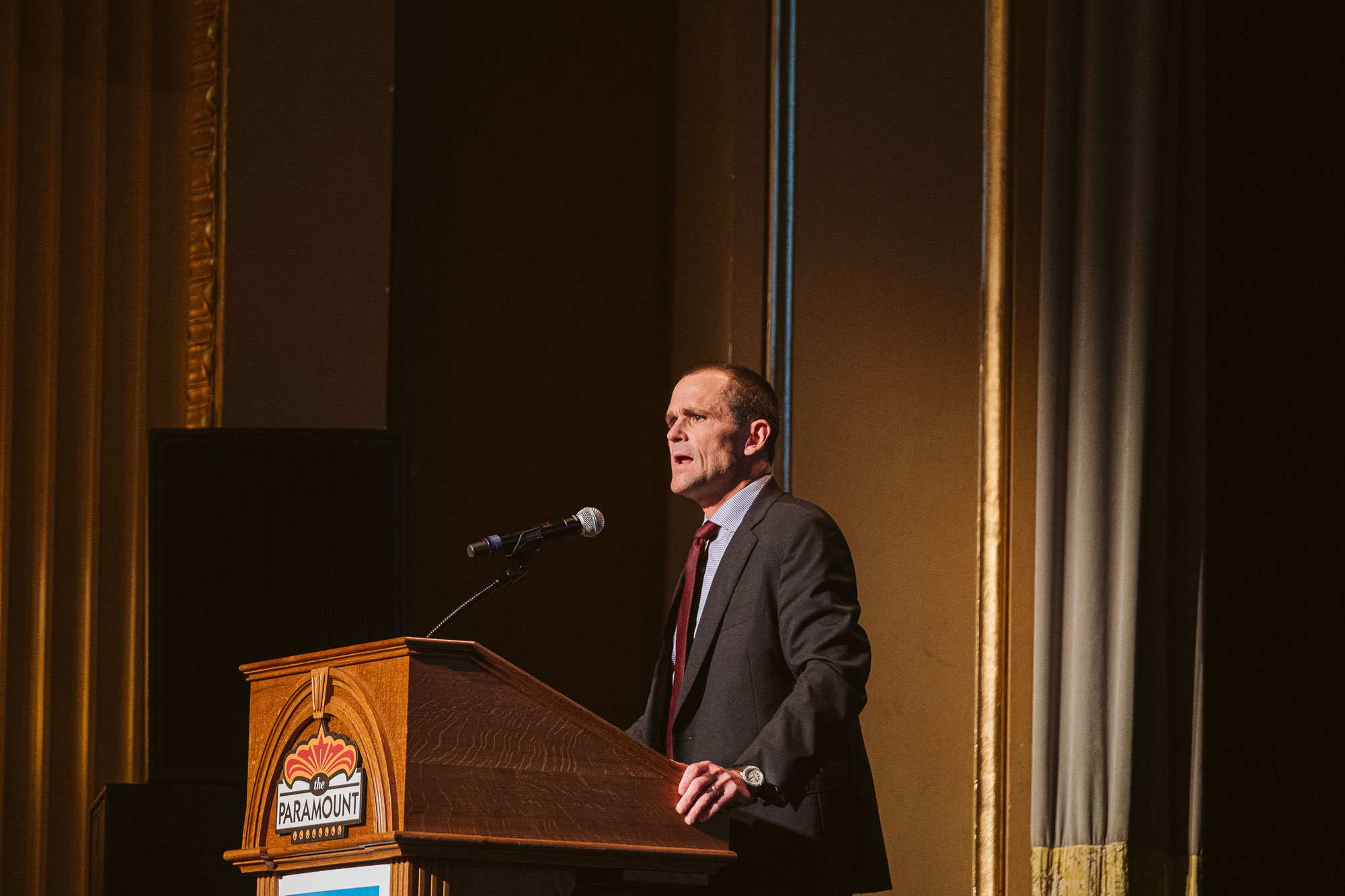 Stevenson, a Harvard University-educated lawyer now directing the Equal Justice Initiative in Montgomery, Alabama, has dedicated his career to helping the poor, incarcerated and condemned, including many prisoners on death row. He also founded the EJI’s National Memorial for Peace and Justice, honoring victims of lynching in the United States. Last year, UVA staff and faculty were among 110 Charlottesville residents who visited the memorial and delivered soil from the Albemarle County site where John Henry James was lynched in 1898.

“Just Mercy” focuses on one of Stevenson’s earliest victories: the case of Walter McMillian, a black man from Monroeville, Alabama, who was wrongfully convicted of murder and sentenced to death. Stevenson fought for and secured his release in 1993 after McMillian spent six years on death row. 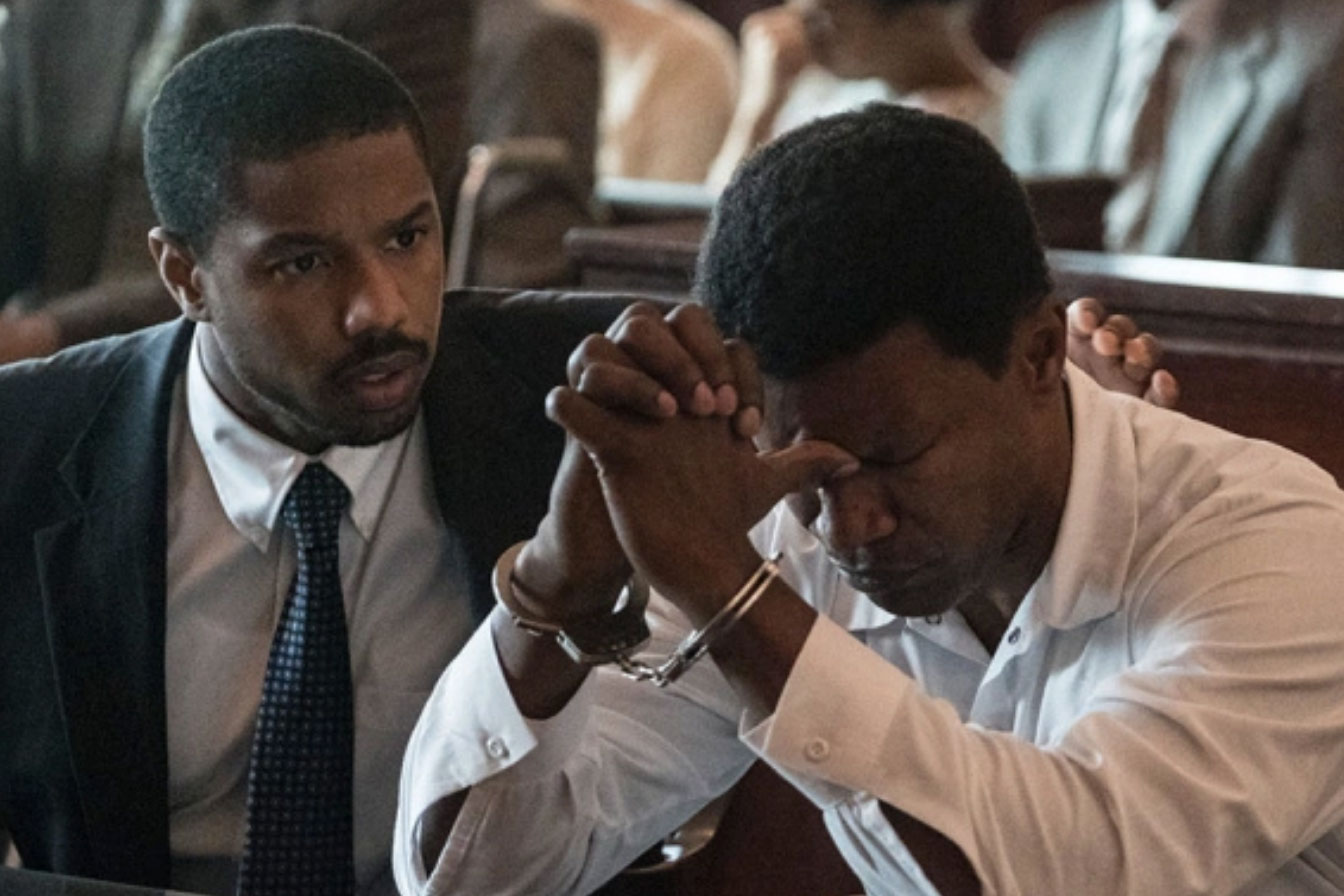 Addressing the capacity crowd, Ryan – who graduated from UVA’s School of Law and served on its faculty for 15 years – said Stevenson “embodies and expresses our national conscience” and why Ryan wanted to go into law.

“When I was in high school, I decided that I really wanted to be a lawyer when I learned about the civil rights movement and the remarkable lawyers who were a part of that,” Ryan said. “To me, the work that these lawyers did was not just courageous, but noble – appealing to the better angels of our nature and of our laws. They met resistance, but that retained their faith in justice, even when the legal system seemed stacked against them. These lawyers became my heroes, and Bryan Stevenson is a modern-day version of these tireless advocates and visionaries for justice and empathy.”

The film, starring Michael B. Jordan as Stevenson and Jamie Foxx as McMillian, lived up to Ryan’s introduction, alternately eliciting gasps and awed silence in the crowd as the characters faced down innumerable obstacles and persistent racism in their fight to save a man’s life. 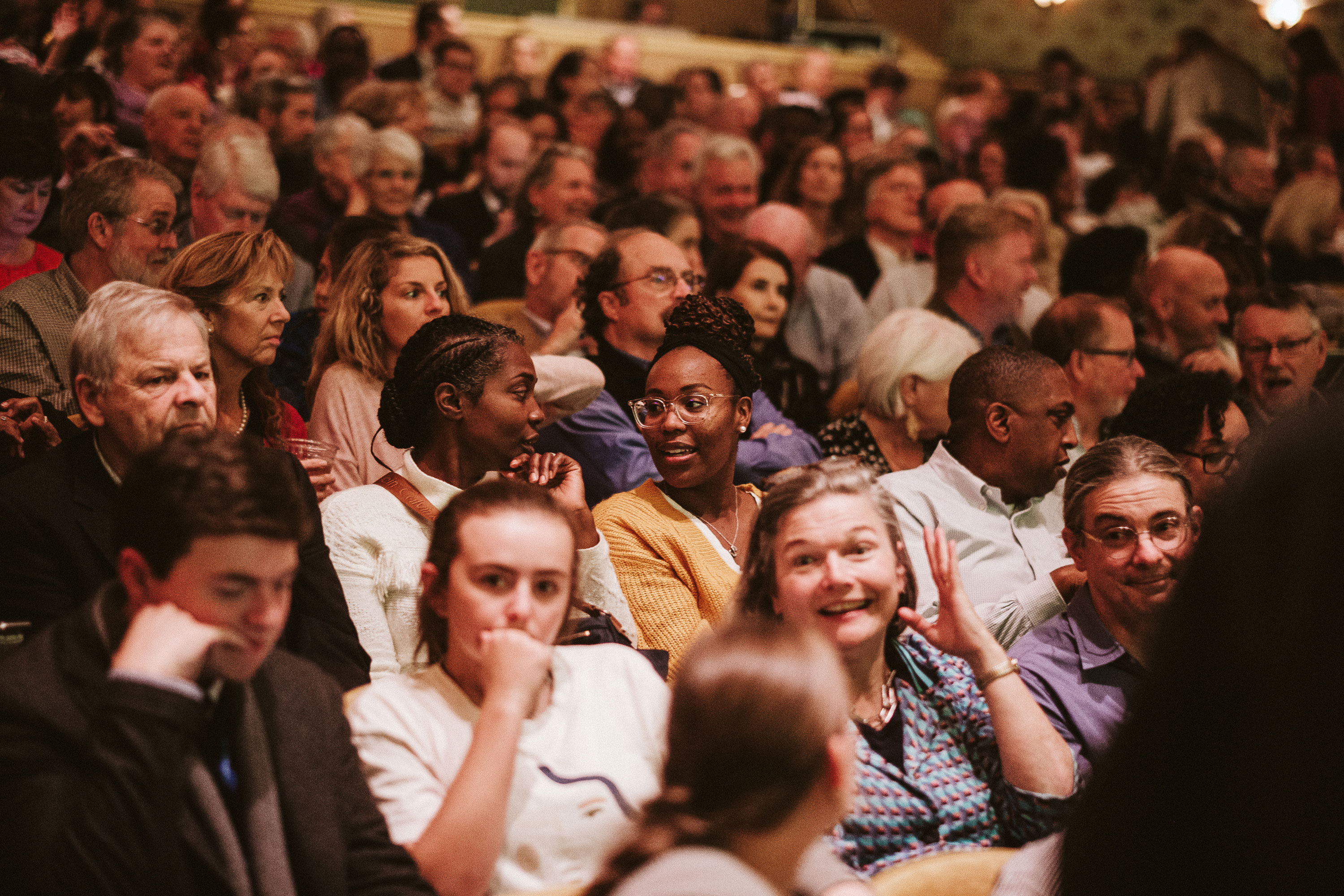 It will be the first of many such moments this week and weekend, as the festival continues through Sunday. Speaking before Ryan Wednesday, festival director and UVA Vice Provost for the Arts Jody Kielbasa previewed a week of thoughtful discussion and cinematic thrills with more than 150 films that represent “the very best in cinema from this year’s festival circuit.” (See a full festival preview and schedule.)

“Our festival includes a strong lineup of international films that have won awards from the top festivals around the world, insightful documentaries, fun and quirky independent films and a number of films that will be frontrunners for Golden Globe and Academy Award nominations,” Kielbasa said. 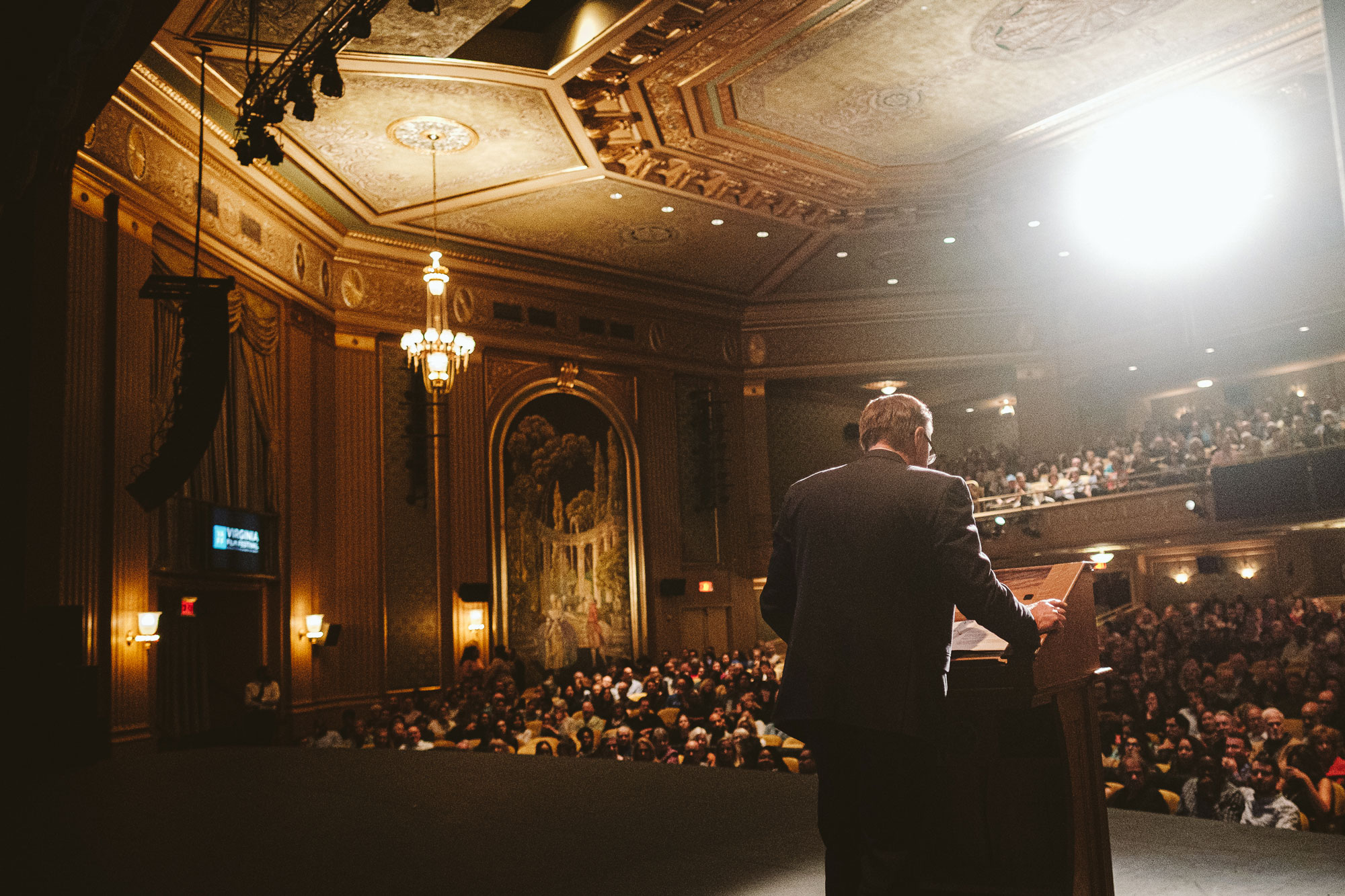 Ryan praised the festival’s ability to build bridges in the community, a theme that he has emphasized in his first two years as president.

“As you may know, we have made bridge-building a central theme for all of us at the University of Virginia, and we are encouraging faculty, students and staff to connect with new people, new experiences and new ideas in the hope that this will broaden their perspective and deepen their understanding,” Ryan said. “I mention this because the Virginia Film Festival has been building bridges for the last 32 years. Each year, the festival links us with artists, with issues and with experiences that allow us to see the world from new perspectives, and in the process perhaps understand each other and the world around us a bit more.”

Big kudos to Jody Kielbasa, Vice Provost for the Arts, and his entire team as we kickoff the 32nd year of the @VAFilmFest. Now, in to see #JustMercy at The Paramount in what I know will be a powerful film about one of my heroes, Bryan Stevenson. pic.twitter.com/2wEOk3BgRH

Earlier Wednesday, more than 500 middle and high school students assembled at the Paramount Theatre to watch “True Justice: Bryan Stevenson’s Fight for Equality,” an HBO documentary on Stevenson. Both films were part of the festival’s “Race in America” series, presented with James Madison’s Montpelier. The series explores questions of race through films like “Just Mercy” or “Harriet,” a highly anticipated film chronicling the life of Harriet Tubman that the festival will screen Saturday night.

For information about the festival, including a full schedule and ticket information, visit virginiafilmfestival.org. Tickets are also available at the University’s Arts Box Office in the lobby of the UVA Drama Building (open weekdays from noon to 5 p.m.), at the Violet Crown cinema on the Downtown Mall, or by phone at 434-924-3376.

A Year We Will Never Forget: 2019-20 in Review END_OF_DOCUMENT_TOKEN_TO_BE_REPLACED

‘What Will You Carry With You?’ Remarks From UVA President Jim Ryan END_OF_DOCUMENT_TOKEN_TO_BE_REPLACED